You can’t force someone to eat.

Even if they are dealing with some sort of eating disorder, you can only try to help them or be there for them. After all, it’s always the individual themselves who should want to get better. However, this is a different story. This woman apparently just loves to butt into other peoples business. You see, she saw that one of her co-workers was quite thin, so she decided to make him a home-cooked meal. Now that sounds like a pretty nice thing to do right?

Although when he refused politely, she kept forcing him to take it. And kept bringing meals everyday even though he specifically asked her not to do that. If someone asks you not to do something, you would usually stop right? Not this woman. He even went to the boss, but she was no help either and chalked it up to ‘being related to her pregnancy’ or some bull like that. So what is a person to do in this situation?

He even goes on to explain why he can’t eat her home cooked meals. Not that there has to be a reason behind it.

He is well aware of his health issues and is even going to the doctor. 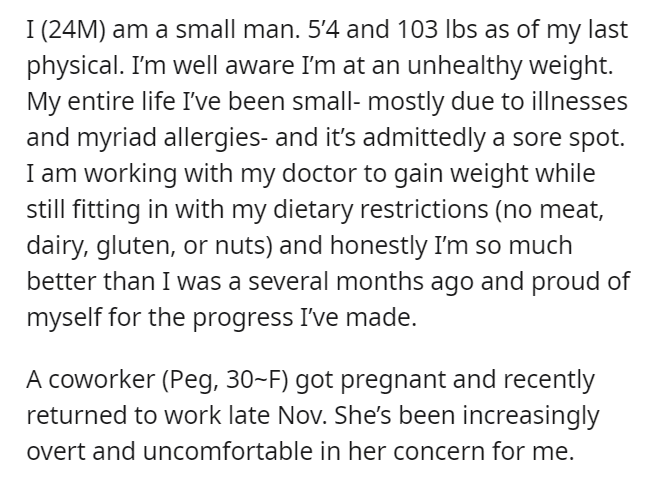 He told her that it was nice, but he didn’t want it. 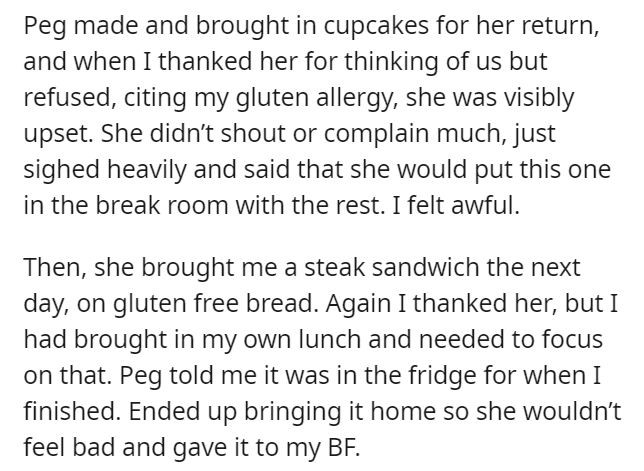 But all of his requests fell on deaf years as she continued to do whatever she wanted. 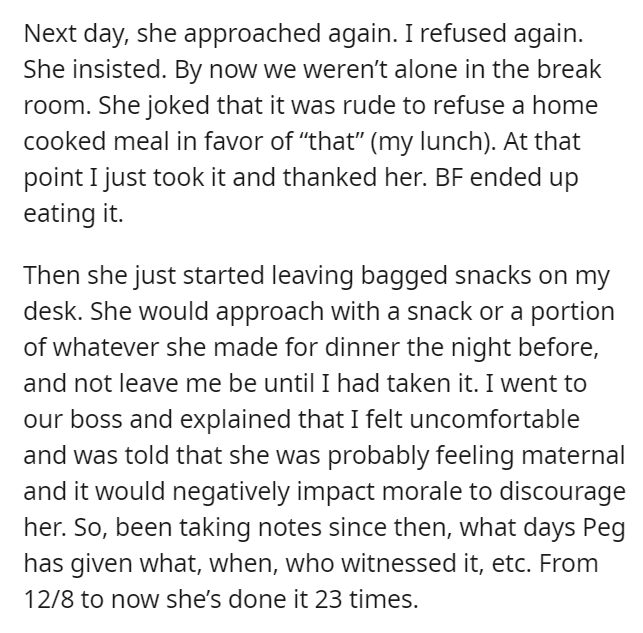 And that is when she became extremely rude and insulted him.

Honestly, she started it first. She was acting childishly in this scenario. 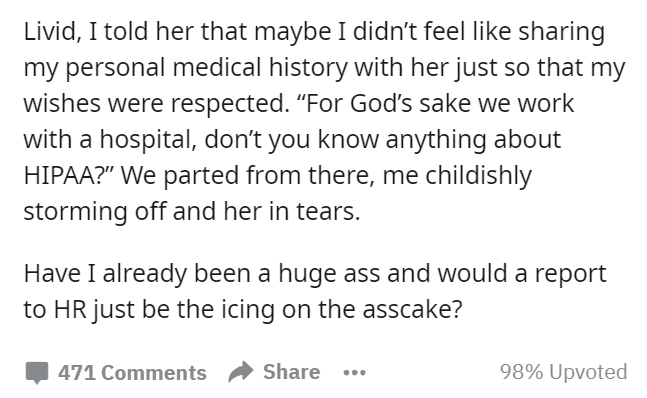 ESH. She should not have been trying to feed you as it made you uncomfortable and was inappropriate, but she obviously is concerned about you. You should have approached her much earlier and squashed your beef. Instead, you came out of nowhere and shocked her with a huge confrontation.

You’ve definitely burned your bridge with this woman and possibly your other co-workers. If it were me, I would sit down and have a chat with her and smooth things over before you start an office war. Also, keep HR out of it. Completely unnecessary, and you may find that if you go to HR, she’ll file a “disrespectful workplace” against you. –TheRealWheatKing

He gives a little more information as to what really happened. 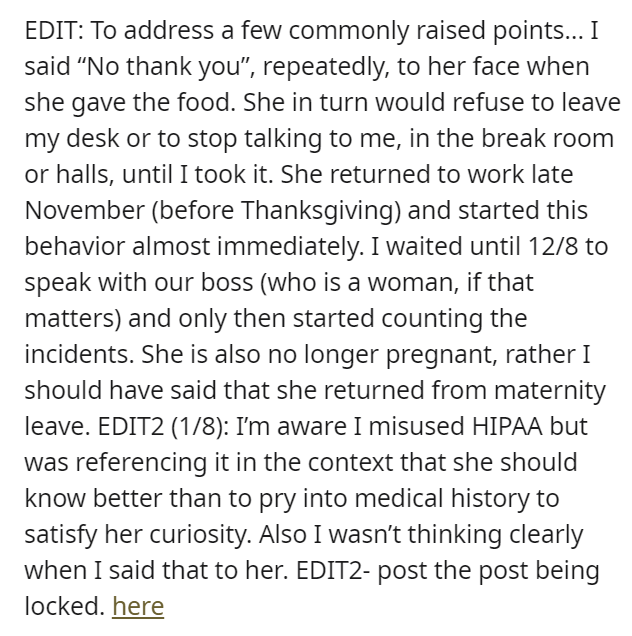 The boss should have done something. 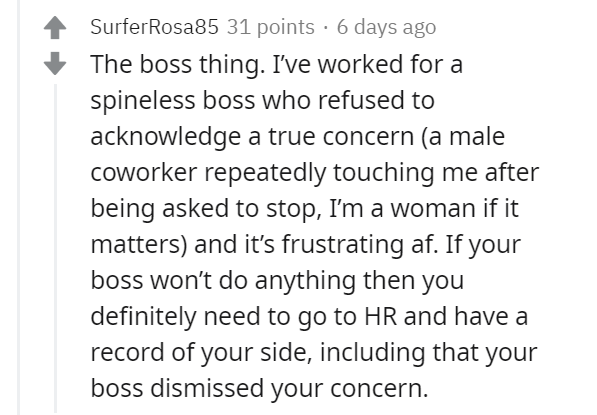 I would say going to HR might be the only way to put this thing to bed. 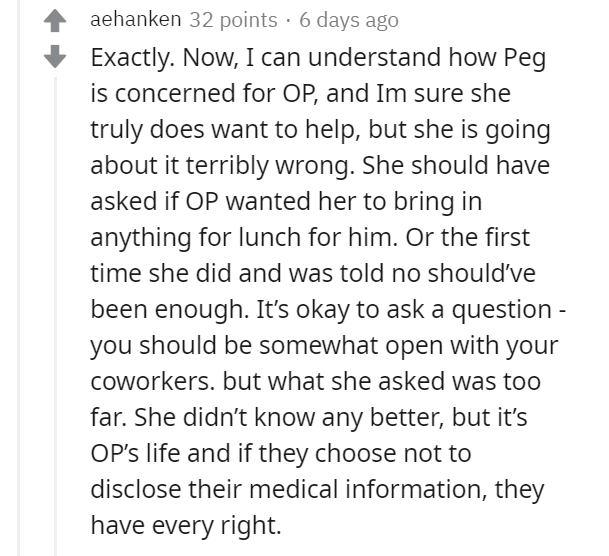 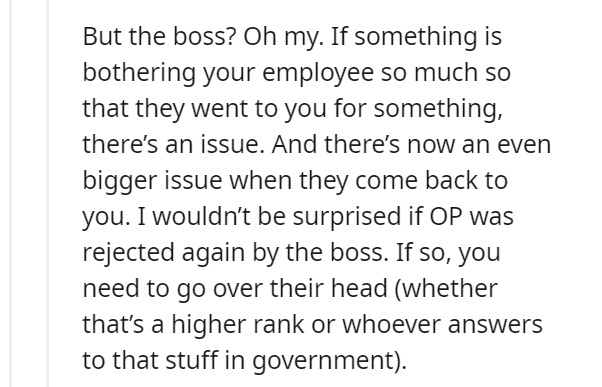 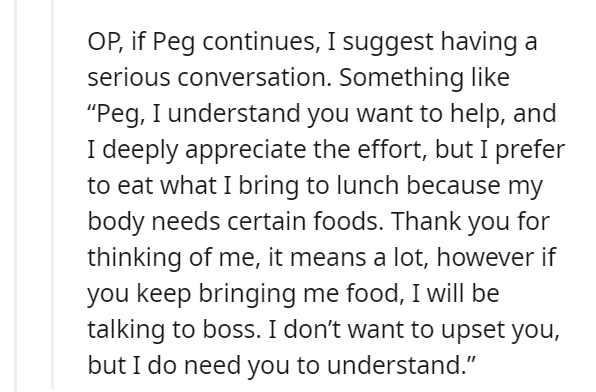 She did make him feel uncomfortable a lot of times, so a complaint needs to be filed. 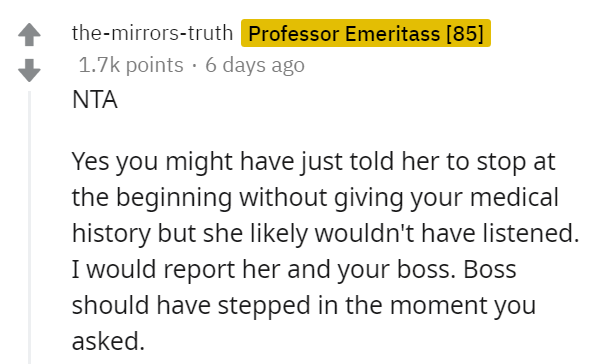 YTA, not because you’d be wrong in wanting it documented, but because you will have to double down on it to explain why you didn’t accept your boss’s decision to not intervene. And once you do that, and it does get past the stage of your boss saying it’s not a big deal, HR is not just going to not follow through with disciplinary action and let it lie.

So, consider well whether this is worth her job or not. Your boss being most at fault of all here. But I see no way to escalate without it ending up with everybody losing. Unless you think I’m very wrong about that and have high regard and trust for your HR team, you’d be the asshole for doing it anyway. Well intended transgressions without dire consequences don’t deserve that kid of punishment. –FeckingAwesome

Her logic is beyond me. And the pregnancy has nothing to do with this at all. 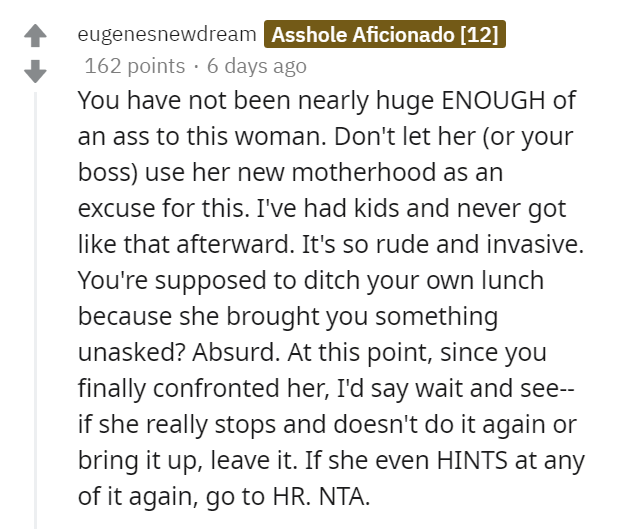 What do you think about this? Do you think she was only trying to be nice or did she take it too far? Let us know in the comments below and don’t forget to share.