Since childhood, our brains have been fed with the lie that dogs are always preying on cats. We are being told that cats and dogs are each other’s worst enemies and they do not care for each other. We have seen cartoons where the cat is always running away from the dog to save its life, and the dog is always scheming to somehow eat the cat. This is why we always find it shocking when we see a dog and cat being friends. It comes as a shock because you can still expect the two to be civil, but to be friends and care for each other is something many people don’t even fathom.

This misconception is also aided by all the posts online that show cats and dogs as rivals. People share stories of their pet dog and cat not getting along, and fighting whenever they are together. While people enjoy continuing this narrative, there are adorable stories of dogs and cats being each other’s friends and helping each other out. Those stories warm your heart and make you feel like there is nothing wrong in the world. I mean, if two creatures who are perceived to be enemies can be friends, anything can solve, right?

A woman from turkey caught the heroic act of a dog on a video. He became the hero of the day as he saved a cat from drowning in water. Scroll below to find the video and details of the incident!

The dog spotted the poor cat struggling to get out of the water. 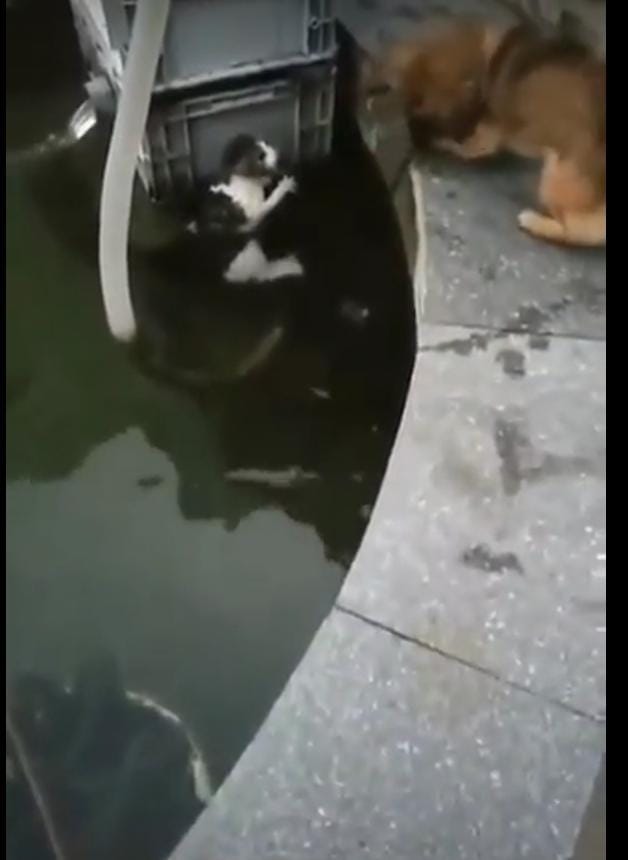 The poor cat fell into the water without being noticed. She was found by the dog crying and meowing loudly for help. 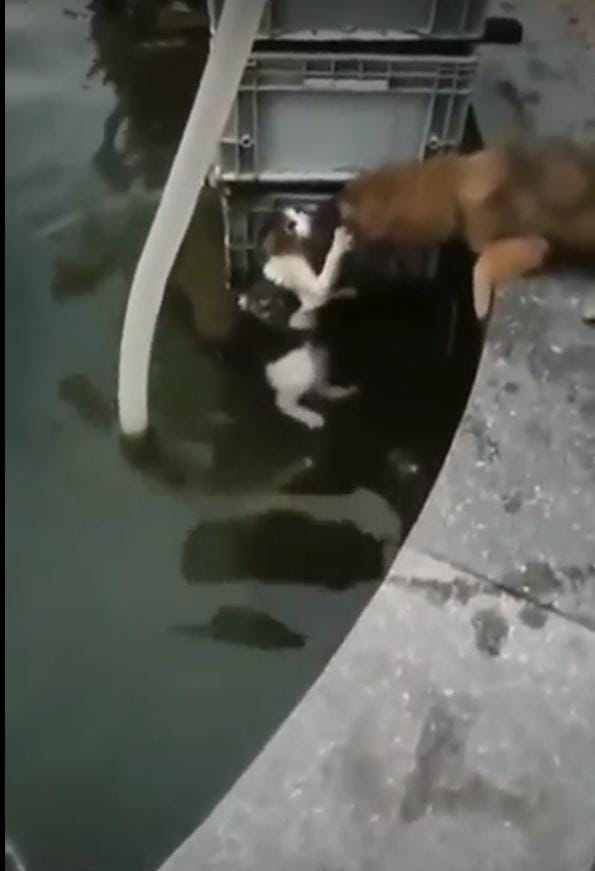 She tried to grab the dog as soon as the dog approached her. 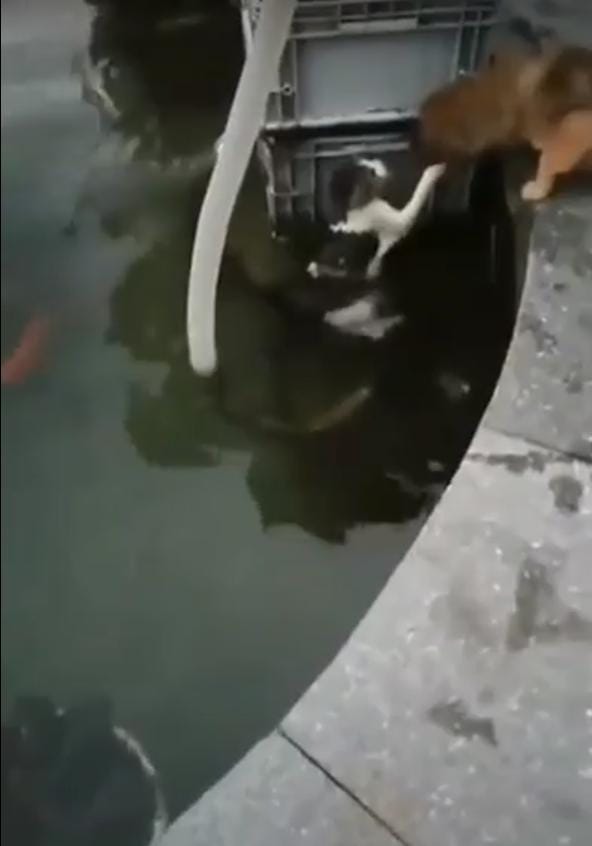 The cat was finding it very hard to climb up to the pavement. The dog kept on coming closer to the cat so she can grab him and hop out of the water,  but the cat was unable to. Realizing that the cat would be needing more help, he jumped into the water! Yes, he did that. He was not going to let the poor cat drown in the water.

The dog courageously jumped into the water because the cat was finding it hard to jump while he was on the pavement. What a gentleman! 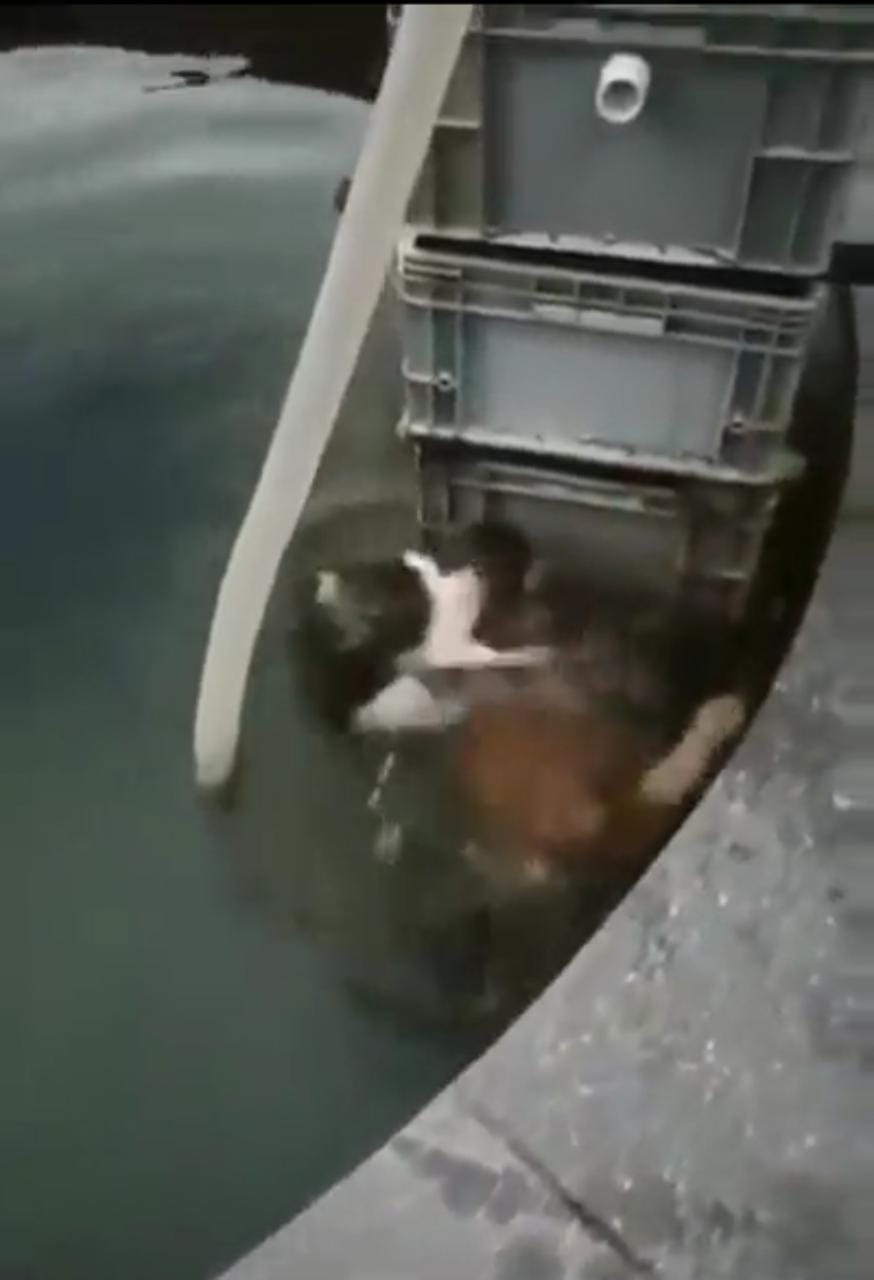 Finally, she hopped onto his back within a second and was out of the water. 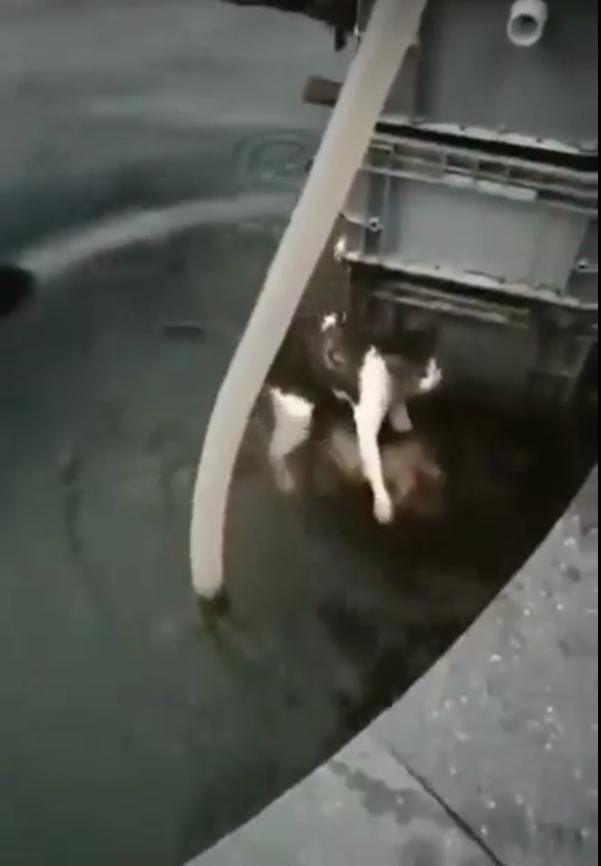 My heart goes out for this brave dog! He has a big heart for going out of the way to save the cat. 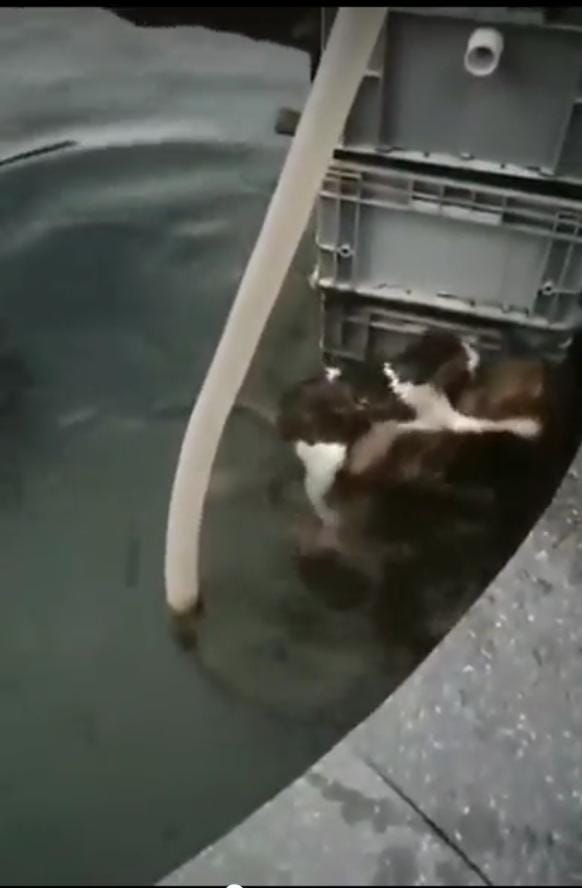 He takes the cat closer to the pavement so she can jump off him. 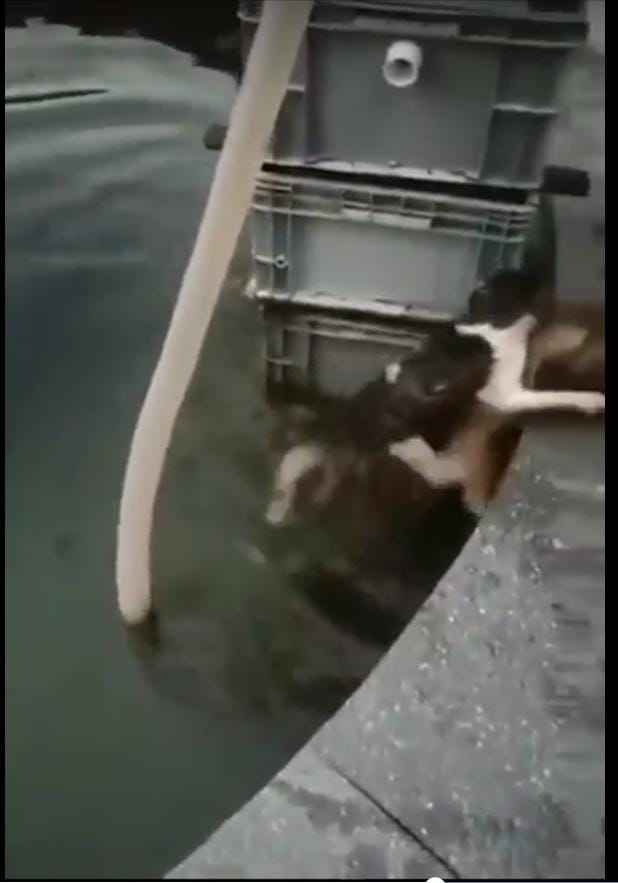 The cat was finally out of the water and safe! 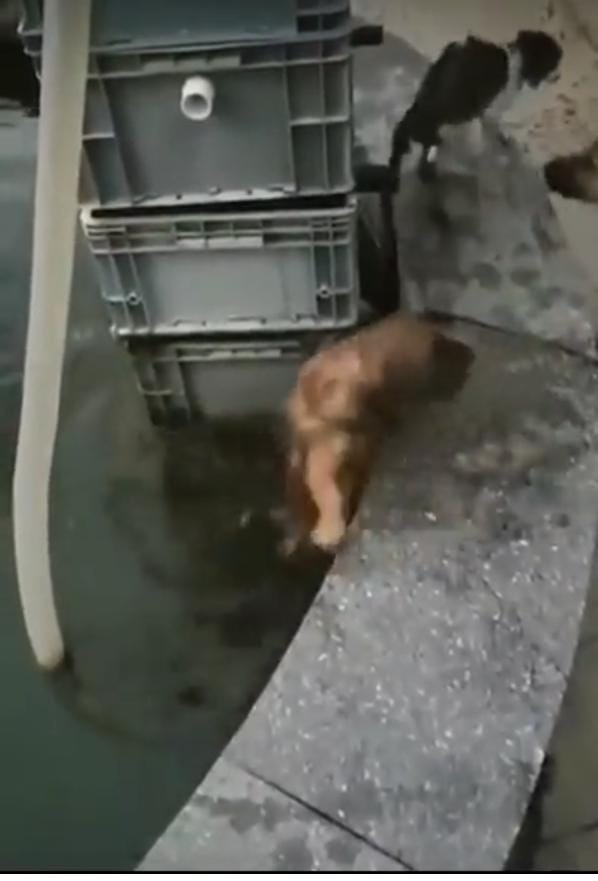 Both our favorite munchkins made it out safely! 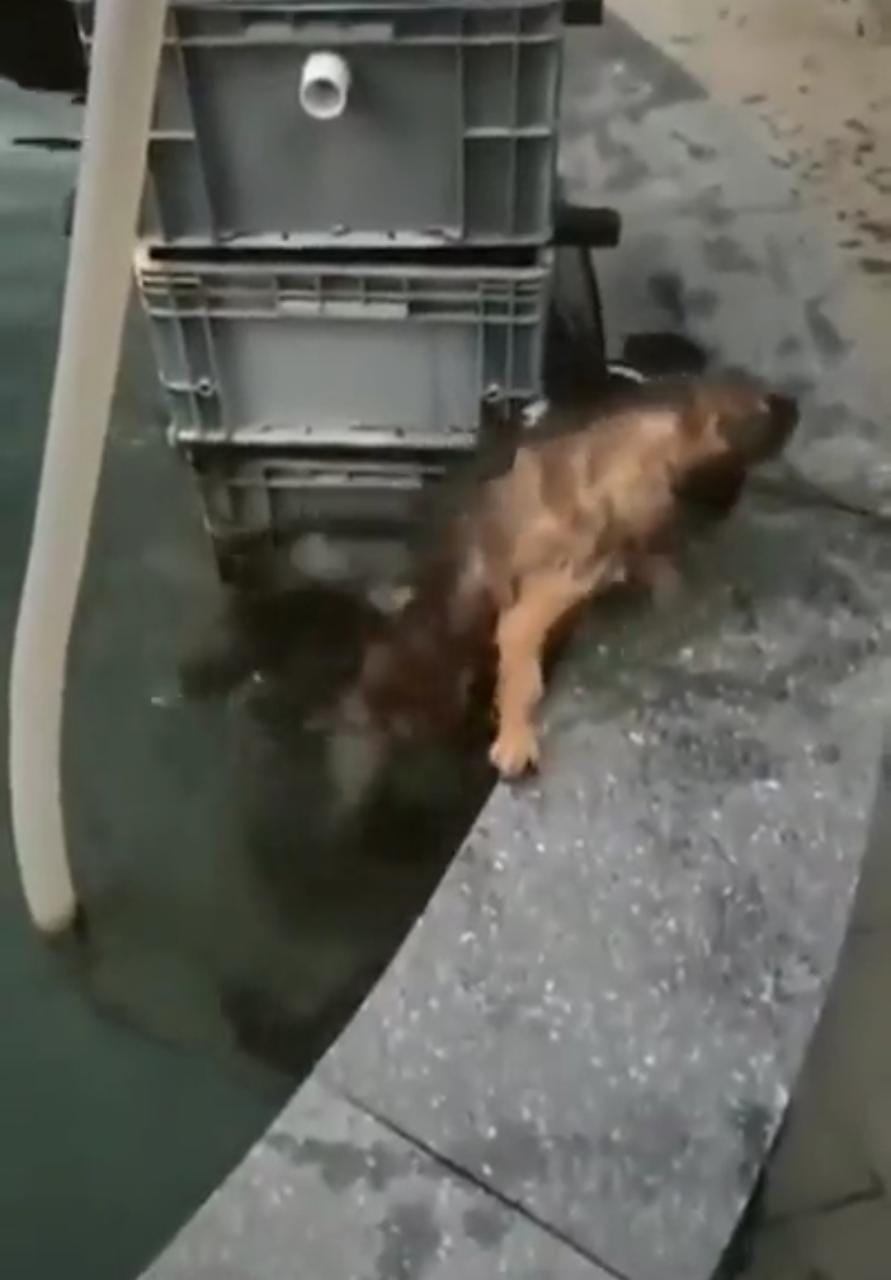 This is the complete video of the dog saving the helpless cat from drowning. Grab tissues because this is the sweetest video ever!

While we all are glad that the cat got saved, some people were pissed at the woman who made the video.

They were angered by the fact that the woman preferred making a video instead of helping the cat. It is a valid point!

Some other people had different thoughts about this.

That is a silly thought!

The cat could have easily drowned and there was no guarantee that the dog would save the cat. This was not the time for these animals to learn a “lesson”. It was the matter of life and death. The woman should have dropped her phone and saved the poor cat.