This is the motto that we all should live by. And while I am not saying there is something inherently wrong with pet stores, you have to admit there are so many stray cats that need a home. I know they may not be your desired breed or color but who cares about that? I guarantee they will love you much more than a spoiled kitten from a store.

And you will also get to see a beautiful transformation of a stray to a beautiful house cat if you provide them with enough love and care. There are so many organizations in the world dedicating a lot of effort to this particular cause and we should help as much as we can. And to promote adoption and rescue, we have compiled a list of some of the most amazing transformations before and after pictures.

#1 This is Justin and he survived a fire.

Shelter Found A Box Of Kittens With Only One Living But Blind Survivor. 6 Months Later, She Is Healthier Than Ever.

#3 All the wounds from electrocution healed.

Bunny Was Found With Many Wounds After Being Electrocuted. Here He Is A Few Months Later.

Mr. Biscuits Tried To Get Warm In A Car Engine And Was Burned Badly When The Car Drove Away. Now He’s Recovered.

#5 A month can make a huge difference.

#6 He deserves all the happiness.

Louie Was Found Abandoned In The Gutter Just Two Weeks Old. Now He Is The King Of The House. 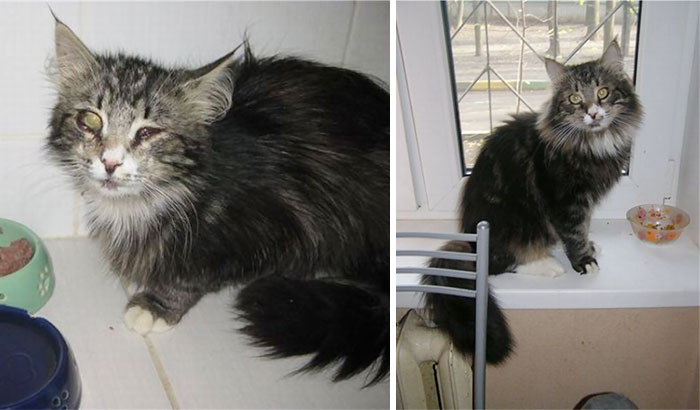 Kodama Was Found With A Maggot-Infested Wound. 6 Years Later, She Is Happier Than Ever.

#9 She has found her utopia.

Little Kitty Was Found Drenched In The Cold Rain. Now Utopia Has A Loving Home.

#11 Stuart Little is all healthy now.

#12 Before and after of 1-year difference.

#13 No more eye infection for Tyrion.

Duncan Was Found Injured In The Middle Of The Road. A Year Later He Looks Much Happier. 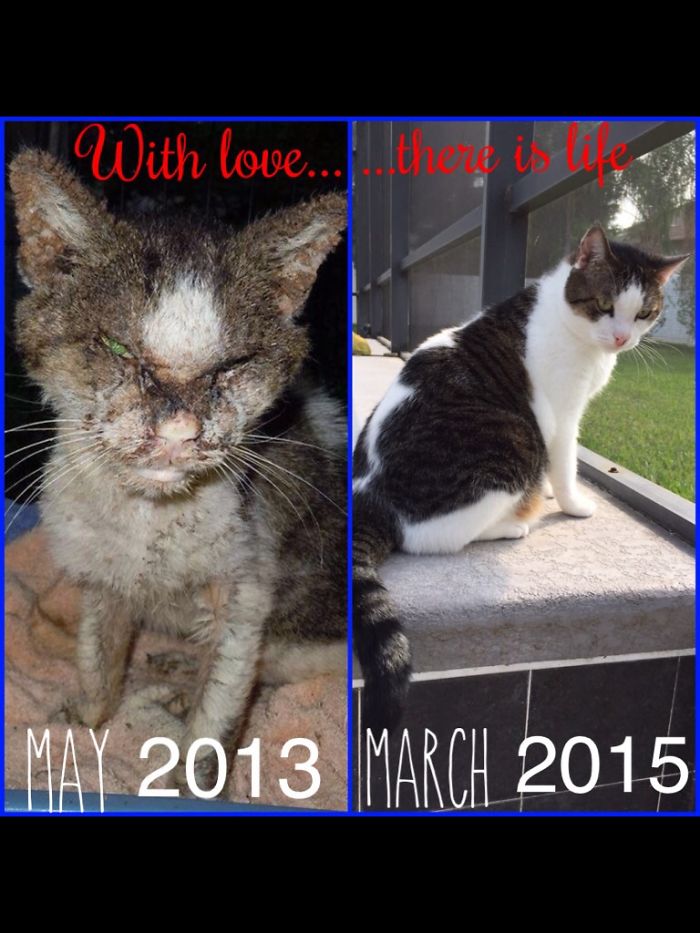 Bea Was Found Hit By A Car On The Side Of The Road. That’s Her A Month Later.

#19 No dumpster could hold her.

Eleanor Was Found In The Dumpster Severely Injured. Now She Is A Happy House Cat.

#20 A happy ending for this kitty.

#21 Was looking for food, found a loving home. 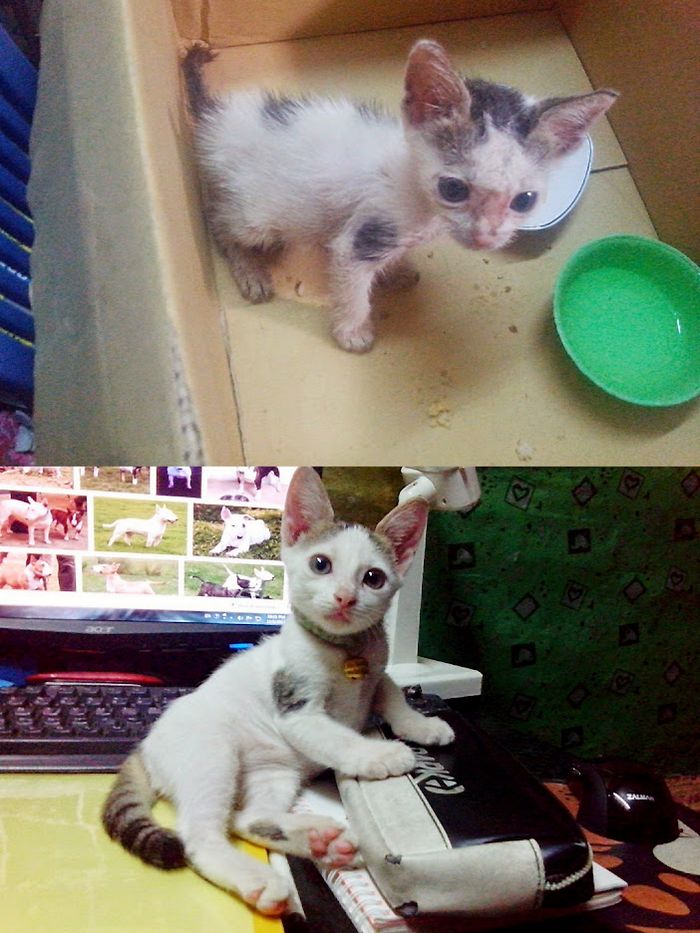 Penguin Looks Much Better Just A Week After Being Rescued.

Oliver Was Rescued From Awful Owners. Just 12 Weeks Made A Huge Difference.

#24 Another stray has found a forever home.

#25 A nice hot shower can change one.

#26 He looks much calmer after.

Lionel, An Injured Stray Cat Two Months After He Was Found.

#28 Those long legs are beautiful. 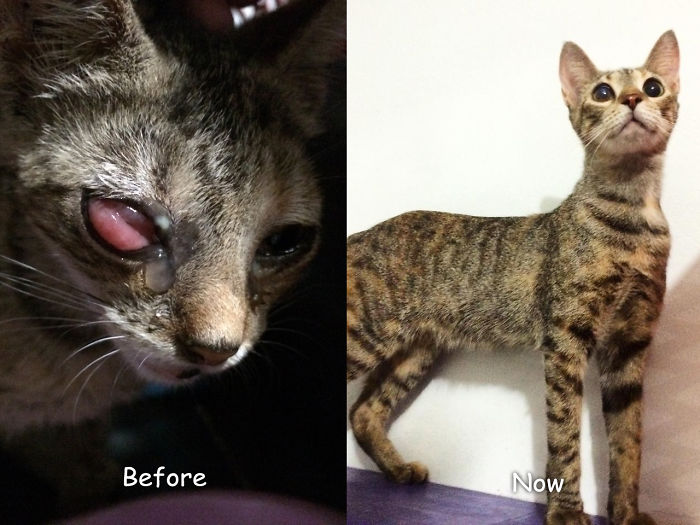 #29 Even the fur has grown in nicely.

Little Kayle Was Found Inside Neighbor’s Car’s Wheelwell. Now She Is Happier Than Ever.

Tommy Had Been Poisoned, But He Was Found On The Street And Slowly Became Better. 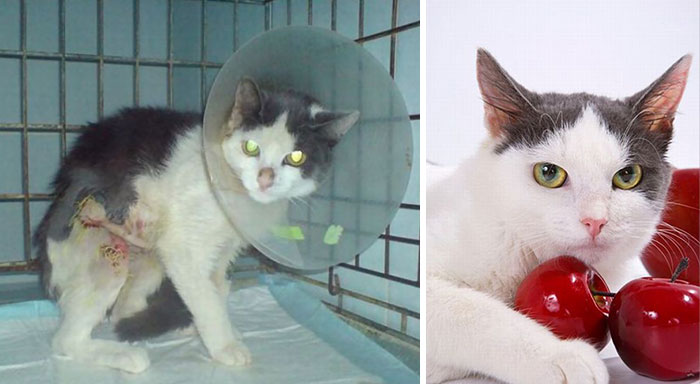 #33 What happened to the other cat?

#34 I never understand why people throw away cats.

Bacon Bit Was Found In The Trash With A Jar Stuck To Her Head. Now She Has A Forever Home.

Kitty Was Abandoned After Her Owner Was No Longer Alive, Now She Has A Loving Home.

Arwen – The Day We Saved Her, Abandoned In A Basement, And 1 Year Later – Stunningly Beautiful!

Poor Cat Was So Thin She Only Weighed 4 Pounds. Now She Is Round And Happy.

#40 How could anyone think he was ugly? 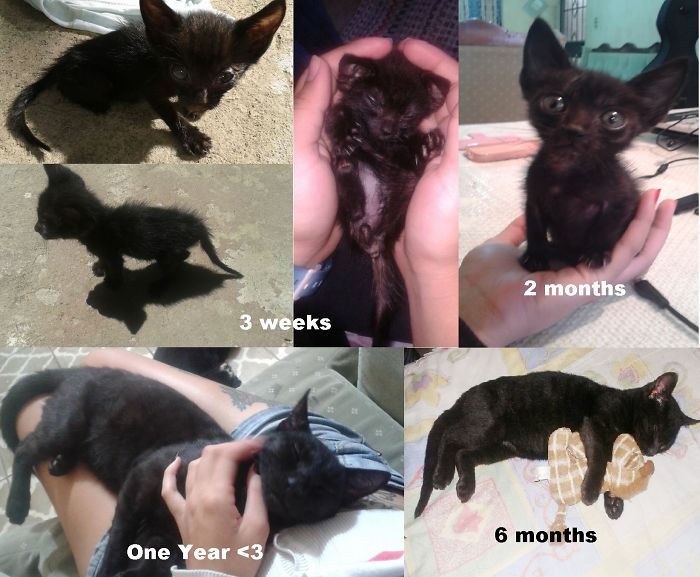 Nobody Wants To Adopt Him Because He Was Ugly, Now Kuro-chan Is Pretty Damn Handsome.

#41 Just look at those adorable eyes! 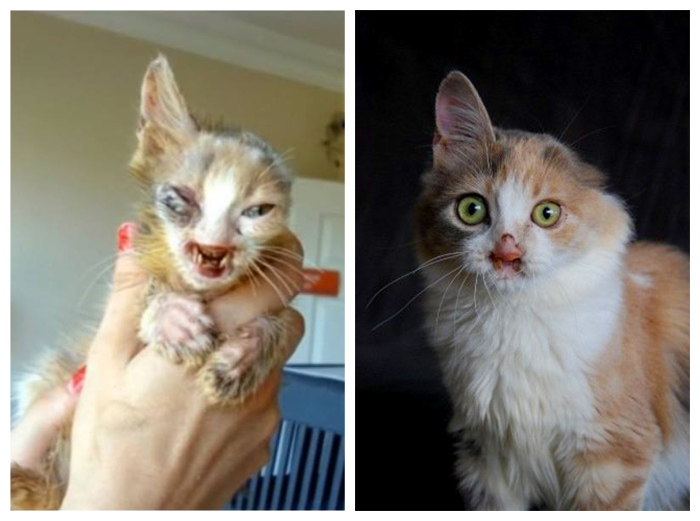 Gülümser (means “the One Who Always Smiles”) Was Rescued From A Garbage Container On Istanbul.

#42 She may be old but she deserves happiness as well.

#43 Tyrone has gone through a lot but he’s better.

Kitty Spent Endless Days Begging For Food On The Streets. Here He Is One Week Later.

#45 He couldn’t handle any more pain. 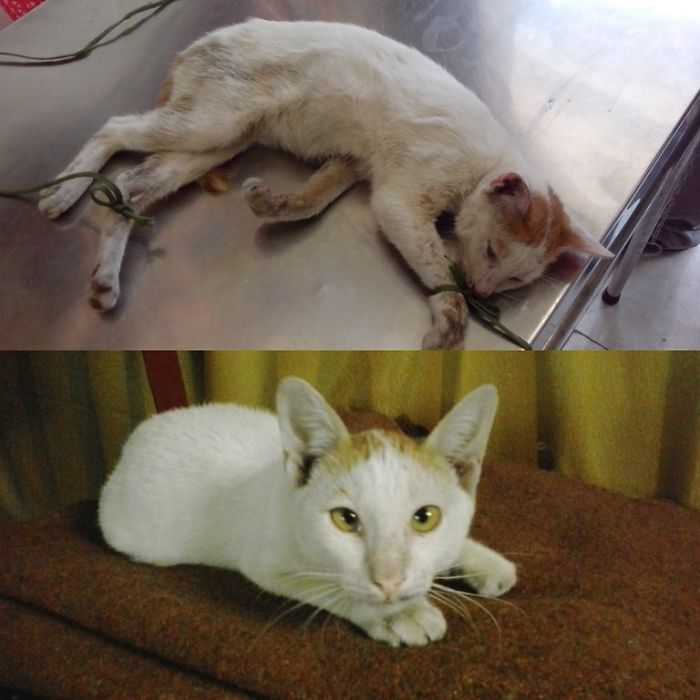 Naiver Was Found Hurt On The Street. He’s Now A Young Healthy Man Ever.

#46 We have the real Garfeild here. 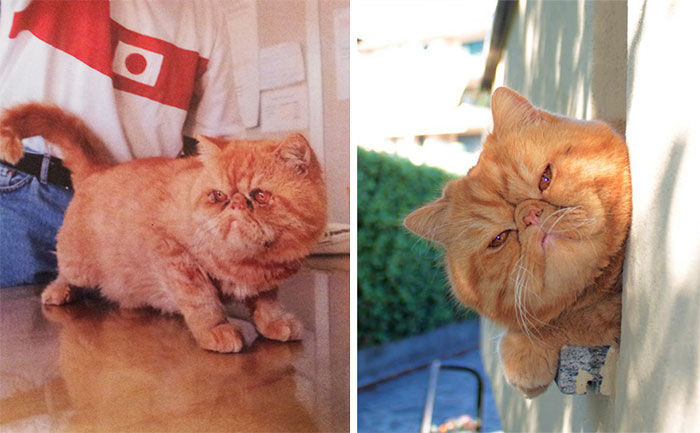 #47 Much more confident in the after picture.

#48 So much better in only a small time.

Cat Was Found Under The Stairs, Now He Looks Much Better. 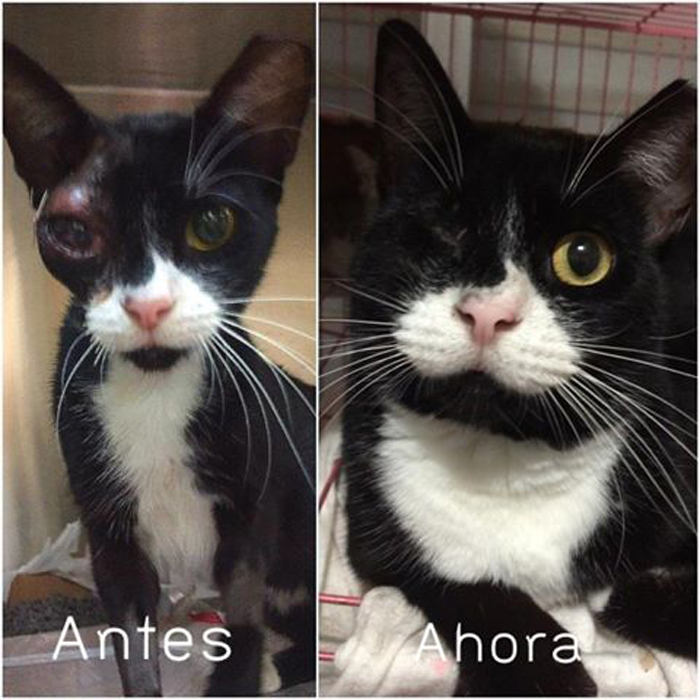 Our Buddy Found Us Almost Dead 3 Years Ago. Now We Can’t Imagine A Single Day Without Him.

What did you think of these before and after images? Do they make you wanna adopt and giving a cat in need, a loving home? Comment down below and let us know.