After that wild heading, you probably want some kind of explanation or justification that I’m overexaggerating. Unfortunately, it isn’t so. This is what happened, exactly as happened, and a woman on Reddit posted about it in a throwaway account to try and explain her worries and ask for advice. There’s a lot of different kinds of opinions and things going on these days, but seeing what other people are up to is always interesting.

What happened here is… Messy. And we’re not quite sure why it happened the way it did, but reddit users have interesting ideas. The husband, who she’s been married to for less than six months, started freaking out because his wife is a few years older than him, and is starting to show signs of aging. He probably has some form of mental illness, and that’s the most logical explanation. 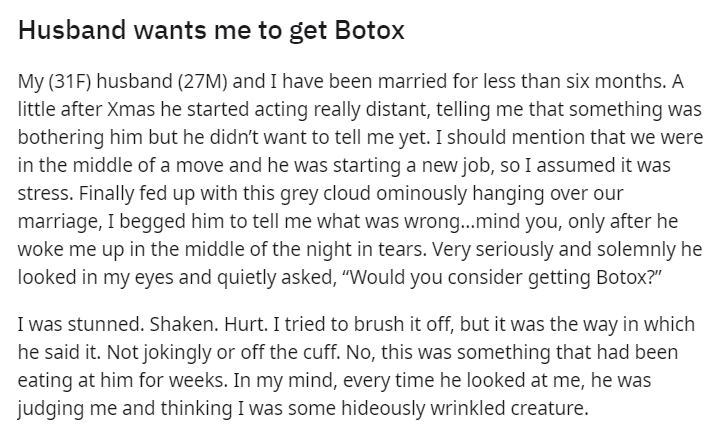 #2 What a horrible thing to say. 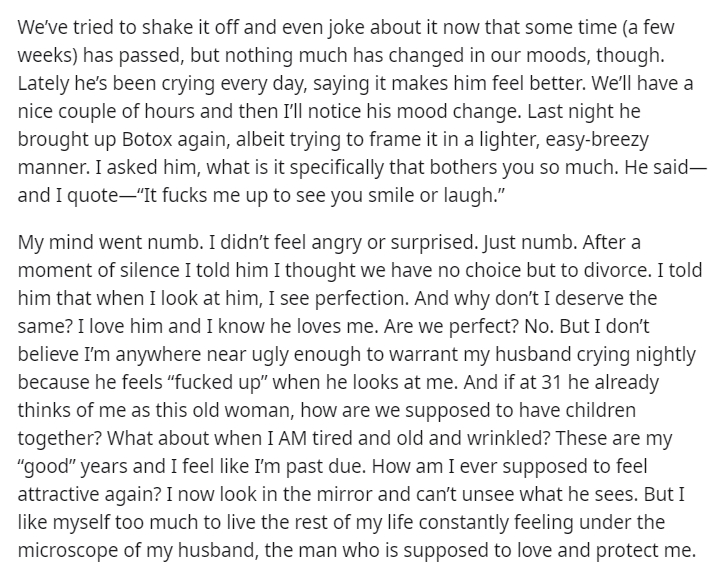 #3 Is it even possible to rebuild?

People had the following to say:

He keeps you on edge for months, wakes you up in the middle of the night in tears, cries every day, and hates seeing you smile and laugh. Because he wants you to have Botox? This. Is. Insane.

If this is real, I actually have a friend that went through Something like this. Her live in boyfriend got super distant and then told her one day “I’m afraid you will look like your mom.” Her mom, a wonderful lady, was much older than most moms because she had many children and my friend was the youngest. She was in her 70s and my friend was 24.

Her immediate reaction was to defend herself and reassure him, “I don’t think that’s going to happen until we are both in our 70s and 80s, etc. Plus I don’t want to have 6 or 7 children. Maybe 1.” He stopped obsessing (because that’s all this was. Something was wrong and he was having some sort of crisis about aging and he just sort of assigned it to this issue) but they later broke up anyway.

Months of alone time and self reflection on his part and he wanted to relindle things. She had to tell him that she lost all respect and affection for him the moment he said that to her. He showed her that he can’t control his depressive episodes enough not to dump it all on his partner with profoundly hurtful insults. I hope he learned his lesson. Believe he is still single 12 years later.

Anyway this is exactly what OPs husband is going through. He’s not getting help for this “quarter life crisis” and he’s freaking out about aging, the thought of her aging faster, and what people will think. Thing is no one cares, and it’s not really about these things anyway: he’s having a crisis and he needs to get help for the intrusive thoughts rather than entertaining them.