This is straight out of some kind of drama show, but according to this one redditor, it happened. And it wasn’t something small either. This couple met when they were 25 and 21 respectively, and have been together for eleven years. They even have twins together, but turns out, it was all a massive lie. Concocting this wild story about how his job requires him to stay three months away, he made up a reason for him to keep up the charade.

Except, he was busted when his other not-quite-wife (this will make sense later) found out about where he was spending all the money by following bank records, and she kept this a secret herself for three months because she also had a child with him. Reddit, obviously, didn’t think she was telling the truth, but the truth it was! And if it wasn’t, at least it was interesting to read.

#2 Jonas works in a branch. 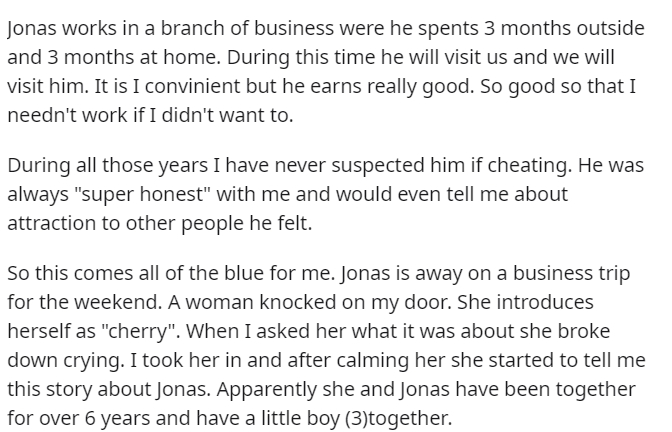 #3 Fooled by a horrible person. 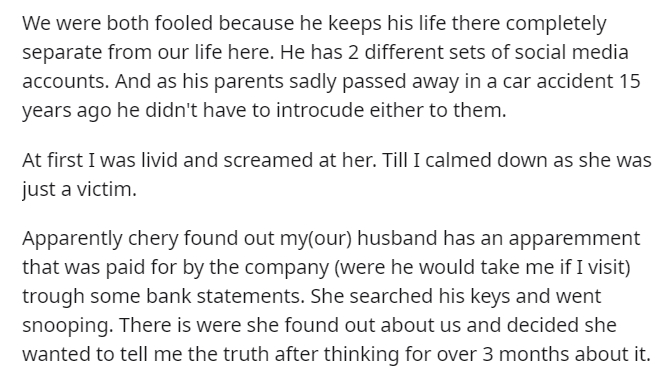 #4 Cursing Jonas and sleeping on the Couch. What a day.

They commented and explained:

Had a friends dad who did this for over 13yrs before getting caught, and as he was doing it between countries he managed to get legally married in both Countries.

To OP I watched how hard this was on my friends family when they found out about his dad’s “other family” and am truly sorry this has happened to you.

Please follow everyone’s advice and stay calm and cool until you’ve saught legal advice. Don’t let him know it’s coming until he’s been served. My friends mum did not do this and let’s just say it did not go aswell as it should have.

If this post is real, don’t do a damn thing. Your feelings are totally normal but anything perceived as vengeful can hurt you in court, from settlement to custody. Don’t do anything.

Call a lawyer immediately, make sure it’s a good one. Don’t move money around, don’t abandon the house, don’t tell the kids everything yet. It will be hard but you need to absolutely pause everything until you have an attorney’s advice.

The best revenge will be destroying him in divorce court.