Always be considerate of others.

That what everyone teaches their children. At least that’s what we think since there are so many people in this world who like to do whatever they want without realizing they are hurting others. And even when they do realize it, they continue on as nothing has changed. This can be especially prevalent between the relationship of in-laws.

There are bound to be some disagreements between two different families and there is nothing we can do about it other than compromising with each other. However, some in-laws like this mother-in-law would rather send her daughter’s husband to the hospital than cut back on the salt in the food.

I know it sounds like such a petty thing to do and I am surprised that someone would even do this but here we are.

Coming from someone who has dealt with high blood pressure, too much salt is never a good thing. 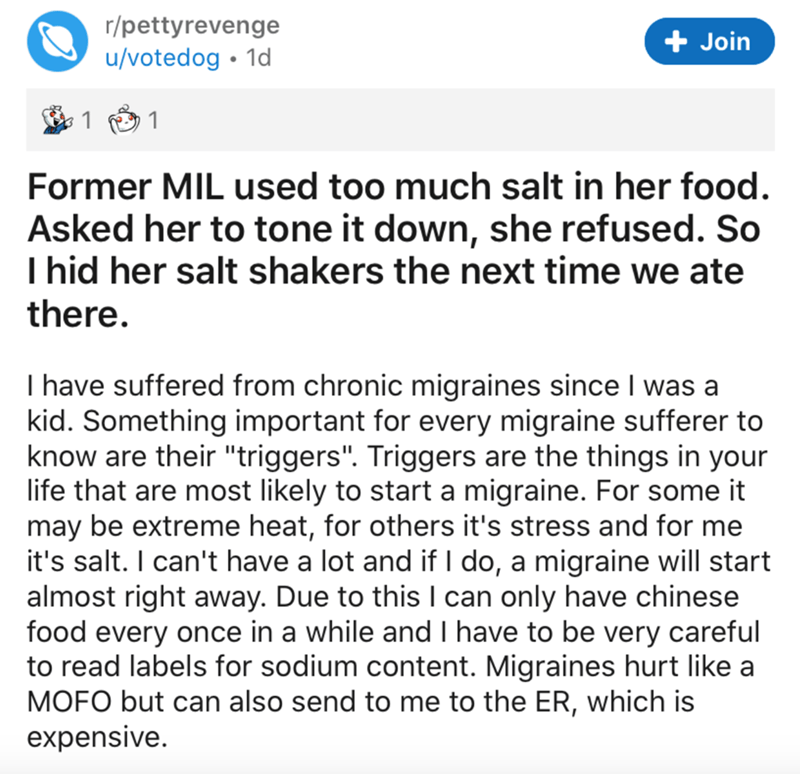 It should be an easy thing to do. They aren’t saying she should completely omit it.

But if someone doesn’t like it, they can always add more salt, can’t they?

This is what I call some petty revenge. 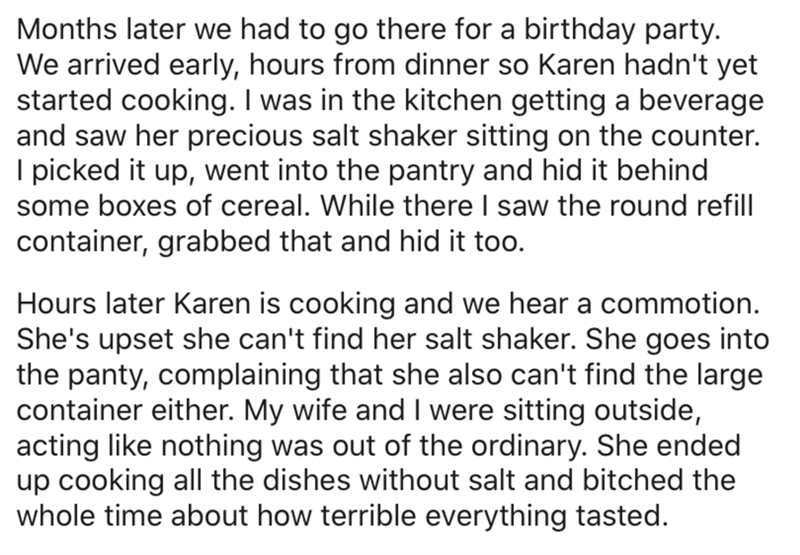 My mom has never added salt to any of her cooking in the past 20+ years because she’s weirdly concerned that butter and salt were too unhealthy. Even though I’m an incredibly picky eater and hate trying new foods, some of the foods she makes I actually do like. They got enough flavor because it’s already got enough sodium in it and/or because she uses other seasonings besides salt

So no, it’s not impossible for it to not have added salt and still taste good. Whatever the MIL was making, it was probably an already salted food item or she also uses other spices. –Raionmimi

I mean if everyone is saying it, she should listen to her guests more. 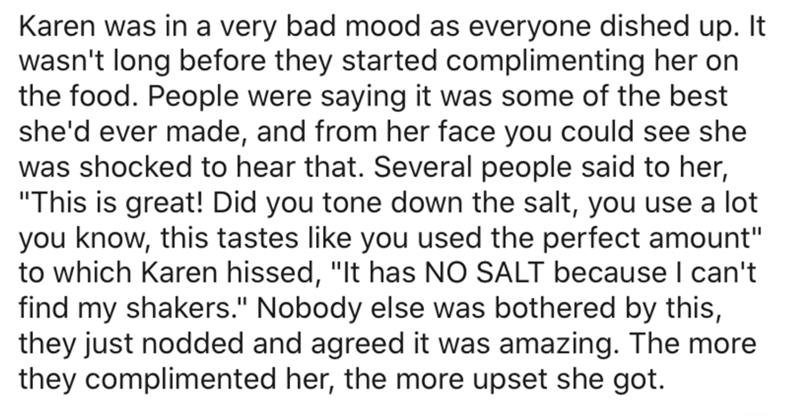 Perhaps the first and the only time because they ended up splitting later. 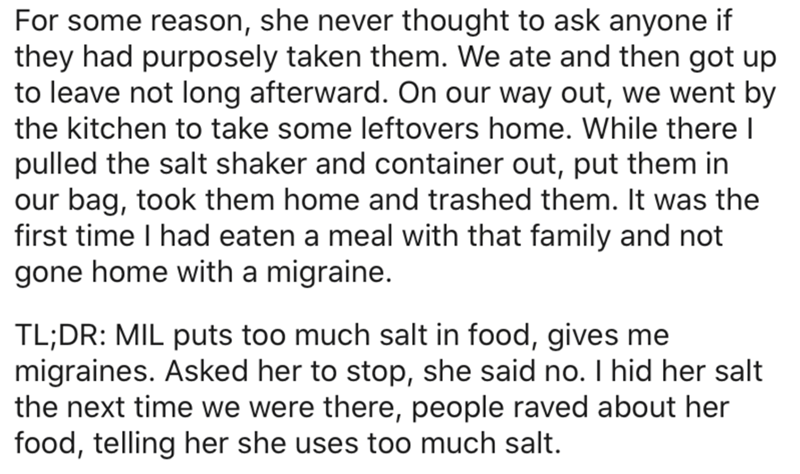 It doesn’t take that much effort to think of others. 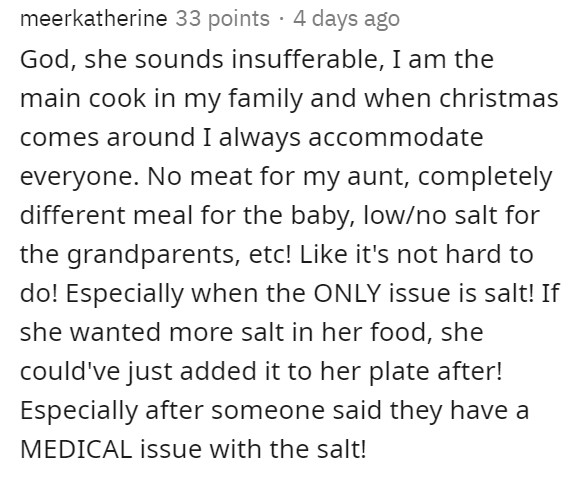 Exactly! It’s not like they are insulting your cooking. Everyone has a different palate! 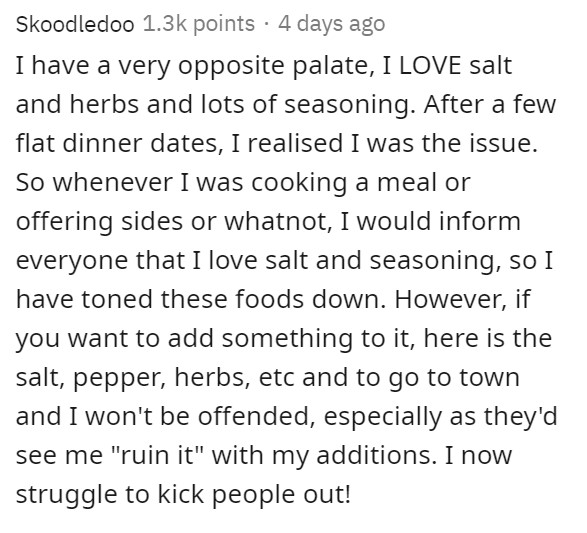 And who could forget the puns? 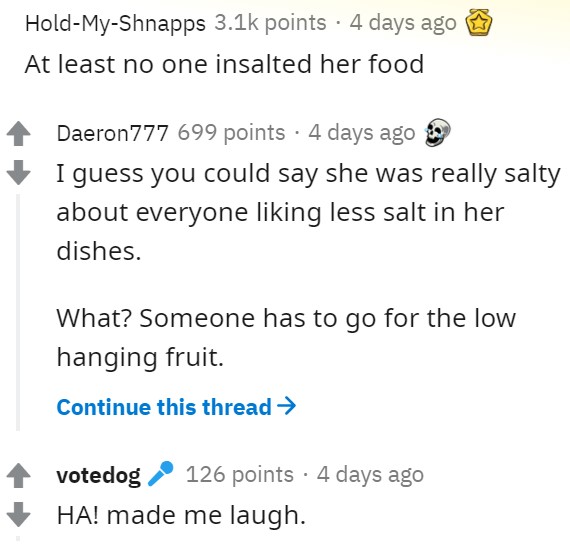 Have you ever dealt with a similar issue? If so what would do in this instance? Comment down below and let us know.