Karens are clearly quite stupid.

Now please don’t come after me if you are named Karen as what I am talking about are the women who act entitled and think everyone owes something to them. Well, I already knew that Karens were not only selfish, entitled, and rude but as it turns out, they are actually quite dumb as well. I mean who among us doesn’t know how franchises work? Even if an employee works at one Mcdonald’s, it doesn’t mean that they automatically work at every franchise.

Not to mention that these days most franchise owners are different as companies just sell the franchise name to whoever can afford it so this doesn’t make any sense. But apparently, Karens don’t have any sense and just want to be right every time no matter how stupid they may sound to others. I am just glad that someone else was there to calm, the situation and put the Karen in her place, otherwise, they are used to stomping over people.

We all know what sore this person is talking about but it is better to not say the name in these sore of Reddit posts for fear of legal problems. 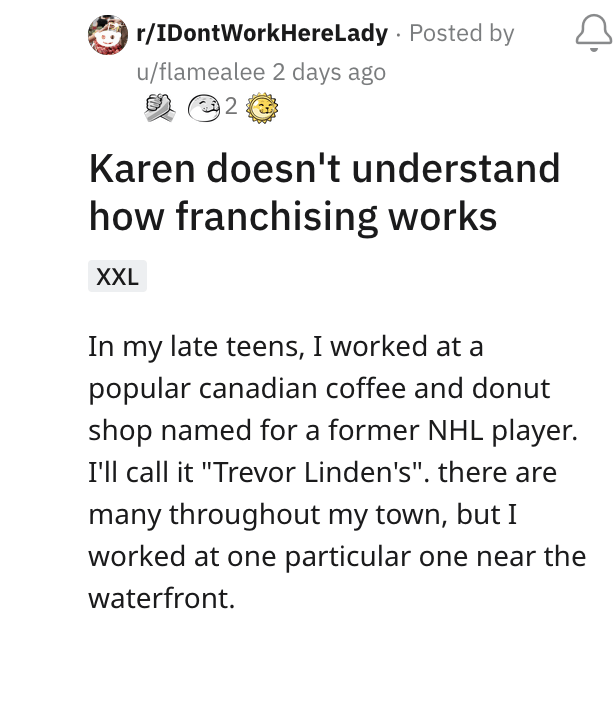 This person was just minding their own business when a wild Karen appeared and made everything worse for everyone.

Now, it seemed to be over when the manager explicitly told her that she does not work here but apparently it was far from over. 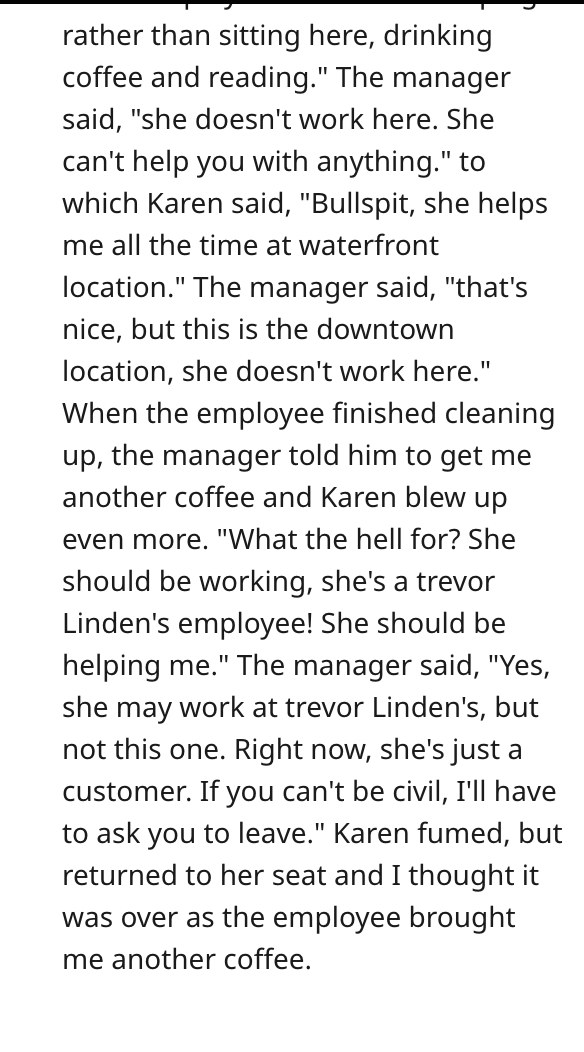 However, she wasn’t really surprised when she saw the Karen at the place she works at just so she could complain about her.

As you can imagine, things didn’t go well for her the manager put her in her place and she got what she deserved. 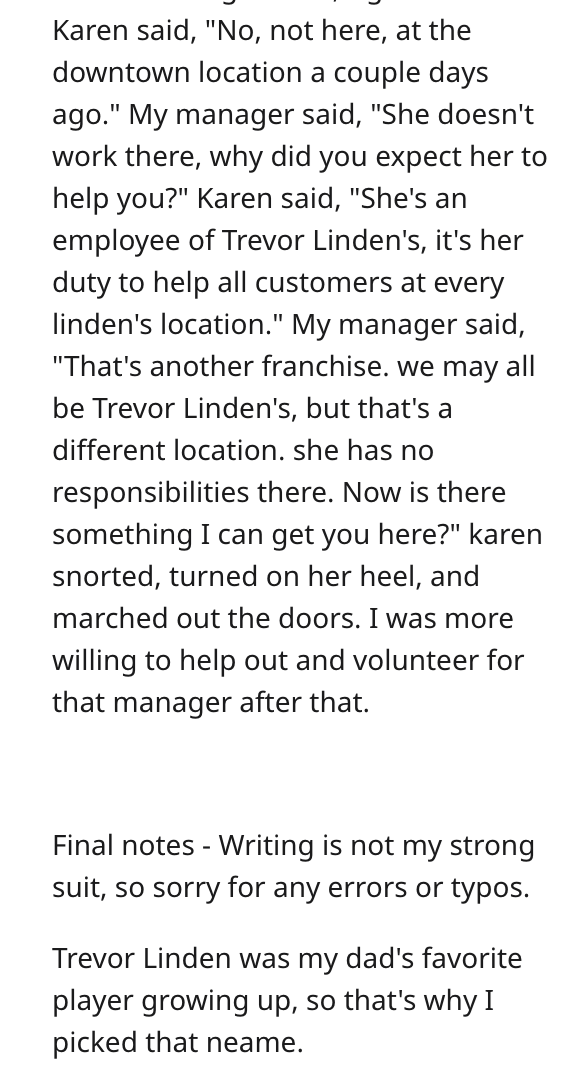 Honestly, even if that person was an employee at that place, do employees not deserve breaks? What if this person was on a break? It seems like Karens think that employees are not humans and that working at a store somehow makes them worse than the rest of humanity. And to just throw her coffee on the table, it really is maddening. I can only wish that the manager would have escalated it further and barred her from the shop.

I would 100% agree with this comment but Karens don’t really think like that or think at all. 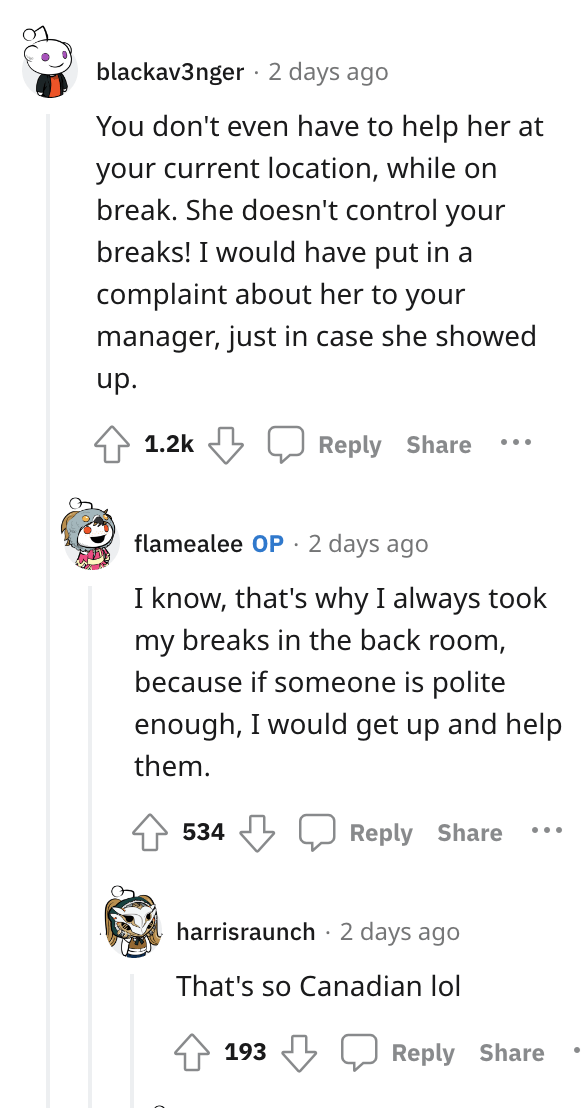 A barista always has to take everyone’s coffee order, it is the oath they swore when they took the job. 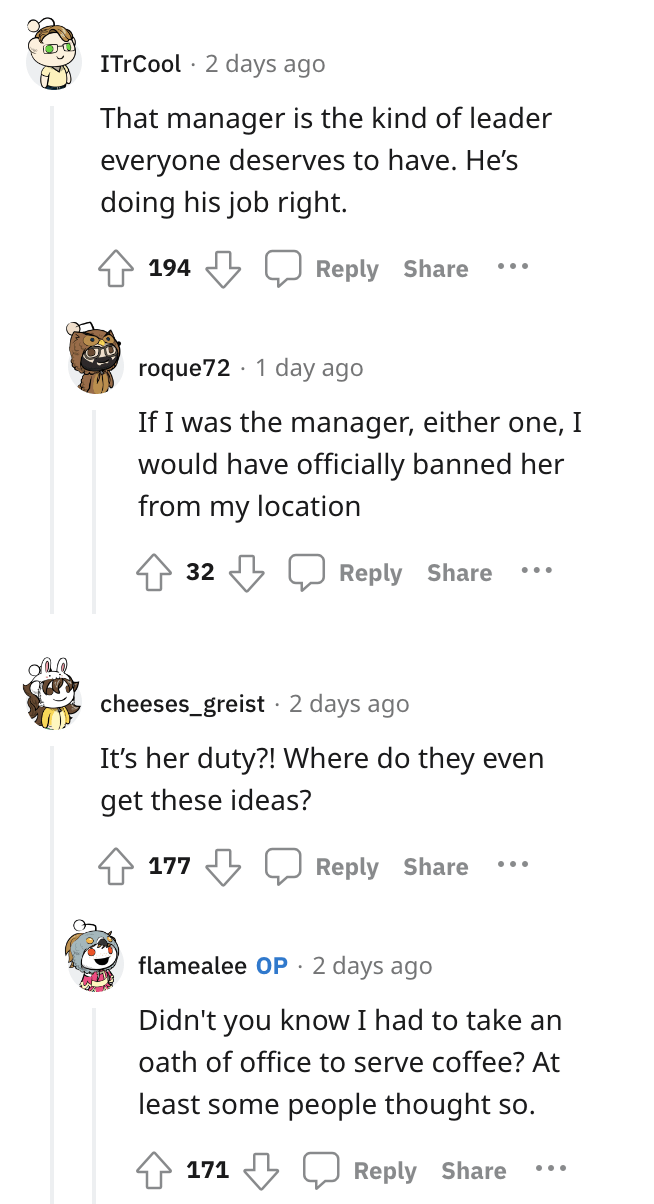 I still cannot believe that these things happen but then again, I have been out in the world.

As it turns out, the stereotype about all Canadians being polite might not apply to every one of them.

I honestly have no idea who these players are but then again I don’t watch a lot of sports.

Throwing the coffee in her face would have been amazing even though it might have gotten her arrested. 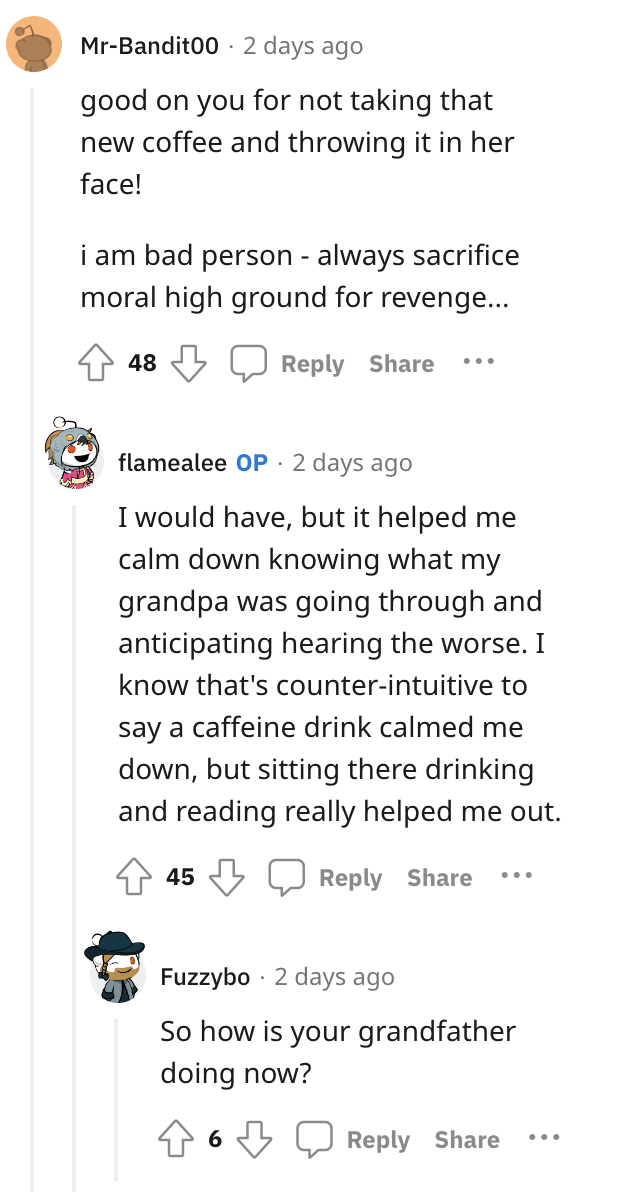 It is always better to be safe than sorry. 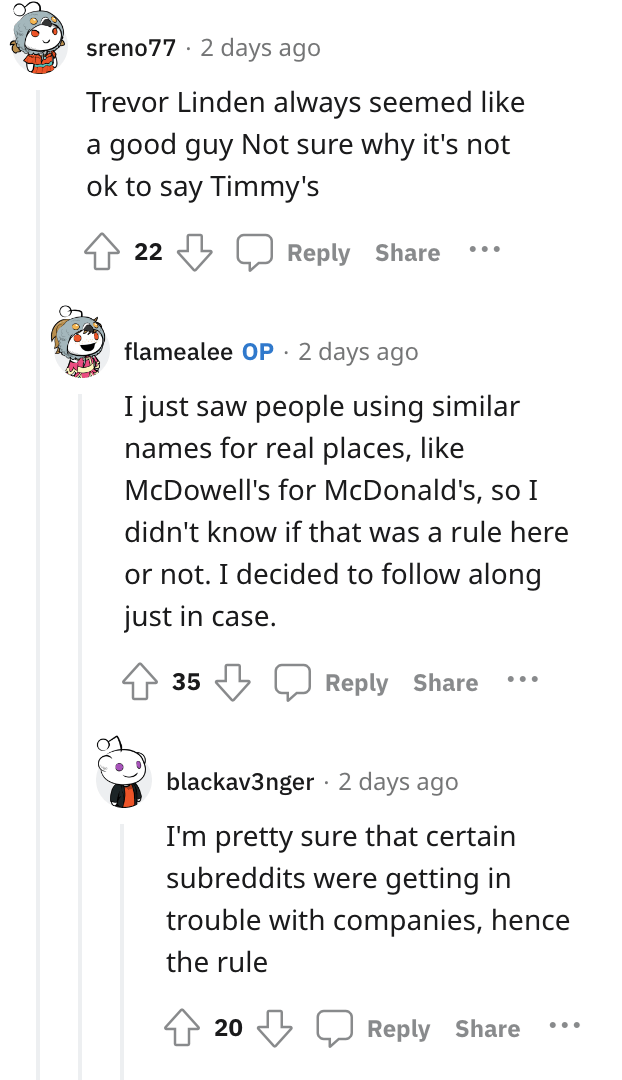 It seems a lot of people in the comments are debating about the player name she chose for the shop. 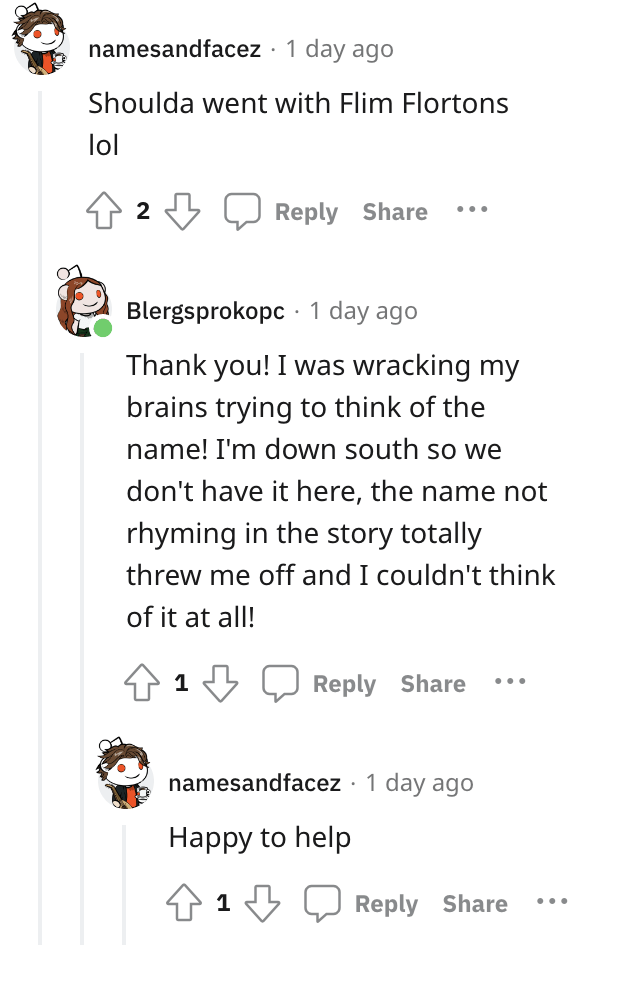 Some humans are rude and others are not, it has nothing to do with nationality.

The manager of the place she works at is great but not the other one. 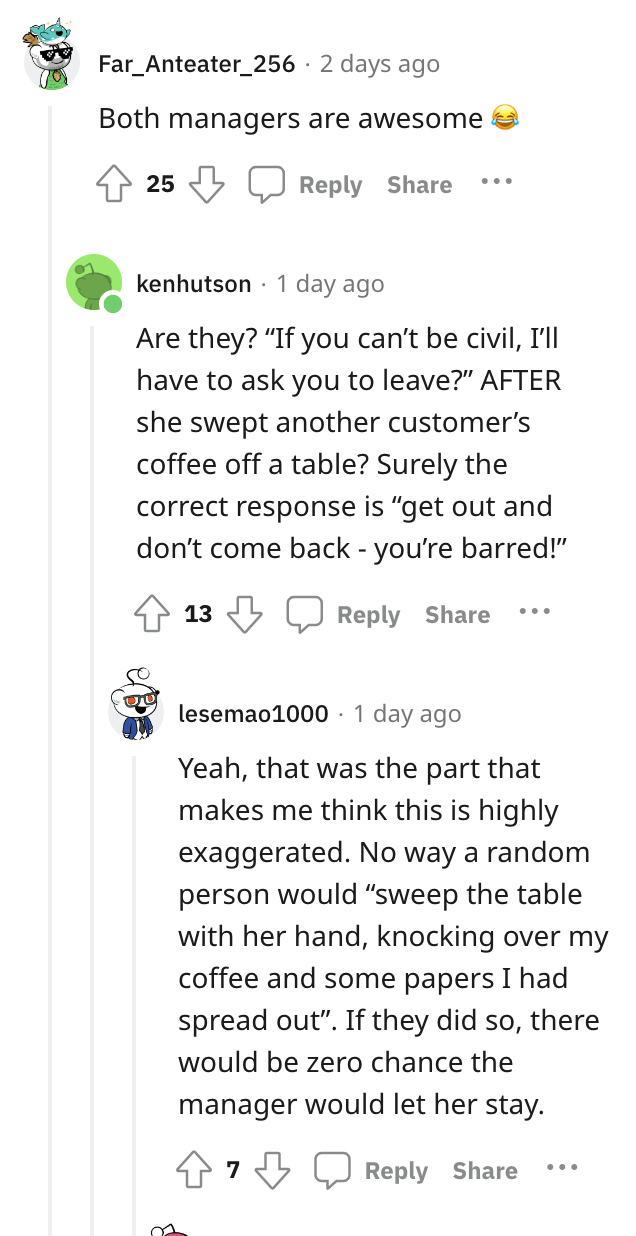 Have you ever been in a similar situation? If so, what did you do? Did you simply ignore the Karen or did you go up against her? Comment down below to let us know. And don’t forget to share this story with your friends so they can share their own experiences in the comments as well.