Working in offices is not compulsory anymore.

We all know that when covid hit, a lot of people had to start working from home. And even though company owners were worried that their employees would get lazy and productivity would go down the drain without the help of micro-managing, that is not what happened. And many bosses learned that there is not much use for middle-managers either. However, that does not mean that everyone agrees with that statement.

I understand that some jobs do require coming to the workplace, especially if you need to interact with the customers yourself or there is an important meeting that day but we have all learned how working from home is generally better. And even though bosses should be happy to not have to pay as many bills for offices, they clearly want everything to go back to the way it was so we can all start working in offices. It is honestly beyond me why so many managers want this but employees are not taking this lying down.

That is the kind of story we have today. This manager tried to threaten this new mother, but the mother was quick to fire back and I am happy that she stood her ground. So scroll below to take a look for yourself.

Things didn’t start out great for this person but they managed to learn everything they needed rather quickly. 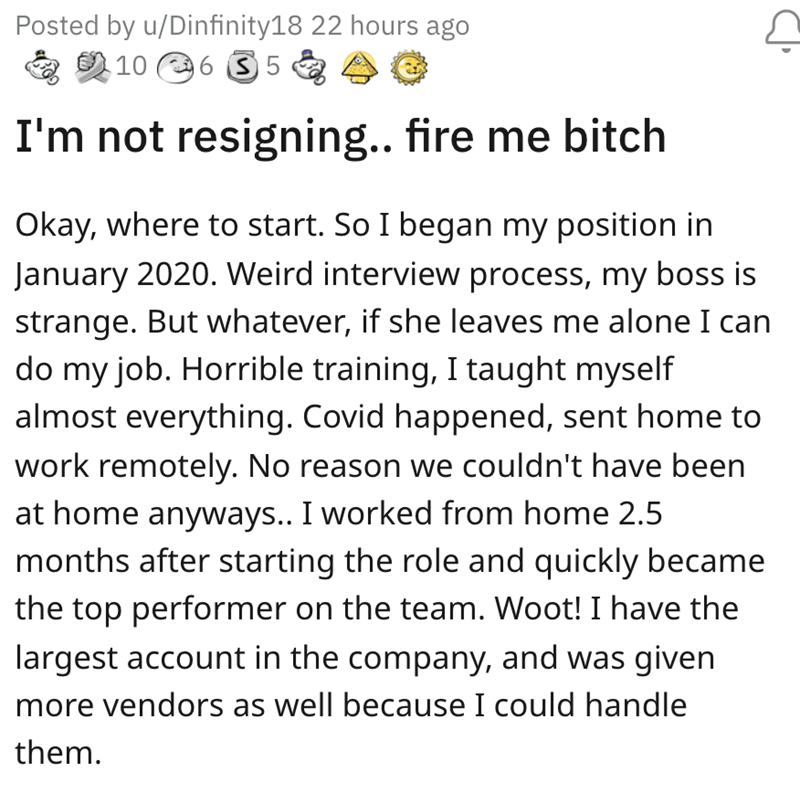 It didn’t take this woman long to become the best employee in the company but they wanted everyone back in the offices soon enough. 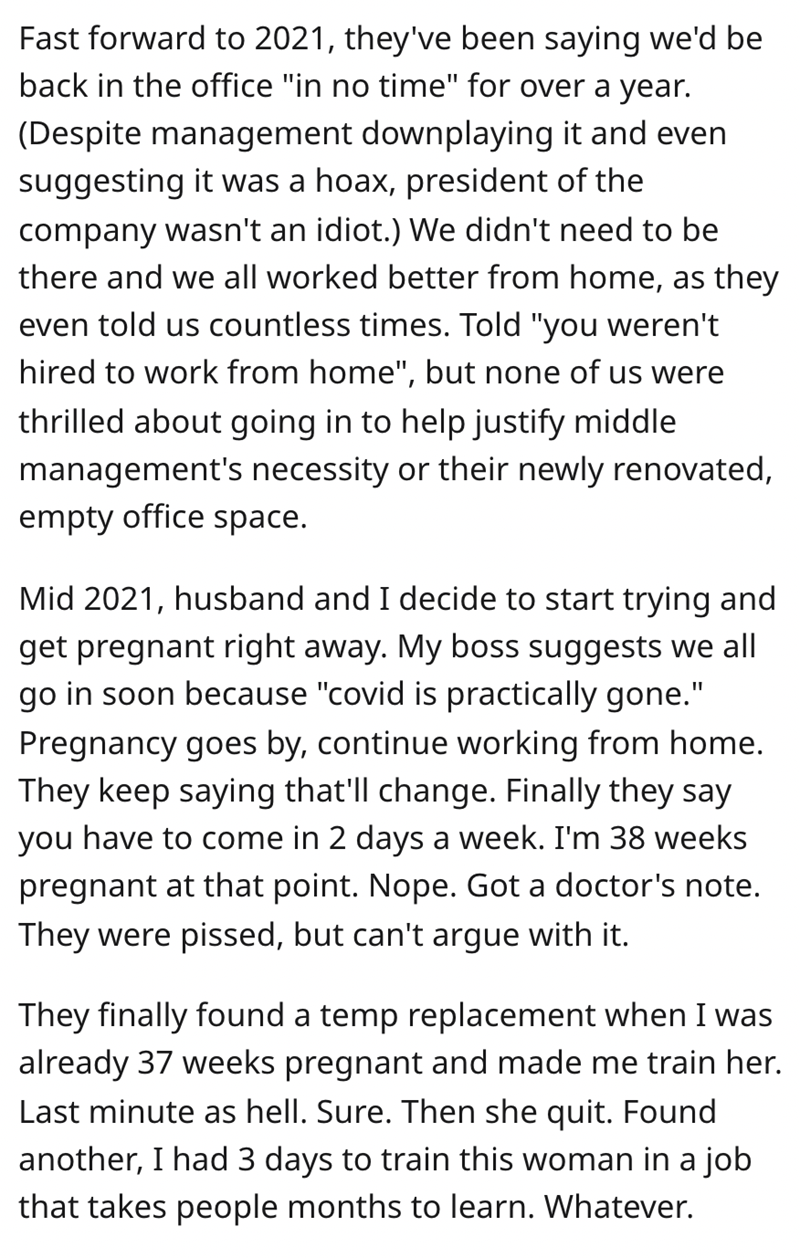 This is when things started to go sour because it is clear that she doesn’t want to go back to the office since she has had a baby and needs a leave. 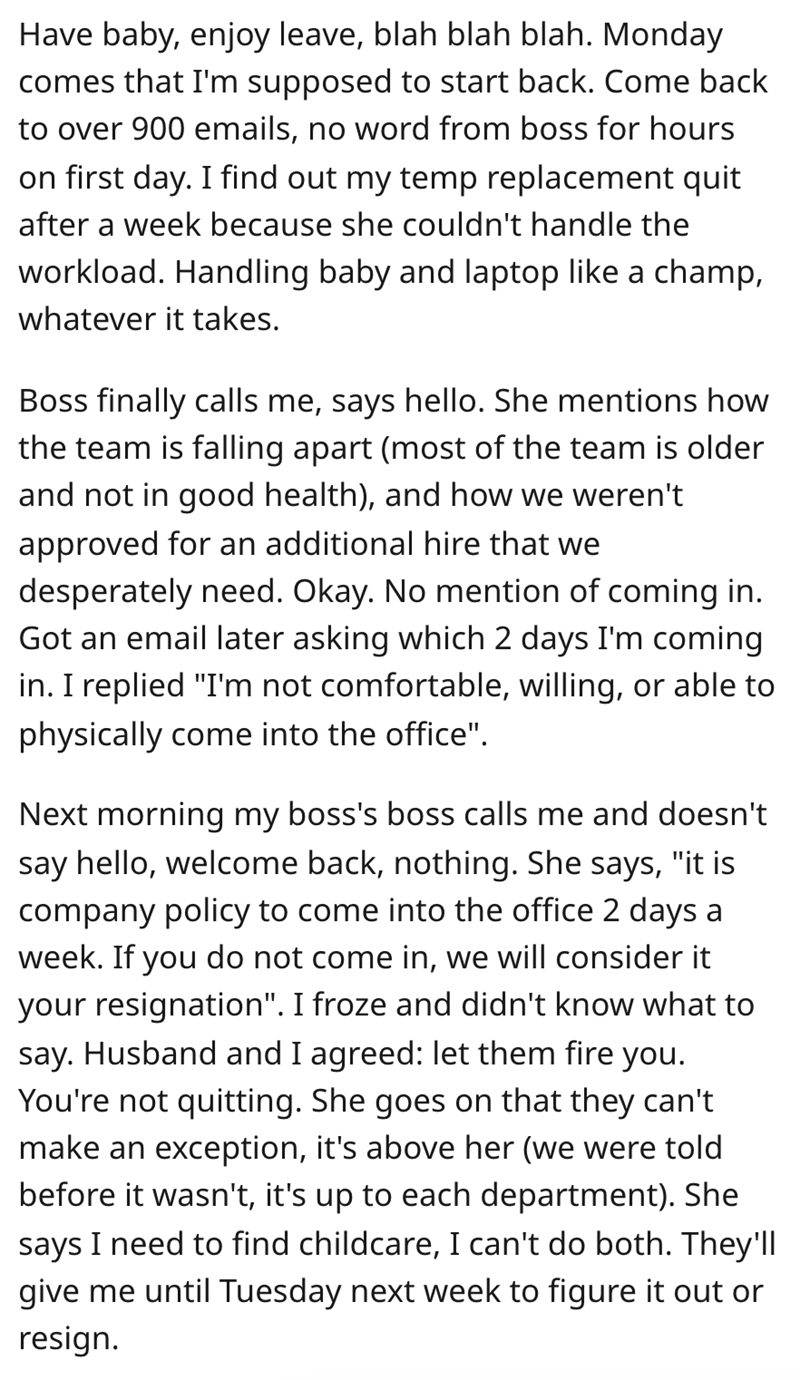 So she basically decides to send an email detailing everything she knows and dares them to fire her which would be a dumb move on their part, especially right now. 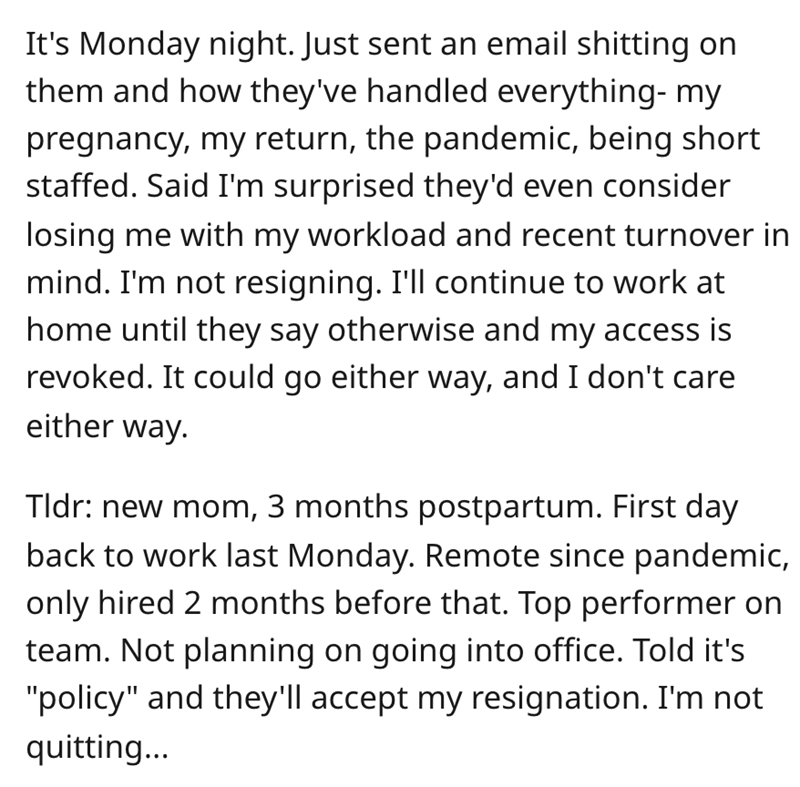 This is not how jobs work. Either you have to fire the person directly or they have to quit. You can’t just assume that someone has quit when they’re basically on a holiday. And it is not like this woman is not doing her job or is in any way slacking. So I cannot understand why they want her back in the office. Is it just so they can mico-manager her and flex their managerial powers? because I can’t think of another reason. I can only hope that the result she gets is the one she actually wants.

People in the comments pointed out how people generally don’t like the feeling of firing someone. 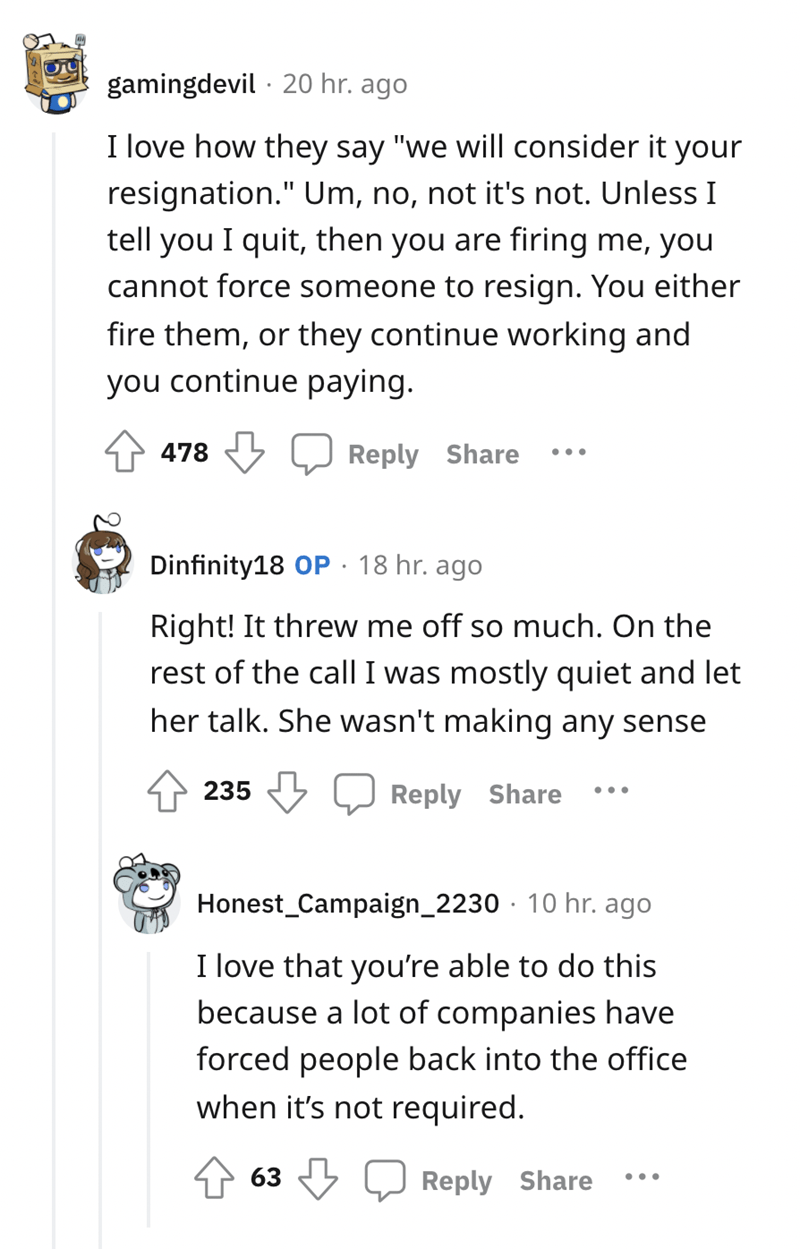 Other commenters applauded her decision for sticking it to the company and standing her ground. 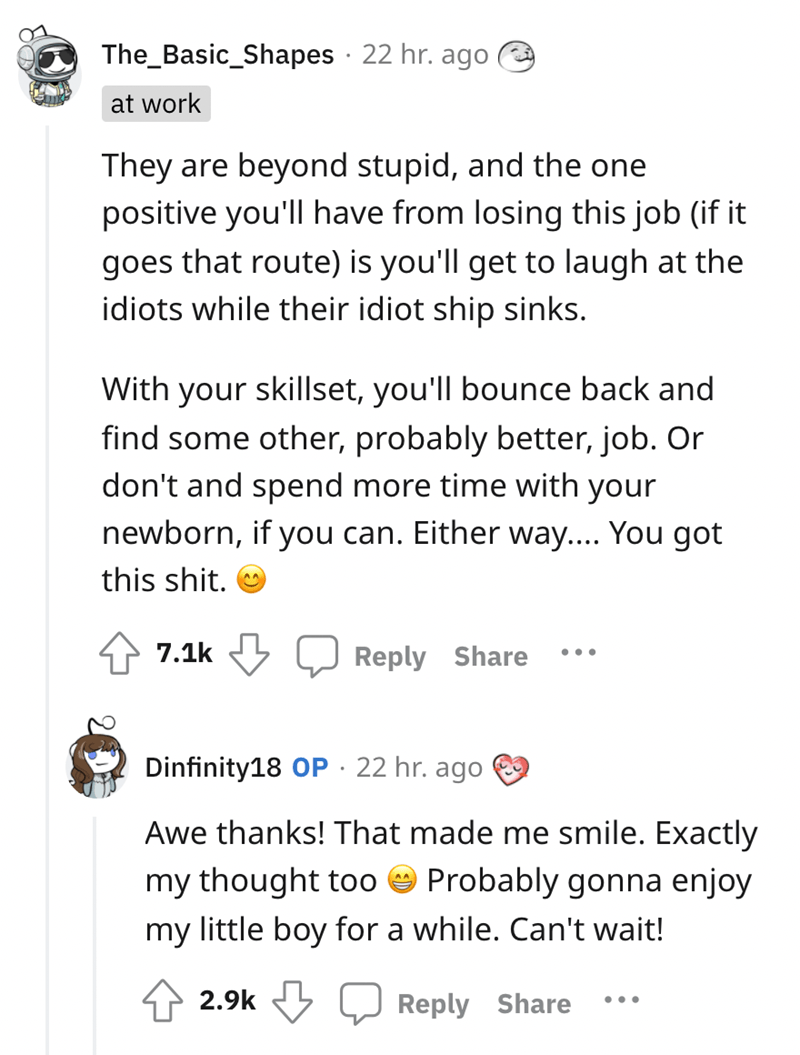 We still do not have an update but I can hope that it goes well for her. 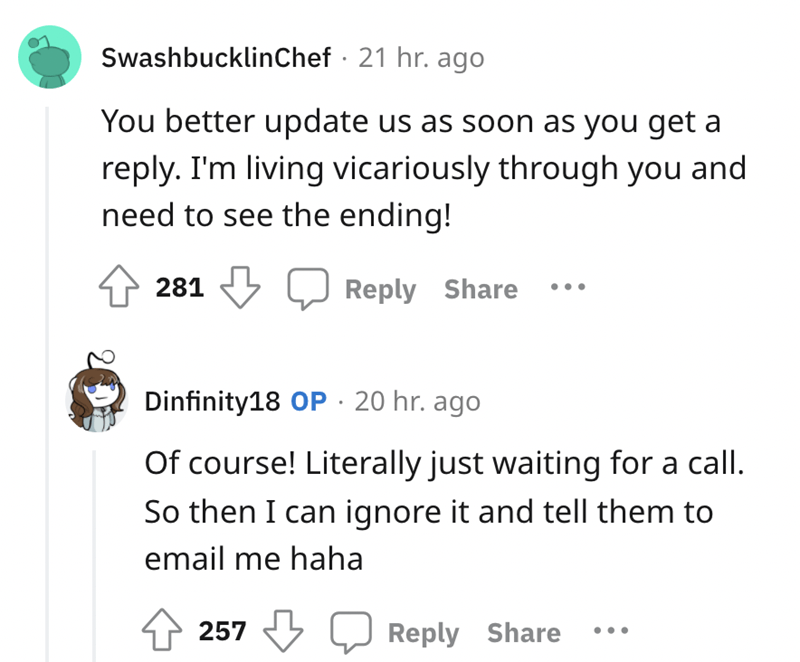 They just have to fire her if they want to stop her from working. It really is as simple as that. 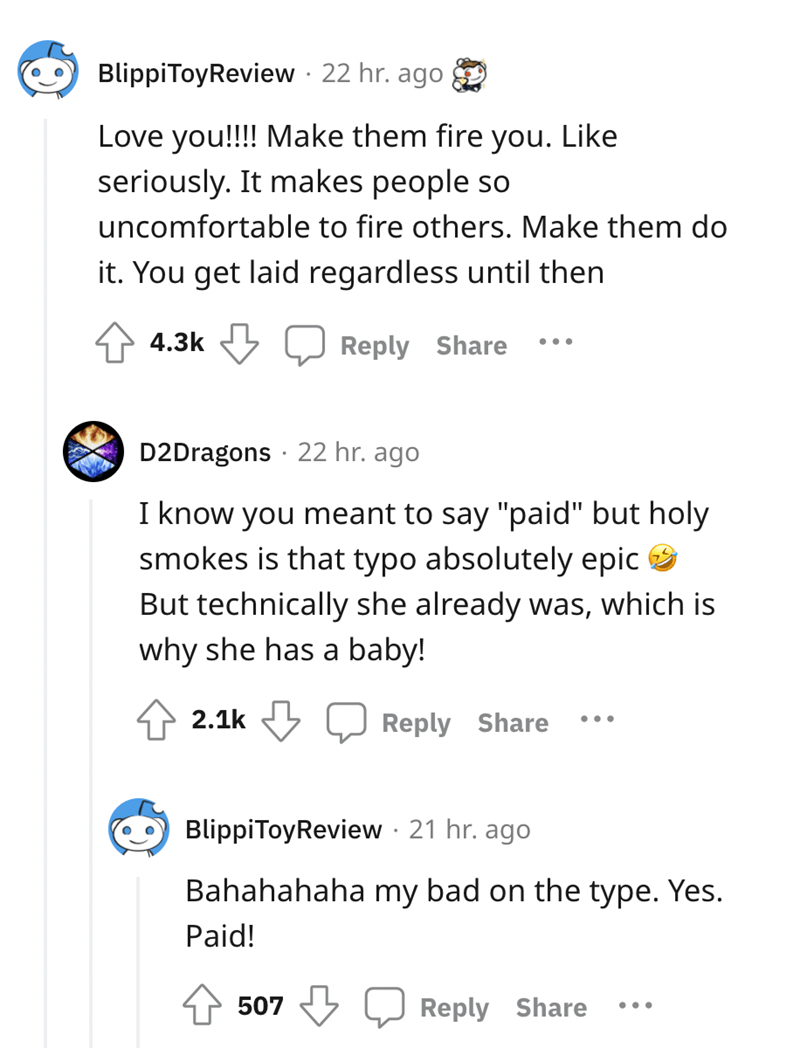 Honestly, I wish I could see their faces as well. It would have been glorious. 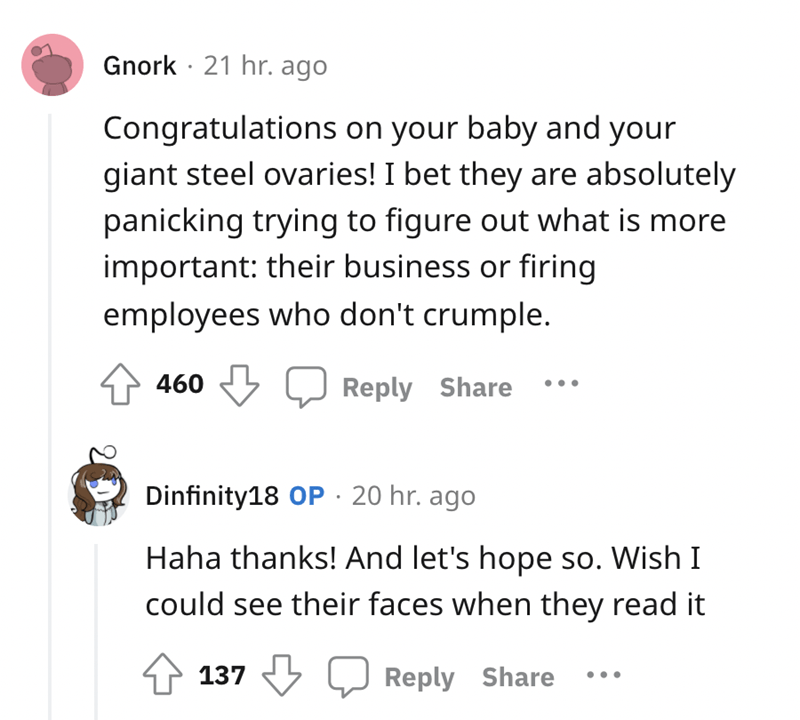 Some managers think that employees don’t know what they are doing even though some of them have worked at the company longer than the manager. 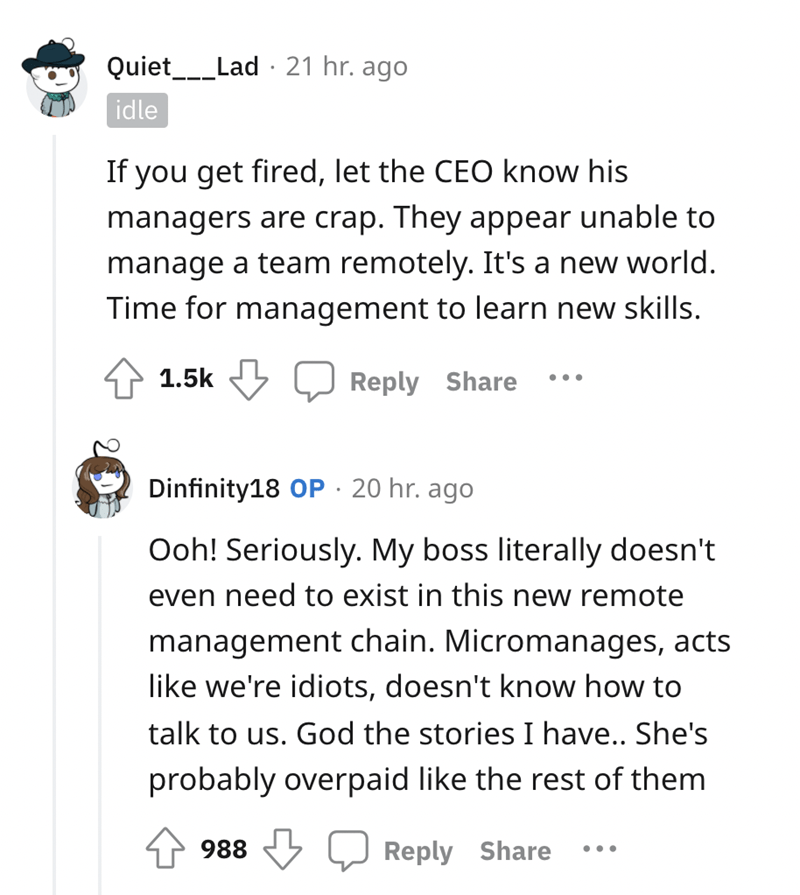 Asking for a raise would have been a great move since she is taking on a lot of responsibilities. 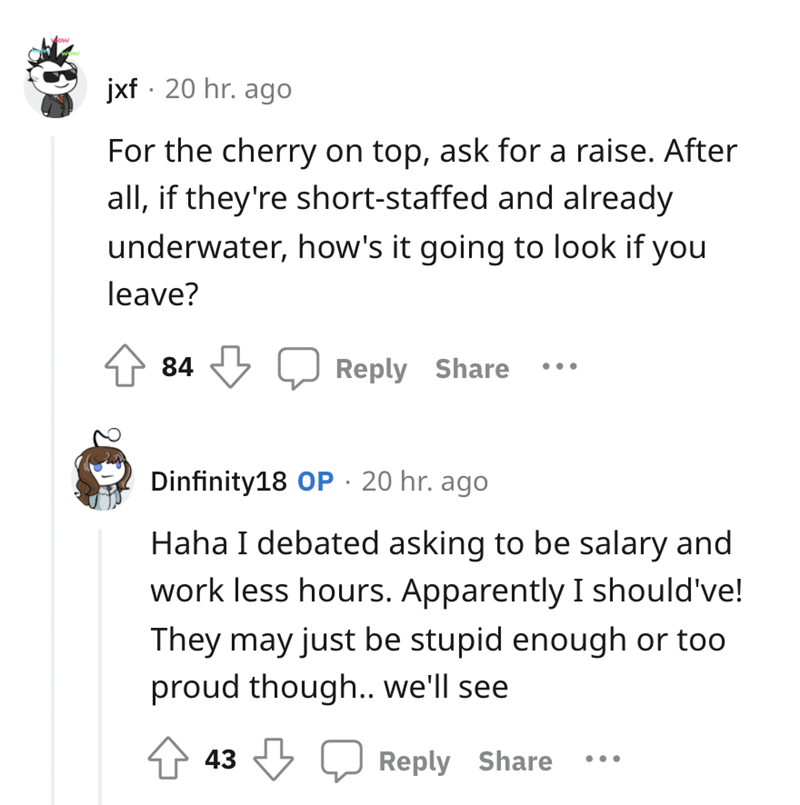 Documenting everything is very important and can save you from liability in the future. 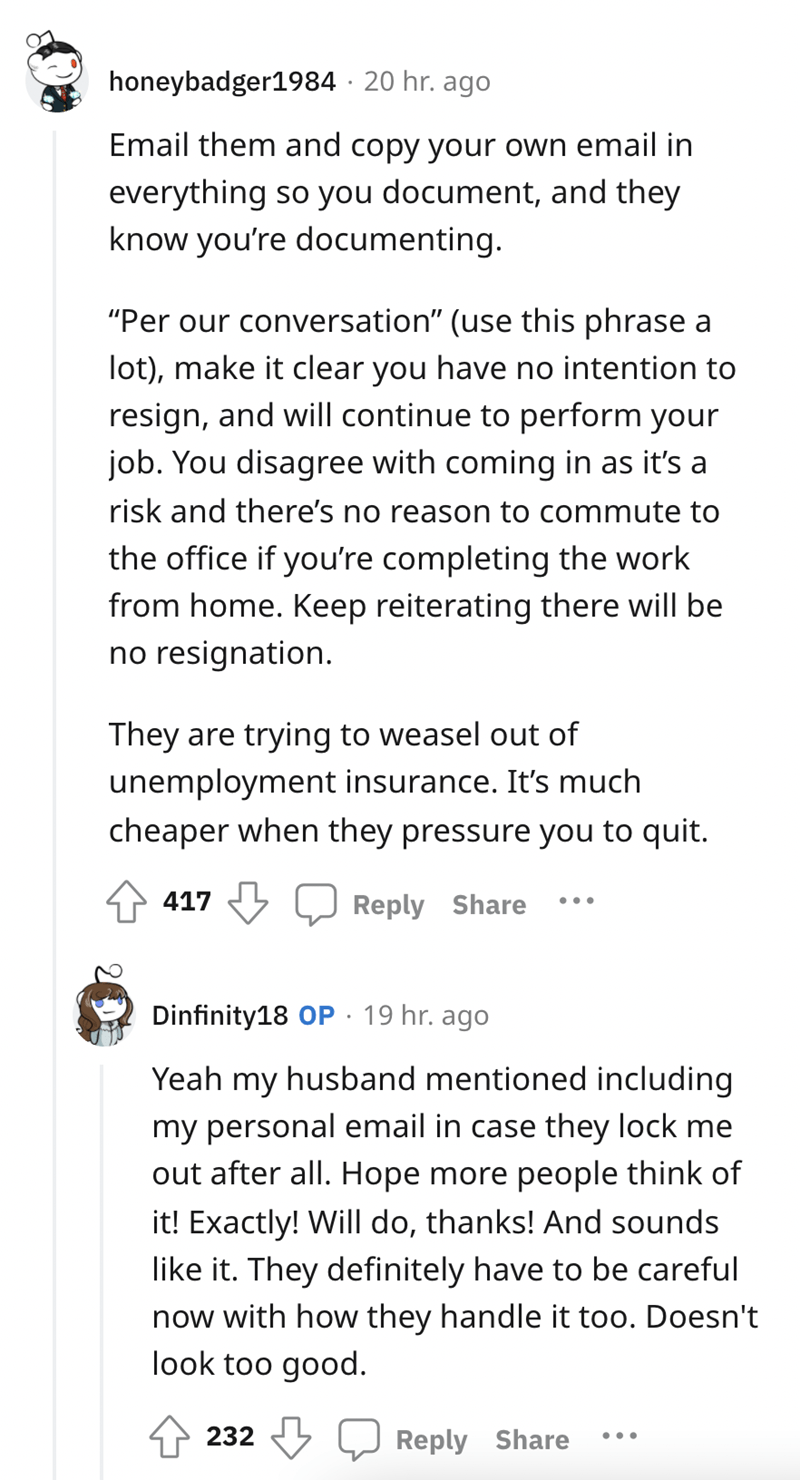 And yet managers still don’t seem to understand this simple thing. 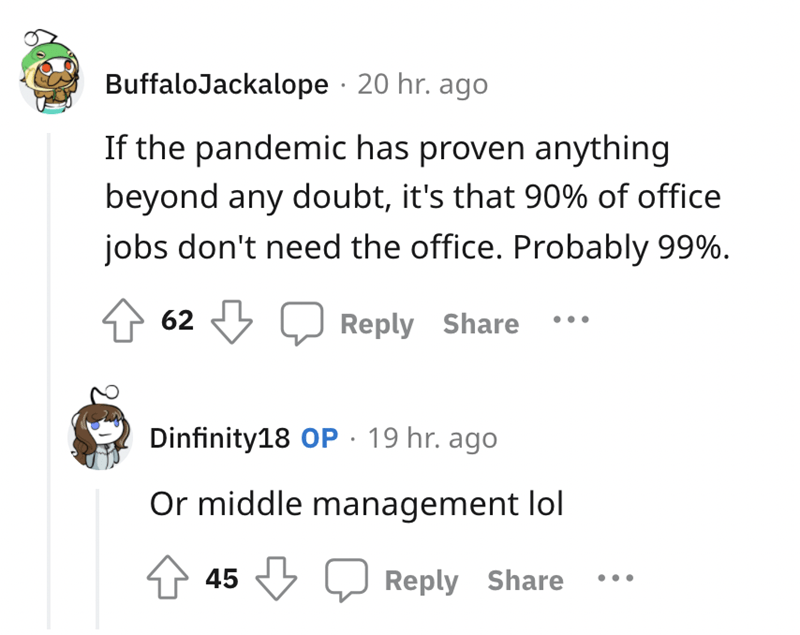 What are your thoughts on this story? have you ever spoken to your manager this way? Or do you hate any kind of confrontation? Let us know your thoughts in the comments below and don’t forget to share this story with your friends so they can join the discussion as well.