It is completely okay to cuddle with your family members.

When the whole world turns against you, your family will have your back. This blood bond can be very strong in most cases. If you have a loyal, loving, and healthy family, consider yourself very lucky. Some people would die to have a family to look after their backs when they are at their lowest. I know I am lucky to have a healthy and affectionate family. Every time I am upset, I go and hug my parents or siblings and everything feels better for a while. It is nice to know that you can lean on someone when you don’t feel okay. However, that is not the case with everyone. Some people have toxic families that have never shown them affection. So it is difficult for these people to grasp the idea of family members being physically affectionate towards each other.

This man on Reddit broke up with his girlfriend and kicked her out after she made nasty comments about his bond with his brother. She called them “disgusting” for cuddling. The man asked if he was wrong for doing so. Scroll down below to read the details of the story:

The man and his brother had recently lost their parents. His brother moved in with him because he had no other legal guardian left. The man’s girlfriend of two years would also visit him often and stay over, but she hadn’t moved in yet. 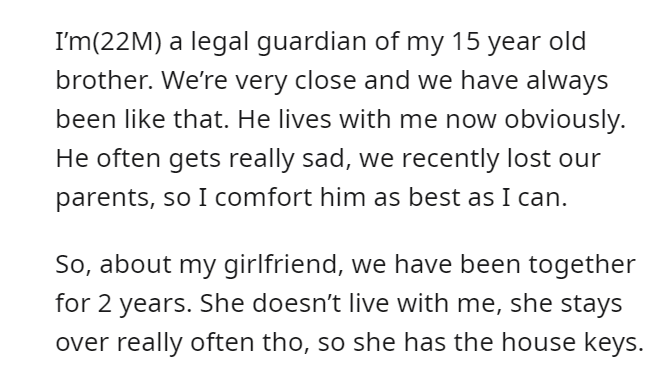 One day, she came over while the brothers were asleep and cuddled up on the couch. She created a scene and said the brothers’ relationship was weird and disgusting. This made the man’s brother cry. 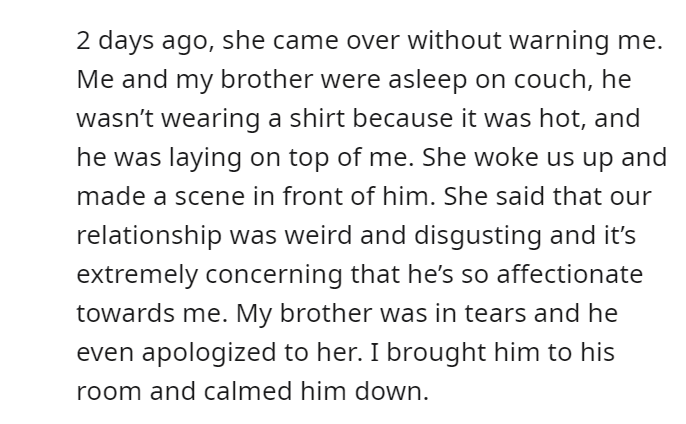 The girlfriend refused to accept her mistake and the man kicked her out of his house. He later broke up with her because she kept saying she did the right thing. 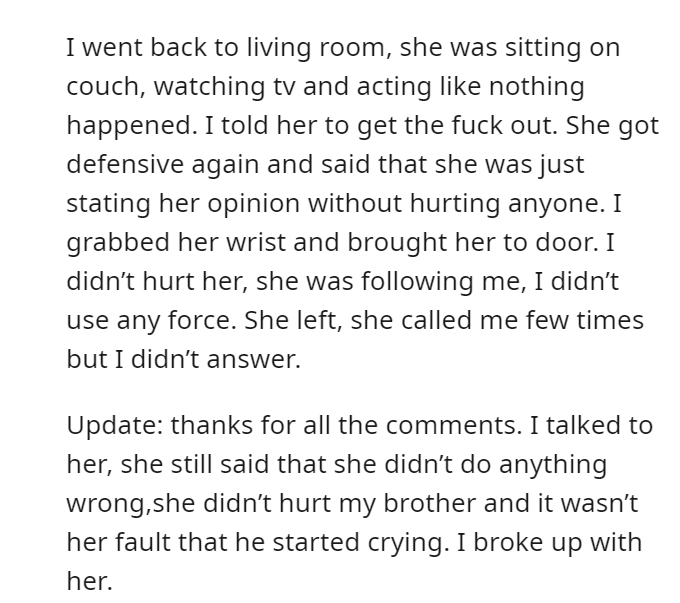 He gave a little more information about how they were sleeping.

This is just sad. If this was a story about two sisters sleeping together on the couch, there would have been no drama. I guess it is just because they were guys, they aren’t supposed to show affection towards one another. The girlfriend was toxic and the man did the right thing by kicking her out to defend himself and his brother. I don’t blame him at all. 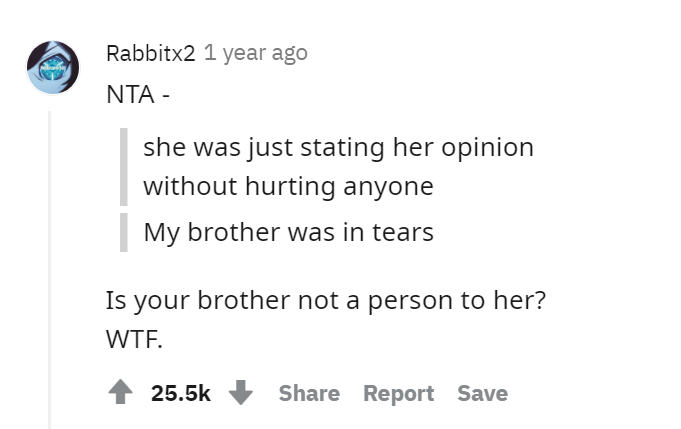 She does not get to decide whether or not she hurt someone. 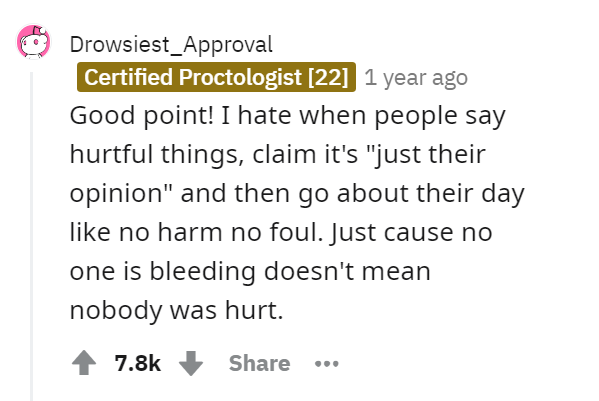 It is so wrong of her to sexualize his relationship with his brother.

He did the right thing by breaking up with her. She deserved it. 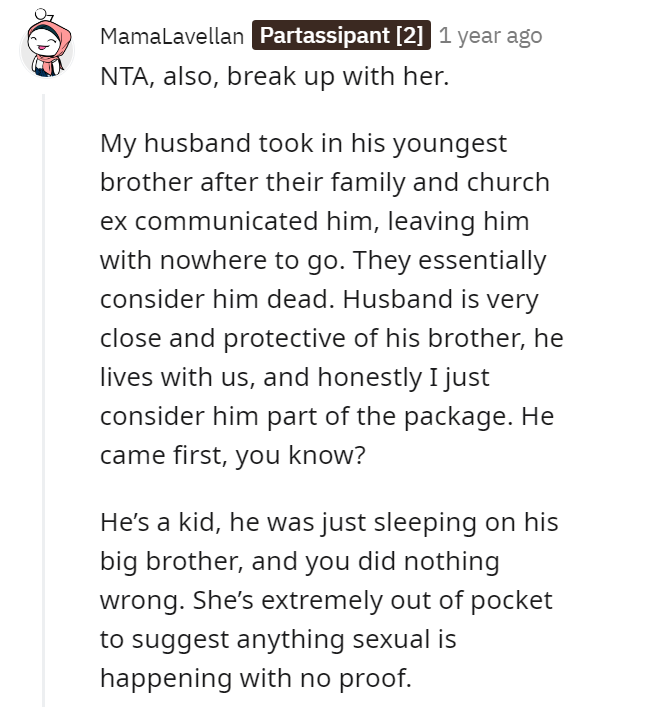 Right in the trash.

People shared their own stories in the comments. 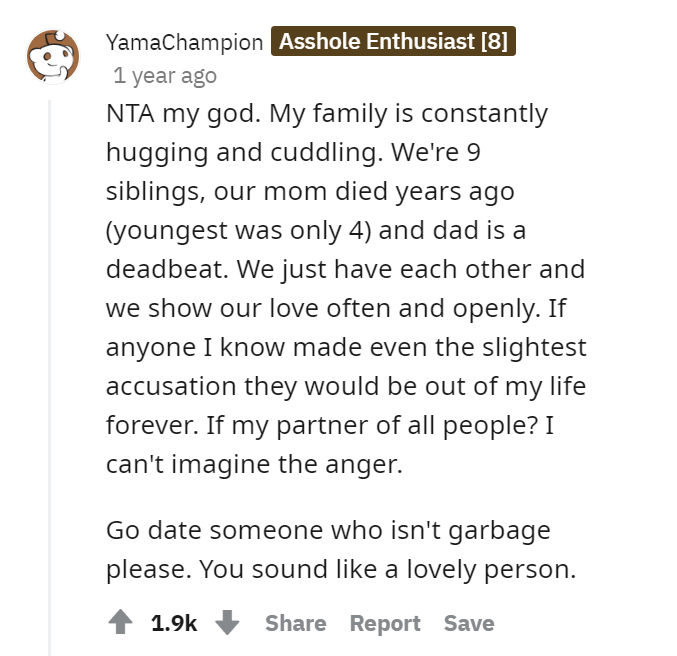 One person said it could be a little odd for them to cuddle but still didn’t blame the man. 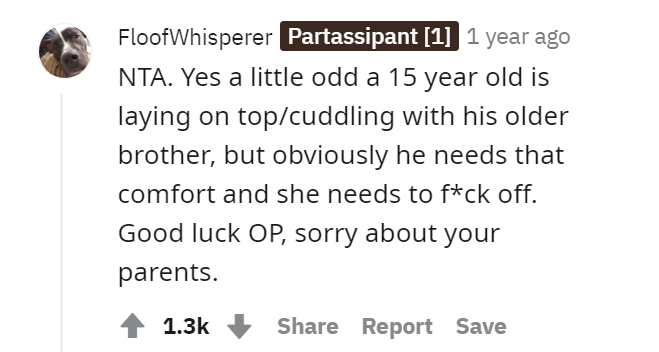 However, someone responded to them by saying it is just gender bias. If it were sisters, nobody would feel it is odd. 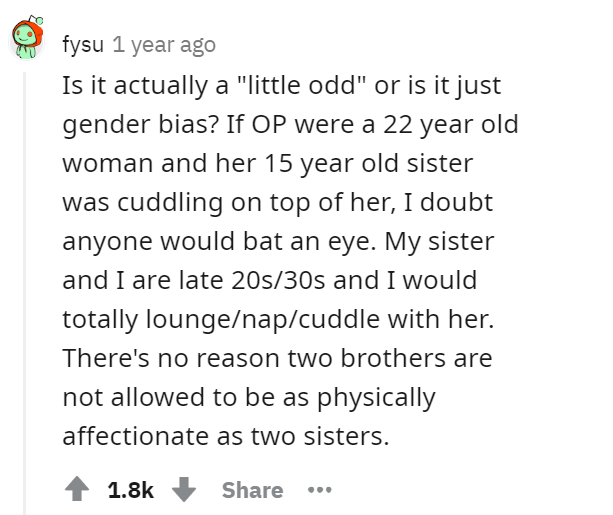 What is your opinion on this? Did the man do the right thing? Share your thoughts with us in the comments below.