No matter how many times they get burned by their employees, it seems they are oblivious to the problems of their workers. I am sure everyone has at least one story of a horrible boss. Which I don’t really understand. After all, what is the reason that once they have their own company and can hire employees, they suddenly turn into complete a**holes.

Maybe they become enamored with the power their position provides or perhaps they were always awful people and can now show it. Whatever the reason, everyone gets their comeuppance no matter how untouchable they think they are. Reading all of these revenge stories makes me wish I had done something when my previous boss tried to humiliate me.

Oh well, there is always next time and these ideas will certainly help.

I think everyone has at least one story they can share on this subreddit.

You would think that a socially awkward person wouldn’t turn into a tyrant. 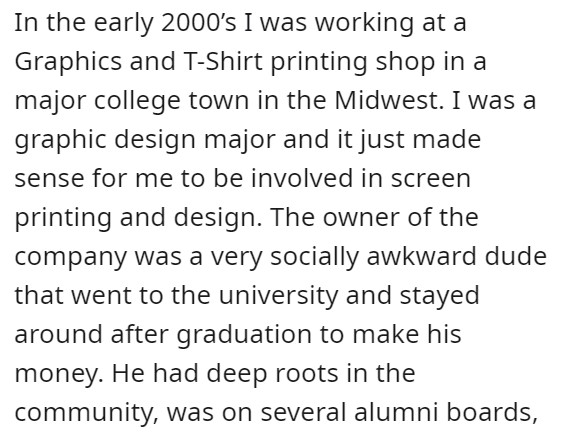 But that is where you’d be wrong. 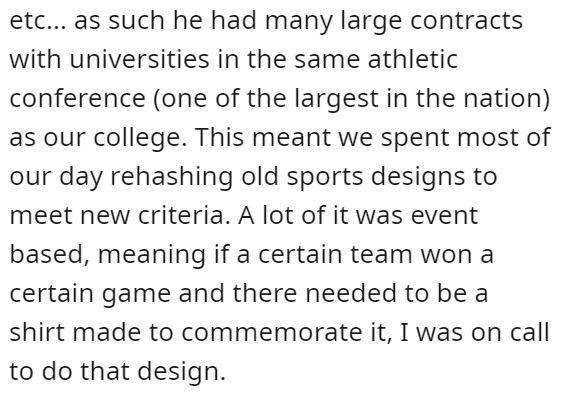 At first, the job was going well and Ron didn’t bother them too much. 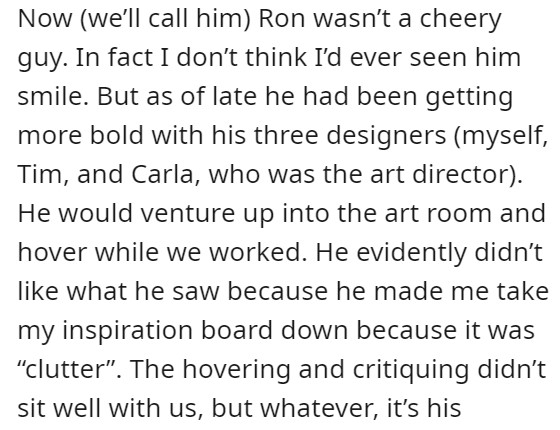 But he changed soon after he hired his own father. 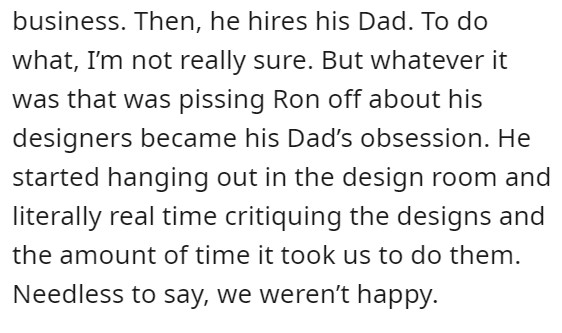 I am going to take a huge leap of guesswork and assume that Awkward Ron managed to get some level of autonomy at school and was able to set up and keep his company healthy with the help of his uni contacts and decent employees until his probably toxic dad got his hooks back into him and started undermining everything Awk Ron did.

It probably started with the dad criticizing everything from afar and then eventually pushing Ron to hire him, which just obviously made everything go further to shit. This is why, when you have family that is horrible you stay as far away from them as possible, no matter how many people wail about “but faaamillly!!!”

Obviously I am doing some major reading between the lines here and I could be completely off base.

It does not negate the fact that Awk Ron was being a shortsighted asshat and completely deserved to be blindsided. So I hope you and Tim enjoyed many guilt-free beverages (and a cab home) –x12BoxofPeace

Adding your parents in your business can be a recipe for disaster. 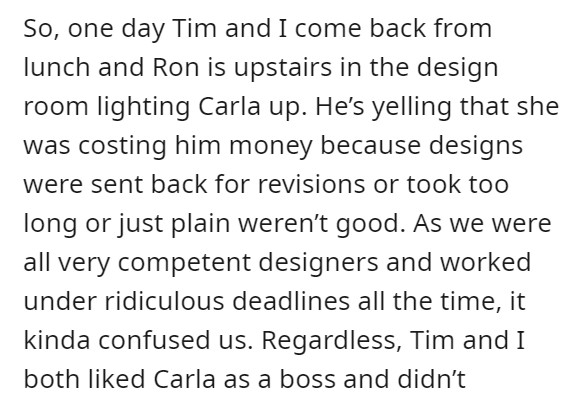 Good for her indeed! She deserved respect. 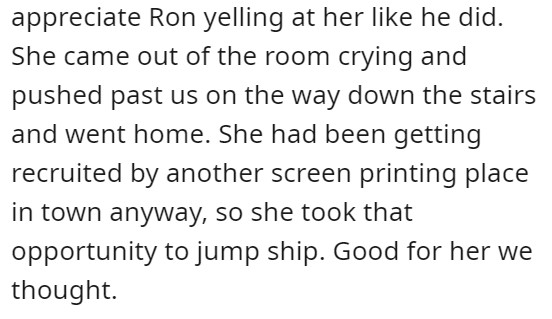 Not only were two people working the same as three people but they were also insulted every minute. 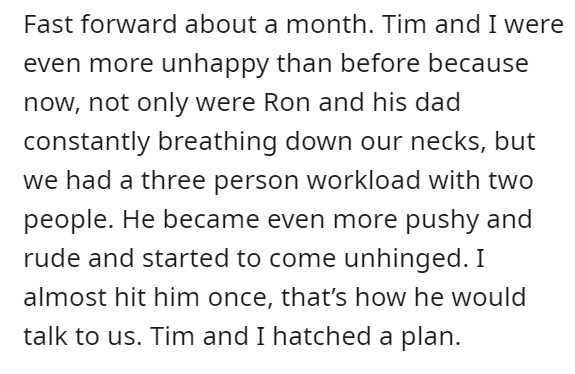 They knew they had to do something and a great opportunity was underway. 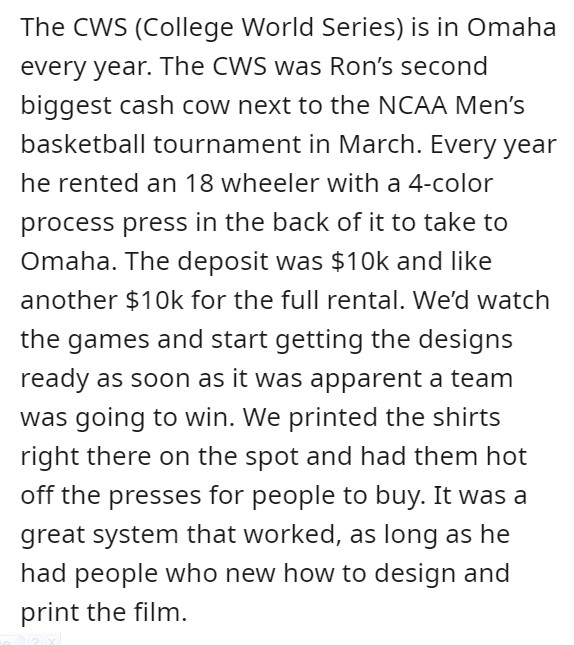 And these two certainly made perfect use of that opportunity sticking it to Ron. 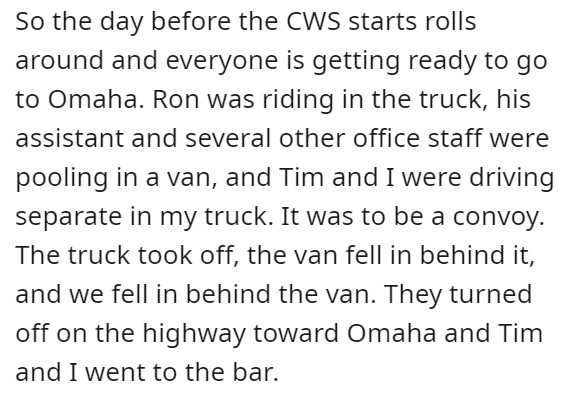 I hope he let his father go. 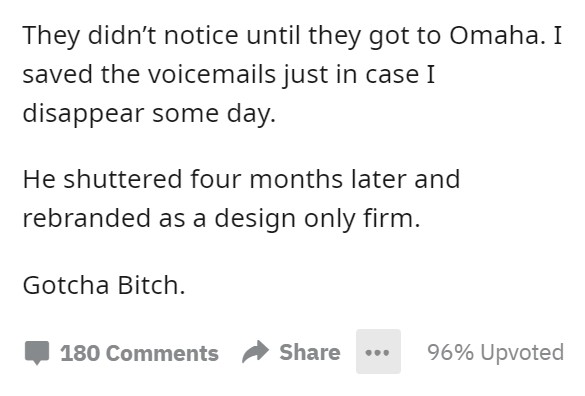 He tried suing all of them but that didn’t go his way either.

He used general threats and a lot of cursing. You don’t know who you messed with. You’ll never work in this town again. Movie stuff e.t.c.

The legal threats came later but one of my parents is in the legal field and I was never worried. Nothing materialized. He tried to take action against the firm that hired Carla away from him because eventually Tim and I went to work there as well. He thought it was some kinda conspiracy by our new boss but he could never prove that. –SadConfiguration

He must have had a lot to think about on the way back I presume. 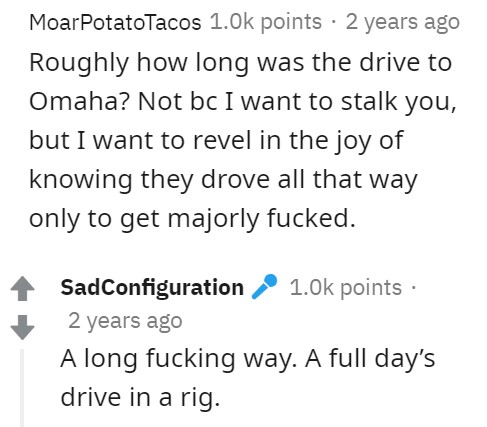 What do you think about this revenge story? Do you think Ron got what he deserved or was it his Father the one who deserved all of this? Comment down below and let us know.