There are some things you just don’t do at an interview.

Like showing up naked or calling your administrator hot. These may sound like weird out-of-nowhere things but apparently the following applicants didn’t think so. Because they did just that and more. I assume if you are out on an interview, you want the job. So I have no idea what was going through these people’s minds as they partook in these weird behaviors.

Acting strangely because you are nervous is one thing. But remaining naked on an interview and acting like everything is fine is a completely different story. All of these stories were shared because one Reddit user had the brilliant idea to ask the world about the weirdest interviews they’ve witnessed in their life.

And Reddit was quick to answer. Let’s just say you are in for a ride. So scroll on below and take a look.

I can understand thinking it would be a voice call.

However, most people would then go put on clothes or reschedule.

Sometimes you just need a limousine for a mere interview.

Maybe she was having a very bad day and needed a hug. 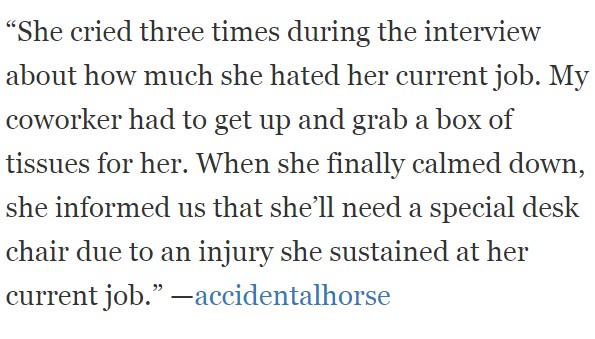 At least they were vegetarian.

Me: I see you managed a vegetarian restaurant.

M: It says here you managed a vegetarian restaurant.

I: Oh, I guess I did write that. Not really though. My girlfriend had an art exhibition, and I organized the sandwiches for the opening. They were vegetarian.

This was a candidate that was otherwise pretty impressive seeming, and had been among the favorites for a quite sought after position, the interview had even gone quite well up until this point. Met him later at a party, he had no memory of me. –squirrel_exceptions

That does not sound like a threat at all. Not at all. 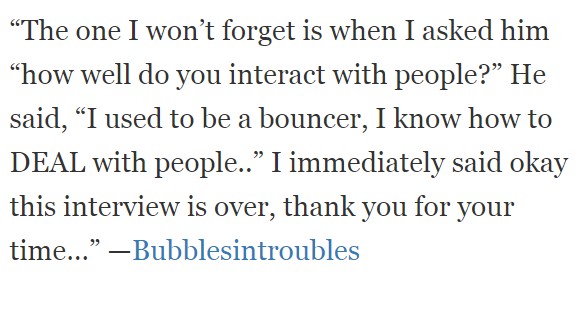 There is being ‘not knowing when to shut up’ and then there is this. 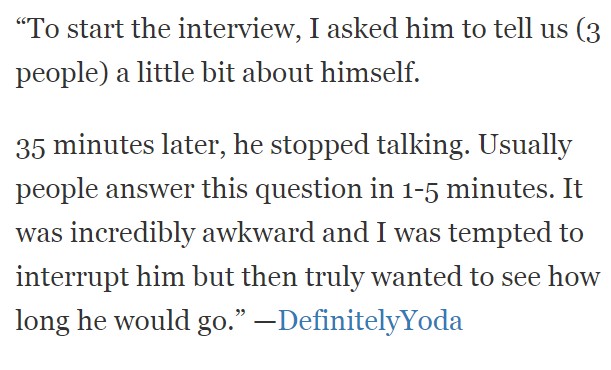 She should have not mentioned that little tidbit.

I hope you didn’t serve that part of the food.

This kid, probably 18-20, started picking his nose, like nuckle deep and digging for gold in the middle of his food service job interview.

Wrapped that up real quick and didn’t hire him.

I am pretty sure they were stoned out of their mind.

I just have one question. Why?

They were probably not serious about the job.

What is the strangest thing you have done in an interview? Let us know in the comments below.