It is impossible to not fall in love with dogs.

When we were kids, it was impossible to persuade our parents into getting a puppy (or any other pet) but especially a dog. Every child has a phase where they want to own a pet, they might cry and beg but never d they ever get the permission of having one. Let me tell you something, I have been through the same and this is truly cruelty. Although mothers are easy to get a yes from, they are easy to convince with some melodrama but it is always difficult to get approval from our fathers and eventually our mothers gang up with our fathers as well and suddenly their yes turn to no. Which is totally unfair. The lucky kids were those whose fathers were also into having dogs as pets and loved dogs as much as their children if not more, they actually had dogs before they were even born so they never had to experience the heartbreaking situation like most of the kids. In that case, I would get very much jealous of the kids who would show off their pets at school or in parks.

Mostly, fathers come up with hundreds of reasons to not get a pet and keep making up excuses, pointing out all the negativities of having dogs as pets. Clever are the ones who never asked for permission and adopted dogs going against all the odds. Trust me, this way suddenly all the fathers and husbands forget how bad it would be to have a dog as a pet. We have gathered a bunch of images from the internet of the husbands and fathers denying the requests of their beloveds for having a dog as a pet but ended up falling in love with them when they spent some quality time with them. Keep on scrolling down…

1. From “the dogs are not coming up on the bed” to “we need to get a king-size bed so they can sleep next to us.” 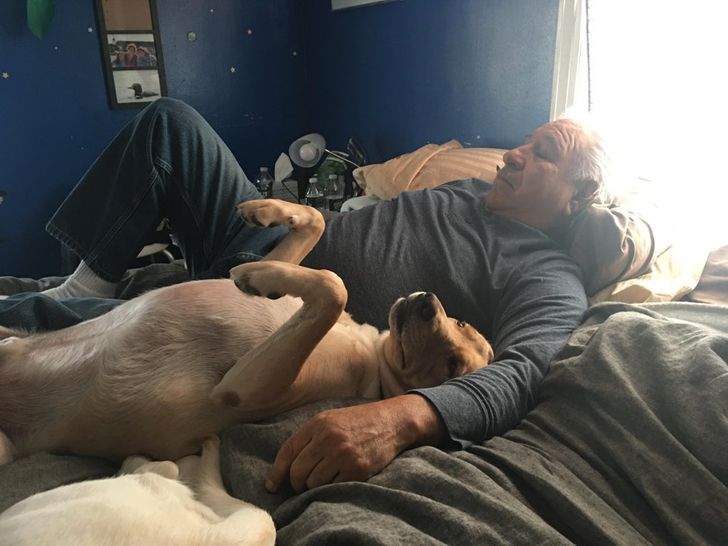 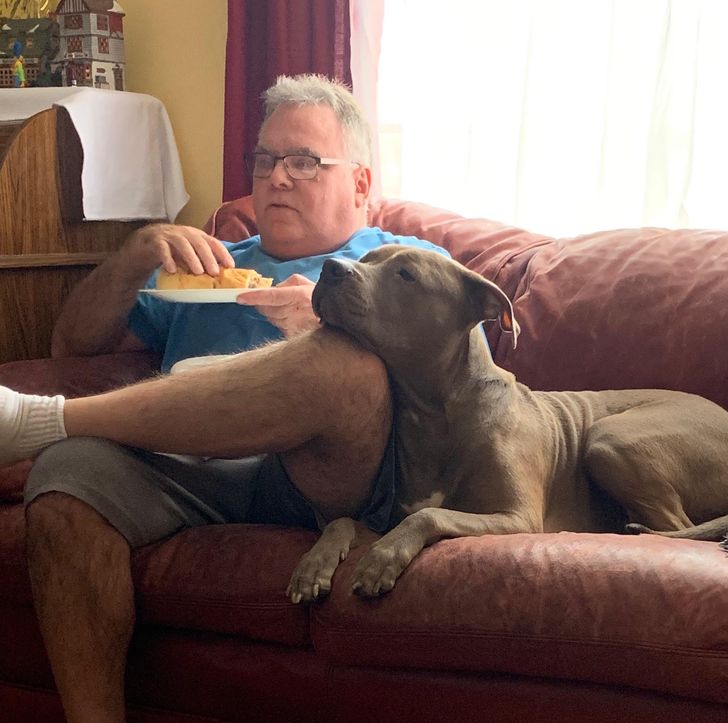 3. “A few weeks ago she wasn’t allowed on the couch. Now she’s allowed ’but only so she can keep my lap warm.” 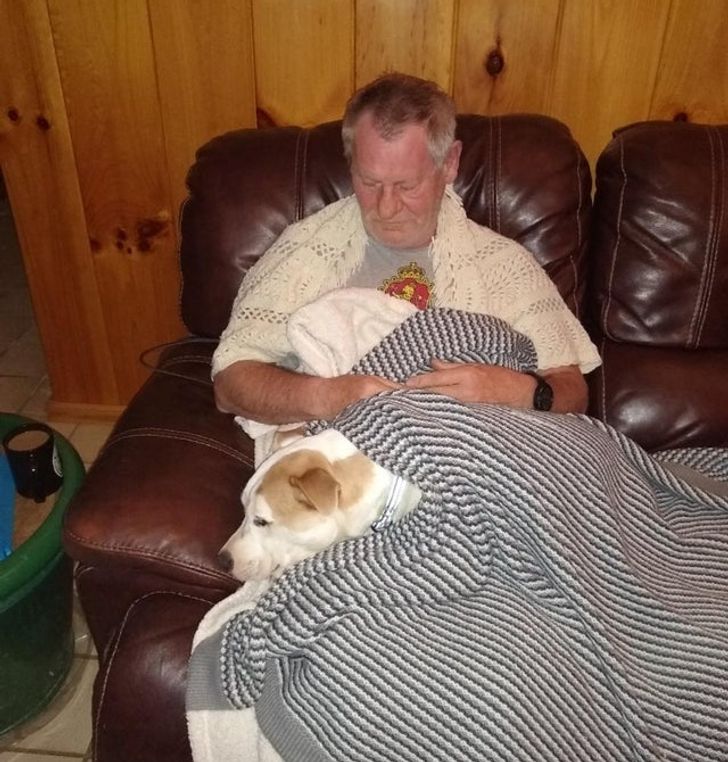 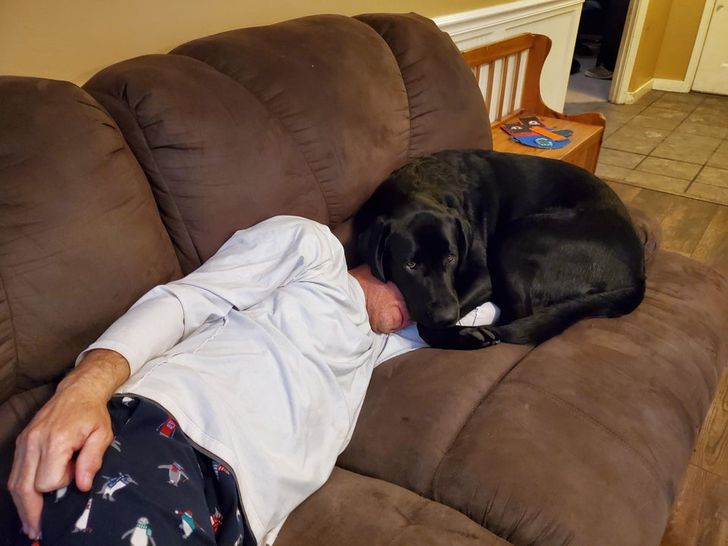 5. “My boyfriend with the puppy I spent almost a year trying to convince him to get — now I think she loves him more than me!” 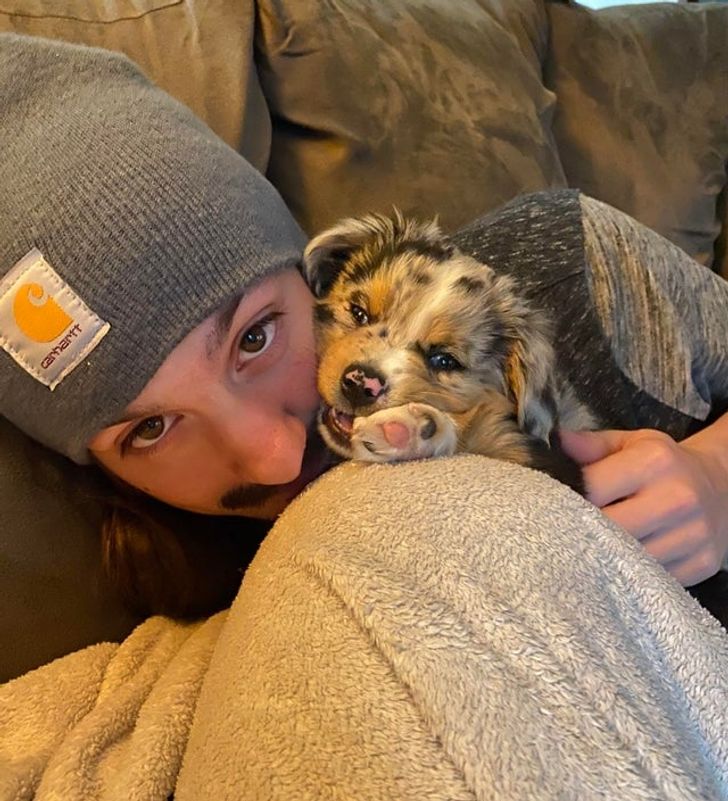 6. “He never wanted a dog. 4 days after they met, she helped him to recover from a stroke.” 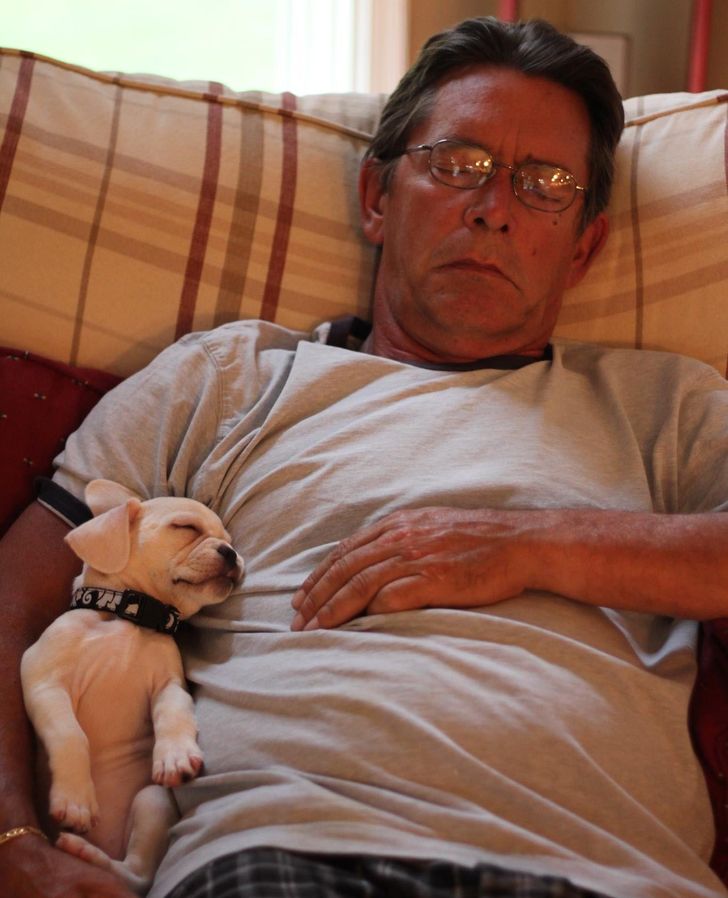 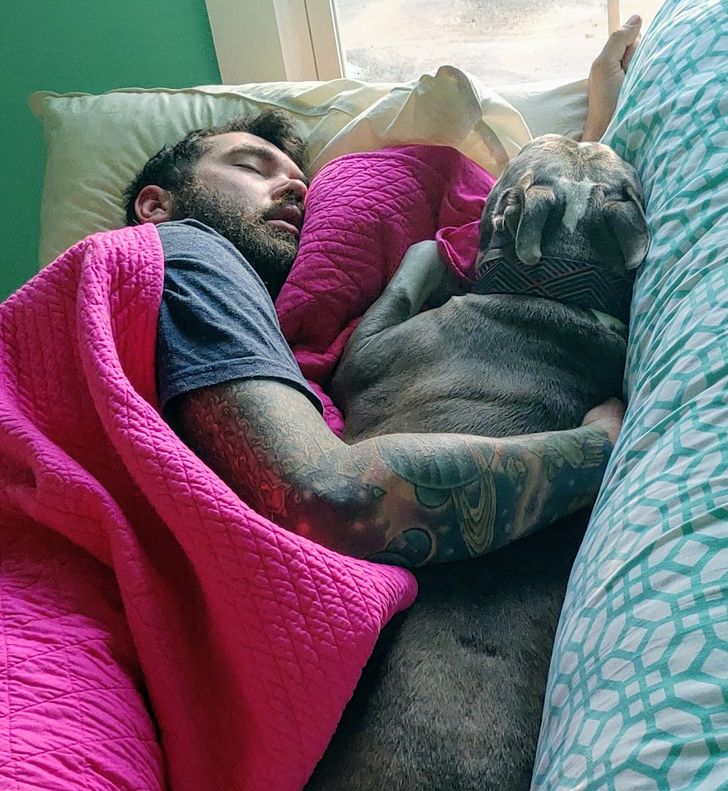 8. “Here’s the photo of Nico and my dad, caught red-handed.” 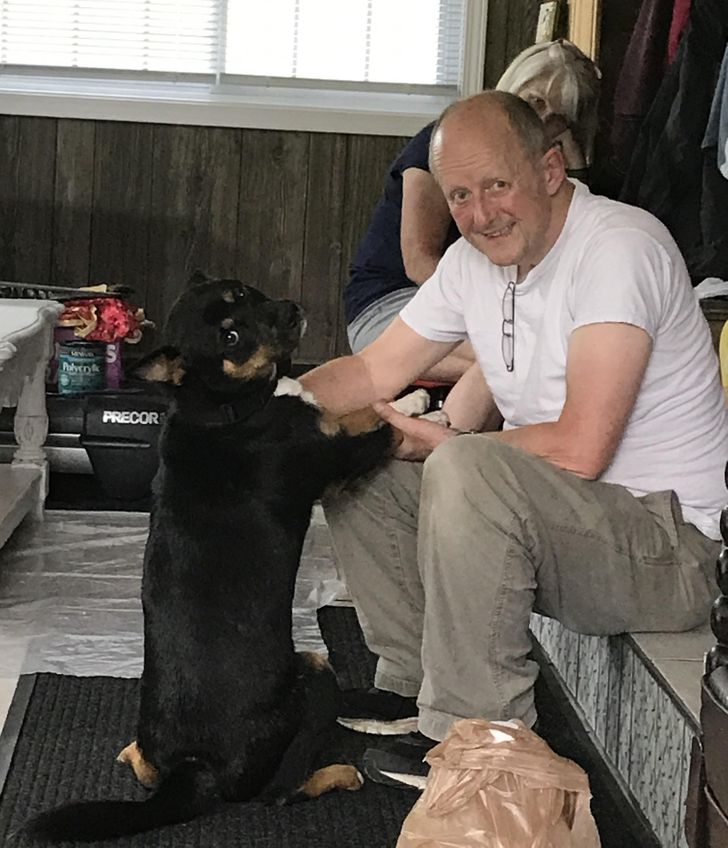 9. “I want nothing to do with this stupid dog. He’s your responsibility.” 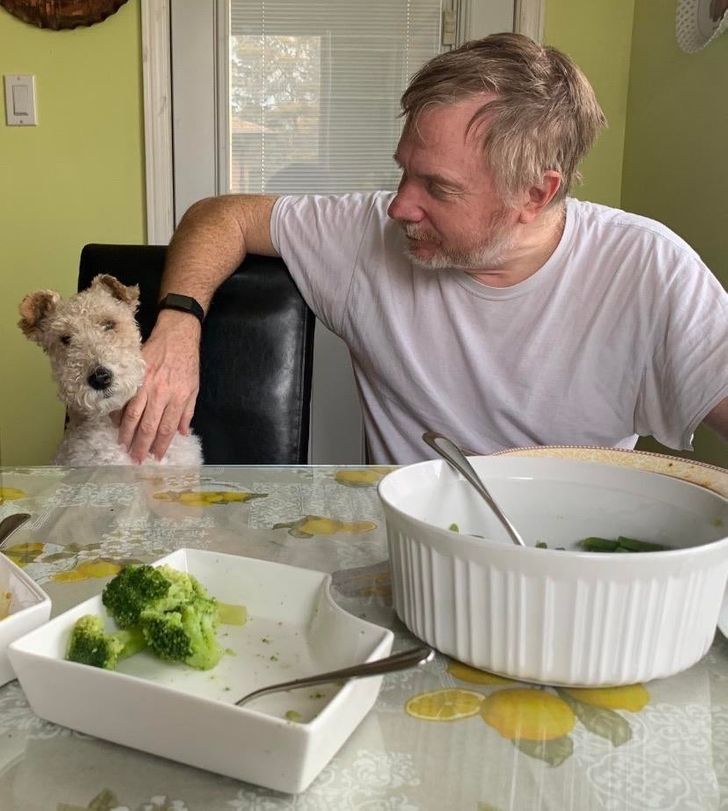 10. “It took 3 years to convince him since ’he’s more of a cat person.’ He finally agreed as long as the pup wasn’t allowed on the bed. This is now what I wake up to every morning.” 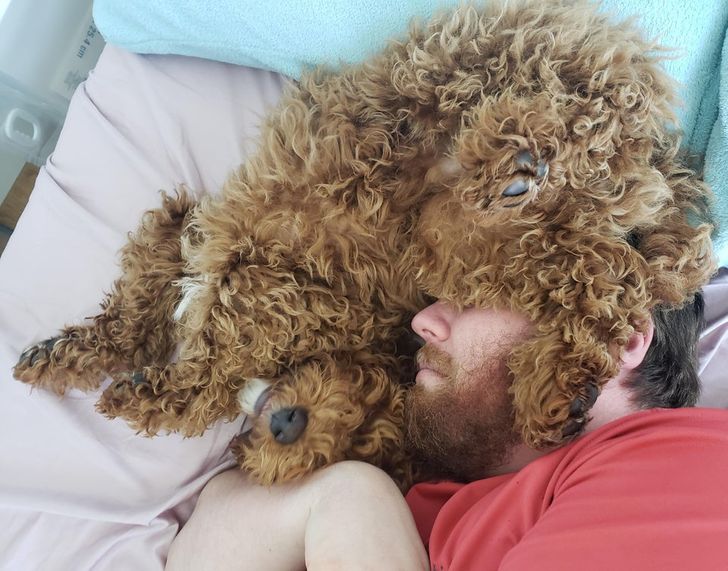 11. “First he said no dogs at all, then he said especially not pit bulls or big dogs in general. Fast-forward to today and my dad has had a professionally built 6-ft fence around their entire backyard for my dogs.” 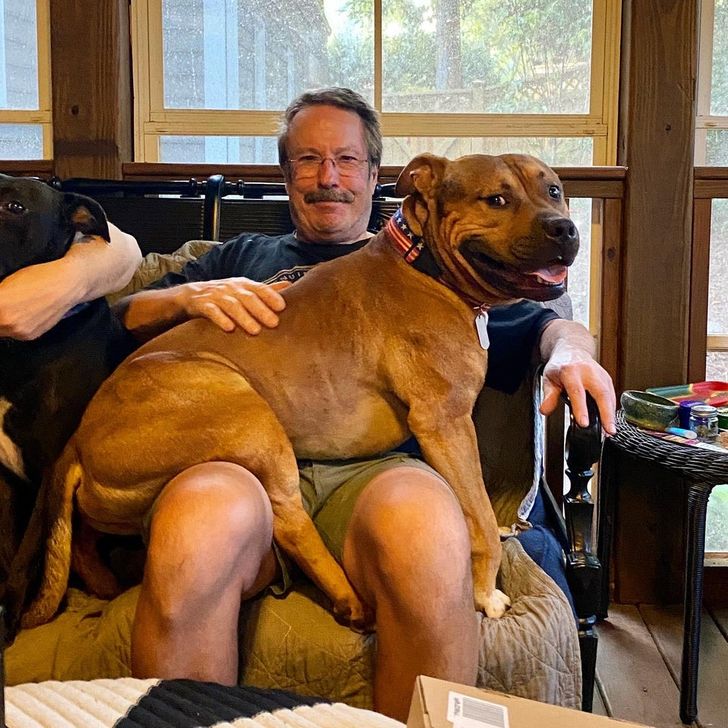 Ah, the warm and welcoming smiles on all of these men. It is beautiful how suddenly a dog can change your ideology and beliefs. I mean they are actually so fun and joyful creatures to have around you all the time, their overprotective and loyal personas are undeniable captivating. I can not stress this enough but dogs are really the best pets you can own and trust me you will not regret it. The stigma about how dogs can ruin everything in the house is so widespread and so false. You have to admit that this is just an excuse made by our fathers to try to convince us not to get a dog as a pet. We have shown you so many examples above, they say false things to brainwash us and in the end, they are the ones who are the most in love with the dog they once did not want in the house. It is all about the training, if they are trained well they would not do anything destructive. Keep on scrolling down to see more of these beautiful pictures…

12. “My dad would never admit how much he loves our old dog. But after finding this picture on his phone, he doesn’t have to.” 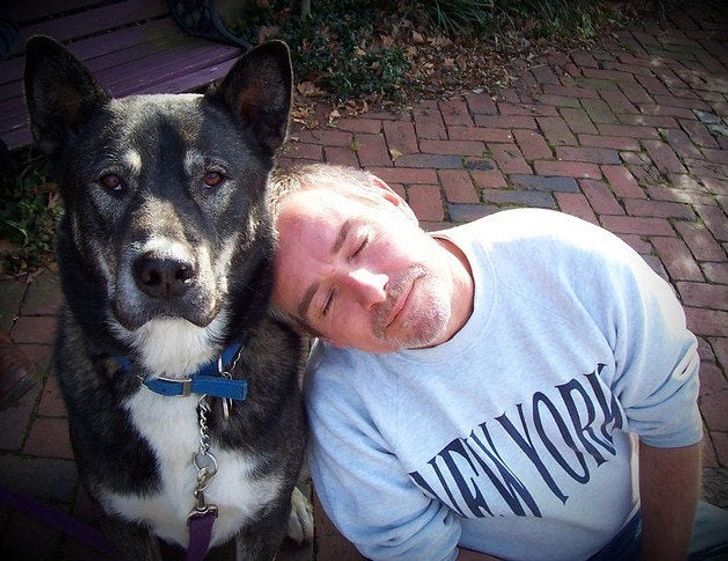 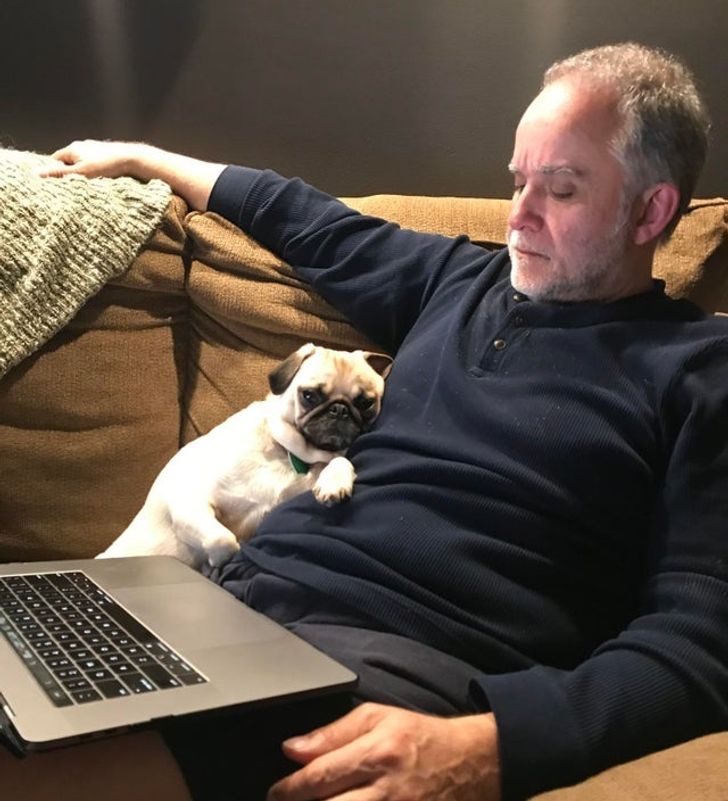 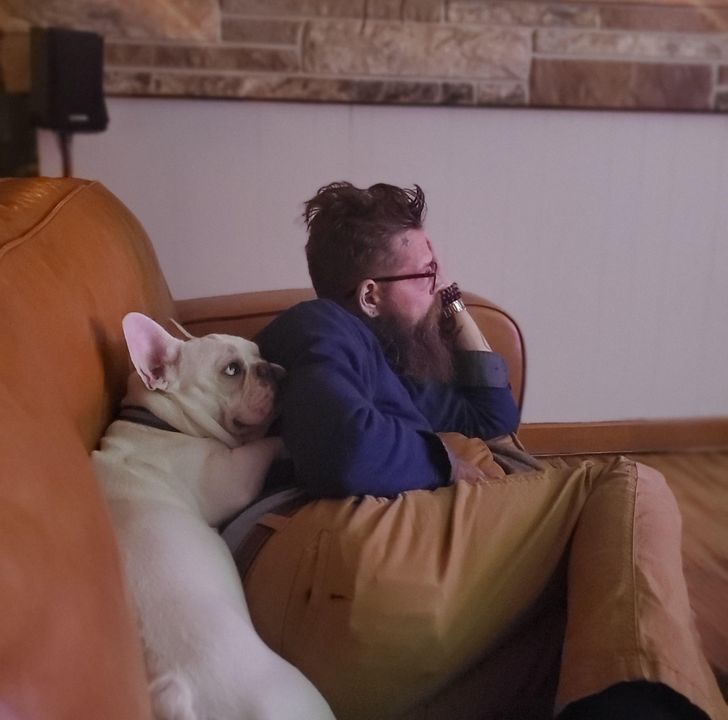 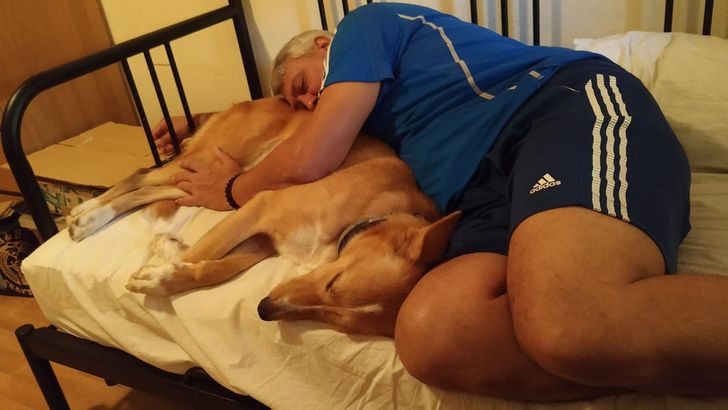 16. “My dad, who did not want me to bring my dog with me when I moved back home, comforting my pup post-surgery” 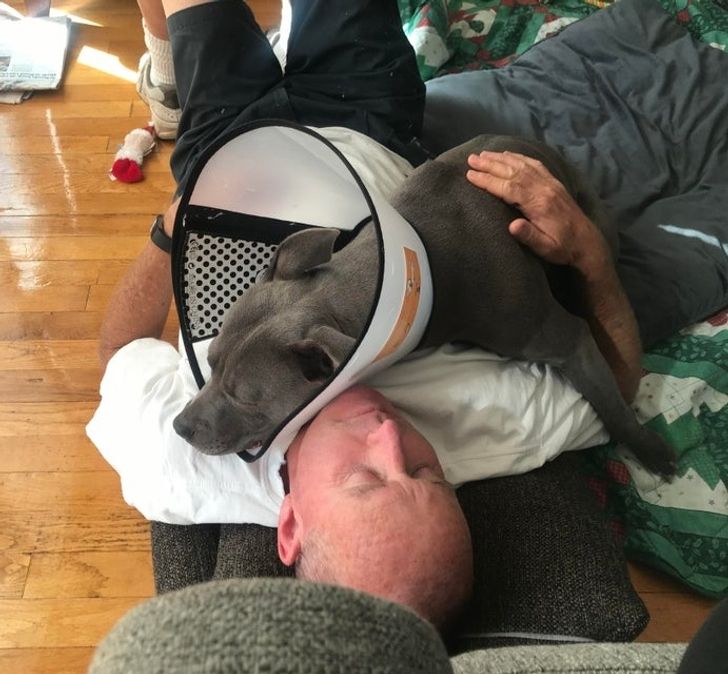 17. “’I can’t believe you brought home a dog without telling me. You know I don’t like dogs that much.’ 10 years later and he carries both dogs to bed every night…” 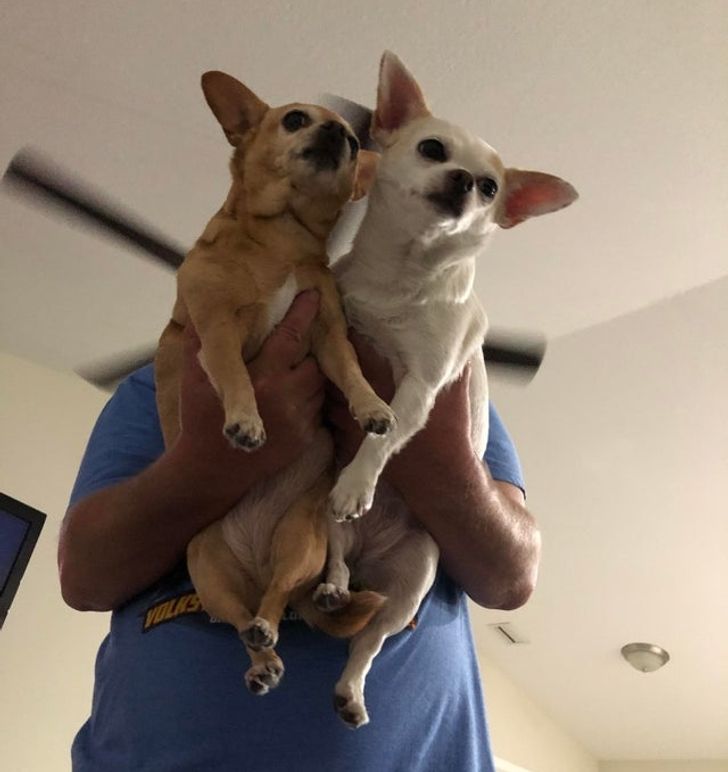 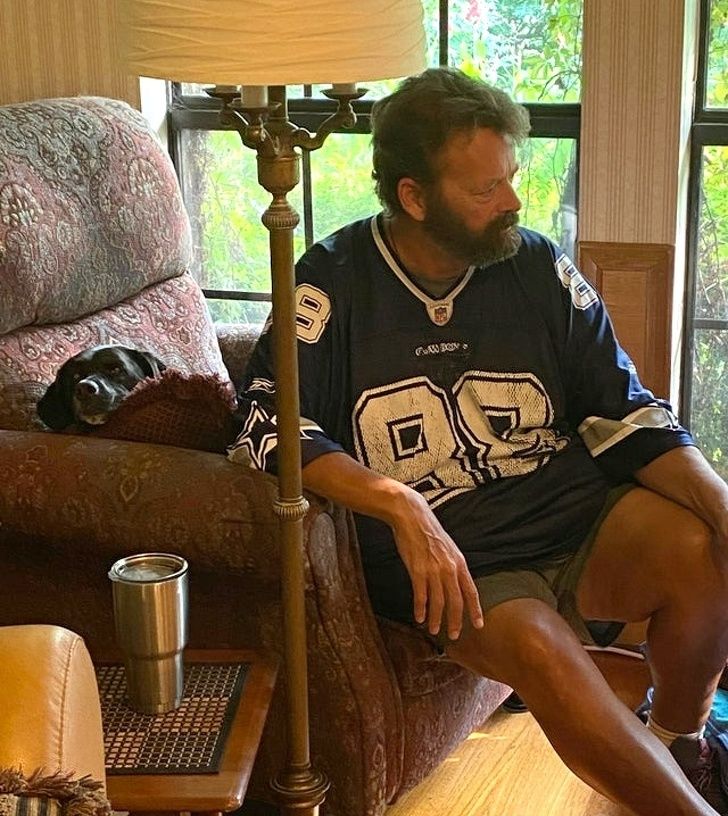 19. “Dad said 2 dogs was enough. Here he is with the third dog Mom brought home without asking.” 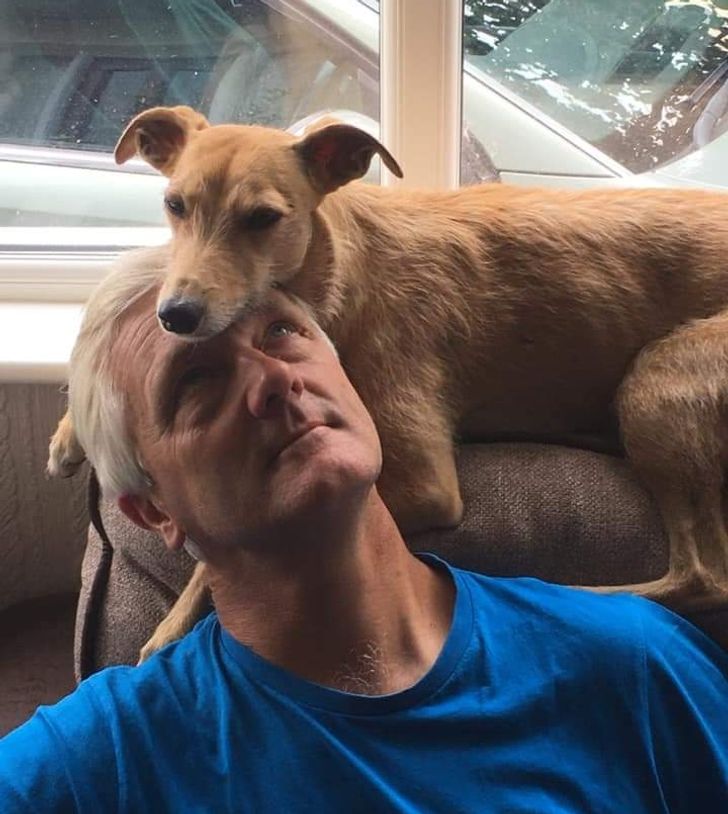 20. “Meet my husband who never wanted a small dog. Now he sleeps like this every night.” 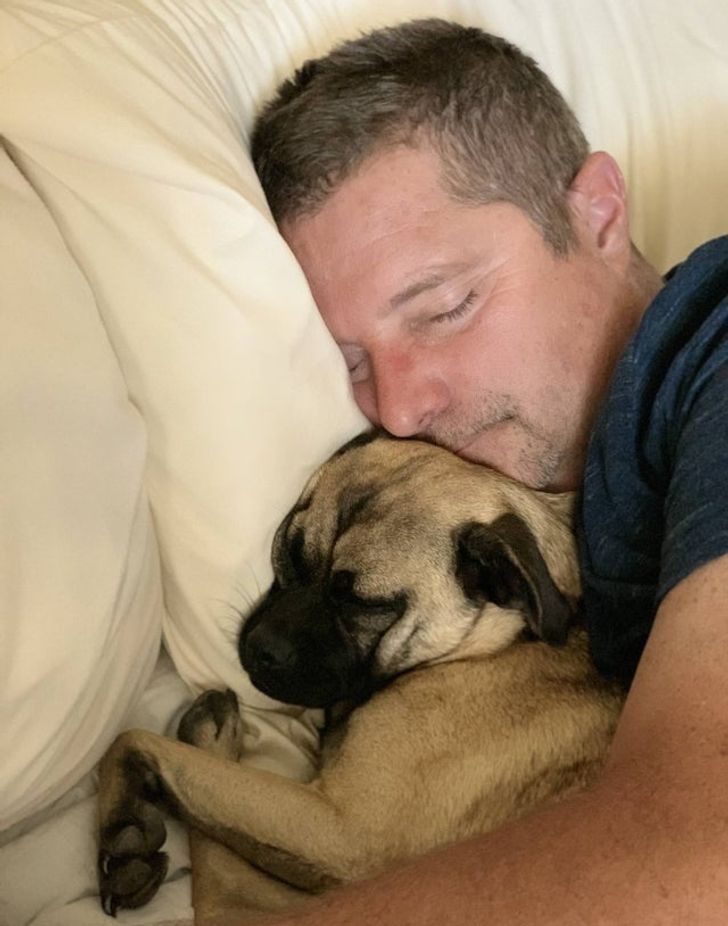 21. “I’m allergic and have asthma! It doesn’t matter if he’s hypoallergenic.” 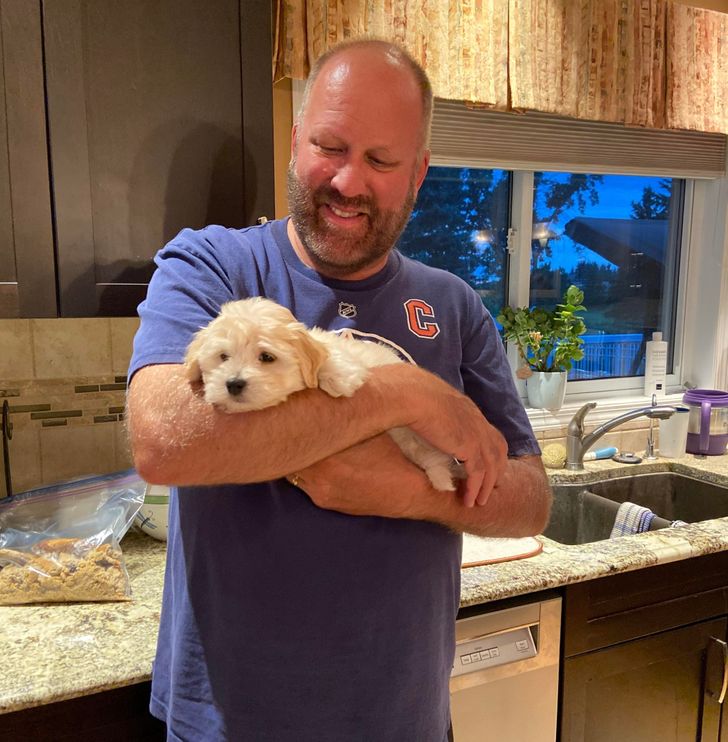 22. “Dad then: ’Dogs are too much responsibility.’ Dad now: ’The dog is my favorite family member because he goes to the park with me every morning.” 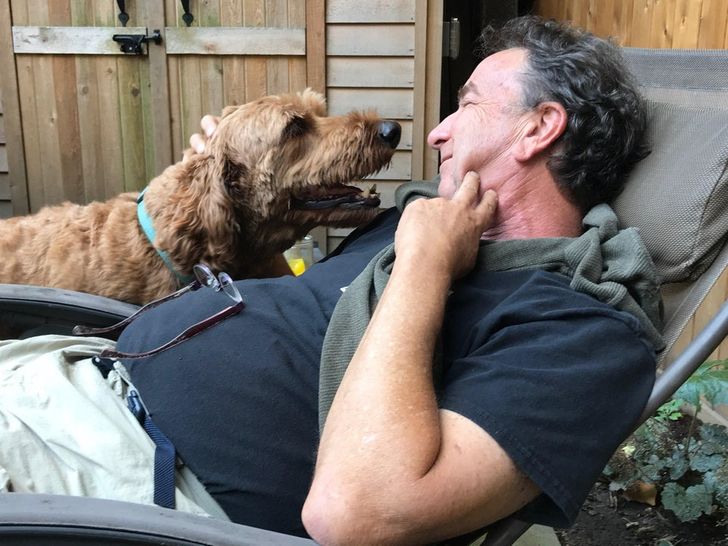 The last picture is super cute and heartwarming. This is the reality of every man who denies their love for dogs, I mean who can not fall in love with dogs? They must be aliens or something else, once you have a dog in the house it is inhumane to not love it. Their cuteness, their sweet behaviors, their incomparable loyalty and playfulness are just too much, too adorable to not fall in love. All of these pictures were so wholesome, I really loved each and every story. Truly, so beautiful they were. Have you ever experienced such a situation with the men in your household? Share the story of how your fathers or husbands fell in love with your adopted dogs even though they really despised the idea of having dogs as pets, we would love to hear your experience so do not forget to tell us in the comments down below…