It is said that strict parents raise the best liars. So, what do controlling parents raise? Well, they raise a bunch of rebels. Dealing with teenagers is not an easy job. They’re moody, misunderstood and confused creatures. Parents usually have a hard time dealing with their teenage kids. The best way to tame teenagers is by becoming their friend and giving them the reassurance of being understood. There is no way controlling parents can handle their teenage kids.

Being controlling might work on kids under the age of 13, but not with teenagers. You can’t make them do things by threatening them. Not only is it useless, but it is extremely wrong as well. No one can  threaten someone in doing things against their will. Reddit is full of amazing stories that highlight a lot of issues, even the ones that are less talked about. Today we bring you a story of a controlling father who thought his daughter’s dance dress was inappropriate. So she has to wear his T-shirt to the dance practice or else no more dancing. The 15 year old was so upset that she refused to visit her father at his house. Scroll down to read what happened exactly.

OP’s daughter is a talented dancer. 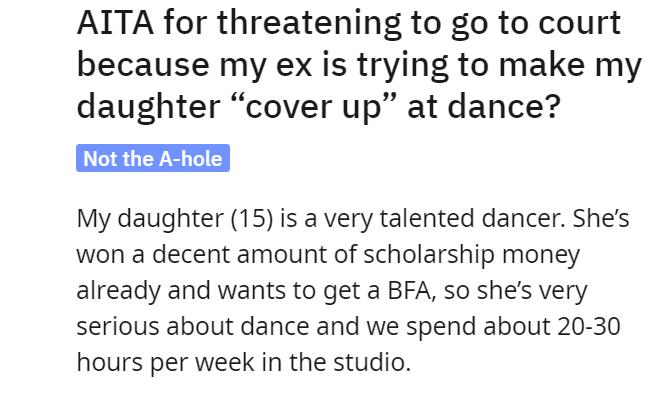 OP’s ex wants their daughter to wear his t shirt over the dance outfit.

He thinks the cloths are inappropriate.

OP stepped in for her daughter.

The OP is simply trying to let her daughter live her dreams. OP’s ex is being unreasonable here. The dance outfit is the same for all the dancers, including OP’s daughter. Above all, it is as instructed by the choreographer. It is not that their daughter is deliberately dressing up like that. It is a requirement for the dace practice. There’s no point in being so damn possessive and controlling. This is simply ruining the ex’s relationship with his daughter. She is so passionate about her dance, and she’s pretty good at it too. OP’s ex needs to take a chill pill and relax instead of controlling his daughter.

Wondering what his reaction would be towards his son in wrestling attire. 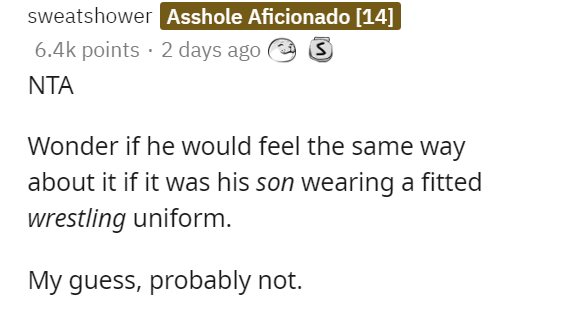 You do as you’re told. 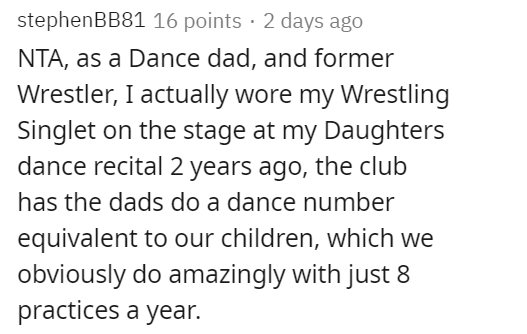 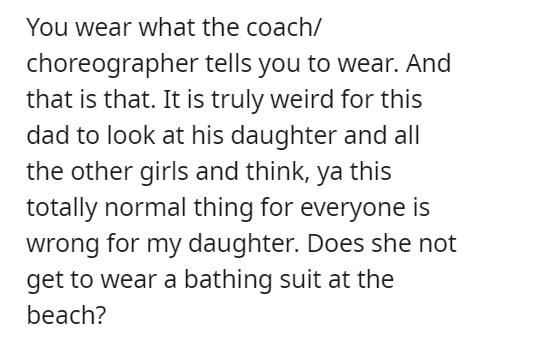 This situation is alarming.

Ex is trying to control OP and their daughter. 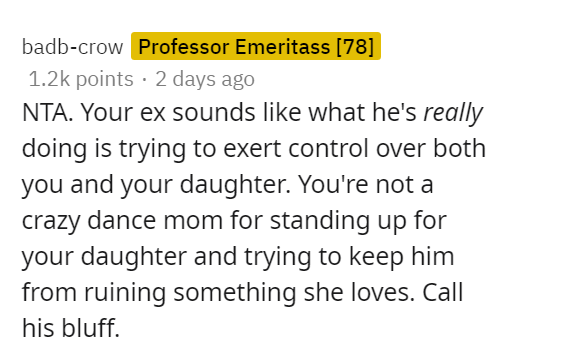 Sometimes controlling nature of a parent can get them in unwanted trouble. Everyone has a distinct personality, and they have the right to live the way they want. What do you guys think about this story? Let us know in the comments below.