Everyone gets angry once in a while.

Some more than others but that doesn’t give you an excuse to destroy someone else’s property just because you can’t keep your temper in check. I have known a lot of people with anger management issues and they not only ruin their lives but of the people around them as well. This woman apparently was the embodiment of Karen because not once throughout the whole story was she sorry for what she had done.

We see many stories with people exhibiting behaviors generally related to Karens but what is the real problem here? Well, I can’t say I am aware but what I do know is that this woman got what she deserved. You can read the full story by scrolling below and taking a look for yourself.

Anyone can make that sort of mistake, I know I have on some occasions. 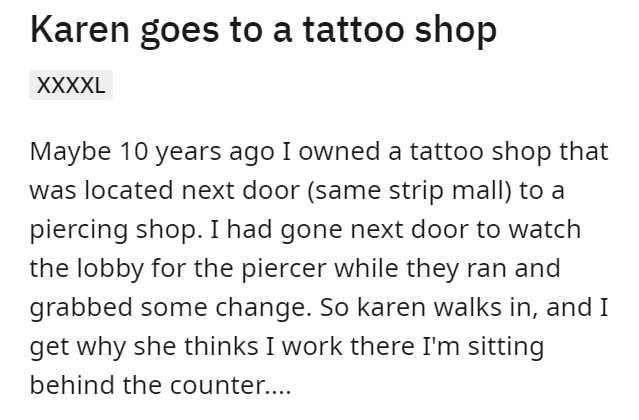 How could she remember her when she doesn’t even work there? 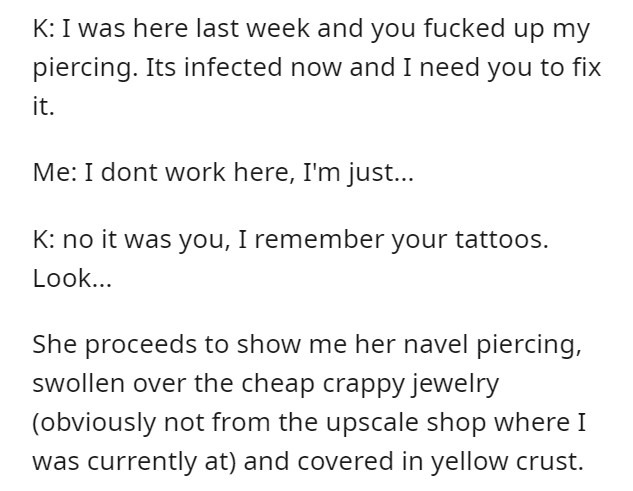 Did she think if she says it enough, it will make it true? 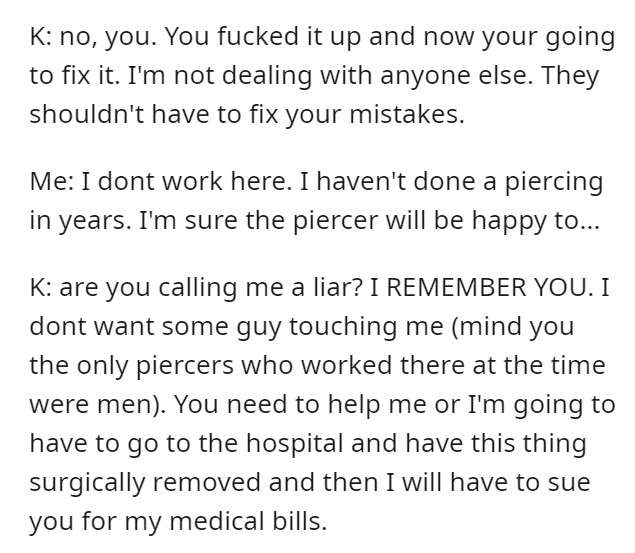 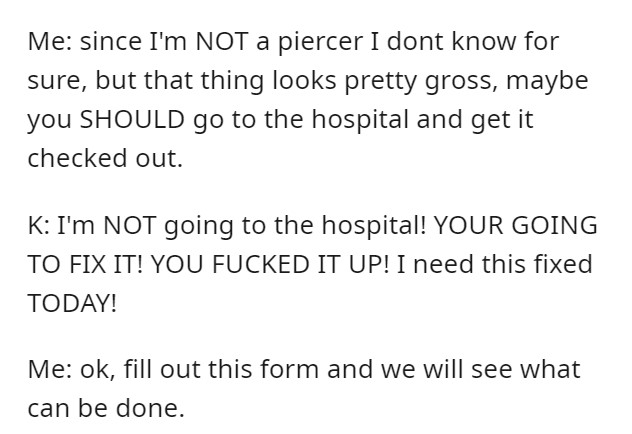 You would think this is where the story would end but this is only the beginning. 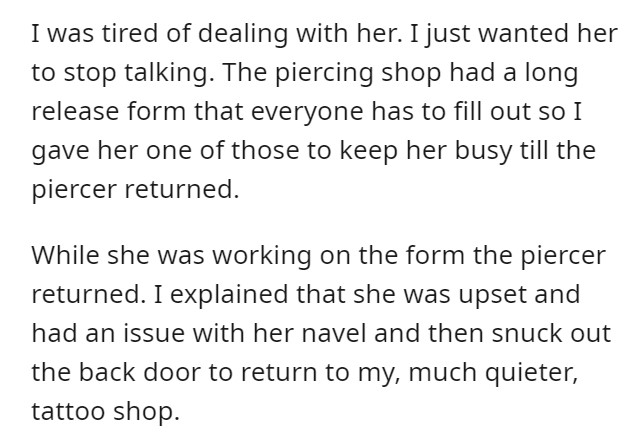 I am seriously starting to doubt that she is right in the head at this point. 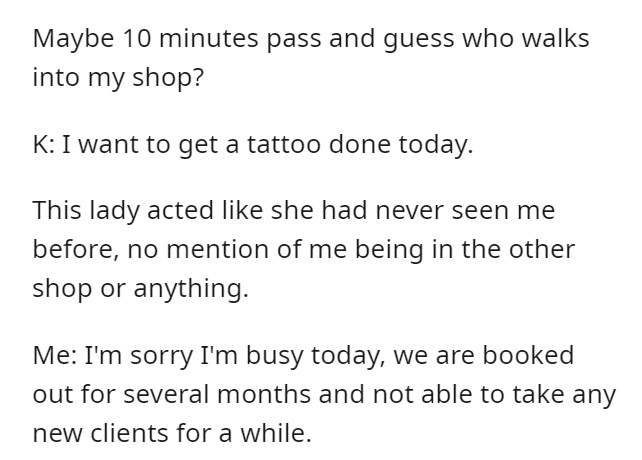 No normal person would act this way, right? 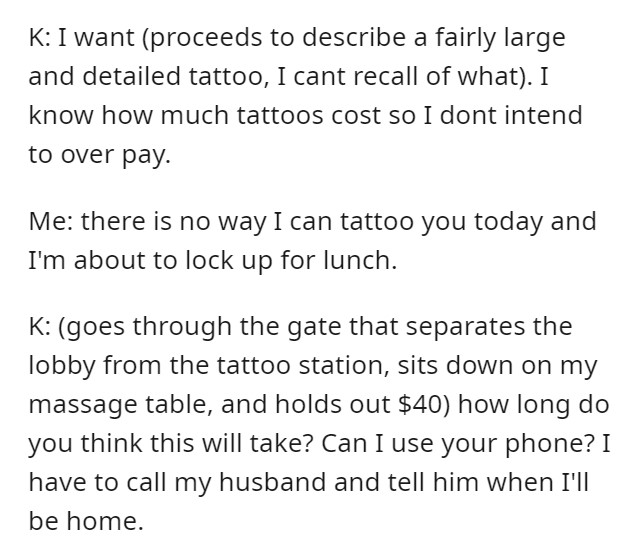 I only wish you could get a good tattoo so cheap but that is not how this works. 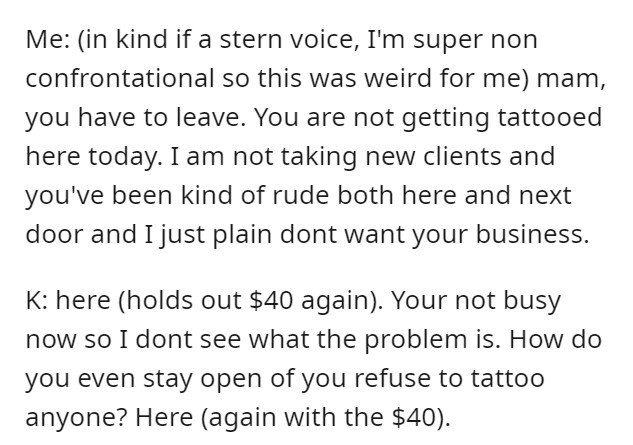 And you usually have to book an appointment for reputable tattoo shops beforehand. 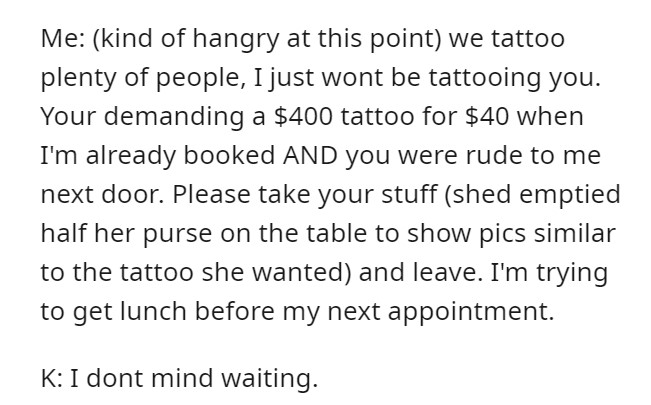 I am surprised you were willing to put up with her for this long. 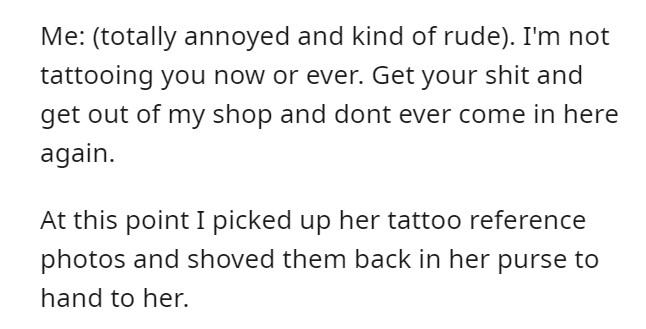 Surely, this is the end? I mean she did get kicked out, right? 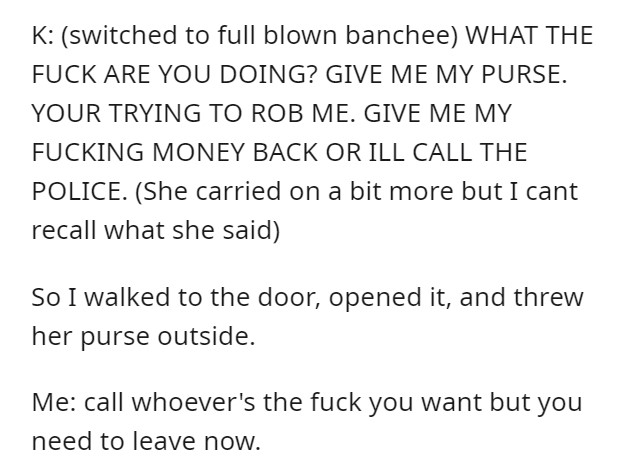 Well, this is where things took an even more heinous turn. 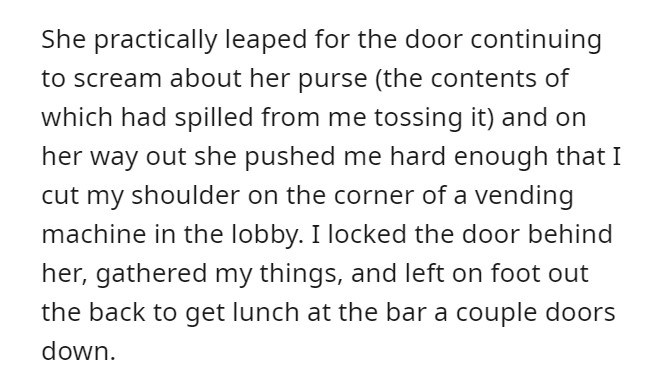 At any tattoo shop I’ve been to if you are under 18 they kick you out, if you attempt to walk back they’ll throw your ass out, and if you attempt to destroy anything at all they will seriously do damage to you.

I had a girl tell me the place I usually go to wouldn’t give her and her friend a BOGO deal for her and her friend and continued talk so much crap and I looked at her and said at least my lines are straight and I know everything is clean, unlike your house where you get yours done at. I hate when people talk crap about tattoo shops.

Yes, they may not be busy right at that second but it does not mean they’re not waiting for an appointment. –bnr090909

Just when you think things can’t possibly get any worse. 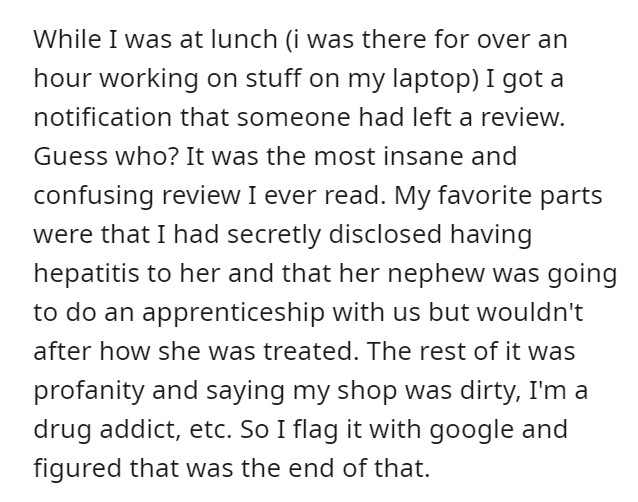 They just took a whole new turn and this is when this woman turned into a full-blown criminal. 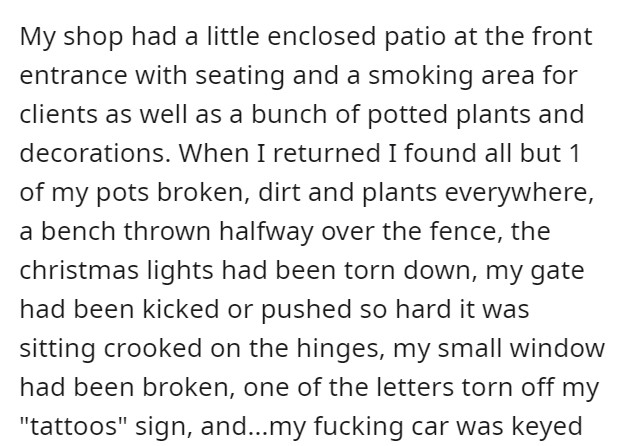 This woman needed to get what she deserved but how could they find her? 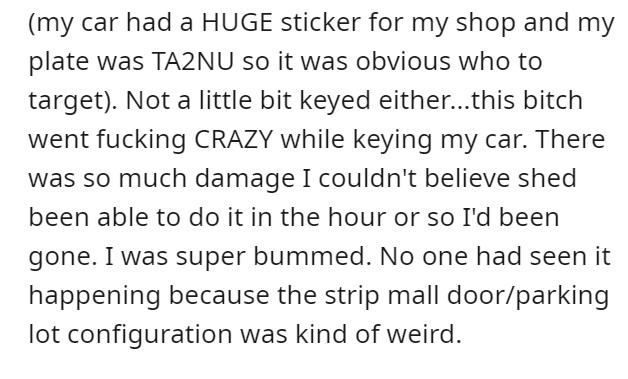 Obviously, the next step was to call the cops which the tattoo shop’s owner did.

That was not all, the piercers had not fared well either when dealing with her. 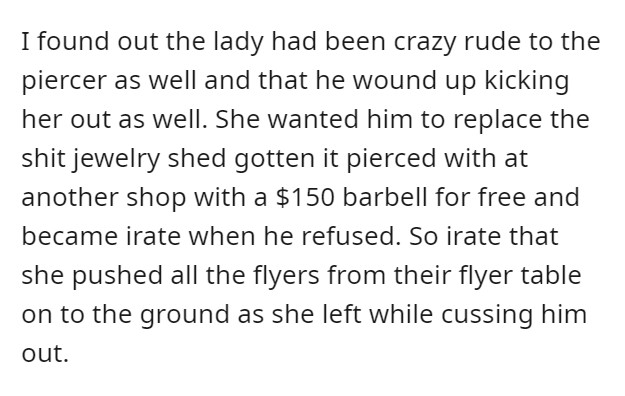 Remember the release forms she had filled out in the beginning? 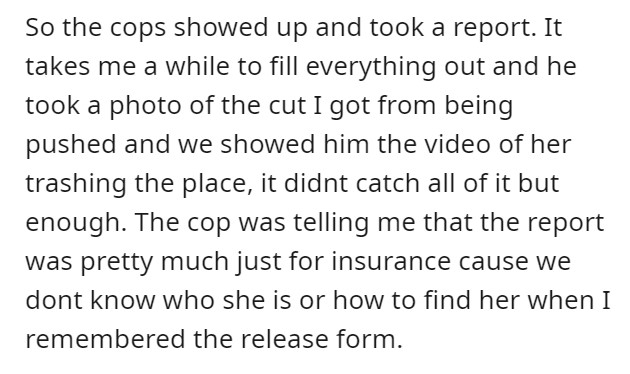 Thankfully they came in handy and the police were able to find her current address. 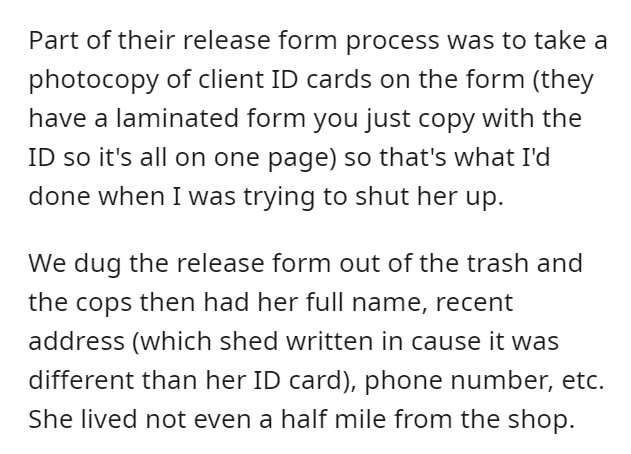 So she actually did have to face jail time which was fair if you ask me. 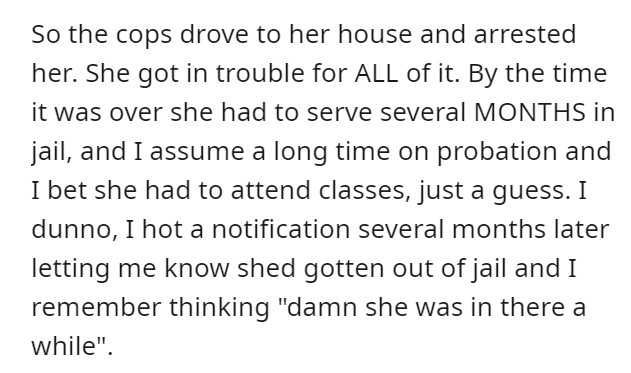 As it turns out, they did have money but apparently, she was just a cheap person. 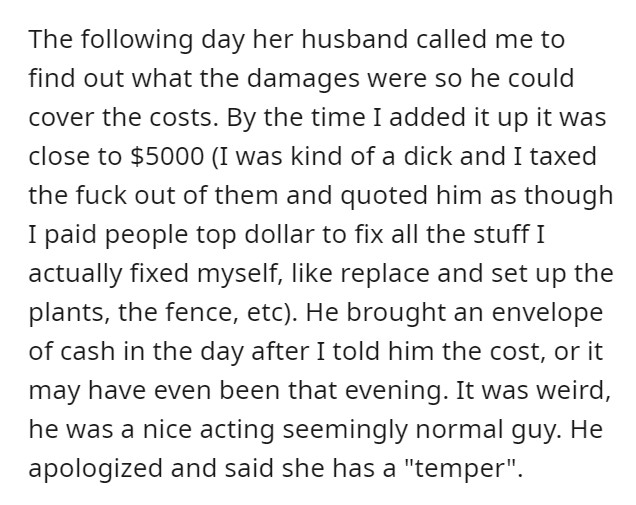 It is also clear that she did not learn her lesson even after serving her time in jail. 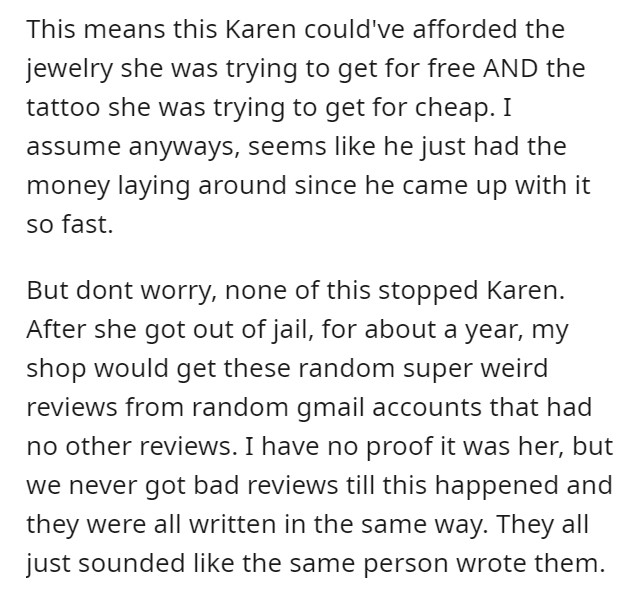 Clearly, the classes did not help her as much as she needed. 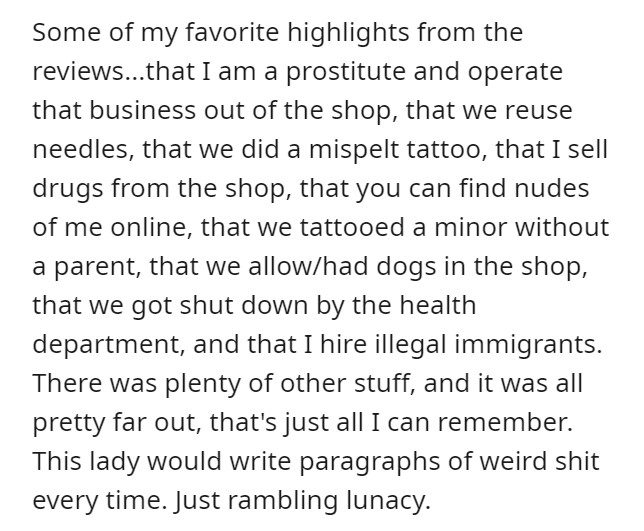 I have heard many Karen stories but this one might just take the cake. 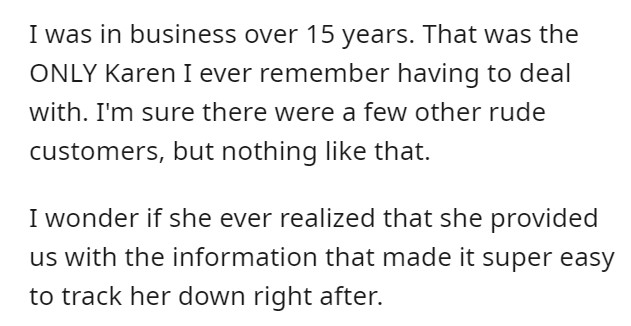 After reading this, I don’t think this was not just a Karen, but someone with some serious mental health issues. This goes above and beyond normal Karen behavior and suggests some bigger problems that have not been diagnosed. –Hydra_Master

I honestly feel bad for her husband, he seemed like a nice enough person. 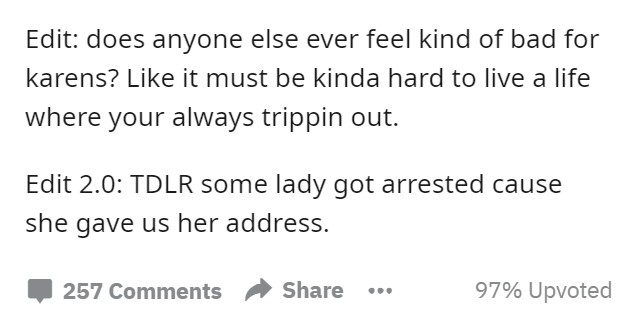 Have you ever had to deal with a Karen? If so how did it go? Comment down below and let us know.