‘There is always some good in people.’

That is what many people like to think. And while I used to be this optimistic when I was a kid, I have learned that it is clearly not true the hard way. So there really is no point in trying to change someone. As a once intelligent person said, ‘You are dating the person they are right now not the person they could if you just try hard enough.’ Because we would like to think we have the power to influence someone like that but we rarely do.

And even when we do, we look back and all your life has already gone by. All that to say, if you see any of these red flags, just run and never look back. Don’t keep them as a friend no matter how many whiny messages they send you. Trust me, It’s not worth it. I shouldn’t even have to tell anyone this since the ‘nice guy’ subreddit is taking off and sadly that is not a wholly good thing.

Following are just some of the examples of the antics these self-proclaimed nice guys get up to.

#1 If all else fails, bring religion into it. That always works.

#2 I have never once met a girl who actually said, ‘I only date cheaters.’

#3 Somebody sounds just a tad bitter about where their life is going.

#4 Have you ever seen a more respectable gentleman? Because I certainly haven’t.

This has got to be jokes.

The self-awareness scale can only go so low.

to get an accurate reading of this guy’s blindness to his own behavior, we’re gonna have to dig underground. –redblackblueandyou

#5 Some girls like to use their hair as a security blanket, let them be.

#6 Of course, Why not throw a bit of victim-blaming in there as well?

This is so dumb. People think abusive relationships start that way when in reality they very rarely do. Abusive people can be really good at coming across as friendly, loving people who slowly get more and more abusive. Or they snap all at once out of seemingly nowhere. –SanguineLaws

#7 I hate when anyone uses the phrase ‘like men’, what is that supposed to even mean?

#8 This is a big red flag for why you never meet a stranger in an unknown place.

#9 Why not blame everything on women? That seems like a good way to go.

#10 This is just straight-up making me nauseous and I’ll leave it at that.

#11 This guy has clearly too much time on his hands. He should use that to learn to act like a decent human being.

Ah yes, such a nice guy that, when women overlook him, he does something despicable to ensure that they made the right choice. Such self-sacrifice. –LadyLikesSpiders

#12 He really is flip-flopping between those responses a lot.

#13 Whenever someone has the need to say ‘I am a nice guy’. They are clearly compensating for something.

#14 Is it weird to say I hate the purple devil emoji? It sends a shiver down my spine and not in a good way.

The Nice Guy: “I’m done being the nice guy.”

Others: “You mean… he wasn’t the nice guy all this time?”

If you’re “done” being nice, you never were nice in the first place. Nice people don’t just flip a switch and become assholes. They stay kind through thick and thin. If you decide to “stop being nice”, it means you never were nice, you were just faking all this time, and now you’ve decided to take the mask off. –Sailor_Solaris

#15 This has to be ironic. If not I lost the faith I had left in humanity.

#16 Or it might be he did that to save his friend without wanting something in return. People like that do exist you know?

#17 I wasn’t aware getting inked automatically means you are a bad person. What a revelation!

#18 So he was basically a creepy stalker but she is the one in the wrong in this situation? Seems legit.

He straight up stalked her without knowing her, and also decided she had no future and no plans based on… what? Her having some tattoos and risqué pictures? For all, he knows she’s at a successful law firm too. –gorgon433

#19 I do somewhat feel for this guy. Tinder is infamous for guys not getting any matches at all. 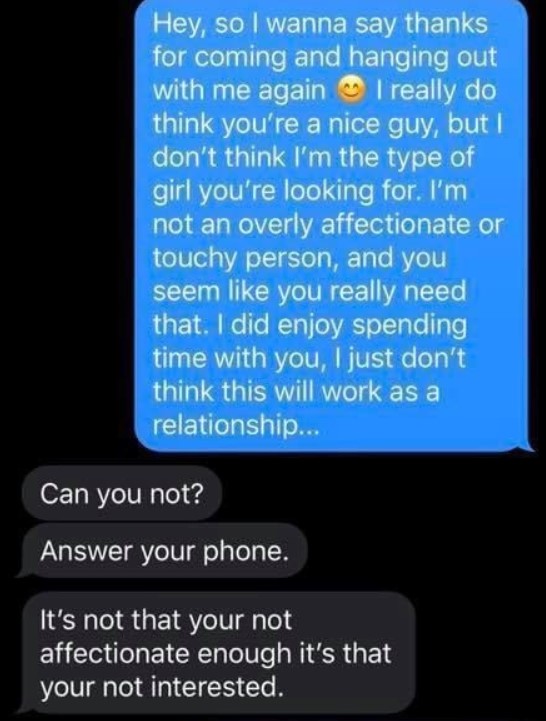 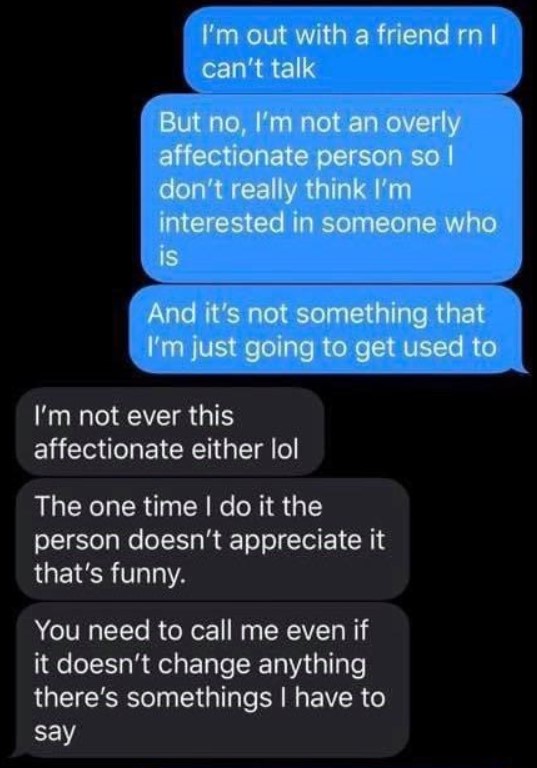 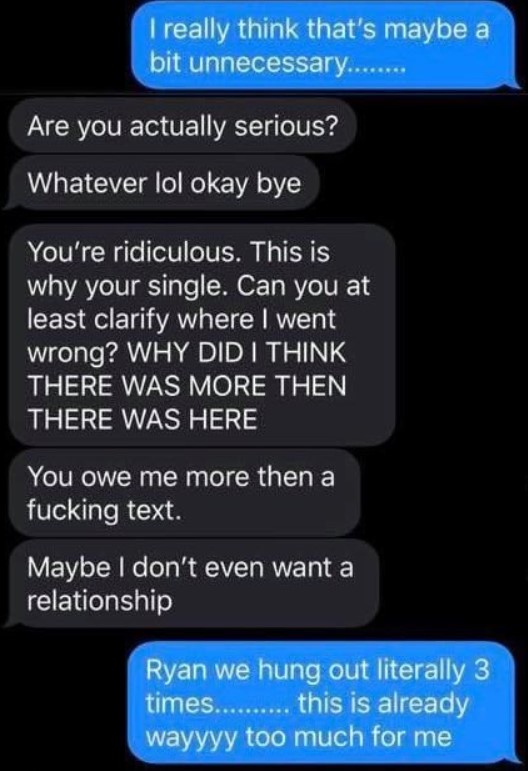 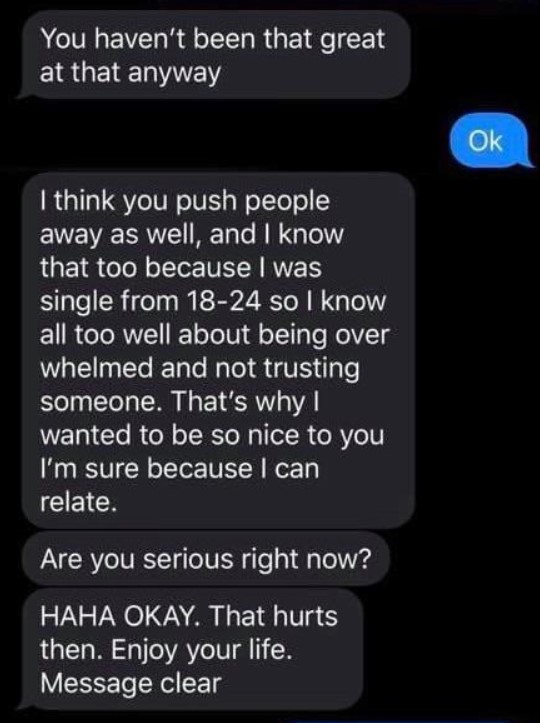 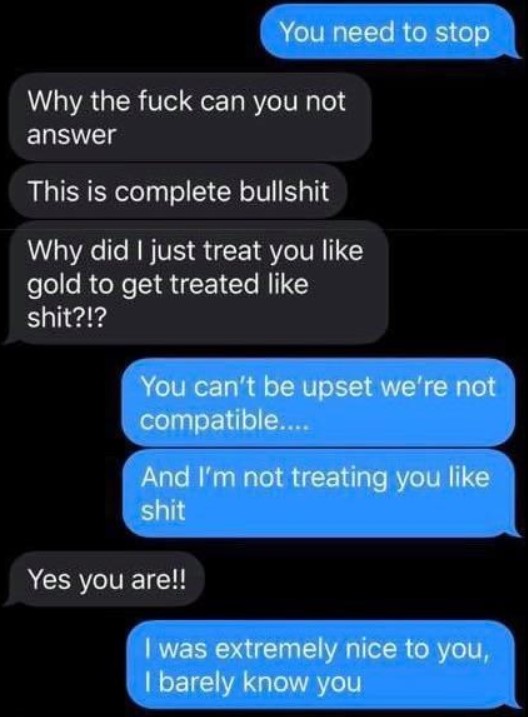 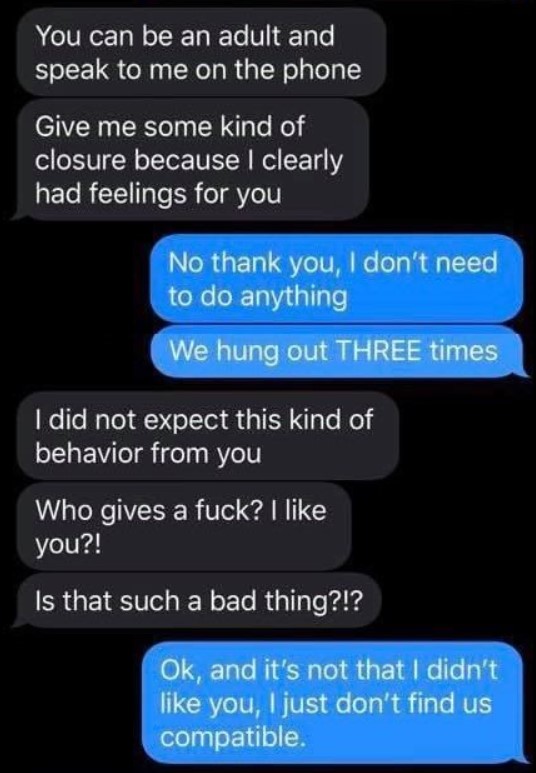 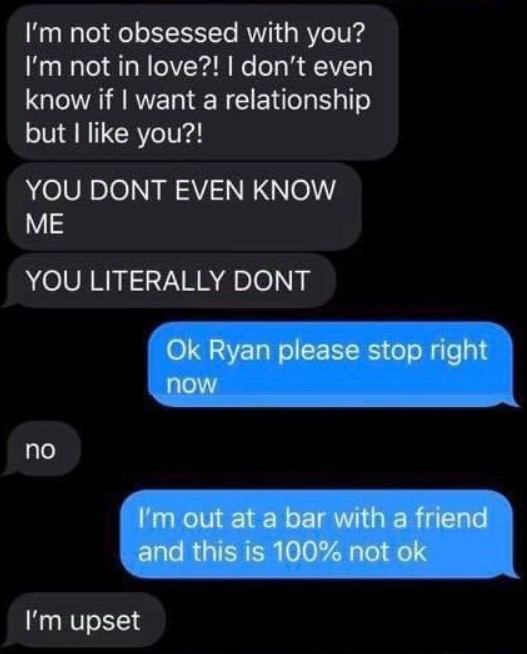 What are other red flags that you spotted in your past relationships? Comment down below and let us know. 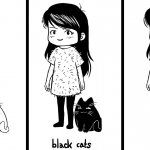 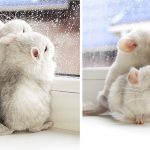 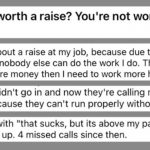 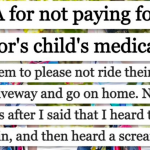 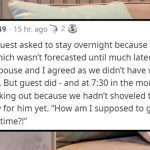