A company’s bureaucracy can often be a pain to deal with.

And that is especially the case when you need a very simple task complete. Complex issues, sure they will put in some effort, but when it is a very simple thing, they will deal with it like it is of no importance. And then having to deal with these entitled people, sitting comfortable on their chairs not doing the only thing they are supposed to do, can be an even bigger pain in the a$$.

Such was the case with this one Redditor who found this type of bureaucracy in their credit card company. This person had a recent name change in his legal documents and had to put in a request to their credit card company to update their name in the record and issue a new credit card. Sounds like a very simple task, right? But they decided to make things complex for no reason. OP had had their social security card, insurance card, and driver’s license updated without any trouble, but this credit card company was creating some very irrelevant problems. They kept saying they haven’t received the required documents to make changes to their credit card even though Redditor had sent it multiple times. So this frustrated customer decided to fax them the name-change document 130 times through fax there is no question remains about not receiving the document.

1. OP got his name legally changed because they didn’t like how their first name was spelled. Fair enough. Their name, they can do whatever they want with it. 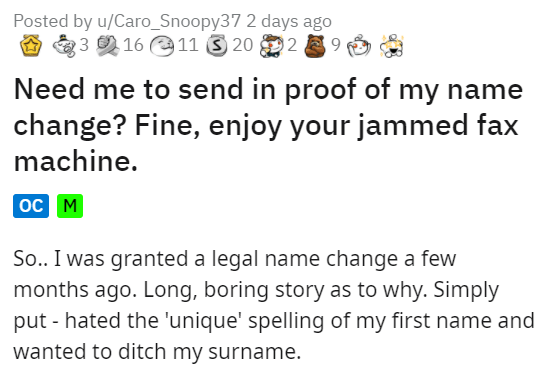 2. When you get your legal name changed, you have to update it everywhere and OP faced no problem doing so until they contacted their credit card company that kept saying they didn’t receive the name-change document even though OP had sent it. 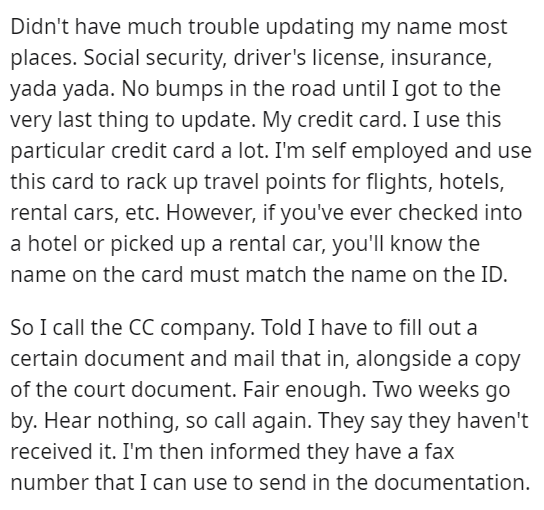 Ah, so it’s one of those companies who just do not want to cooperate no matter what.

3. It had been 4 weeks since OP was trying to get their name updated and even after they had sent the document multiple times through email and fax, they would still say the same thing that they haven’t received any document. 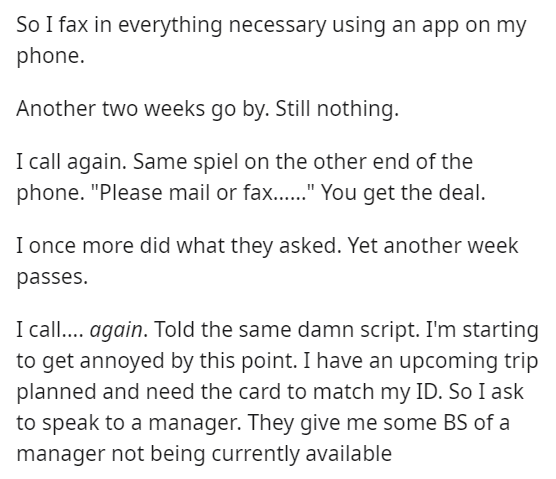 When they say the manager is not around, you know they are playing some scheme and just don’t want to attend you.

4. OP decided to formulate a new strategy, and that was to keep faxing them the document over and over again until there was no doubt left. 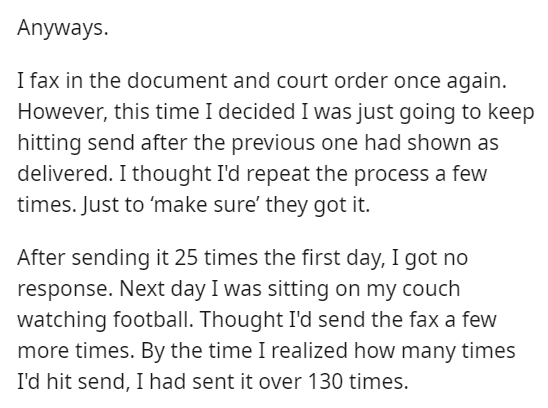 I wold be so mad if I suddenly receive 130 faxes one after the another but in this case, I fully side wit OP. This is exactly how they should be dealt with for ignore his request time and time again.

5. Yo, it actually worked. OP got a new credit card within the same week of jamming their fax machine. Way to go! 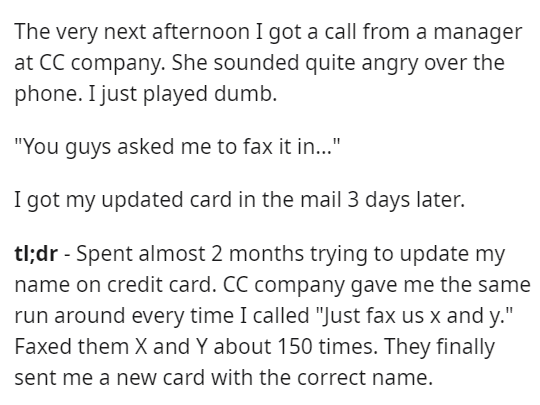 Why do such companies force customers to become evil? They could’ve easily updated the caerd from the first documents that h had said but no, the esteems are too high to do that. Well then, deal with the consequences .

Here are some of the responses on the story:

6. OP’s experience wasn’t unique, many people have faced this problem of companies denying any receipt of documents. 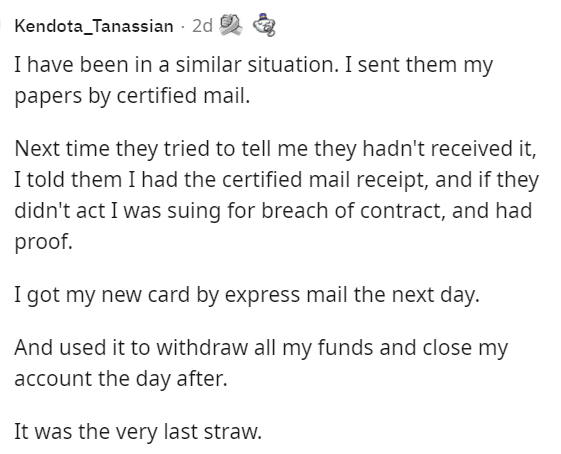 7. Just fax them the thing couple hundred times to be on the safe side. They’ll receive at least one. 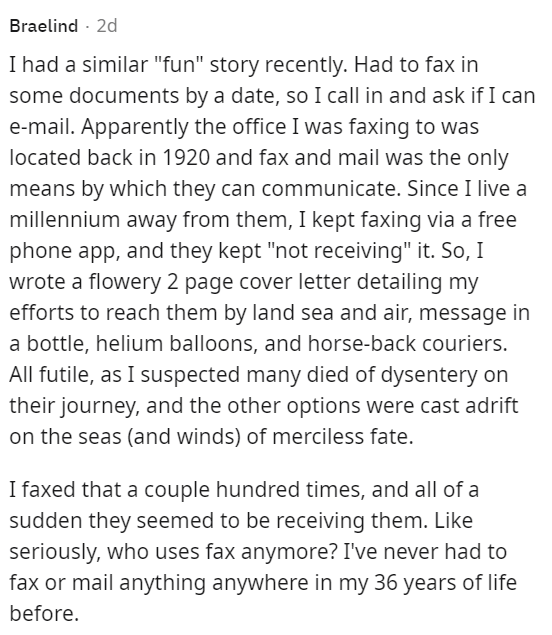 8. I will never understand what joy do they find in stalling the process. 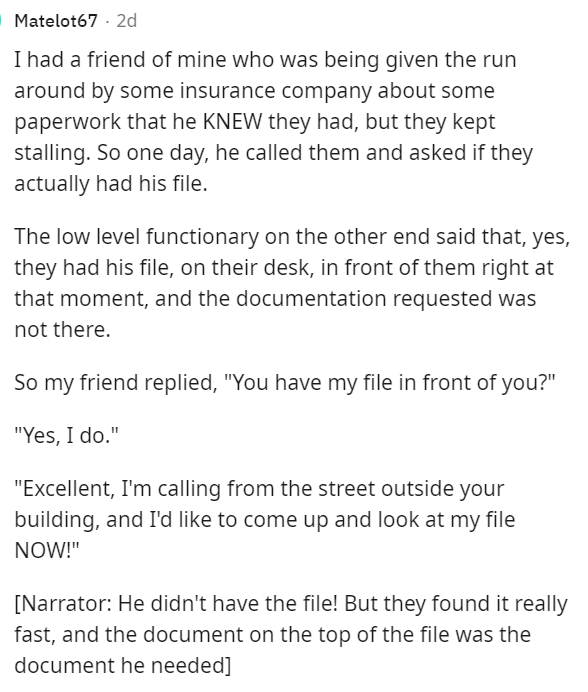 9. Not just the credit card companies, all companies are culprits. 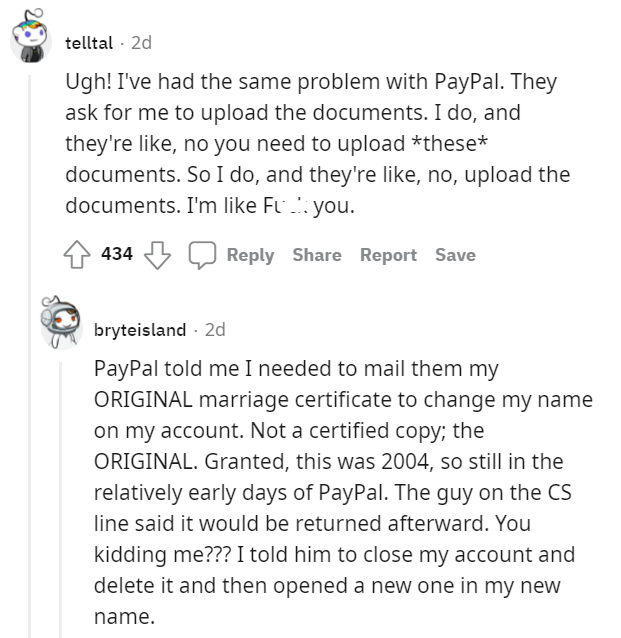