Being a pizza delivery person is not easy.

It is a hectic job. You have to ride the bike and deliver the pizza before it gets cold. So no matter what the weather is, if it’s raining or if you’re delivering in the scorching heat, time is of the essence. Most customers don’t care whatever conditions you are delivering in, or if the late delivery was the restaurant’s fault instead of your’s, they will lash out at you. So the job can be pretty tough for some as you have to work under a lot of pressure. This is why you should always tip the delivery person whenever you order food at home. If you can afford to eat, you can also leave a tip.

However, these delivery men and women get to see loads of people every day. Everyone loves pizzas and you are constantly delivering to a lot of places, seeing all sorts of people and having weird or funny encounters with them. So this Tumblr user is a delivery girl and she keeps a list of “notable” people that she has delivered pizzas to, and it is a hilarious thread that you really need to read. Scroll down below to read her incomplete list of notable people she has delivered pizzas to:

The girl has been working for a year as a pizza delivery girl and keeps a note on her cellphone named “WTFPIZZA” where she keeps track of all the “interesting” customers she has delivered to. It makes for quite a read. 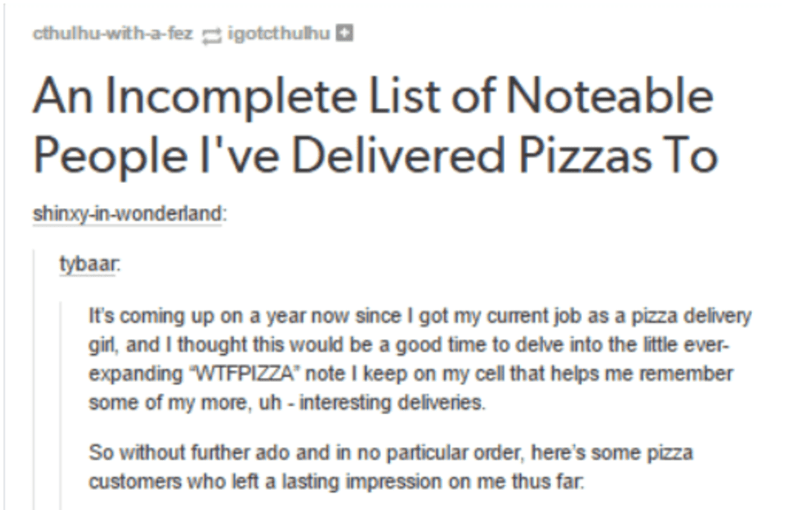 From people who wanted to baptize her and elderly women who wanted her to load guns for them, the list is wild.

But a shoutout to the Batman who did the voice is mandatory. And the EMTs eating pizza next to a smouldering house fire is just me with life. 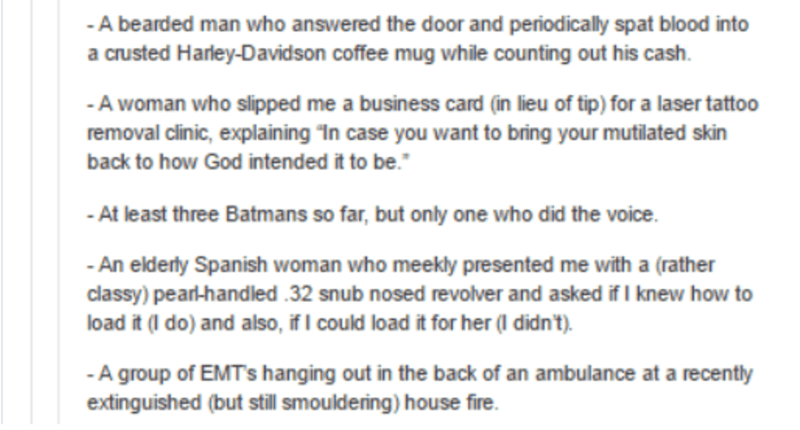 I would not demand money from the guy who had an unsheathed katana.

However, I would have stayed and partied with the McGonagalls. 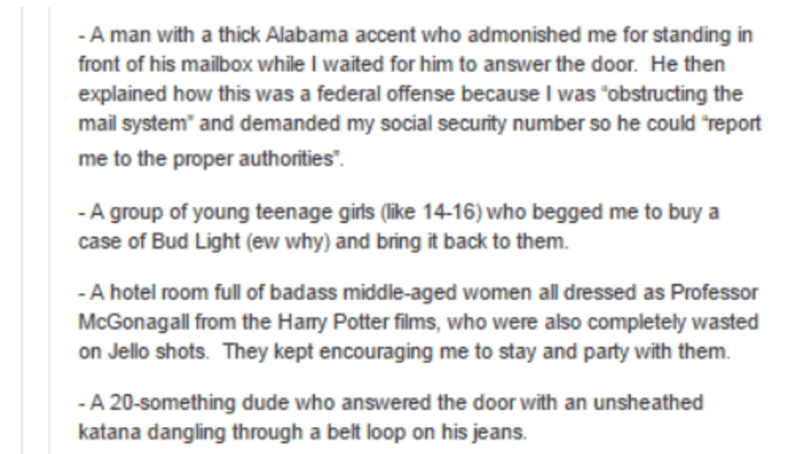 Apparently, people think delivery girls are drug dealers now. The guy who gave the tip because of his daughter was so wholesome.

And if I were her, I would have gone back and keyed the woman’s car who admonished her for driving a Mazda. 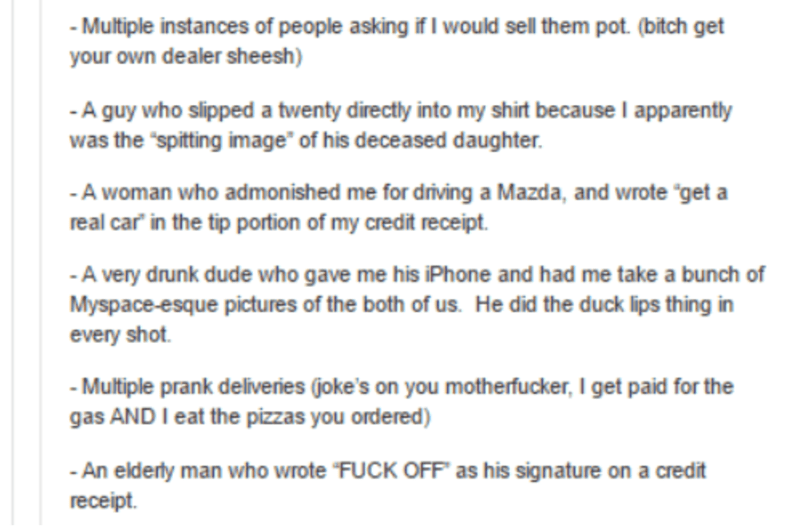 Then there are deliveries where people refuse to pay.

Why is the woman so concerned about the gender of someone who is delivering her pizza? Talk about nosy. 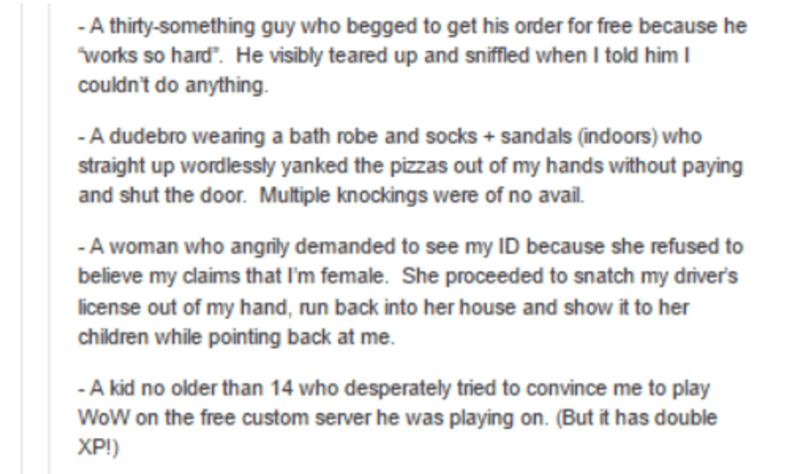 This list just keeps getting wilder and wilder. We are aware that there are a lot of lunatics in this world but we didn’t know the list would be this long. This is just bizarre but really hilarious to read. Scroll down below for the rest of the list:

Well, she pretty much got paid two bucks for every minute she got yelled at. 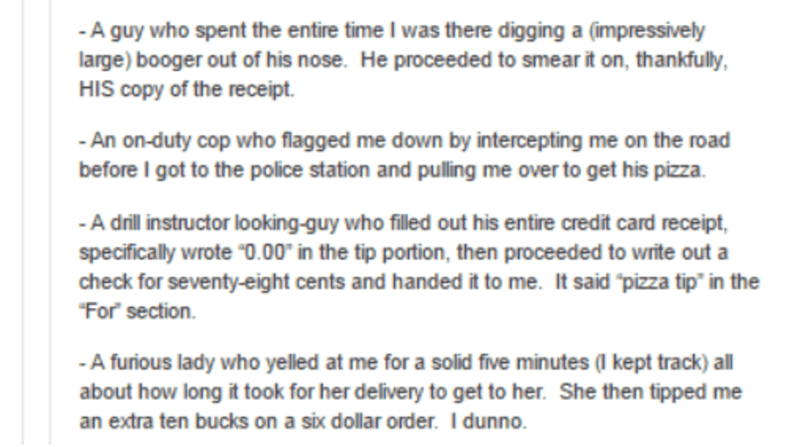 And then obviously, you have your naked people. That is obligatory.

The Pokemon theme song guys are wholesome as heck. 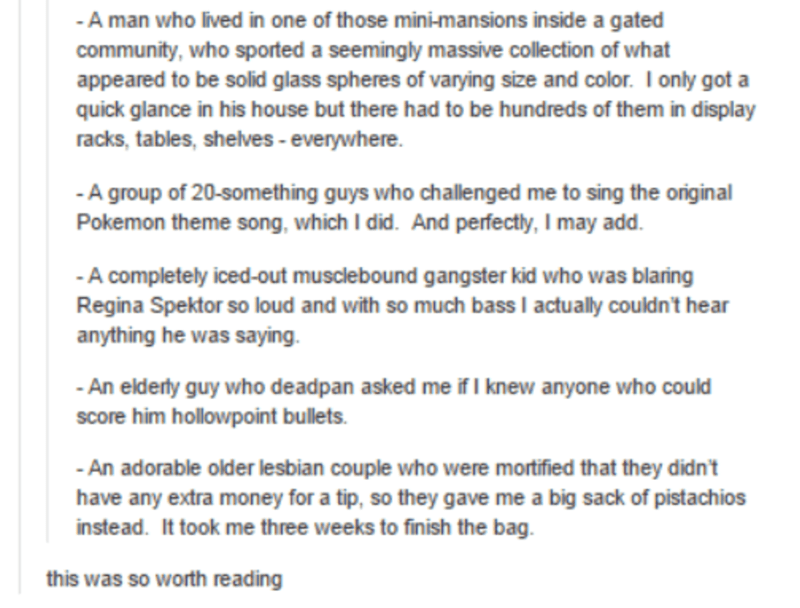