Asking for a gift is never appropriate.

Unless you are a child asking your parents on your birthday. And even then asking for a gift can be quite embarrassing. Maybe I am the only one who feels this way because there are all sorts of stories where people force others to get them expensive gifts and when they don’t get what they want, they obviously throw a fit. I suppose that is just how entitled people operate. And being pregnant certainly doesn’t exempt you from this.

This all started when a pregnant employee denounced her pregnancy and obviously every one of her co-workers was happy for her. However, she soon demanded a gift from the new employee which is straight-up weird if you ask me. Why would someone get you a gift when they barely even know you? It isn’t being cold, it is called being sensible.

I have mixed personal and professional life before, it did not end well. 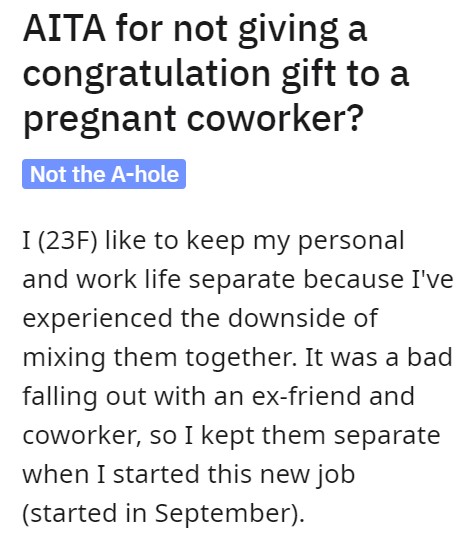 I can understand everyone feeling at ease on video chat. 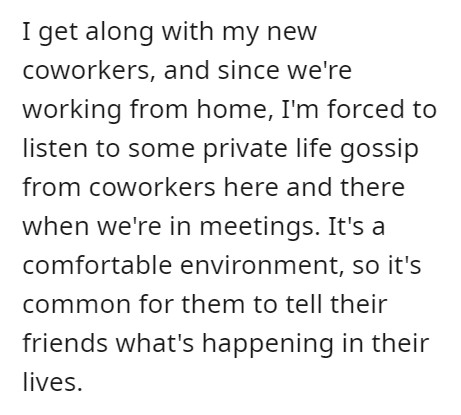 That makes sense since she doesn’t even know the woman. 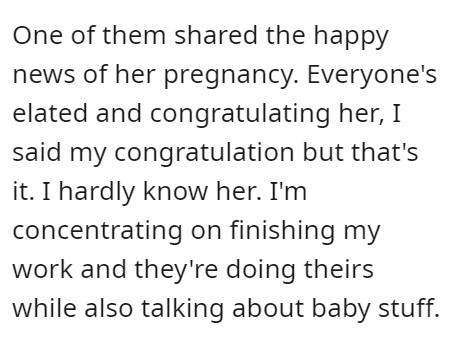 Birthdays seem fine but all of the other celebrations? Seems like overkill to me. 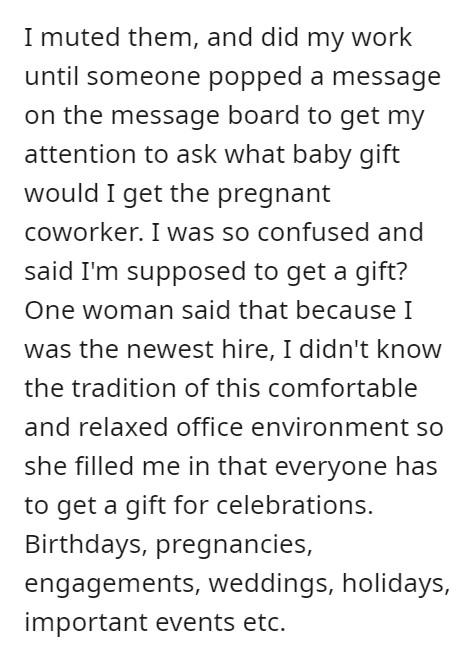 That is more than I would offer to a stranger. 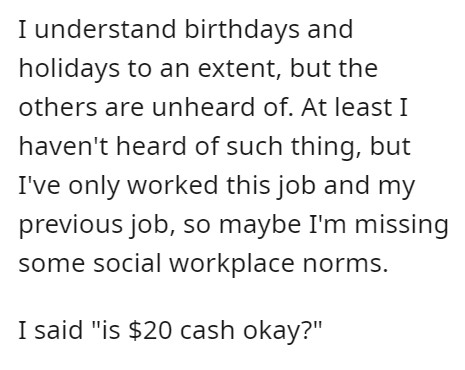 You are telling me the pregnant woman herself is asking for gifts? 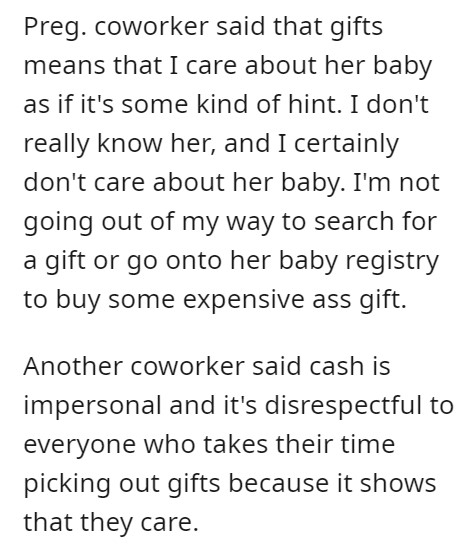 NTA. You are under no obligation to offer your own hard-earned money to people, especially people you don’t know that well.

It’s tacky enough for them to have asked you, but continuing to push for it was very inappropriate. Any toxicity was coming from them.

And this is a bad practice in general. The pushy coworkers don’t know the financial situation of the people they’re demanding money from. And frankly, it’s none of their business. Any gifts should be voluntary, not coerced. –MrShaunce

Then she takes it to a whole new level by mentioning HR. 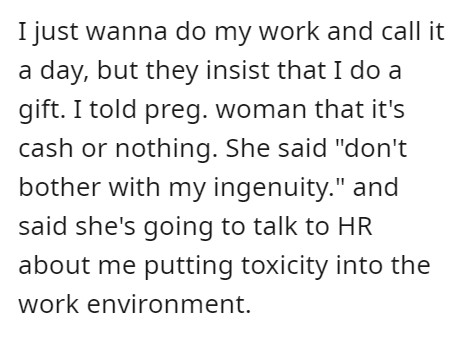 I would not be able to work in an environment such as this. 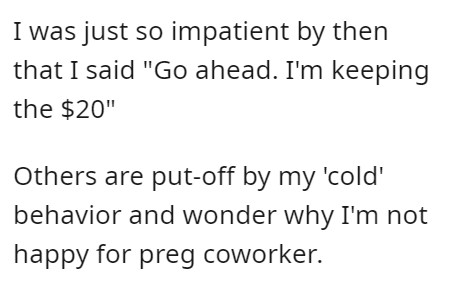 Going to HR before she has a chance might be the best recourse in this instance. 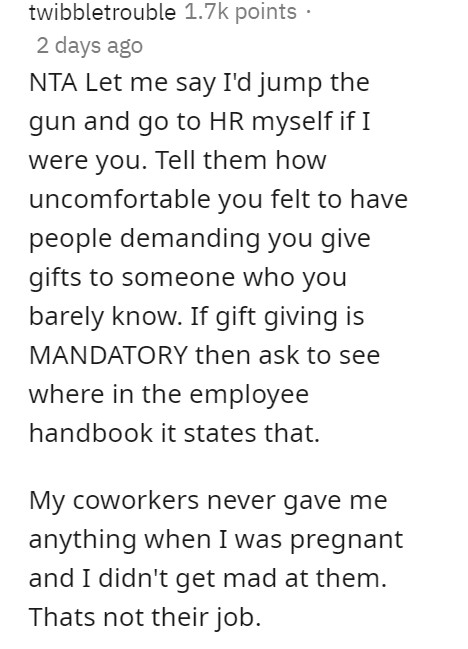 Exactly! Nobody is entitled to a gift. 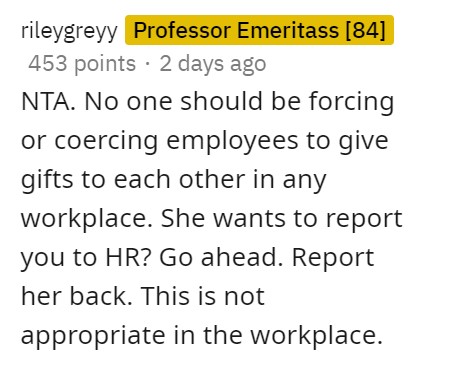 No company should ever promote this sort of behavior. 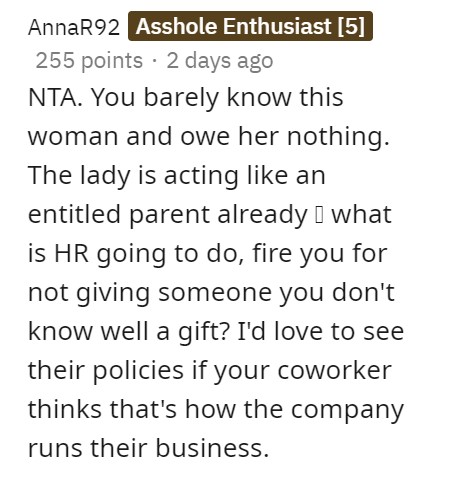 The most my workplace did was send out an email stating that if anyone wanted to contribute to a gift come see this person. And that was the end of it.

You’re being ambushed by a group of women with nothing better to do than talk about each other and their boring lives. Wait till the baby talk starts. It’ll never end.

They will stand in groups outside your cubicle and talk for hours about the new baby. –throwawayhelp

You work at your job, it really is as simple as that. 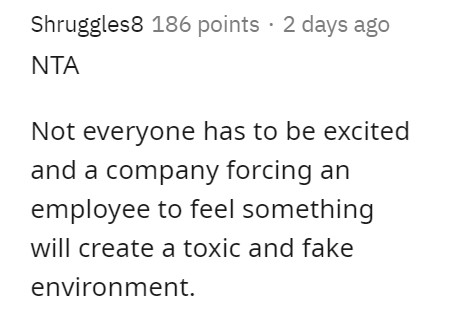 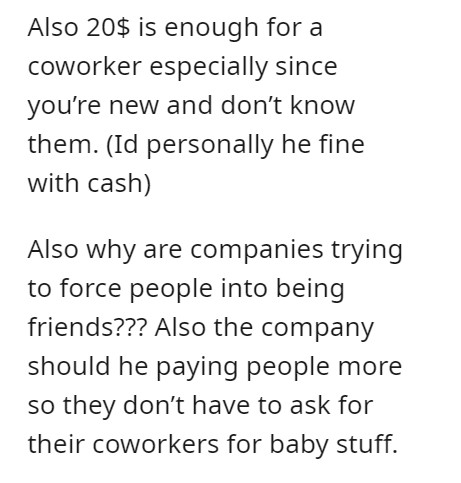