After a “seasoned” Resident Nurse joined the team and managed to unite their youthful and inexperienced peers to take a stand, a dreadful and cruel Nurse Manager was finally brought down by their subordinates. The atmosphere at work was highly toxic, and the clouds were virtually asking to explode at any moment. It only needed one small nudge to bring the establishment crashing down.

The Resident Nurse (RN), u/IAmHerdingCatz, uploaded this thread to the r/ProRevenge forum, recounting their epic tale of revenge from days gone by. Since it was first posted, the thread titled “I’m A Team Builder!” has received 5k upvotes on the subreddit. Commenters acknowledged their pleasure with the story and praised the “punchline” for its impact. Below are screenshots from u/u/post IAmHerdingCatz’s as well as some significant reader reactions. Don’t forget to read till the end.

1. OP was asked in a job interview about her greatest achievement in her career which took her down the memory lane to a story 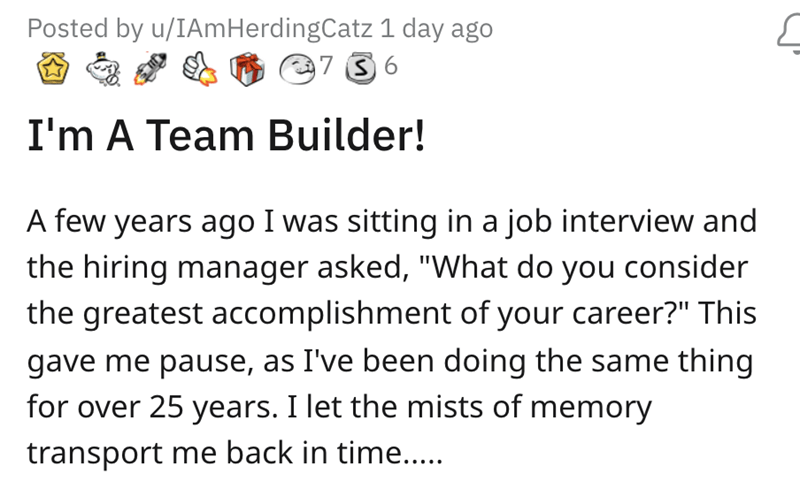 2. With three bosses working behind as a nurse, back then the department was the worst, with inexperienced workers 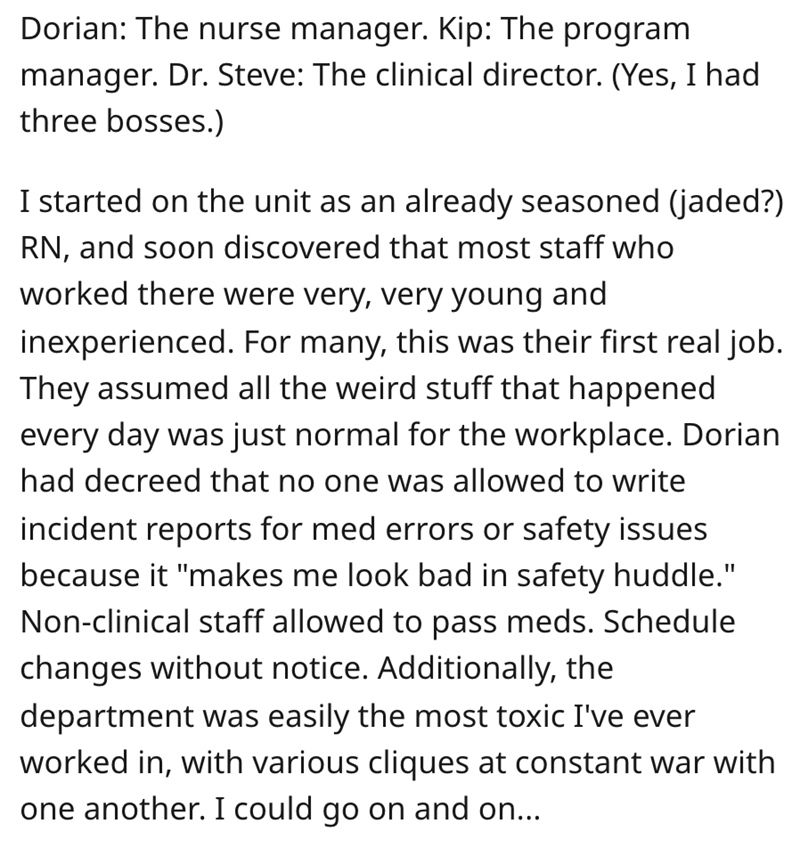 3. Dorian the nurse manager one day emailed OP to discuss an event, no details were given and she was instructed to not tell to anyone which she denied and did not go, several emails came but he kept on ignoring them 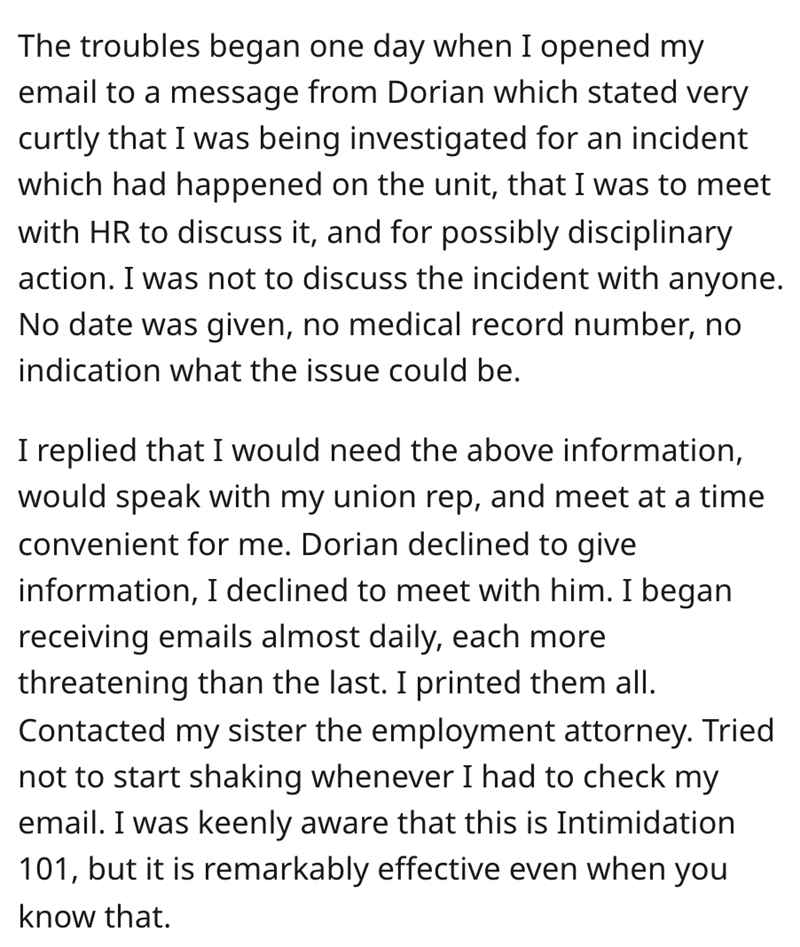 4. OP came to know that the same emails were received from Dorian to other 3 women too and they decided to not sit down, Dorian started threatening them in several ways 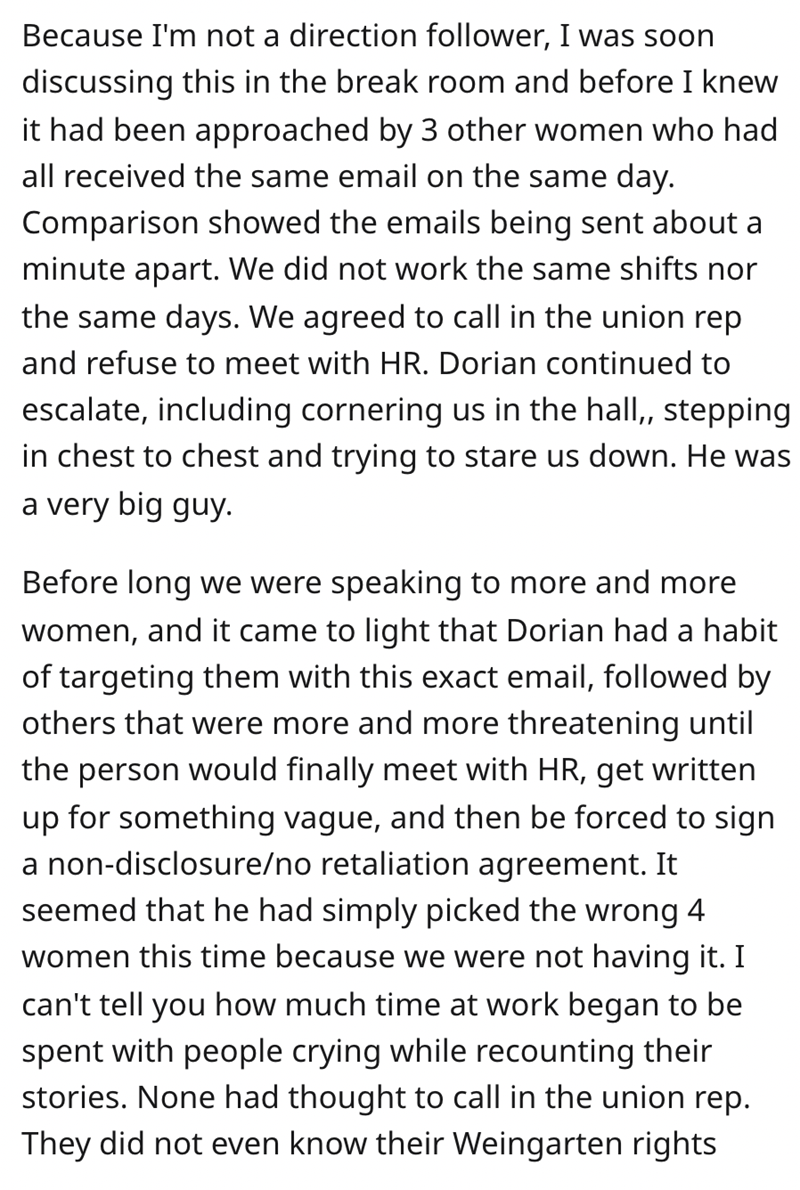 5. Several complaints came from all around the staff which was unexpected

6. Finally 2 women forwarded the complaints of sexual harassment. The case was brought to HR and Dorian had to run away 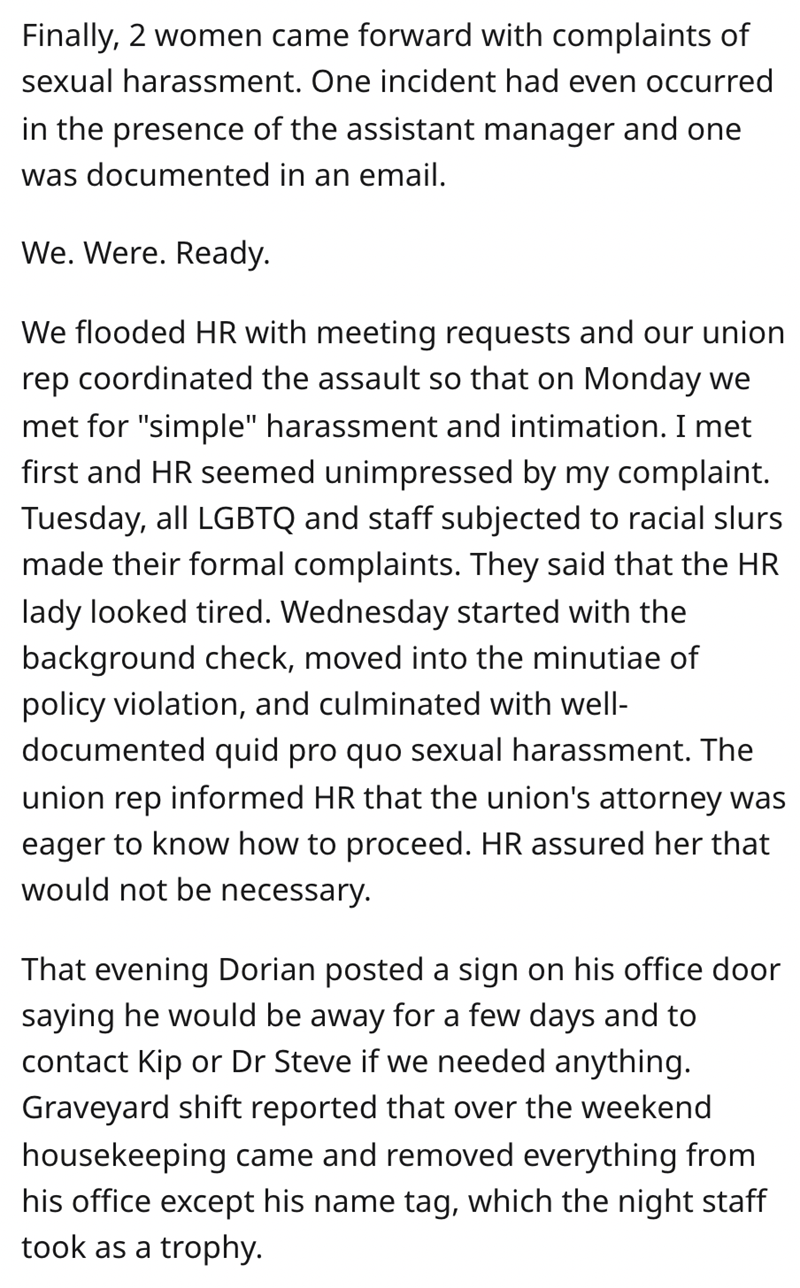 7. It was a huge success as every boss who had been alleged with harassment was fired 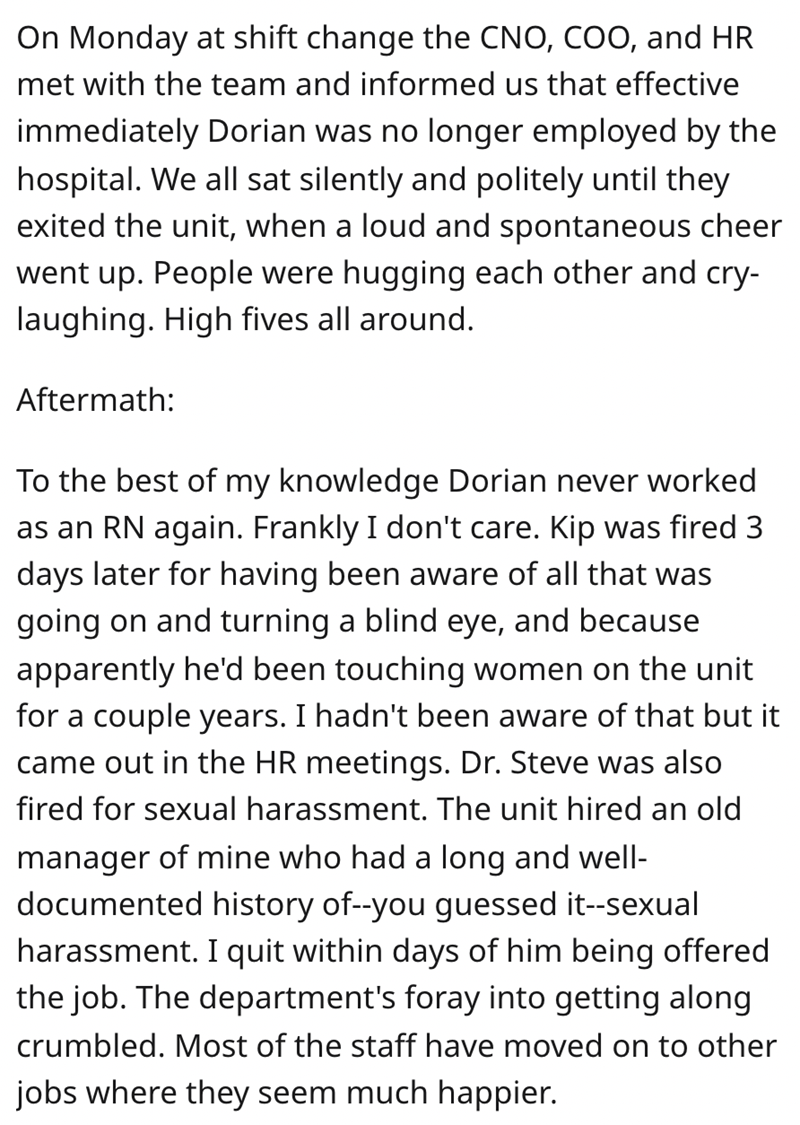 8. So this was the story OP was telling to the interviewers, bringing a team to achieve one common goal was her achievement as a woman, fighting against harassment.

9. Some institutions don’t understand a lesson 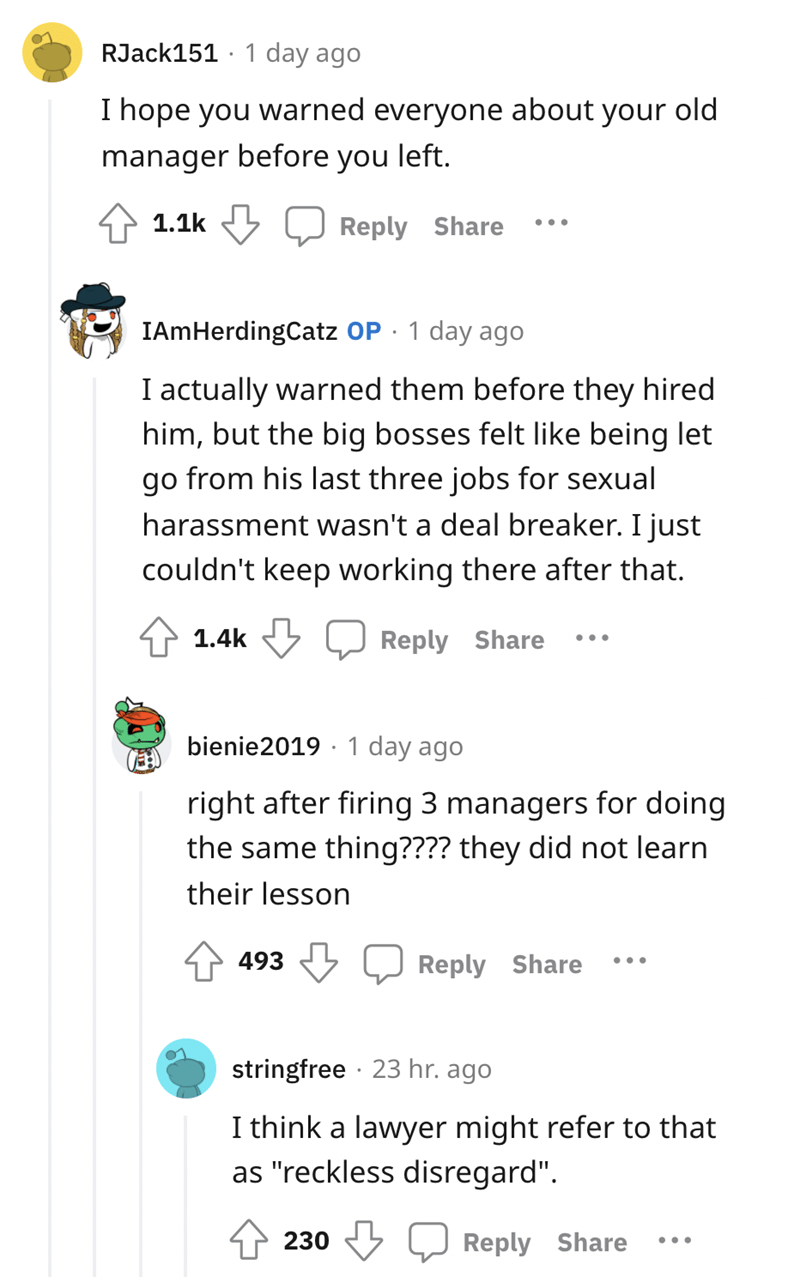 10. The story is indeed tragic but at least the goal was served

11. LMAO, these commenters are hilarious 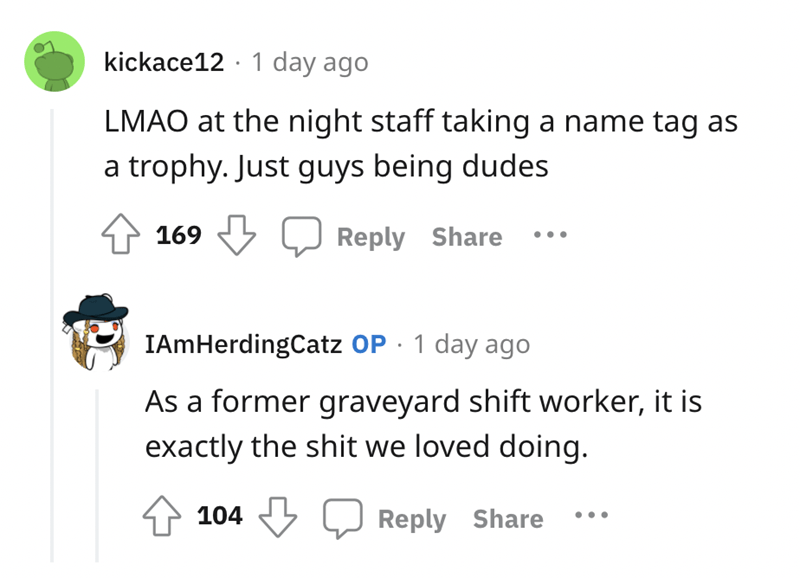 12. Team builder is the best title given to her

13. This one is right about this

14. Much respect for her, she really helped everyone by bringing everyone together and taking action, kuddos and cheers to this victory 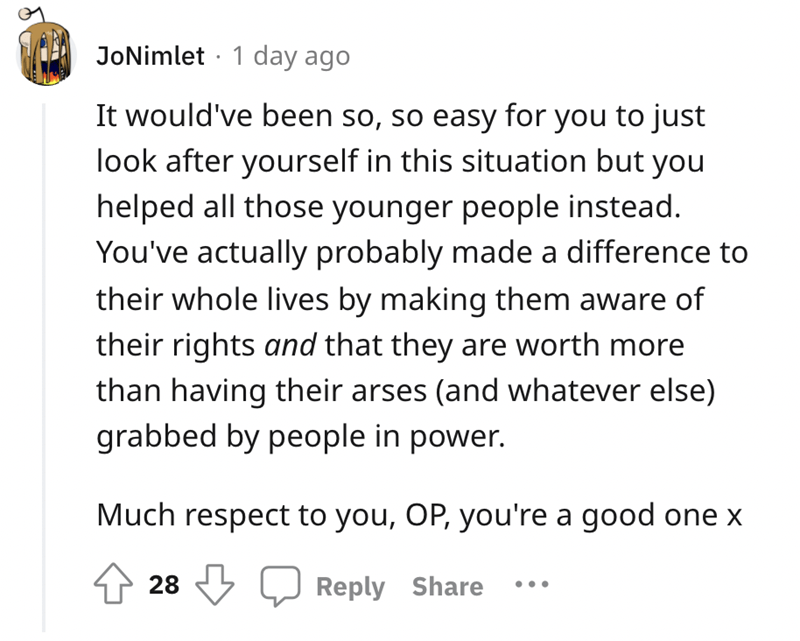 Via u/IAmHerdingCatz
Well, we should never ever settle for workplace harassment. low-life people who do such unforgivable actions must be punished, by all means, we should bring them down. If unfortunately, any such thing happened to you and you fight it and succeed, we would like to hear it in the comment section down below. Do not forget to share this inspiring story with your family and friends. If you want more interesting content coming your way, stay connected with defused for more!