There is a reason some people put their kids up for adoption.

Not everyone wants a child or is able to care for the kid at the time they are pregnant. And even if you say ‘They shouldn’t have got pregnant in the first place.’ Sometimes it is an accident that can have dire consequences later on. However, we can’t fault the biological parent to not want a relationship with the child later on. I understand it can break a person to hear that the person who gave birth to them essentially discarded them, but it is better to accept the truth than have false hope.

Of course not every person is like that and there are different stories. However, this instance is a bit different. You see two people who were in a relationship ended up getting pregnant. The woman was keen on having a baby, but the guy was not. So they decided that he would pay child support but not want a relationship with the kid. It was all settled, and they essentially went their separate ways. But things went a bit haywire when the kid grew up and started asking questions about his father. Understandably he was curious and wanted to know him.

We have a bit of background on what happened fifteen years ago. 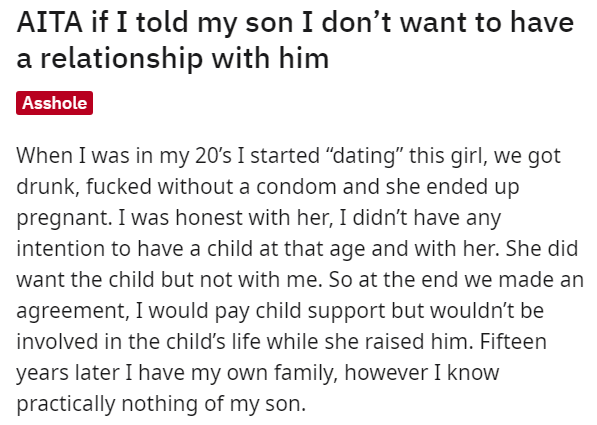 Unsurprisingly enough the kid was curious and wanted to meet his biological father.

However, that request was shot down which left the kid feeling unwanted. 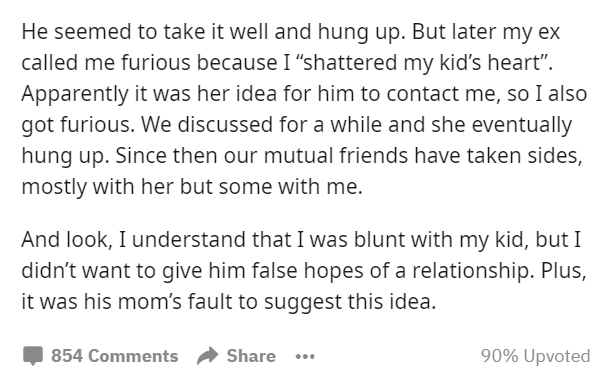 It is a bit weird that he hadn’t told his family that he had a kid with another woman. 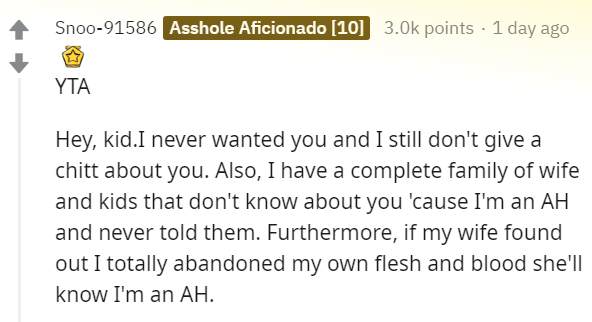 It might hurt him right now, but he will understand one day.

His mother should have never let the kid call you without talking to you first.

She knew what she was getting into when they decided he would only pay child support.

For such a big thing, the story is surprisingly concise and must have a lot of details left out. 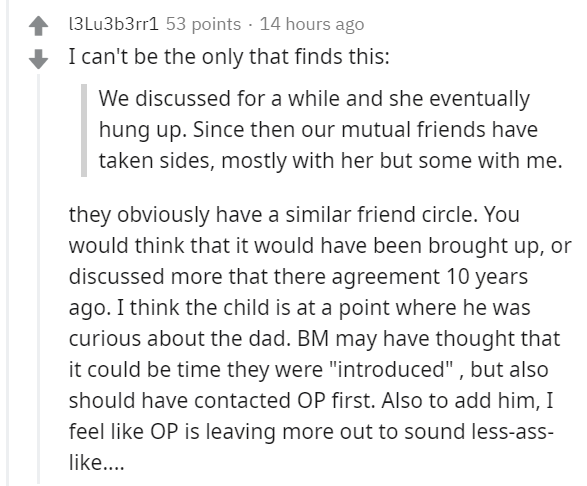 The guy didn’t deal with his kid like a proper human being either. 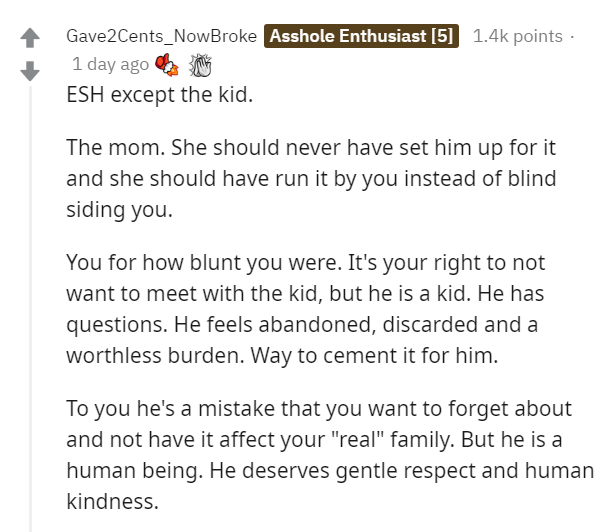 He could have met with him and explained all the reasoning behind his decision. 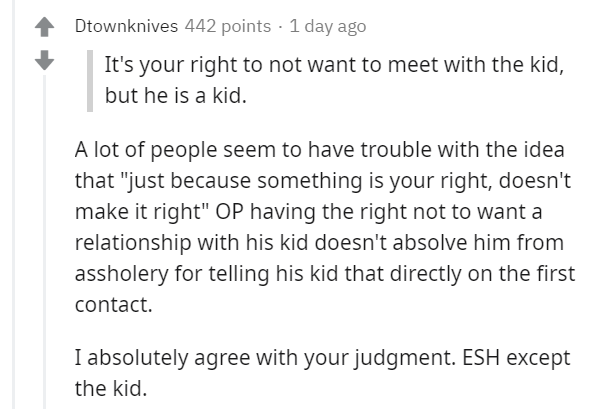 NTA. His mom knew full well you didn’t want a relationship with him, and she should never have set him up to cold call you like that. In an ideal world I’d say you’re TA as well for being so blunt, but honestly, I’m not sure how it would have been possible to respond better to a surprise phone call out of the blue.

If you’re feeling badly about the way you rejected him, you might try writing him a letter or an email to explain yourself in words you can choose more carefully. Say you and his mom had an agreement from the beginning that you wouldn’t be involved in his life, and your feelings haven’t changed, and you’re still not interested in having a relationship, but you’re glad he’s happy or something. –fizzbangwhiz

The kid deserves some sort of closure. 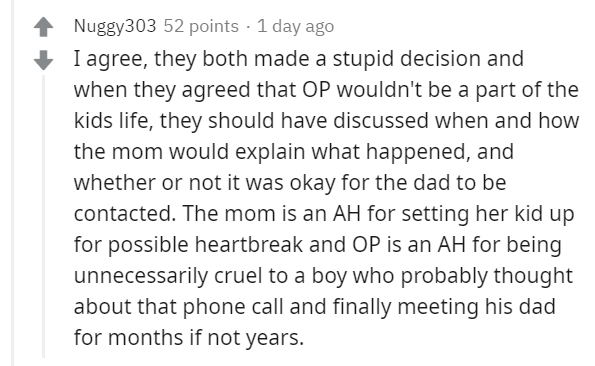 Of course, it is his right to not want a relationship with his son, but he is still in the wrong here. 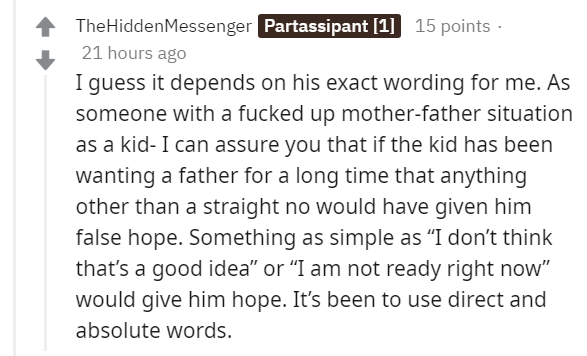 And so is the mother. But the 15-year-old is the one who gets the brunt of it. 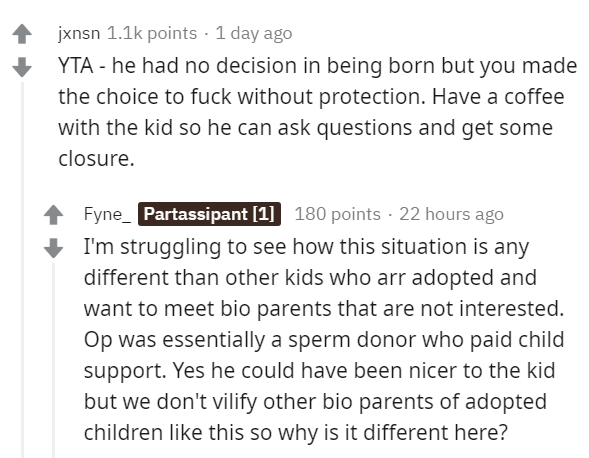 Everyone is saying that it’s ops fault for having unprotected s*x, and as a WOMAN I say that making a baby needs two people. SHE made the choice not to abort or adopt, op didn’t have a say in it. And if SHE can choose (I’m pro-choice) I think that op can choose too. He’s already paying child support. It’s unfair that everyone is blaming him having a kid and not being a ‘father’ when he made it CLEAR to the ex that he didn’t want a kid.

She is a HUGE ah for letting her kid contact him when he clearly didn’t want that. –shynerdnextdoo

Who do you think is in the wrong here? The mother for telling her son to call his father? Or the father for not dealing with the situation better? Comment down below and let us know.