Doing all the chores is never fun.

I mean I have had to do all the household chores many times, and it always leaves me knackered. I understand taking care of things after yourself. However, it is not required that you basically act like a maid for the whole house. That is why many parents assign equal chores to each one of their kid. Although it seems this family is perfectly fine with making this girl do all the work. And then they even have the audacity to get angry when she refuses.

That is why it is understandable that she’d want to teach them the lesson. Or more so teach a lesson to her 18-year-old brother who acts like a bratty child rather than a full-grown adult. I have never heard of a person basically throwing a tantrum because they didn’t get brownies without nuts in them. I mean if I like to eat something in particular, I would do it myself and I feel like that is what most people do as well.

Not this guy apparently. You can take a look at what the sister did when she had enough of his bratty behaviour.

Not only is your brother acting like an 8-year-old but your parents are actually siding with him. 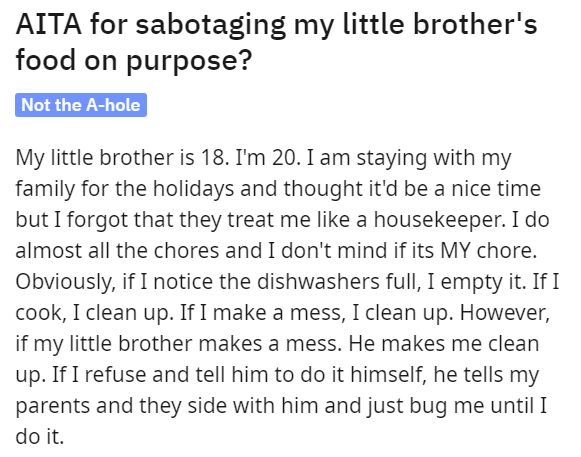 Honestly, no self-respecting adult would ever say that.

I mean if he wants it done his way, he should stop being lazy and do it himself. 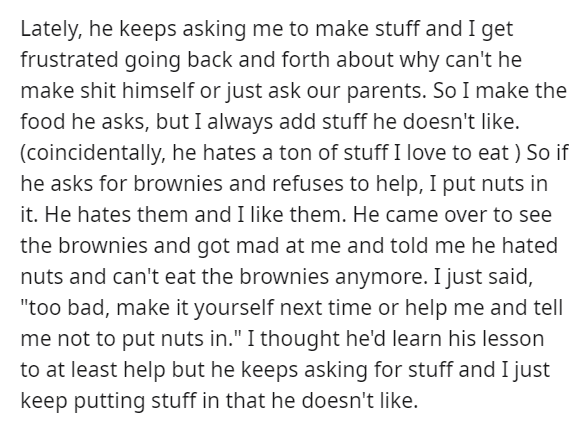 This kid is never going to learn to be independent by the looks of it. 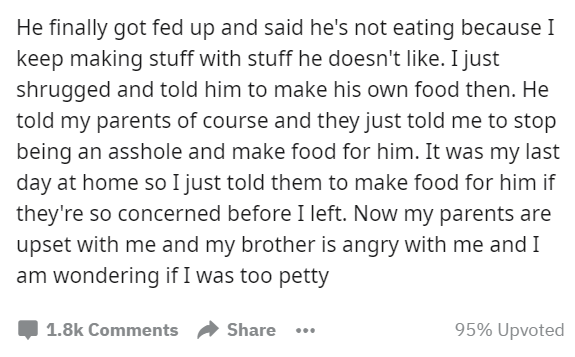 I thought he was a kid as well. Apparently not. 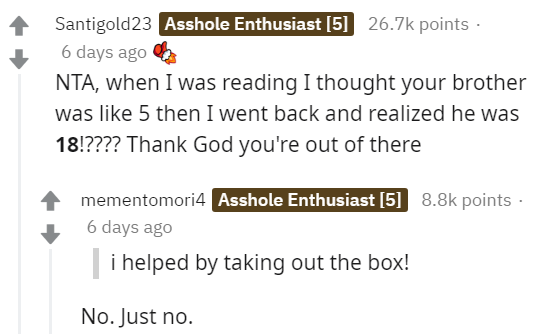 I don’t want to presume anything but this seems like a gender thing.

I don’t think that is unfortunate at all. 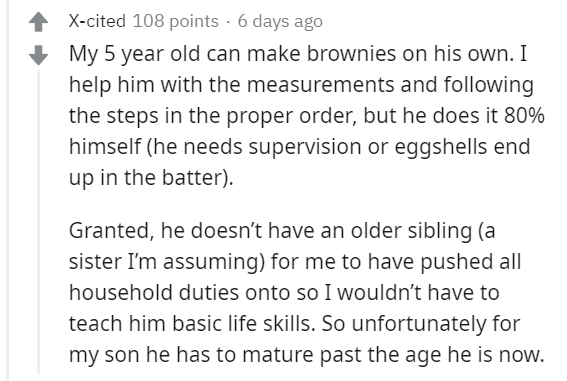 Not nearly as bad as your story but my little brother is 10 years younger than me and I cannot understand how he was raised. He is now getting his first nearly full time job, which is good I guess… But when I was his age I had been living on my own for a few years and was already pregnant with my first kid. He’s literally one of those “living in his parents basement” guys. I don’t understand what happened between when I was being raised to him. Something about him being babied and my parents being tired and complacent I guess? It’s a weird dynamic. –DentRandomDent

This family probably thinks women should be the one in the kitchen. 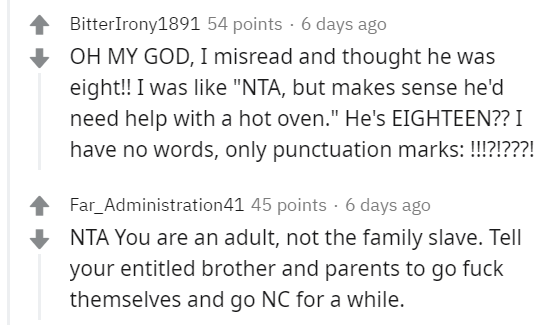 Cooking might not be everyone’s cup of tea, but you have to learn the basics to survive. 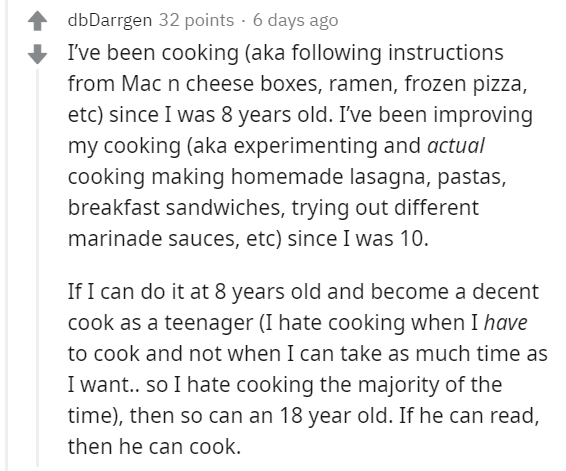 Making brownies with box mix is not even that hard. 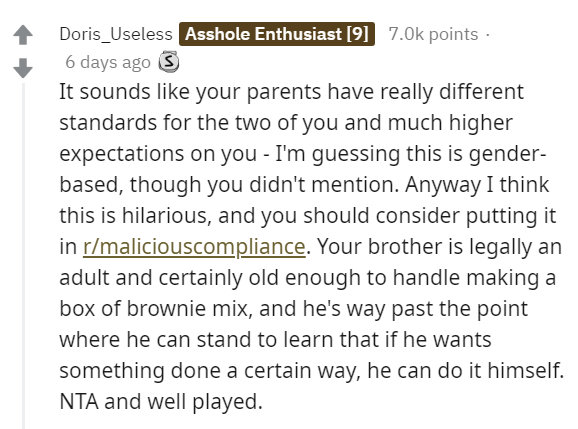 Her parents clearly do not respect her. 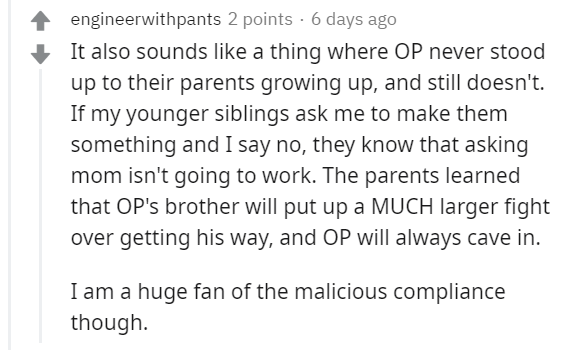 You need to have a serious talk with your parents about this situation… The inequity here is absolutely ridiculous.

Your brother is an adult, and you are not a servant. Frankly, I’d start looking for other places to spend your time during what I assume are breaks. NTA –idiggory

Do they not understand that coddling their son is only going to hurt him in the long run? 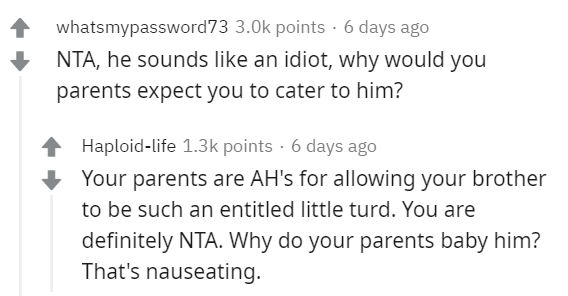 She had me there with the title as well, but she is obviously not in the wrong here. 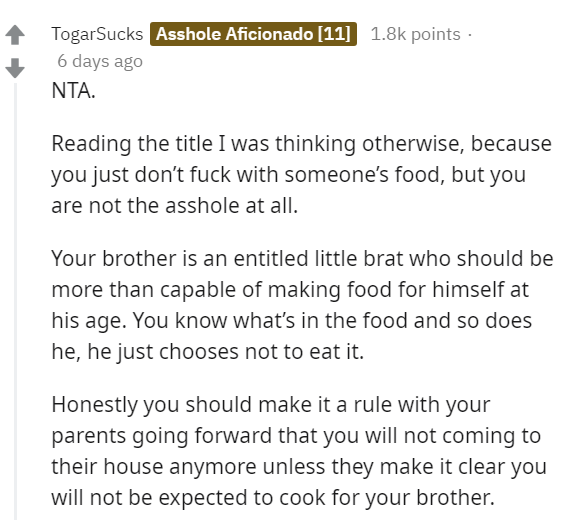 At the end of the day, she doesn’t live there, so she doesn’t have to listen to this nonsense. 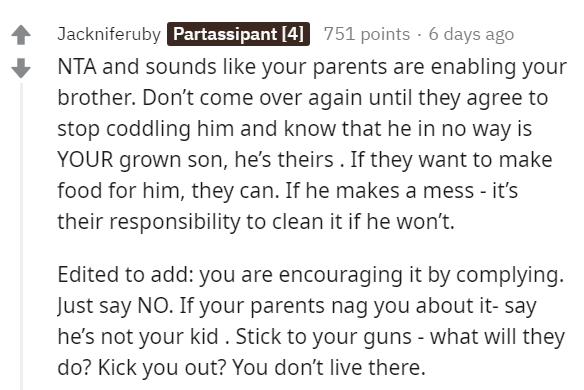 “Mom, Dad, I didn’t come home for the holidays to be my brother’s personal maid. Nor did I return home to be your housekeeper. Brother needs to step up and I’m NOT here to play unpaid servant. If this is a problem for you, I’m happy to return to my home and have Zoom holidays going forward.”

What do you think is the reason her parents do this to her? Comment down below and let us know.