Do artists deserve to get paid?

The simple answer is, Of course they do! After all, how else are they supposed to make a living off their craft? However, it seems many people don’t agree with this fact. Would you ever ask a doctor to treat you for free because you are a single parent? Or an engineer to fix your computer for free because you don’t have the money? No normal person would. So why is it okay to ask an artist to donate their work to you without a compensation?

The simple fact is likes and followers don’t put food on the table. So to all the people who would like to pay artists with exposure, can they live off likes as well? It is just an endless cycle where the world thinks it is okay to treat creative people like dirt and steal their work without any problem. Well not anymore! Because artists are tired of this and have begun to value themselves and reply just as they have been treated by the ‘potential client’.

Scroll on below and take a look at the comebacks these people served to the cheap entitled people.

#1 At first they were big fans but then apparently hated her work. Makes sense.

It’s more than I’d pay, but if you don’t like a price you go “oh, pricer then I thought it’d be. Maybe another time” and then bounce. You don’t sit there and berate a seller because your idea of what something is worth is less than the sellers. There are other buyers. They are not obligated to meet your price point. –ranluka

#2 I know some companies give away free things for your birthday. 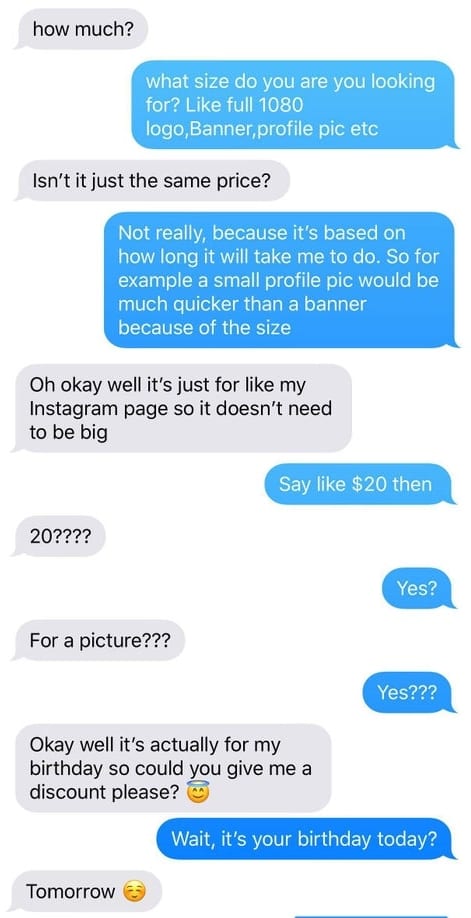 However, having a birthday doesn’t make you entitled to discounts.

Isnt it ironic that these people are actively looking for talent to be paid by exposure, when if exposure actually worked they wouldn’t have to look? They would simply know from all the talent they have seen and remembered from other people “exposing” the talent. –sndwsn

#4 I understand drawing or painting for fun but who makes logos for fun?

#5 Whoever messaged this clearly doesn’t understand how trade and services works.

#6 They are a scammer because they won’t work for free? I think I lost a few IQ points there.

I offered to do something more simple for free only to be threatened with reporting… Furthermore, I don’t mind doing free chibi Art at all and have even posted that I’m doing free CHIBI style but yet still get people asking for full body detailed work for free.

#7 What does being a single mom have anything to do with covering up the tattoo you regret having?

#8 So what you are saying is I can’t say I was the one who wrote Hello because Adele won’t reply to me?

#9 Ignoring the cheap person in this conversation. How can anyone hate the word moist?

People who share every aspect of their lives on social media. Why else would these people want a professional photographer to capture their little kid’s party? I unfortunately know several people like this in my extended family. They rented-out a popular restaurant for their daughter’s 3rd birthday party…3rd! A child that young isn’t going to remember anything from that party or any of her parents’ ritzy friends who were invited to get drunk at the bar with them. –robo-dragon

#10 That is still better than what I can draw and that makes me sad.

What do you think about these comebacks? Do you think they were rude or did the ‘clients’ deserve it? Let us know in the comments below.