Family shouldn’t intervene in some matters.

Especially in the matter of one’s marriage. Now, I am not saying a family can’t express concern when they think the person you are marrying might not be the right one for you. But even if they think you made the ‘wrong’ choice, they still have to be supportive. Because that is what families do. However, in reality, more often than not, most families love to cause drama on a special event such as a wedding.

This family didn’t approve of who their son was marrying. Rather than letting their concern show and then moving on, the parents decided to disown him. Not only that but they called everyone else in the family and told them things that probably weren’t true so they would not go either. Why parents would want to ruin their child’s special day, I have no idea. But that is exactly what they did.

These two had been happy for a long time and decided to get married.

Even after the family realized, they could do nothing to change their son’s mind.

They continued to send him things they hated about her which is a new low. 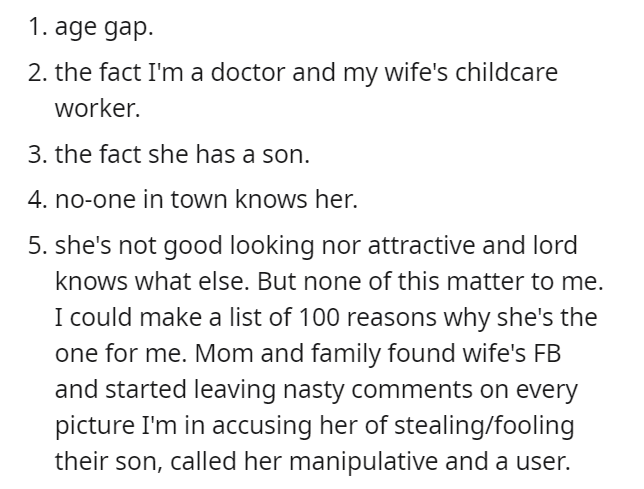 OP isn’t being quite honest about something. If his family really acted like this, his family would be total asshats. But maybe he’s exaggerating. He says met his wife when he was 25, probably in his 3rd or 4th year of medical school, with the age difference… I can see why a family would be concerned. So, like, what isn’t being said here. It seems like there’s more to the story here. –IShouldBeHikingNow

Rather than just leaving it at that, they took it a step further and tried their best to ruin the wedding.

One would think, this is where it will all end but that was sadly not true.

As even after all that, they showed up to the wedding uninvited. 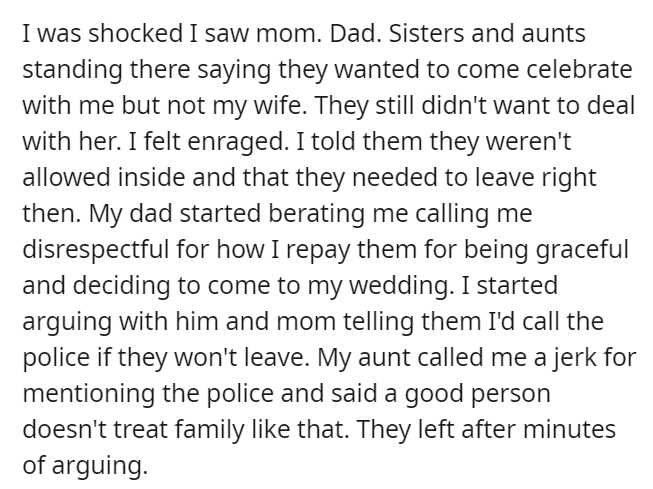 And most of his friends took the family’s side as well so now he is unsure if he did the right thing. 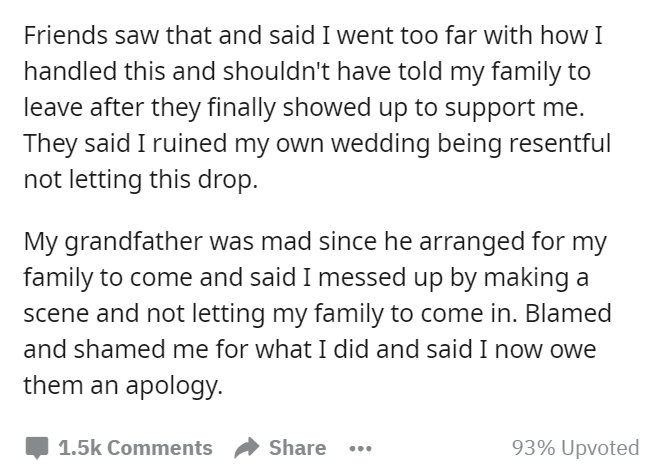 But Reddit was quick to tell him that what he did was absolutely justified. 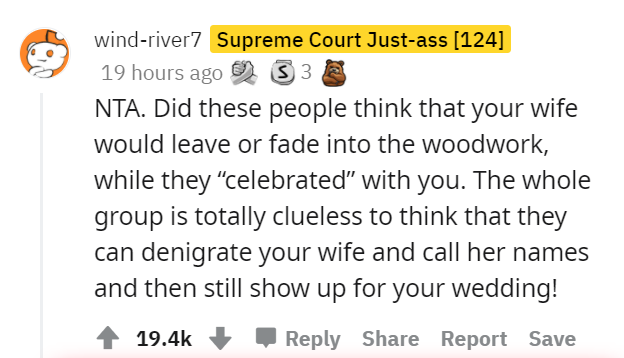 Most people agreed that they probably wanted to ruin the wedding even more. 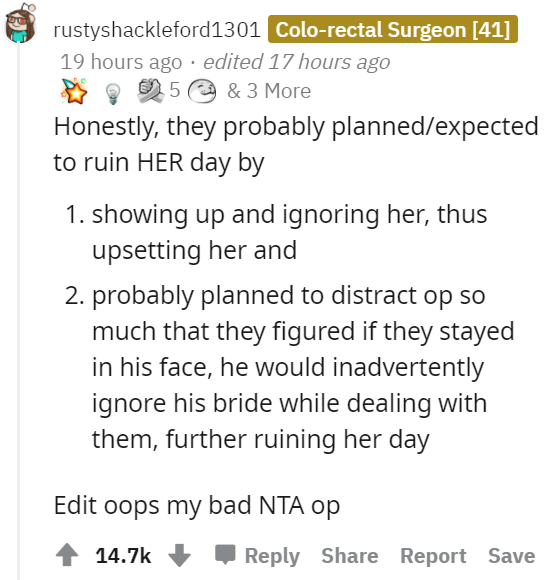 As they hadn’t acted like family before so now why? 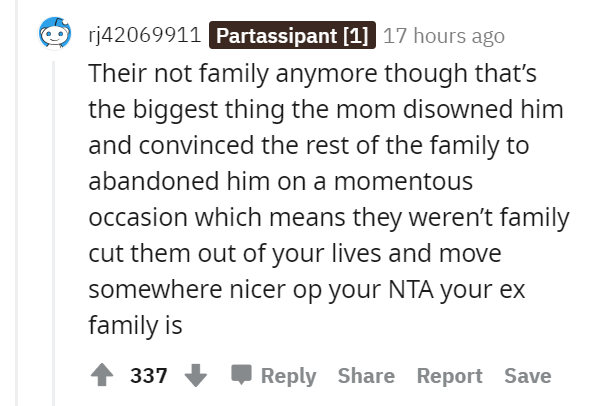 They basically wanted to show up to the wife on her special day and nothing else. 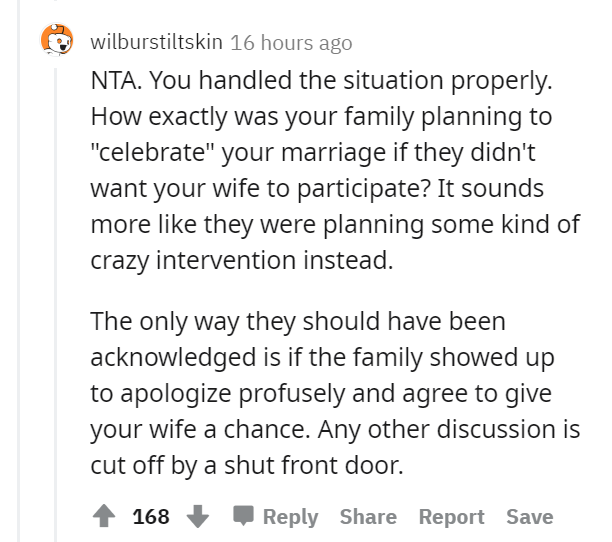 They will come running back after they realize what they have done but it will be too late by then. 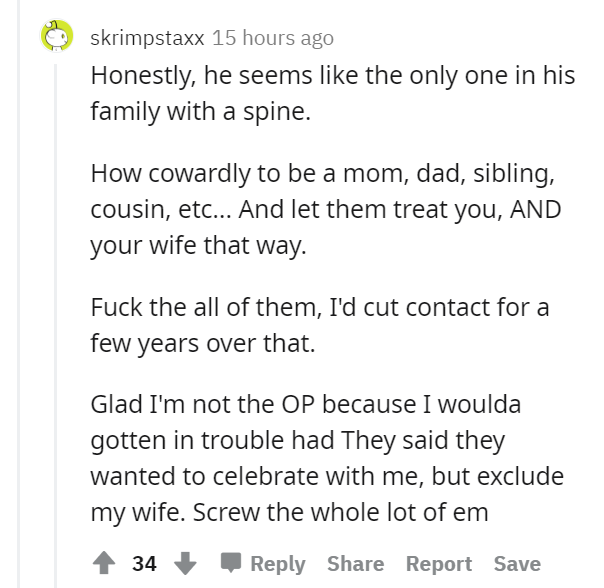 They clearly don’t know what self-reflection even means. 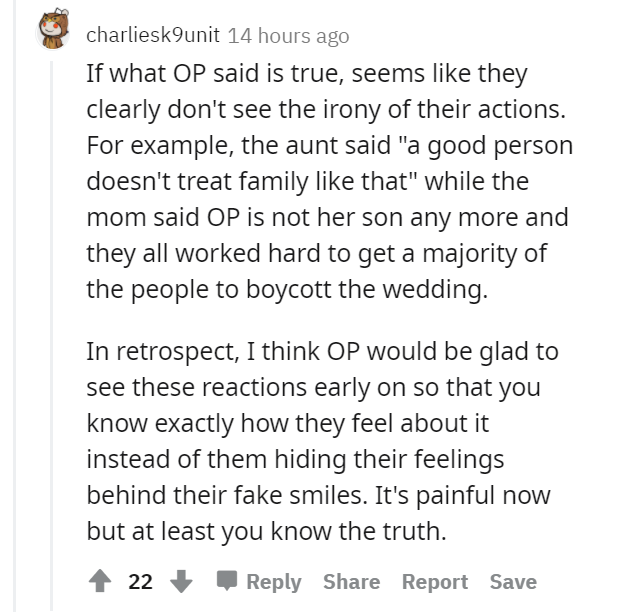 But you are a good person because you aren’t treating your family (wife, stepson) like that. You’re treating a horde of inconsiderate moist fungus-cakes like that. Don’t apologize to those fungus-cakes. They owe you the apology. More, if you’re feeling graceful, they owe your wife an apology. Kudos to your BIL for not just letting them in, like a lot of people might (“I didn’t want to cause a scene on your wedding day, bro,” sort of thing).

The fungus-cakes – from Gramps on down – are the jerks. Honorable mention goes to your “friends” who really should learn to keep their traps shut on what constitutes ruining your wedding. You, your wife, your stepson, your BIL – you all are NTA. –HanaBlueStorm

While I agree with most of this statement, calling the cops might have taken it too far. 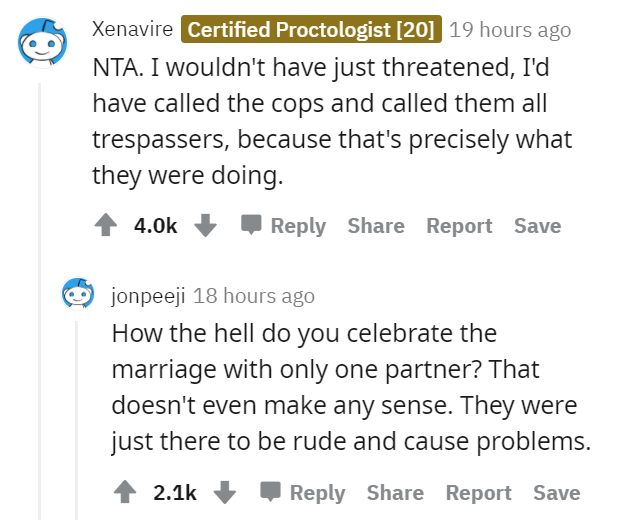 Hopefully, they get what is coming to them. 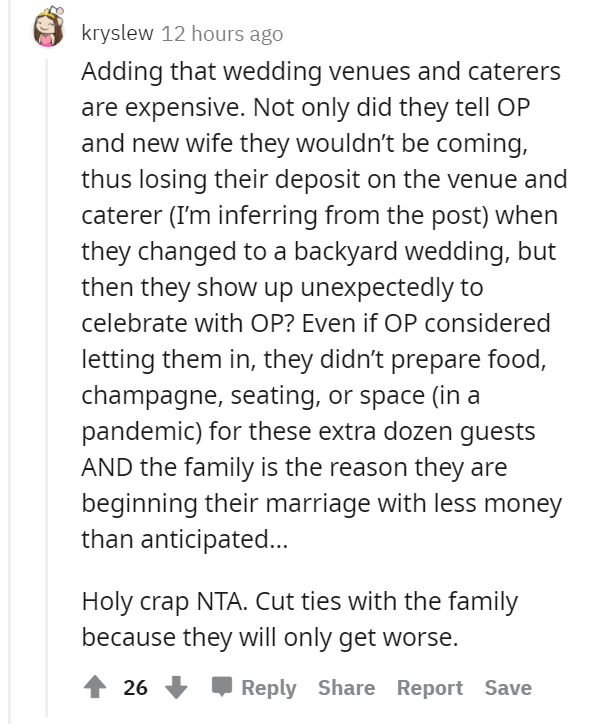 What are your thoughts on this family drama? Do you think he took it too far by not letting them celebrate his wedding with him? Comment down below and let us know.