Nobody is in fact. Even though we always put teachers in higher regard, that doesn’t mean they don’t make mistakes. However, in this particular story, most of the teachers are just plain to mean to one of their students. Rather than helping him get ahead in life, they put him down again and again until he had enough. Not only that he was only in 5th grade when this story happened.

While I am glad they got what they deserved in the end. It is still sad to see that teachers even behave this way and think it is okay to presume things about your students without any proof. Honestly, this story will make anyone who has dealt with toxic teachers feel a whole lot better. We all had that one teacher that was rude, arrogant, and that we all hated. And this is the story of how this guy got back at these types of teachers.

No idea why they thought he was lying but they made their mission to degrade him every chance they got. 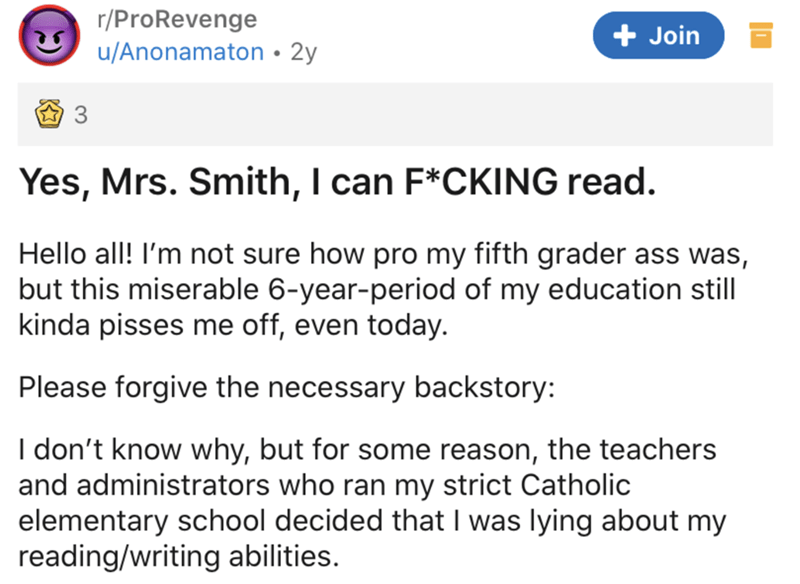 Is it really so hard to understand that he already read it? 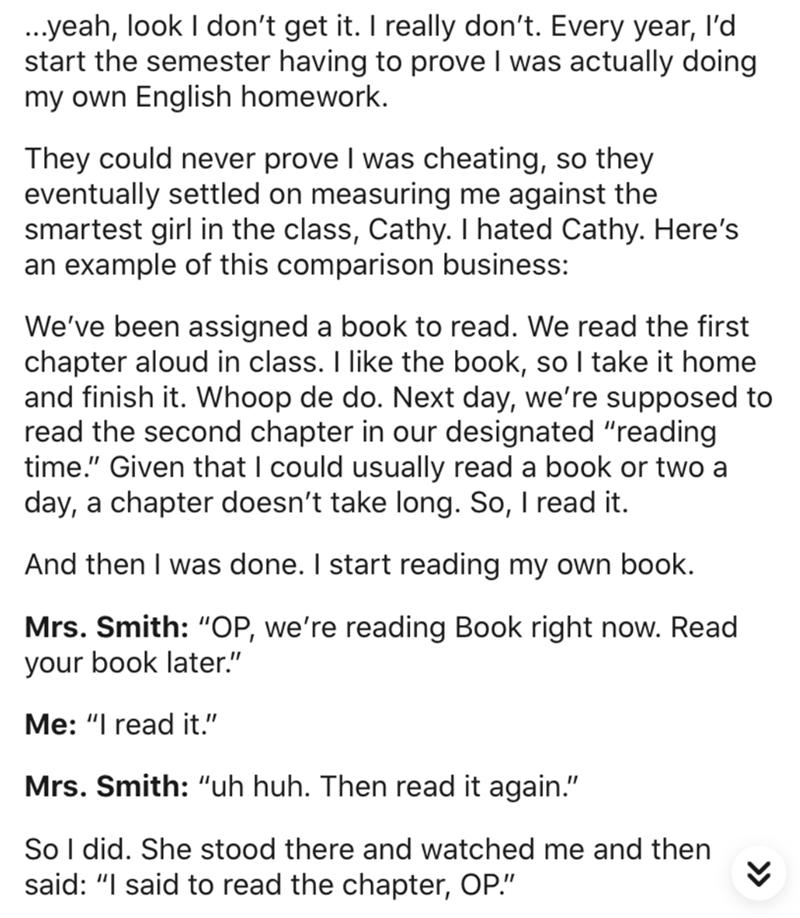 This story was f**king beautiful and nostalgic, my teachers also thought I was a cheater at times because I was exposed to a lot of higher grade materials by my siblings. –LeeKwanSoo

He had to go through this torture for years until one day he finally had enough and snapped. 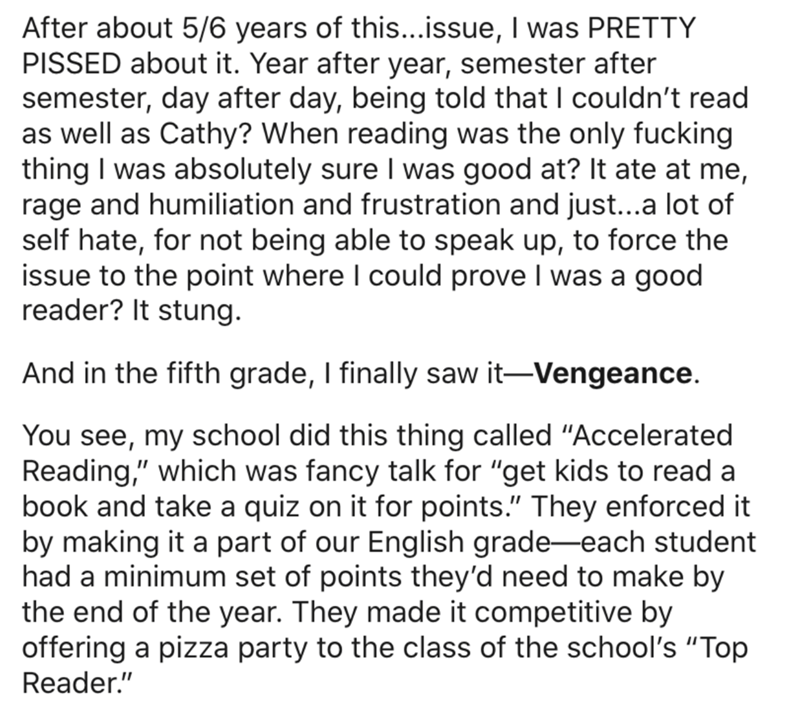 While he could have entered the competition before but he had his reasons.

And now was his time to shine and show his teachers the truth. 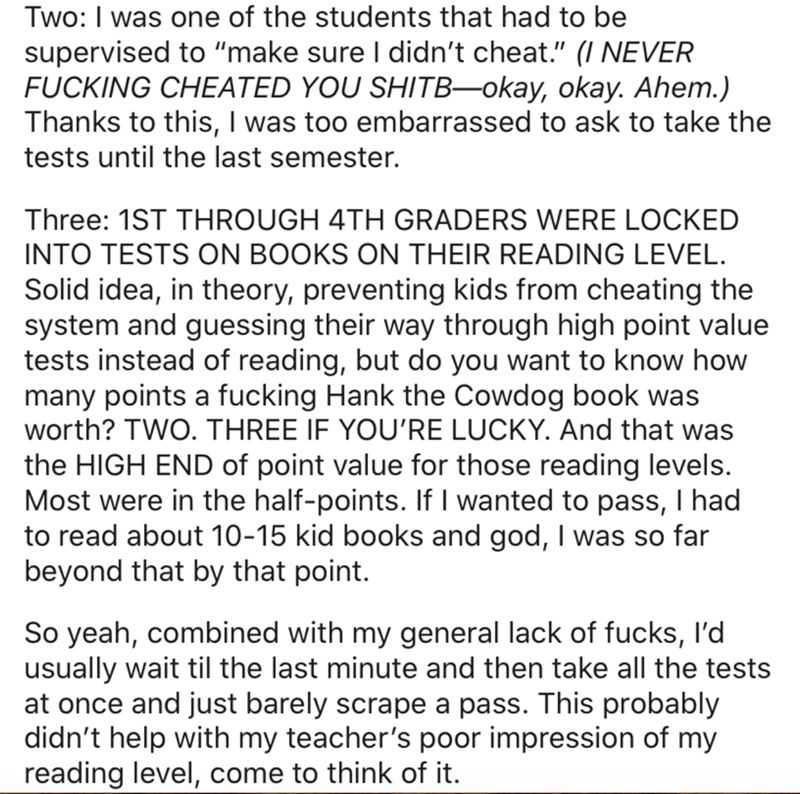 He planned for this with great detail so he could have his big moment. 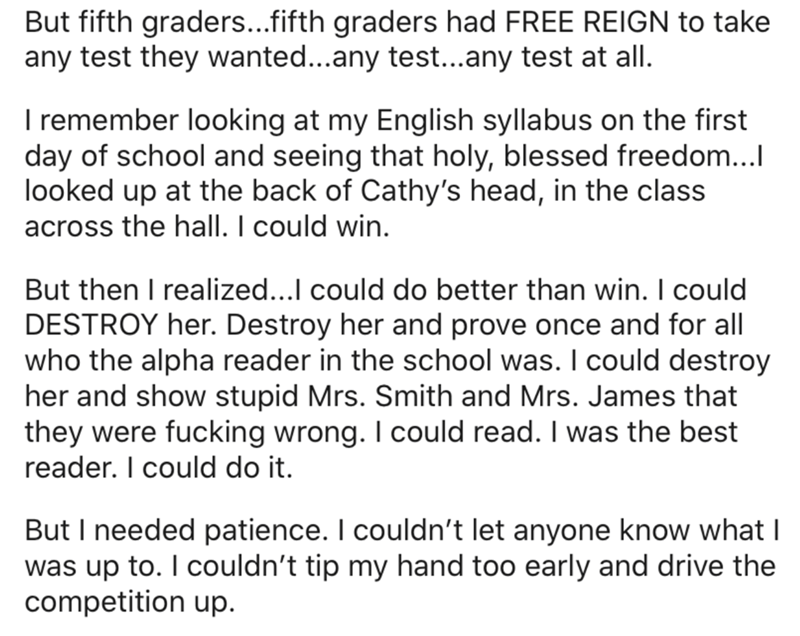 His plan was going perfectly. He knew what he had to do next. 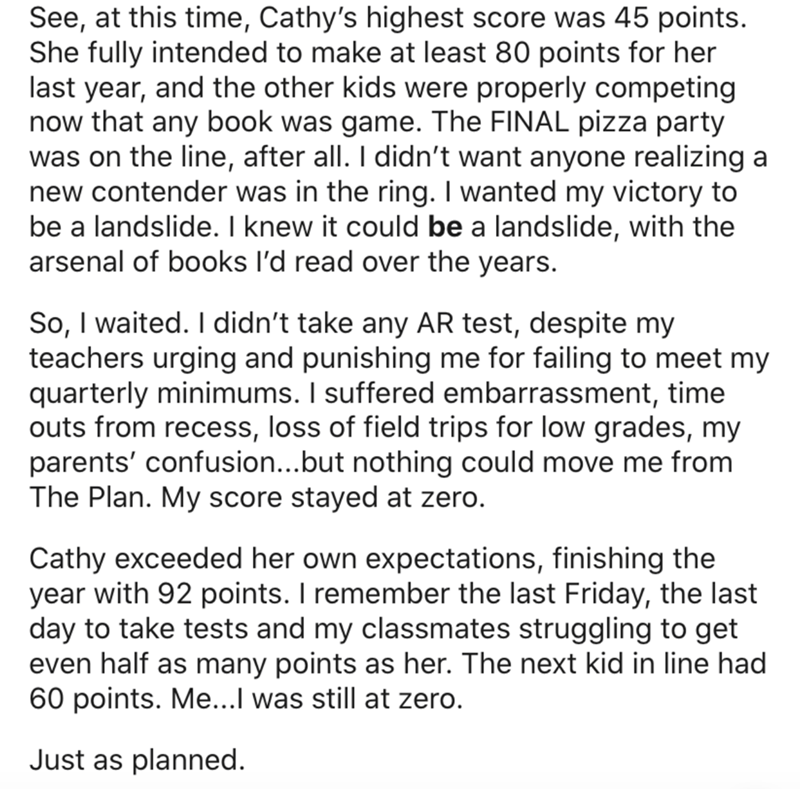 Whatever book he had read, he went on to test. 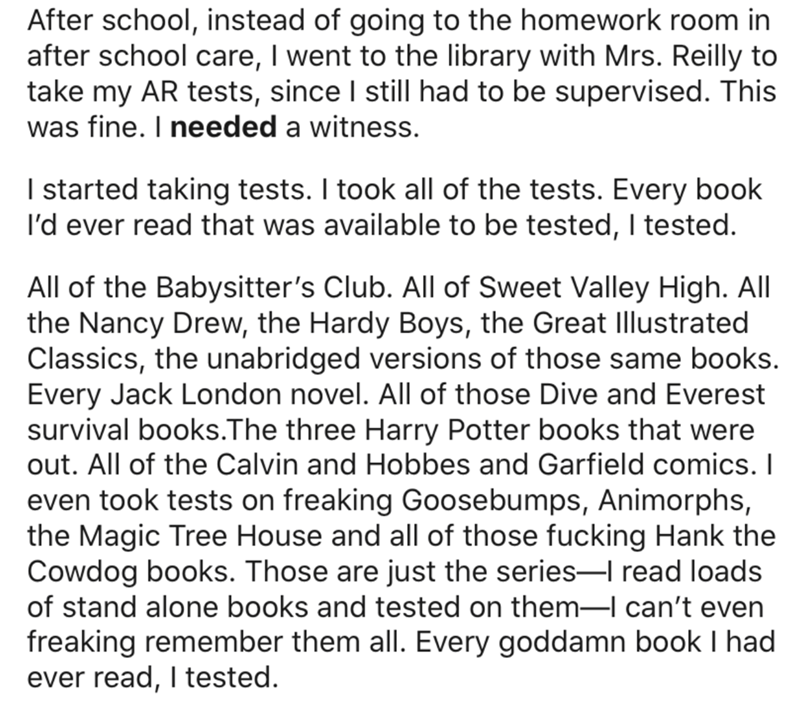 All of the bullyings had broken this kid and he wasn’t going to give up. 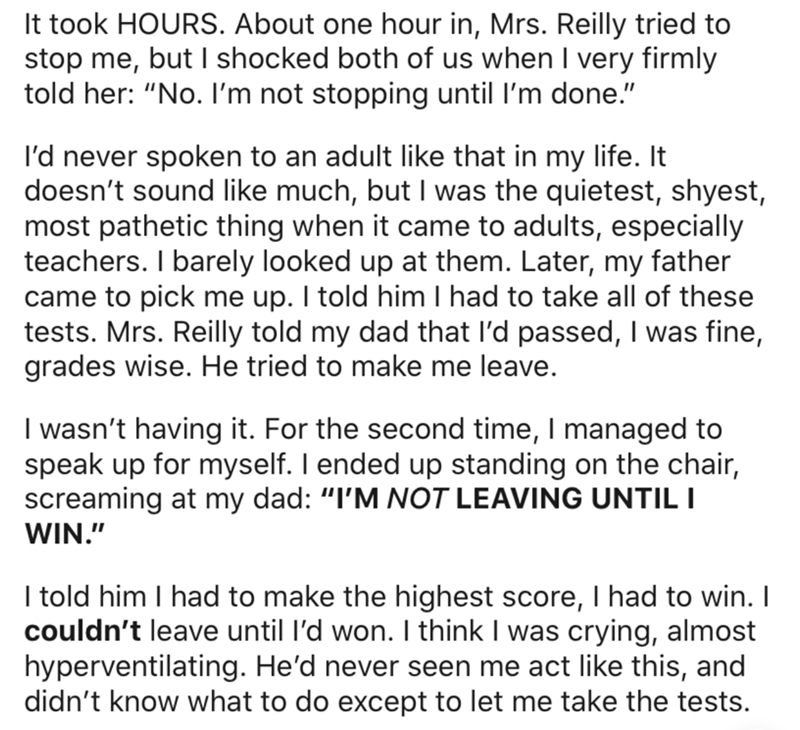 I’m in f**king tears reading this. Honestly, OP, I’m so f**king proud of your twerpy, fifth-grade ass. I remember those feelings of “Yes, I CAN do this, but you just don’t believe me. I need you to believe me.”

I just… You’re a hero. You’re a little, 9-year-old fucking hero of epic proportions. I’m glad you got your moment to shove it up those teachers’ asses. They did not deserve to have been teachers at all.

Also, all that reading did you well. You’re a phenomenal writer. –jdc53d

After the tests, he finally went home. 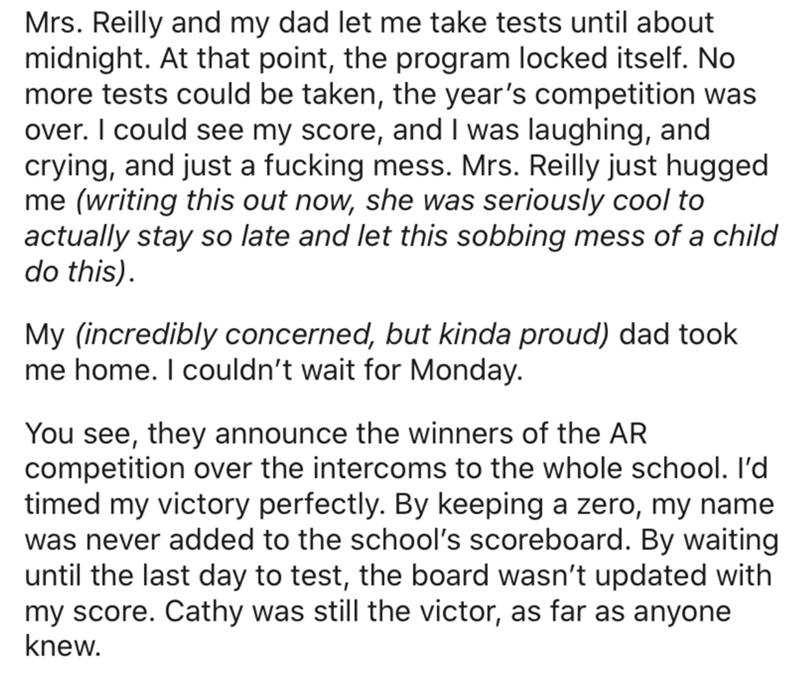 Everyone was surprised when they heard Cathy came in second place. 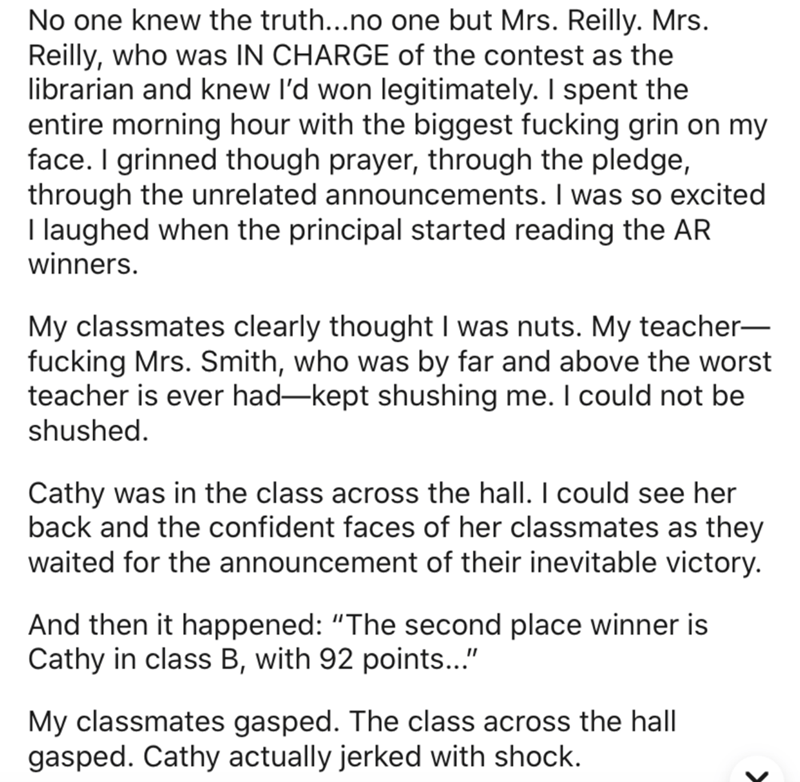 He had finally won with a record-breaking amount. 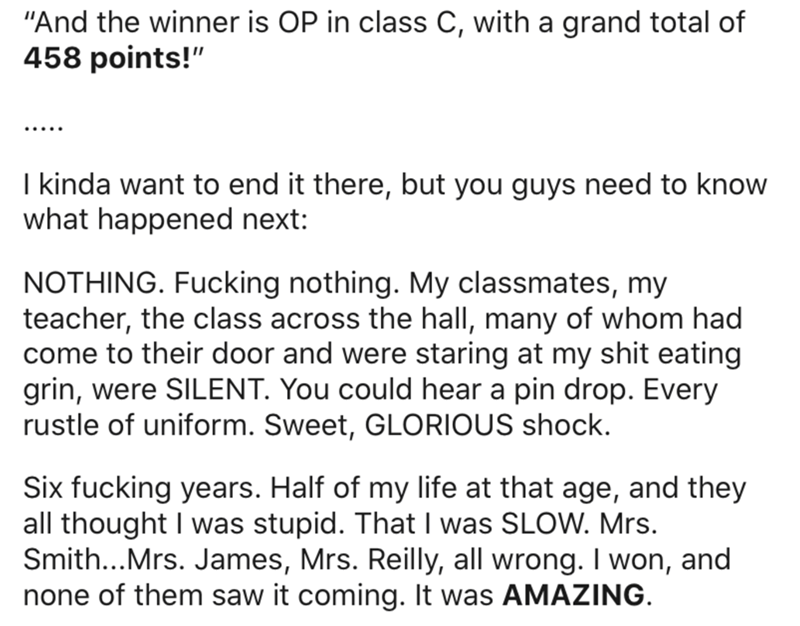 It is safe to say nobody had expected this and that was the best thing about all of this.

This also gave him the courage to stand up for himself. 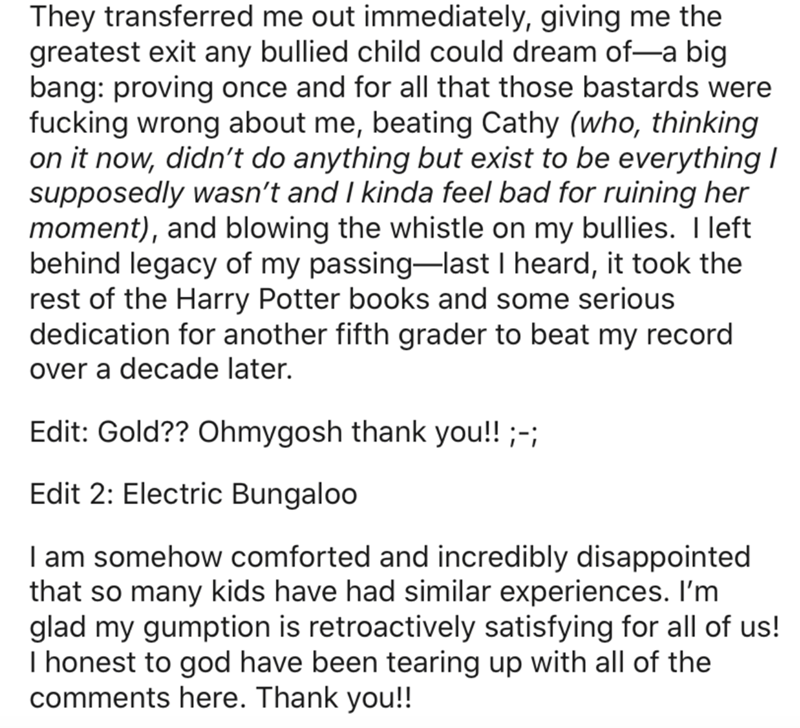 However stale, it may have been. it was the best pizza ever. 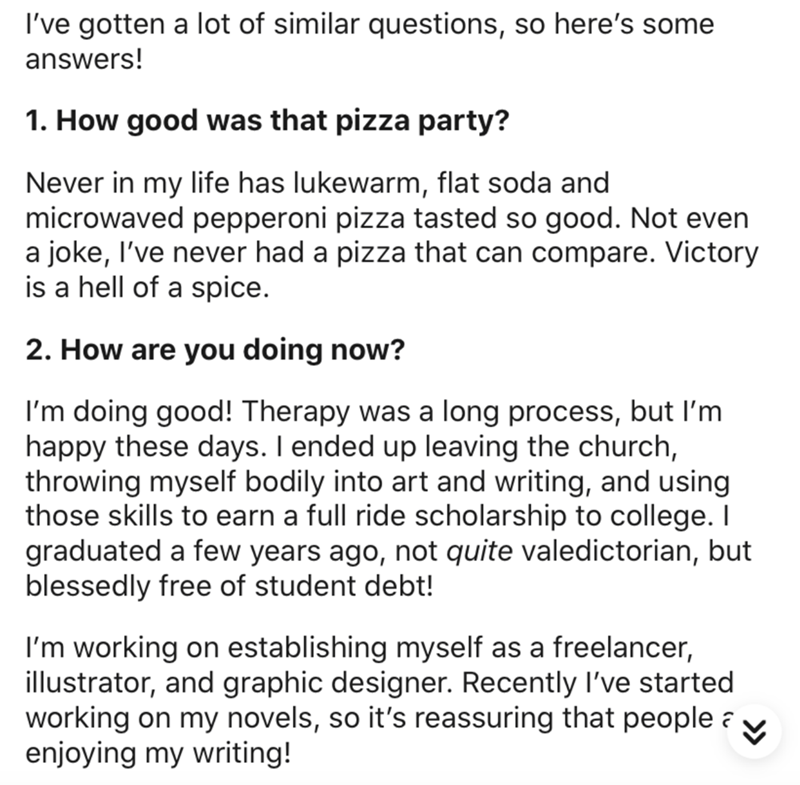 However, they were dealt with, at least it was something.

What are your thoughts on this revenge story? Comment down below and let us know.