Why would you throw someone’s lunch away?

That is the question. I mean I would understand if it was past its expiry date or there was something horribly wrong with it. However, even then you wouldn’t touch someone’s food without their permission. Now, THis may sound like the normal thing to do, we can’t forget about the people who steal other people’s food. I have no idea why they do it but this has happened to me as well.

Maybe they are just hungry and forgot to bring their own lunch? This may sound like an ‘okay’ excuse but it doesn’t fit in with this particular story. You see this specific woman not only stole someone’s lunch but even threw it away without taking even a bite out of it. We have no clue as to what the reason behind this was and we may never know.

However, what I can say is that sometimes a bit of office drama is needed to liven things up.

Isn’t this taking a small matter a bit too far?

Okay, now I get it. If anyone touched my shrimp they are done for.

I wasn’t going to make a big deal out of this. However, we are talking about shrimp here so this lady is automatically not good in my book.

The perpetrator behind it knew what they were doing.

The mystery is killing me.

So close and yet nobody ever knew her real self.

The only question I have is ‘why?’

She might throw him in the trash for all we know.

It seems this was pre-meditated. 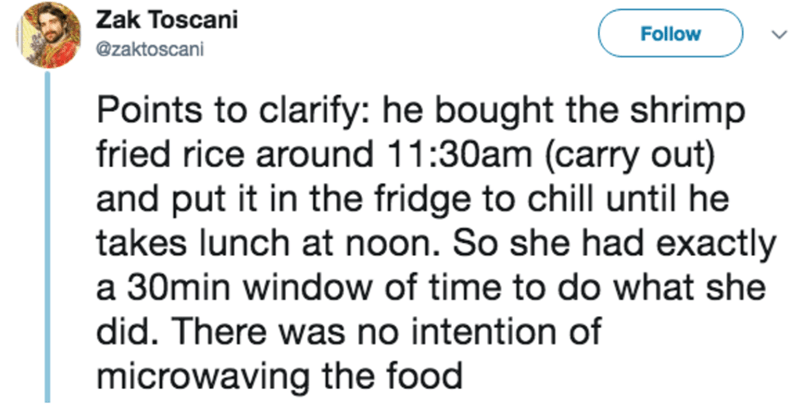 I mean stealing someone’s lunch shouldn’t be a firable offense.

I wonder what will happen when she arrives at work.

You cut the tension with a knife.

Will she realize it’s about her?

One wrong move and we are all done for.

Is she that great of an actress or just plain dumb?

He knew it was the right time to butt in.

Maybe she mistook it for her own lunch?

I mean it could happen. Perhaps she also brought shrimp rice and didn’t want to eat it anymore so she threw them away. I am trying to give her a chance here.

She knows they can do nothing to her.

Everybody knows what she did.

Can’t she understand that everyone wants to know why she did it?

Okay, This guy is just adding fuel to the fire now.

At first, I thought she might be allergic to shrimp.

But that is apparently not the case.

Maybe one day we will come to realize why she did it.

Why do you think she stole and then threw away her co-worker’s lunch? Let us know in the comments below.