Cute dogs doing cute stuff, people love these little guys. Undoubtedly, puppies and adult dogs they all enjoy all this attention. We all want to have one of these cutie pies at our homes warming not only our houses but also our hearts with their adorable actions and loving big hearts. Every puppy at the rescue centre is eagerly waiting to be adopted into a loving family. They want to be among people they can love with their big bear hearts and a place to call home. Little do they know, not every home is a loving home and not all people who adopt them are their family. There is an extremely painful, dark and gloomy side of this happy picture that will tear us apart.

A German artist named Jenny Jinya who is a freelance illustrator storyboard about less talked issues related to animals. She made a heart-wrenching comic strip about how dogs are bred and raised to become fighter dogs. This comic is not only painful for the viewers/ readers but it was hard for the artist herself to make. She said to her followers “I’m sorry it took me so long. It was extremely painful to draw.” Grab a napkin before you scroll down as it’s a very gut-wrenching comic. It’s definitely not for the faint-hearted.

This pupper just wanted to be friends. 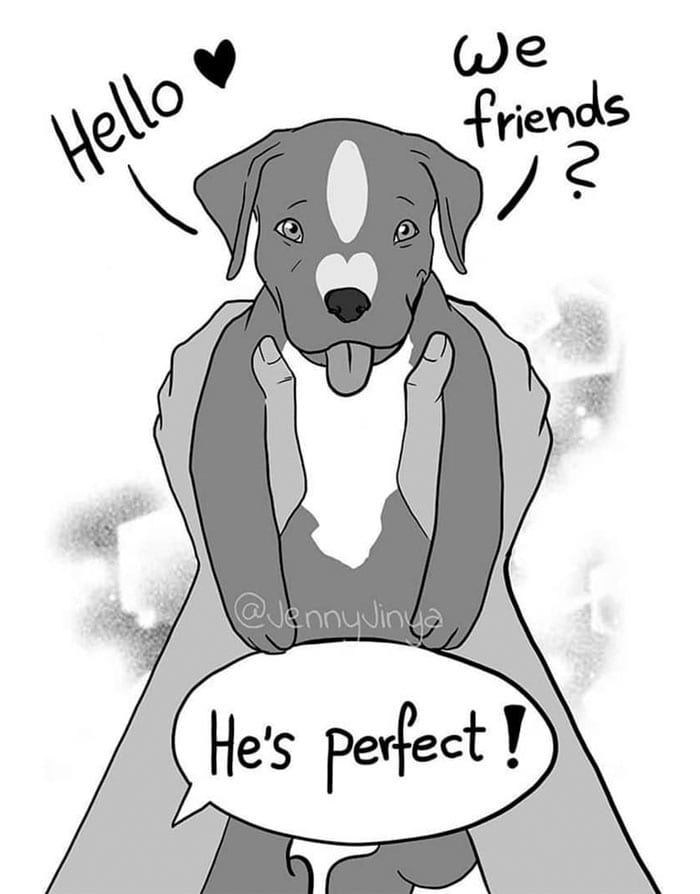 A home to call his own and a loving family. This is all he desired. 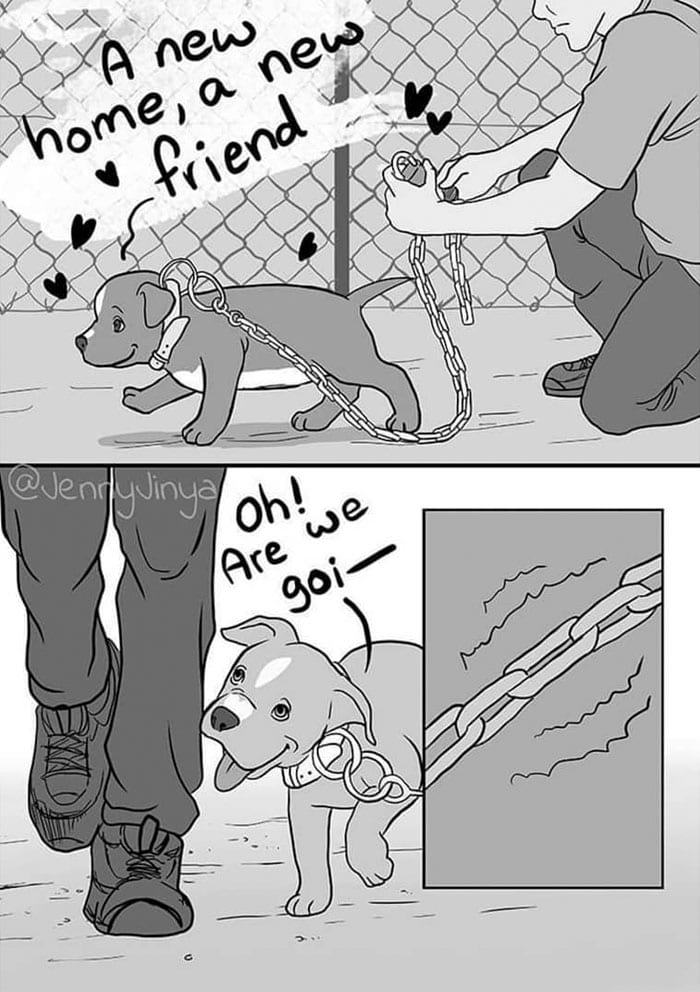 Some inhumane people “buy” puppies (because adoption is a word unknown to such individuals or groups) And train them to become fighter dogs. They crop their ears and tail so the pupper doesn’t get dragged by other dogs during the fight resulting in losing the match. These puppies are not given the love and care they deserve rather they are drugged and kept into isolation. They are trained for this blood game and once they are game ready they’re all set to fight and people bid money on them. 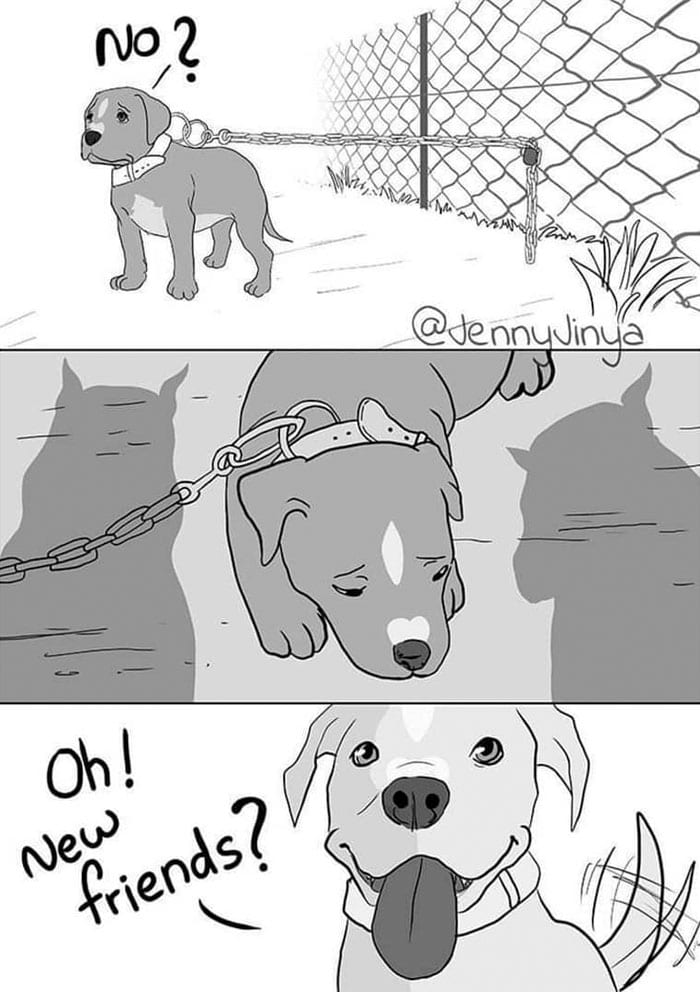 What goes down on the dark side of the story is heart-wrenching. 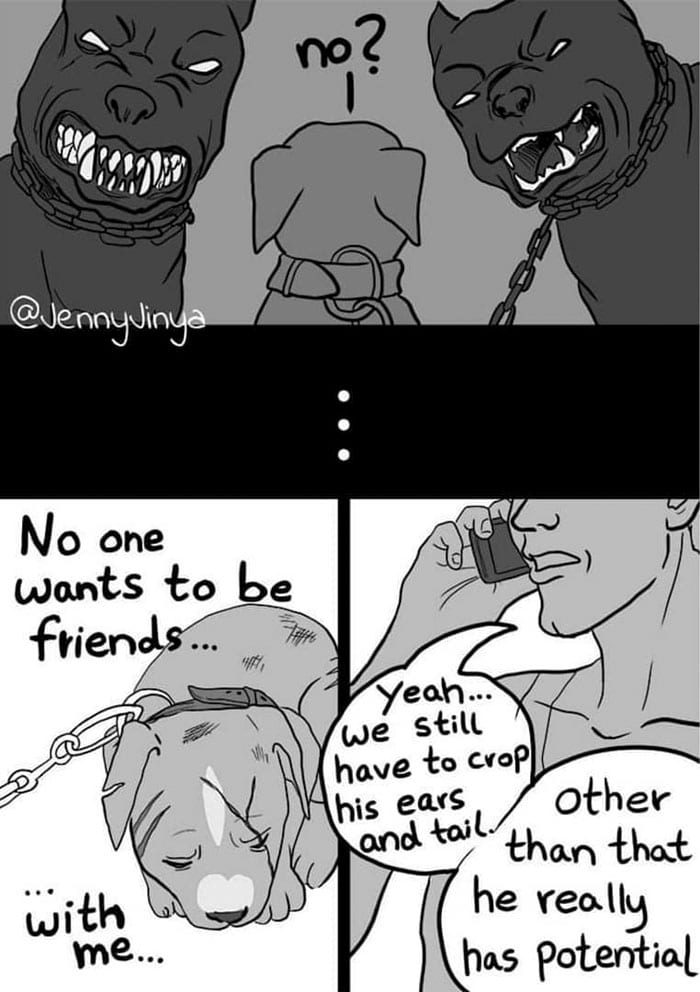 They are given different types of drugs to prepare them and train them into fighter dogs. According to research conducted by Hanna Gibson at the Michigan State University College of Law in the year 2005 titled: “Detailed Discussion of Dog Fighting,” those drugs and supplements are iron and liver extracts, vitamin B-12, Provim to strengthen their gut and immune system, hormones like testosterone, propionate, repotest and probolic oil. They are also given supplements to gain weight and also steroids like Winstrol V, Dinabol and Equipose. On top of all this, they are drugged with cocaine. Other types of drugs are also given to these poor souls to help gain aggression in order to mask their pain and fear during the fight.

They are forced into fights they never wished to be a part of. 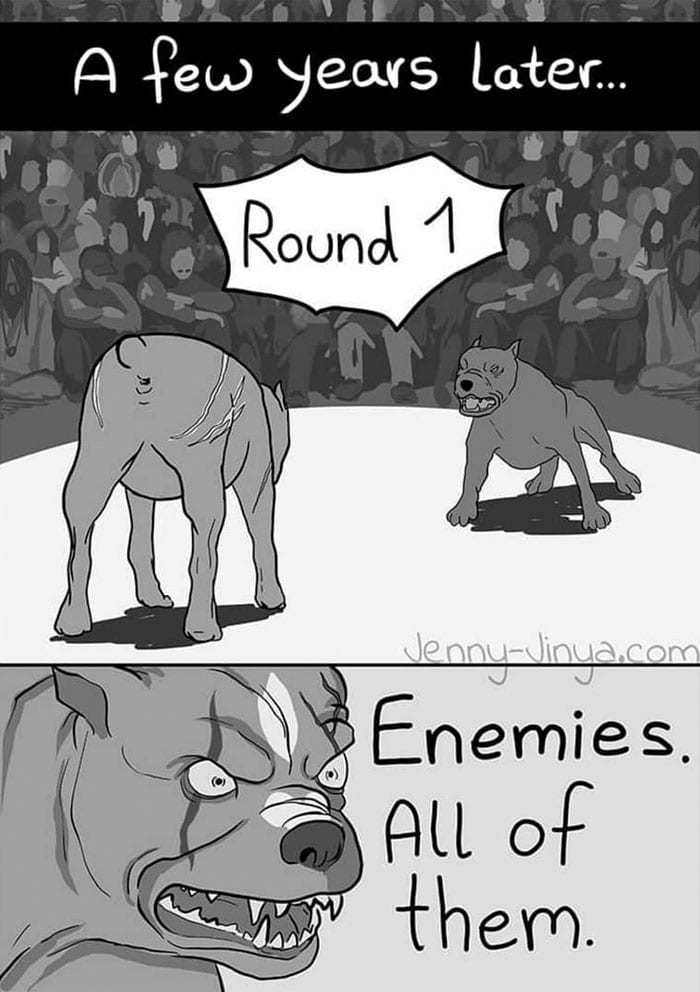 Fighter dogs are raised and trained to act aggressive, the artist with 312K Instagram followers did her research on this matter and was heartbroken while she shared the story. This is what she said:

“Conducting research about the issue in question is always depressing enough, but when I sketch out the storyboard, a few tears run down my cheeks, too. The dogs are raised in isolation, drugged, abused, and mistreated since they were puppies. Conditioned to be aggressive and ready to fight.” 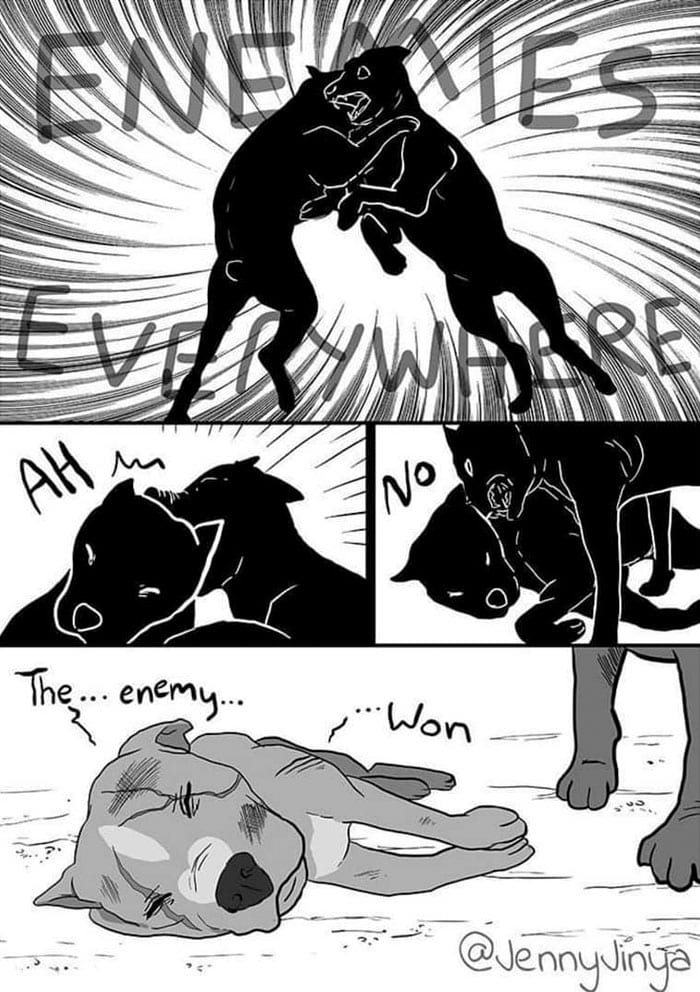 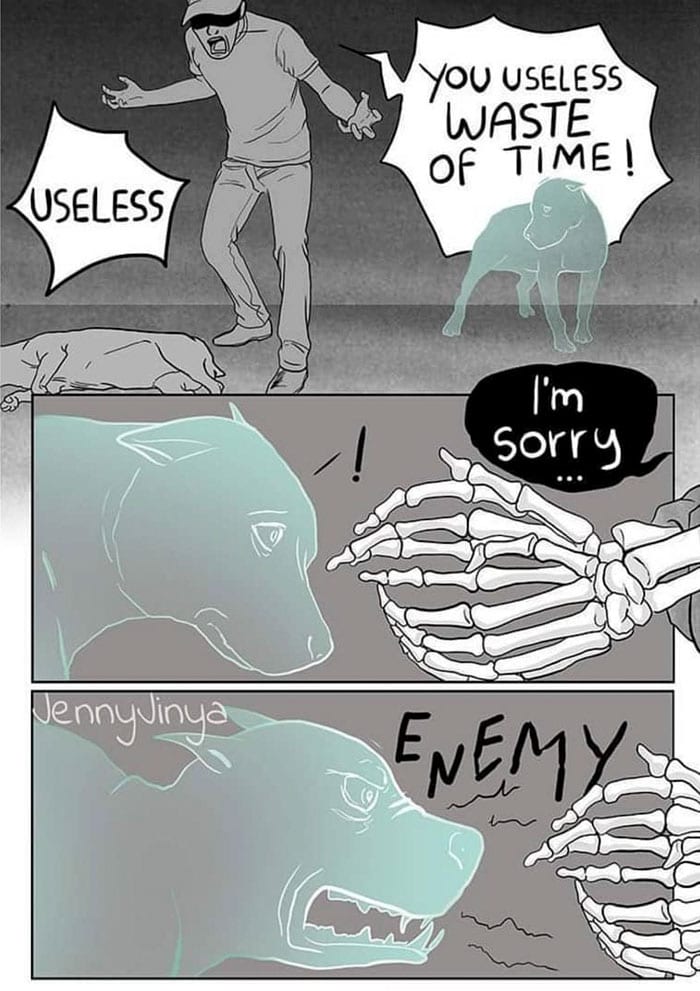 They didn’t understand what the word “friendship” meant. Now, the little buddy has finally found its happy place, a friend and a loving home as he rests in peace. 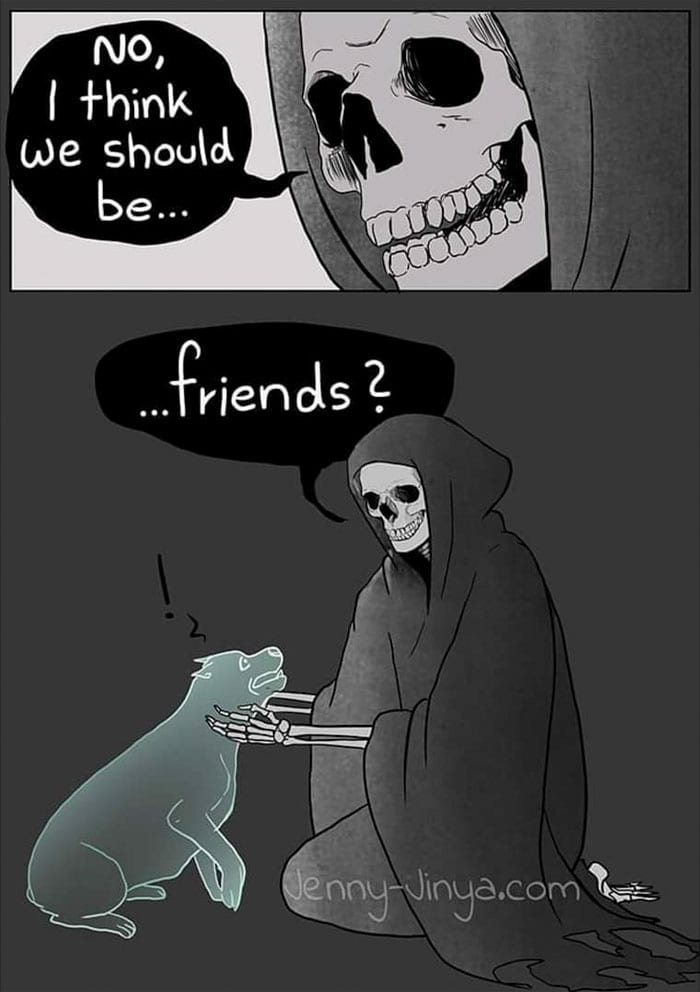 This is how heinous this crime is… 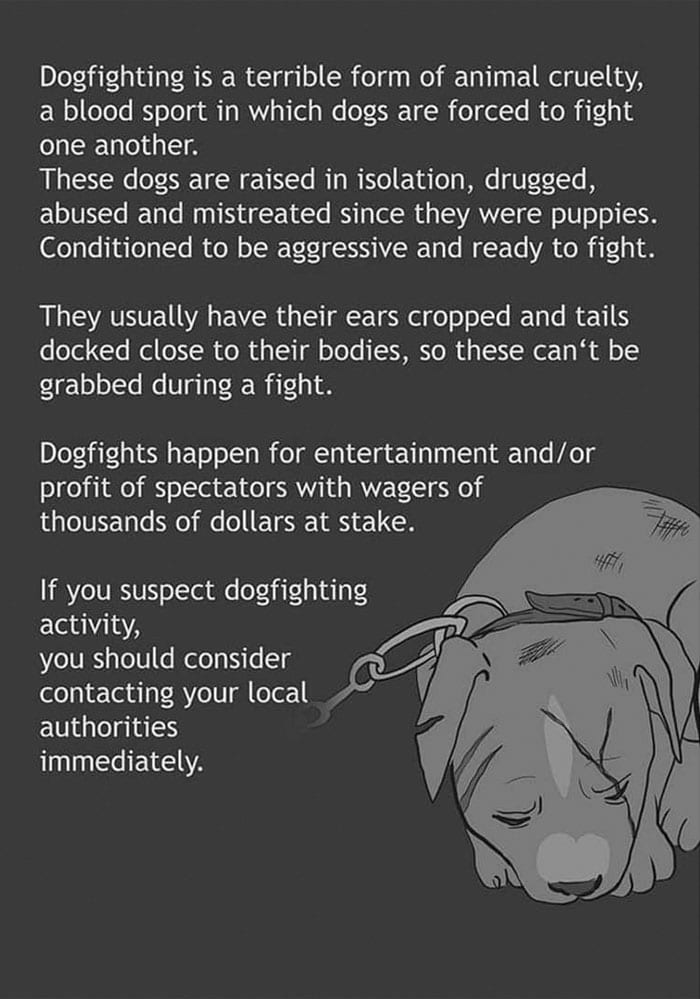 Even the artist was in tears making this comic. 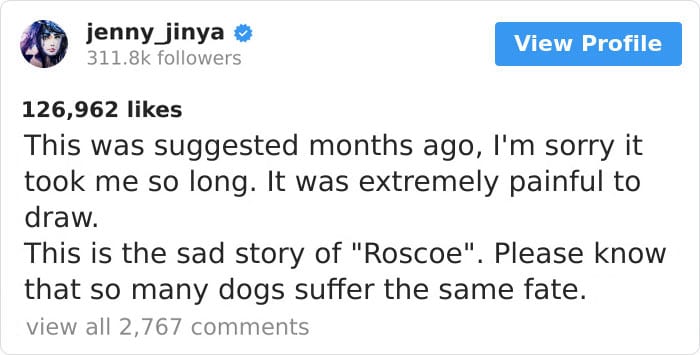 These are some of the comments from the readers of this comic and we’re all in tears.

We are just reading this story, imagine how the poor puppers feel when it all happens with them in reality… This is a heinous crime and it has to stop. We all need to take a stand and work against it in order to free our fluffy little members of the society. It’s about time we share this to spread awareness about this ridiculous crime and educate others.

If you know someone who is involved in such an activity, it is now time you report them, help the innocent animals and abolish this cruel cult. Break the chains and take a stand!