These cats chose these people.

I know we have always thought that we are the ones who adopt or rescue a cat. But in reality that is not true. As we have said time and time before, we are their butler and that means they are the ones who have all the options. So when the following people found intruder cats in their homes, they had no choice but to take care of the fluffy cats. From neighbor cats wanting to watch tv to ferals wanting a warm place to stay for the night, there is all sort of stories here.

And it is especially heartwarming to see a feral cat getting a home to stay in. We have compiled this list, all thanks to the Facebook group aptly named “My House, Not My Cat”. As you can probably tell, their members like to post about instances when they found a stranger kitty in their house and didn’t know what to do. Do they feed her? Do they give her a bed? Or is she someone else’s cat? Those are the things that come to mind when you hear a little meow coming from your kitchen and you don’t even have a cat.

So just scroll below and take a look at some of the most adorable cats ever.

#1 She might be a stranger, but she demands food.

#2 Since lockdown, this cat has chosen this house.

#3 Their garden, but not their cat.

I have cried for the last 3 days. I have never been a cat person. I grew apparently VERY attached to my not my cat. I have bought him cat toys and a giant kitty tower. He went missing 4 days ago. I have cried since day 2. I have kitty kittied and walked my property so many times. Yesterday I broke and sobbed just knowing something had ate him.

I checked at 2 AM for the probably 20th time to see of he was home…nothing. This morning I cried again…my not my cat came home!!! He ate his food like he was starving and then chattered and meow at me like I never fed him. I see now how humans become cat slaves…there has to be a magical bond somewhere.

#4 This abandoned kitty found a home.

#5 She gave birth now she doesn’t want to leave.

My husband and I went all over our house, opening cabinet and closet doors in an attempt to free whichever kitty of ours had managed to trap his or herself. According to the vet, the kitty was malnourished and suffering from ringworm on her ears. She was so young that she still had her milk teeth. In order to treat the ringworm, we had to massage an ointment all over her ears AND let it sit for 15 minutes before washing it off. All without her messing with it.

This is when I learned she was so freaking tiny that I could plop her entire body into a Crown Royal bag, gently draw the string just over her shoulders, treat her ears, and keep her safe, snug, and still until it was time to wash off the goo and let her free. Five years, and a lot of love later, her fur grew back and she fluffed up, though she’s still rather diminutive for a full-grown cat. Today, Not My Cat is now my beloved MoonShine.

#9 I brought a friend, hooman.

#11 This one is just helping cook.

#12 Not their cat and not their sponge either.

#13 Maybe they are planning a heist and doing some recon?

#14 This one went through a tough time but now has a home.

Last week we found him in front of the house, something terrible had happened to him so we brought him to the vet. The vet had to remove his eye. He’s been recuperating in our spare room since. Yesterday I brought him back to the vet to have his stitches removed, get him neutered, and updated on vaccines, deworming, etc.

The vet said he’s healing up really well and that he’s put on weight! He’s wearing a shirt because he kept licking the anti-tick and flea meds on his nape (he doesn’t seem to mind at all, he’s walking around like he wears shirts every day). We have decided to keep him, he’ll never be allowed outside again. He’s such a sweet cat, he loves belly rubs and doesn’t bite. The next step is to introduce him to our sassy tortie girl.

Please tell him how handsome he looks.

#15 This is the neighbor’s cat who spends all day at someone else’s house.

#16 This chonky cat was adopted by a lovely family. 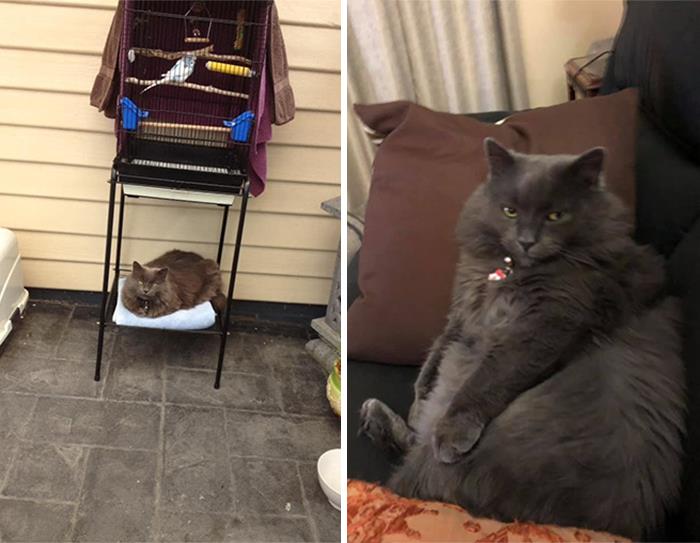 #18 This kitty just popped in to say hello.

#19 These cats have decided this house is theirs.

#20 Nobody knows where this cat came from.

The reason some cats go into homes is that they have naturally curious minds. After all, the saying ‘curiosity k*lled the cat’ wouldn’t make any sense otherwise. However, sometimes a feral cat might come in because she needs someone to take care of her babies, and doing that out in the streets is not easy work. So when cats get pregnant, they try to find a suitable home so someone can take care of them. So it turns out, they’re quite intelligent.

#21 Just had a quick jaunt through the house.

#23 I wonder who those paws belong to.

#24 One is their cat and the other is their friend.

#26 Not their kitty yet but might be in the future. 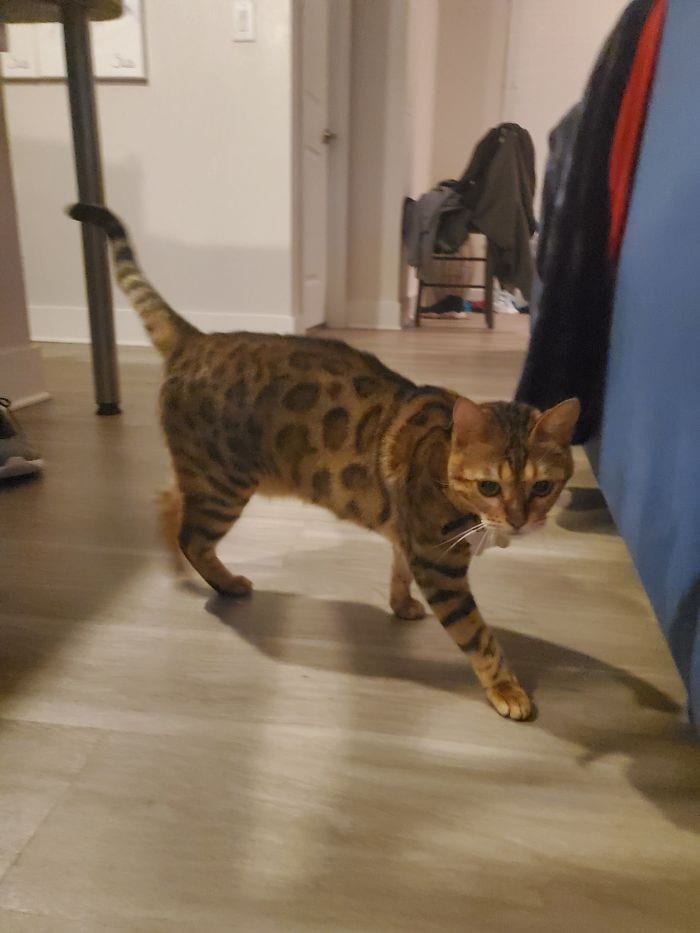 #27 Olive is the neighbor’s cat though maybe she doesn’t know it herself. 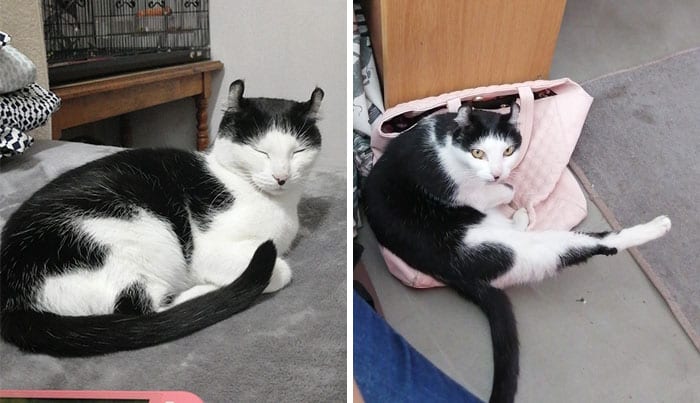 #28 They already have two cats but this is a new development.

#29 The laptop might be theirs but the paws stopping them from working is not. 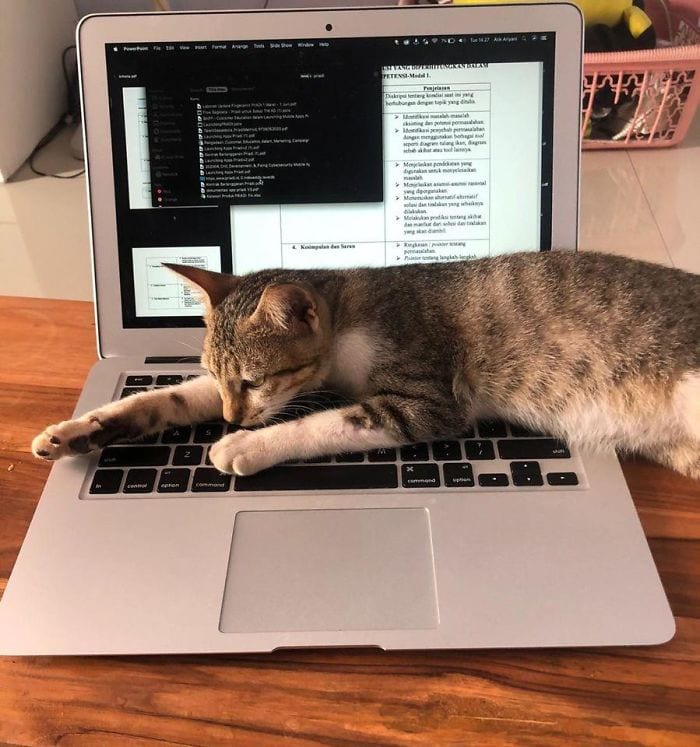 #32 This clever typhoon is theirs now. 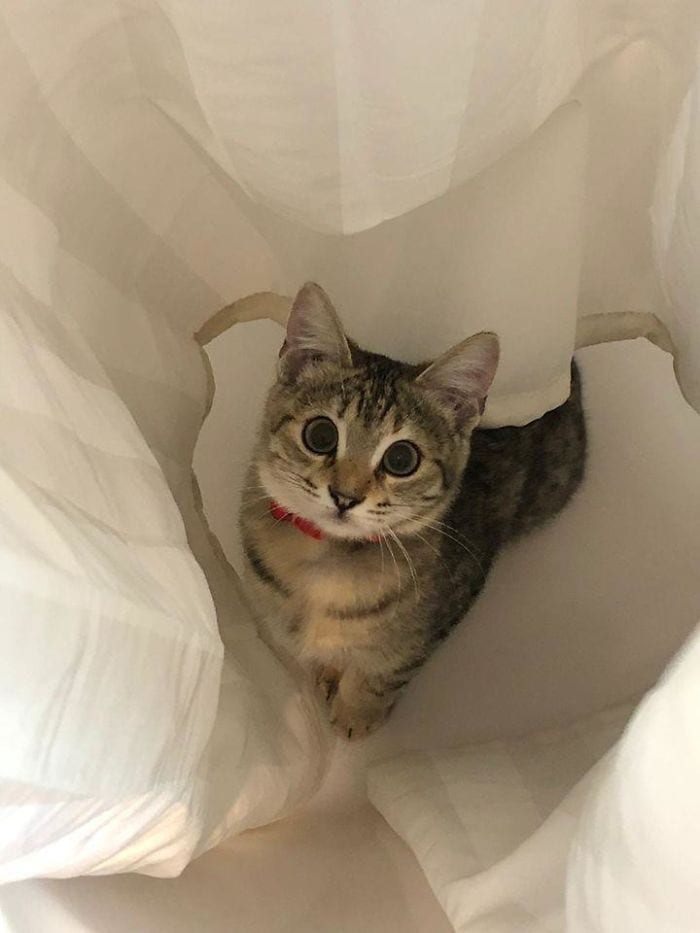 She followed my daughter home from the neighborhood store, walked right in the house, and snuggled up. She pretended to be sweet, loving, and cuddly. After one week of searching for her owner, we figured we would keep her. She must have used her spidey sense because she went from being a loving sweet kitty to a holy terror of a devil cat. She brings in at least one dead bird a day, body slams our other cats, smacks the dog, and will eat anything and everything you might leave on the counter.

She has even jumped into the oven and we found her inside the refrigerator once. She wasn’t our cat, but she made sure she ended up being our cat.

#33 Yes, This possum does not belong to them.

#34 This is a feral cat finally giving in and letting a hooman pet them.

#35 Not their cat but certainly hungry for food.

#36 This fluffy kitty has claimed this hooman as her own.

#37 A surprise kitty litter later, they now have a cat.

This is Tiger. He lives nearby me. He has humans, but they don’t take great care of him. He was attacked by an animal and developed an abscess on his head which I treated a few months ago, and he began spending more and more time bouncing between my porch and my neighbors’.

Someone set out a bed for him. I began giving him wet food and flea treating him. Finally, I bit the bullet and got him combo tested to make sure he was safe to allow around my two cats— negative for everything. So…maybe he’s part-time my cat.

#39 This cat and her babies call this place home now.

#40 Not their cat photobombing them.

I found out recently that this cat I’ve been feeding 3 times a day is not a stray, but belongs to a neighbor at the end of our street. I was showing her random photos on my phone and she asked why I had so many of her cats. This cat is a six-dinner sid and I am a sucker.

Have you ever found a cat that was not yours in your house? If so, what did you end up doing? Comment down below and let us know.