Everyone seems tough over the internet.

People like to argue on the Internet a lot. It isn’t like it is going to get you somewhere. Because these days people argue just for the sake of it. They don’t want to understand the other person’s point of view. And while everyone is entitled to their own opinion, we should respect what other people have to say. There are always civilised methods of having a discussion, or even an argument, but some people don’t understand that. On the Internet, everyone is a thug or gangster.

However, the truth is that these are only keyboard warriors. Usually, when someone threatens you over the Internet, it is all just a load of bullcrap. These are cowards that can’t actually face someone in real life. This fitness instructor faced a “tough guy” over the Internet who couldn’t pay $20 for services, yet had the time and money to travel to another city just to beat someone up with his “boys.” Scroll down below to read the story:

So the guy contacted the instructor regarding his bad eating habits. 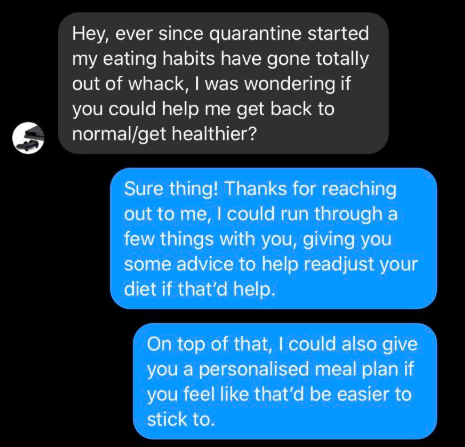 He was on a budget and asked for reasonable pricing, which was given to him. 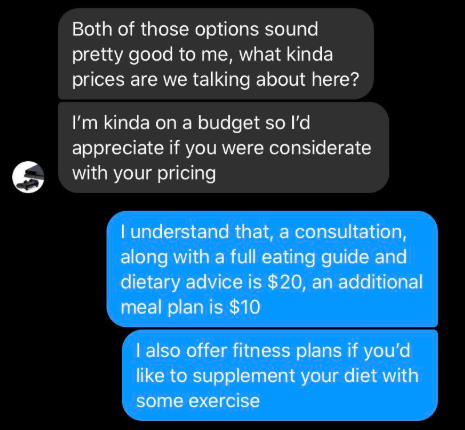 However, he had a problem with paying $20, so instead of bargaining, he resorted to threatening. 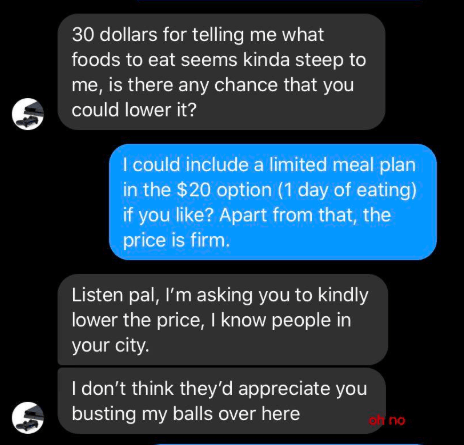 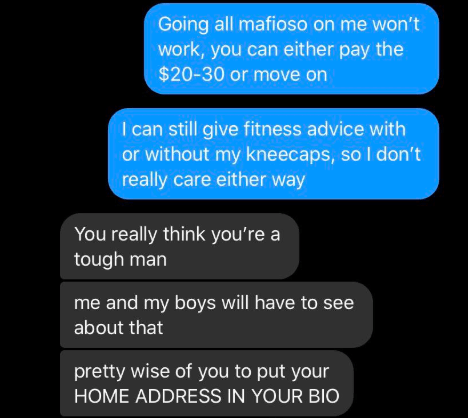 But here is my favourite part. He’s going to show up at Peter Griffin’s house to beat him up.

Even though people who threaten others over the Internet usually don’t do anything about it, we still shouldn’t take risks. We have no idea who the other person is or what they are capable of. We’ve heard far too many stories of stalkers and murderers hunting people down via the Internet so we should stay cautious and safe.

This is what other Redditors had to say about the whole incident.

This is definitely the kind of thing a person does when he is eating paint chips.

This person was really reasonable.

These suggestions are the best.

Finding loopholes for the tough guy.

What is your take on this? Do you think we should take people on the Internet seriously? Let us know your opinions in the comments below.