Not everyone likes bras.

And it isn’t just about ‘showing those men that women can do anything they want.’ It is usually about wanting to be as comfortable as want. And for many bras can hurt a lot especially if they have an underwire. Not only that but they can also put a strain on your shoulders No matter how expensive the bra is, it is bound to leave impressional marks from where the straps sat or where the underwire was.

That is just one of the reasons why the best thing in a woman’s day is coming home and throwing the bra they have been wearing all day on the floor somewhere. While it is true that some women would never go out without some sort of support, others are completely fine going bra-less. And at the end of the day, we shouldn’t make such a big deal about it. However, at work, you have to dress in a professional manner, and apparently not wearing a bra is not professional according to this Reddit story.

She is new to this job and this was never an issue at her old workplace. 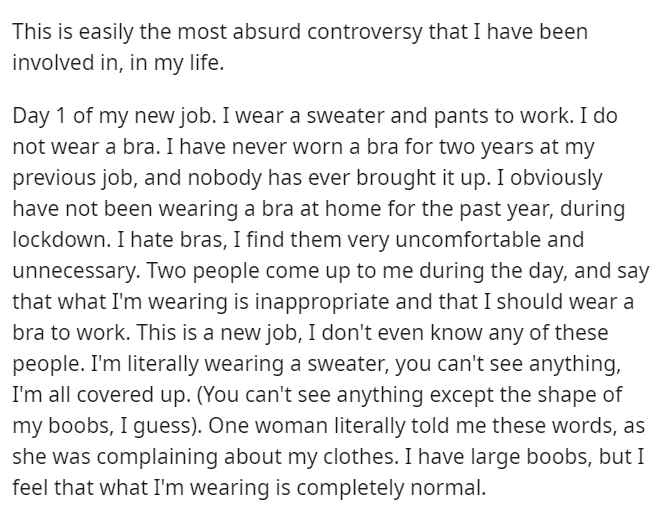 However, in only two days she has had to listen to quite a few complaints about how the shape of her breasts was clearly visible

She then went on to clarify that nobody could see her nipples through her clothes so she was fine on that front.

Surprisingly enough, people had varying thoughts about she should approach this issue. 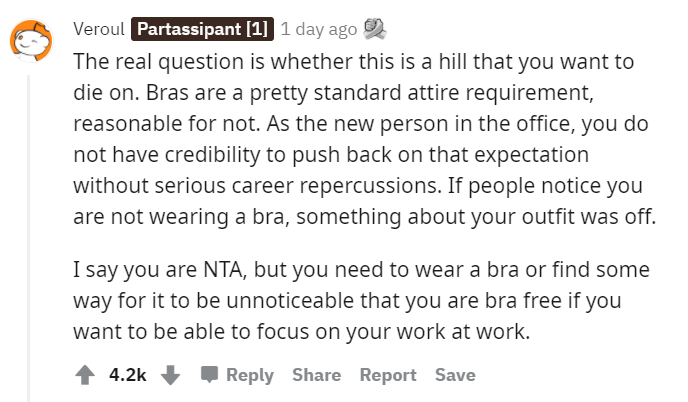 NAH: Companies have standards of dress. When I was a flight attendant, it was actually in our dress code that bras, hose, and shapewear HAD to be worn (early 2000’s) the airlines (and most customer-facing jobs) have uniform and dress codes that are meant to reach across a broad spectrum of standards for professionalism. Most professional environments prefer that you wear appropriate undergarments.

If you are over an A cup, people are going to be able to tell that you aren’t wearing a bra, doubly so if it’s cold in the office. No one is “staring at your chest.” If your breasts are flopping and bouncing and your nipples are showing through your blouse, you need to wear something underneath, at least at work. Even if it is just a bralette or a snug-fitting cami. Every man I know wears an undershirt at work for this exact same reason (Minus the bouncing part). –Outofworkflygirl

While most agreed that not wearing a bra is not a big deal but does she really want to risk her new job over this? 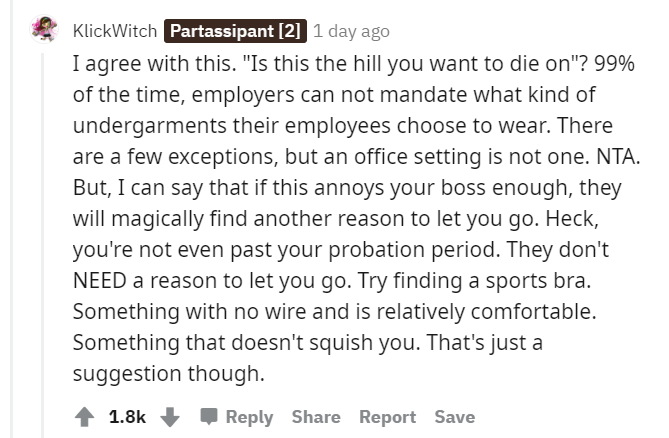 And some even gave her thorough advice on how she should deal with this in the correct way. 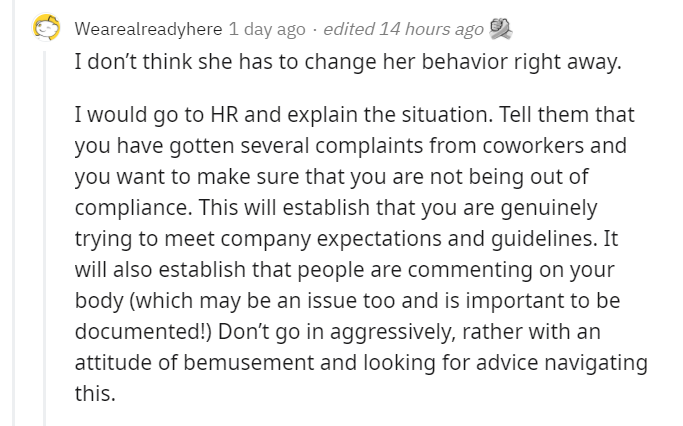 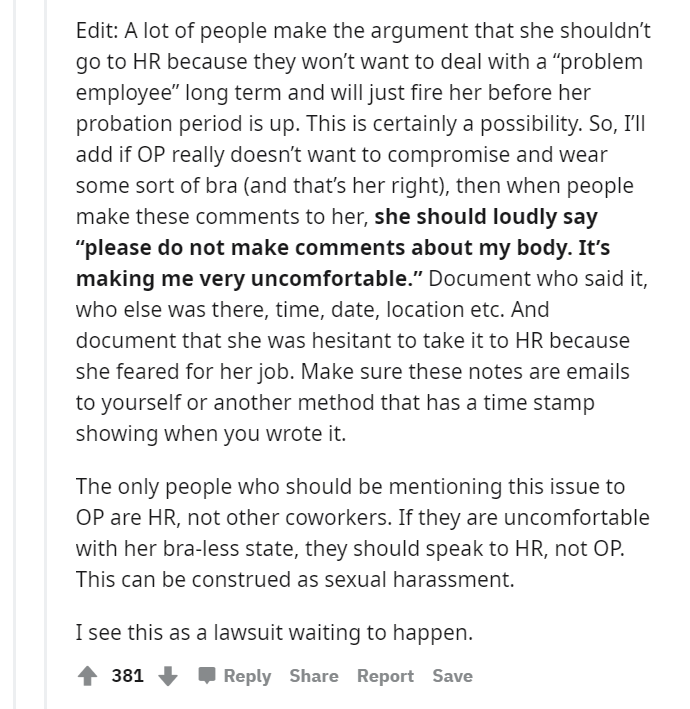 We would all like to think that nobody can police our undergarments but that is not how the world works. 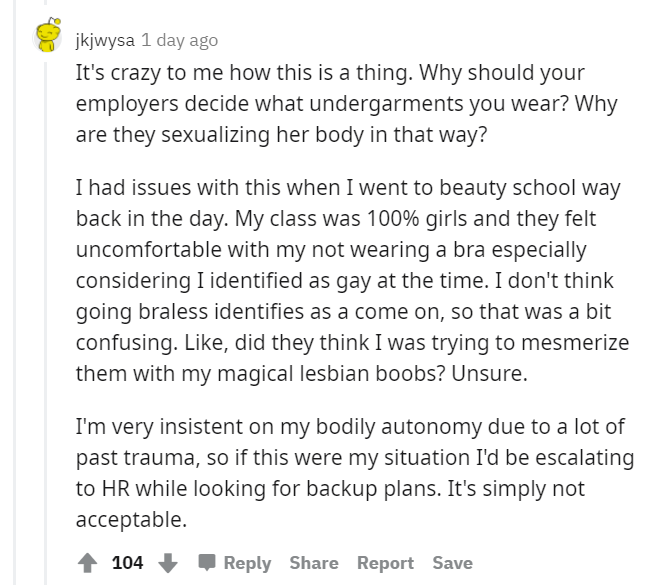 It should a person’s choice if they want to wear a bra or not but that doesn’t mean that is what happens in reality. 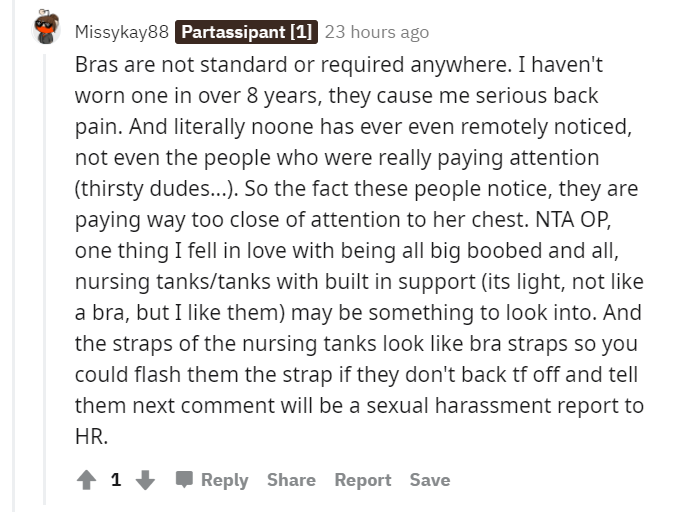 All in all, people are quite torn about this and most people can’t agree on what she should do in the future. 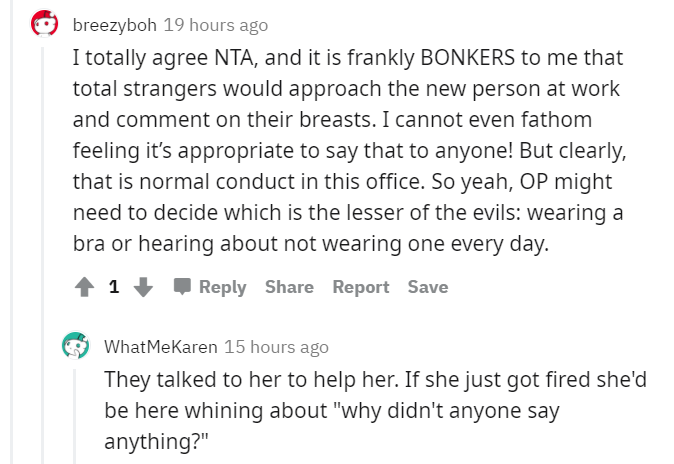 This user even explained how wearing a bra can actually be and for your health. 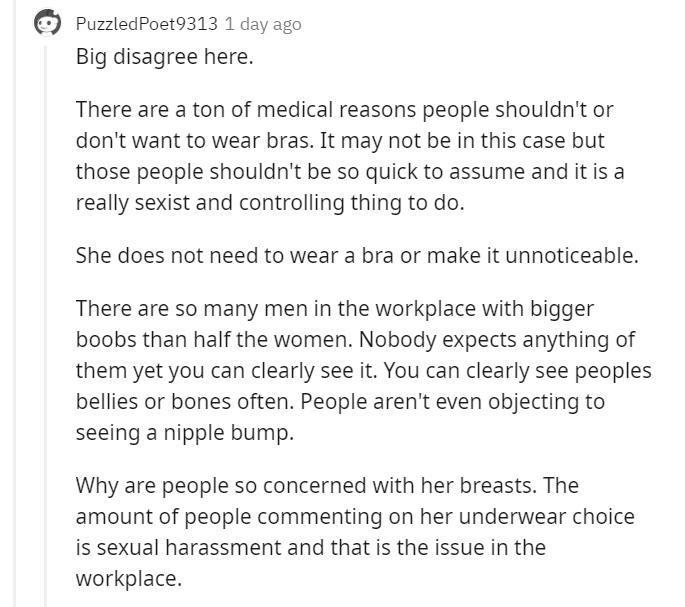 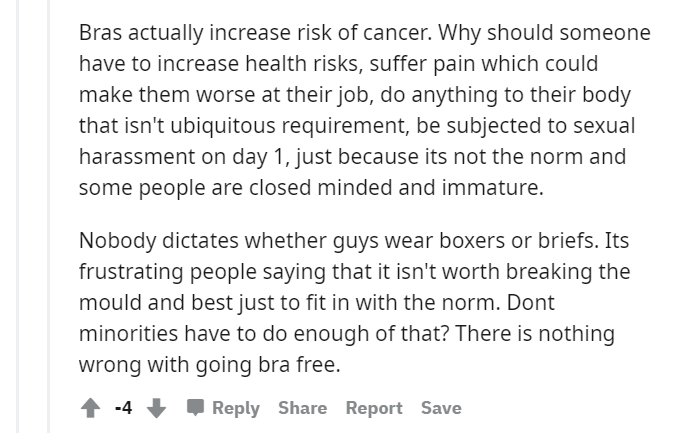 However, we do not have conclusive facts to make that judgment yet.

A 1991 case-control study found women who didn’t wear bras had a lower risk of breast cancer than women who did wear bras. However, the authors stated this link was likely due to factors related to wearing a bra rather than the bra itself. The women in the study who didn’t wear a bra were more likely to be thin, which the authors concluded might account for their decreased risk of breast cancer. -Eur J Cancer

It is true that hiding whether you’re wearing a bra or not is much easier for small chested woman. 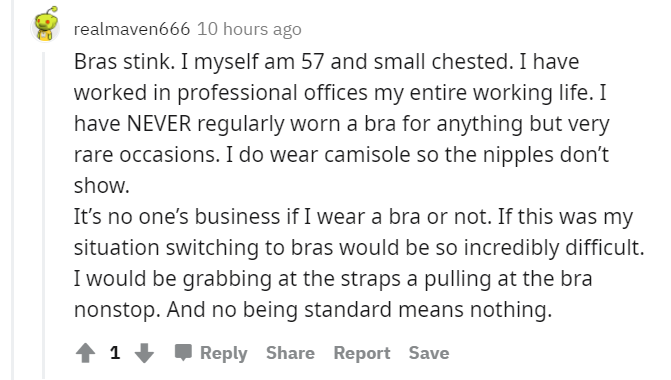 Most people can agree that she would have to listen to her co-workers if she doesn’t want to get fired. 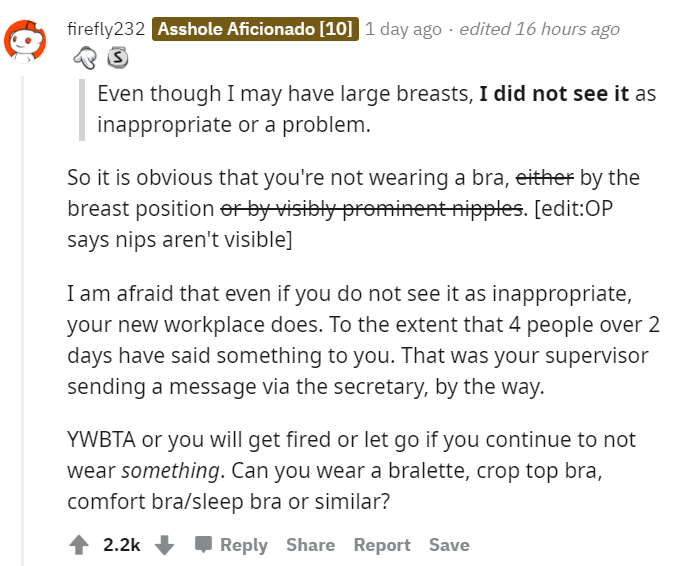 Whether she takes all the advice she has gotten is up to her. 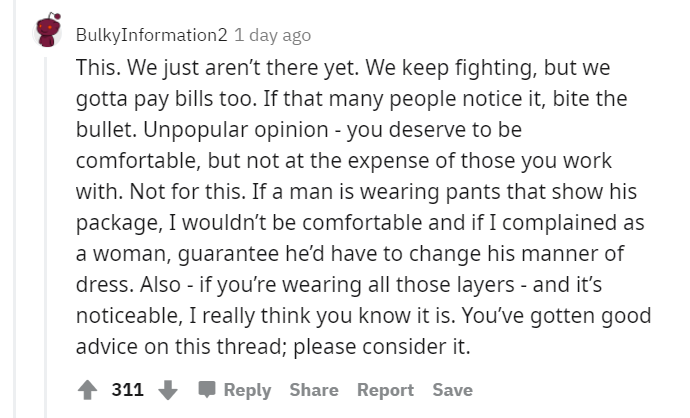 What do you think she should do in this situation? Should she continue to not wear a bra and take these ‘complaints’ to HR or suck it up and wear one so she doesn’t put her new job at risk? Comment down below and let us know.