Does a job have anything to do with your marital status?

In my opinion, the clear-cut answer is no. And even if your partner is a millionaire, that doesn’t disqualify you from any job that you want to have. And I thought this was pretty clear to everyone but apparently not. Because we have a story right here of a woman being denied a raise and the reasoning behind it is that her husband earns good money and that she doesn’t need the extra money as much as some ‘other men in the office’.

I honestly don’t even know how to start. How about mentioning how illegal this is? I mean people can’t really refuse pay based on their gender or even marital status. And what does your partner’s income have to do with your job? Does being married mean that you and your partner become one person? Of ofcourse not so why do people think this is okay? Yes, I am just as gobsmacked as you are. And the husband in question is the one telling the story which you can read for yourself by scrolling below.

This might be a short story but I am sure that this will make a lot of people boil with anger. 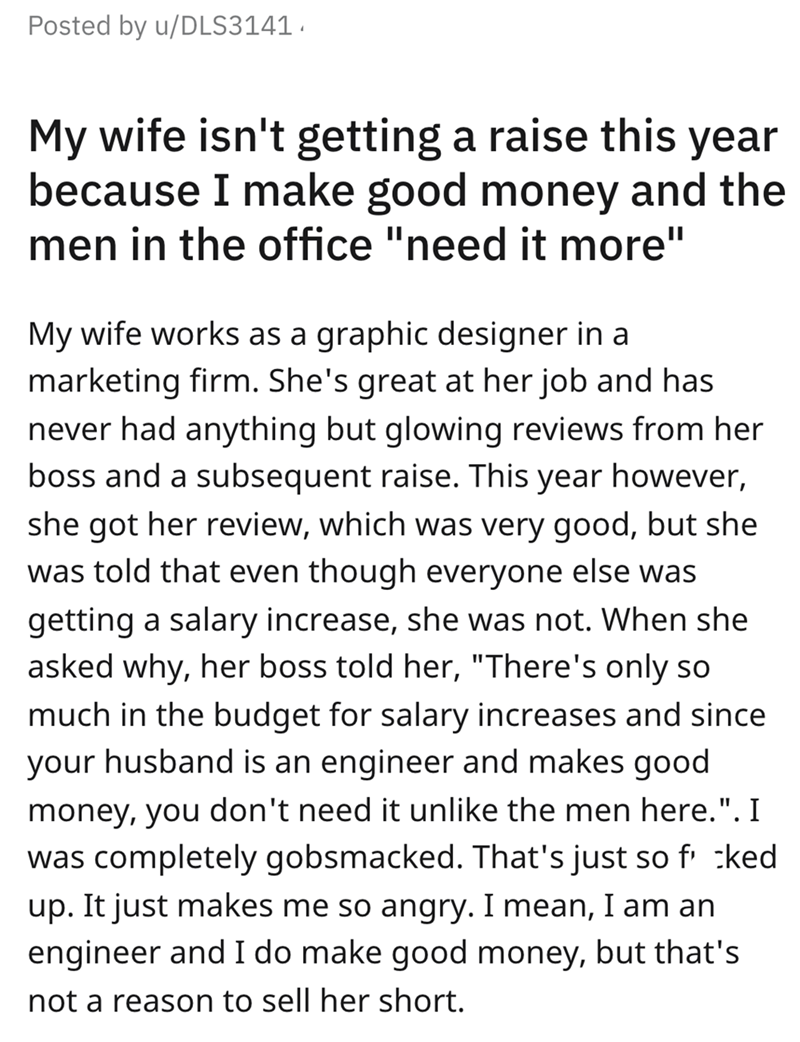 Honestly, she needs to look for a new job because who knows what will happen next year? Will they do the same thing? 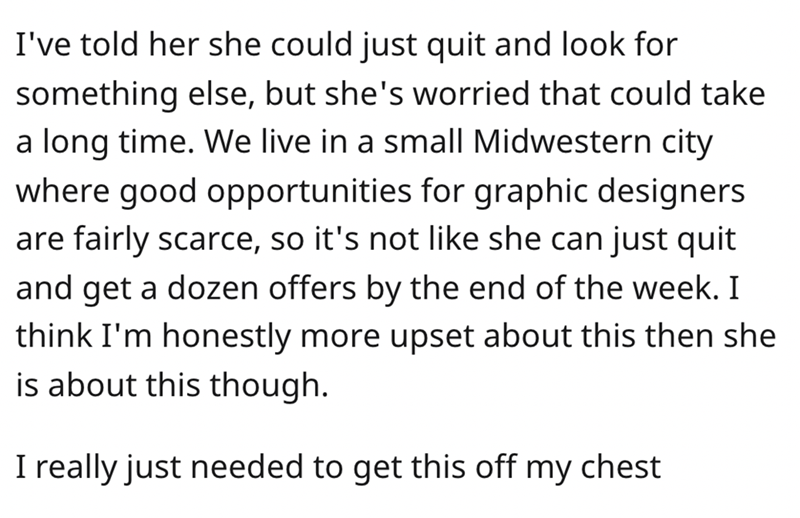 I am surprised that the manager hasn’t already been sued. I understand that the person doesn’t want o make a big deal out of it. And I also understand that sometimes you have to stick with a job even if you’re not getting paid nearly enough because that is the only option you have but this is plain weird. I have seen a lot of things on the Internet and yes I have seen a lot of wage gaps between genders but this is the first time I have seen it happen because of marriage. The manager needs to be put into his place as he needs to learn that this is highly illegal.

People in the comments had a lot of good advice to share and told her to get everything in writing so she had proof. 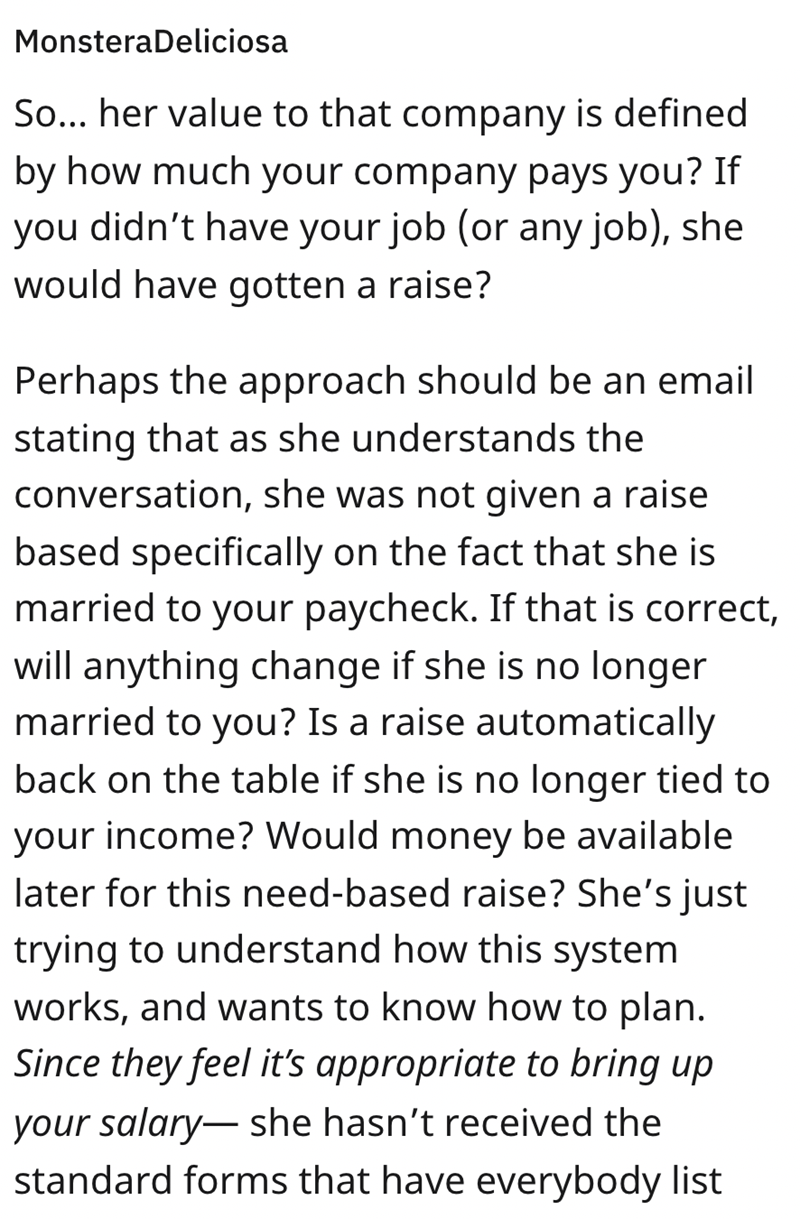 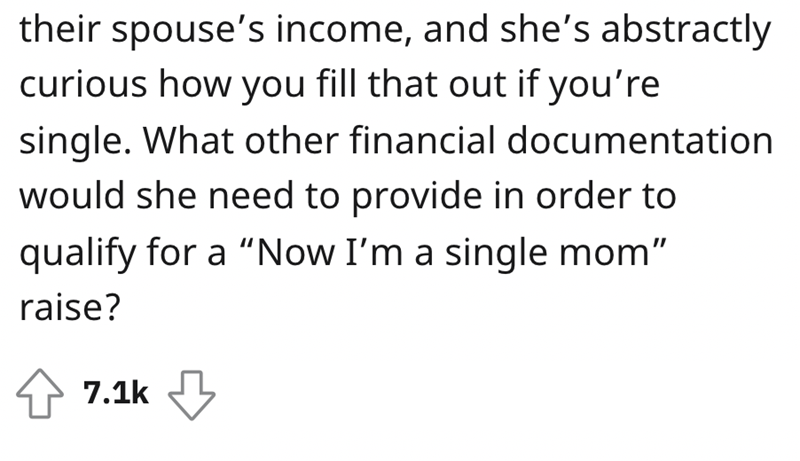 Even if she doesn’t intend to sue, it is necessary to have a paper trail because you never know what will happen in the future. 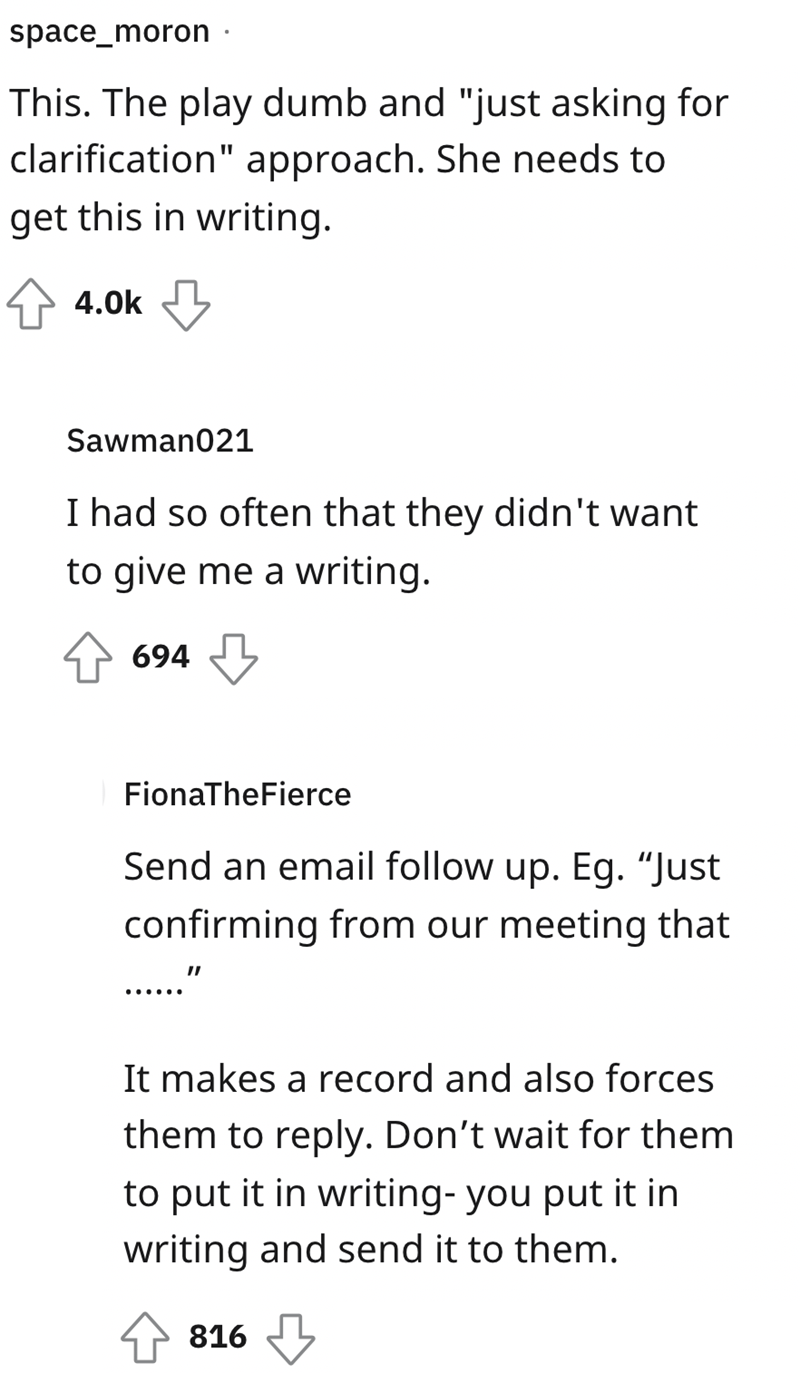 A clarification email might also make it clear to the higher-ups that they are in the wrong and this can cause a mess if not handled properly. 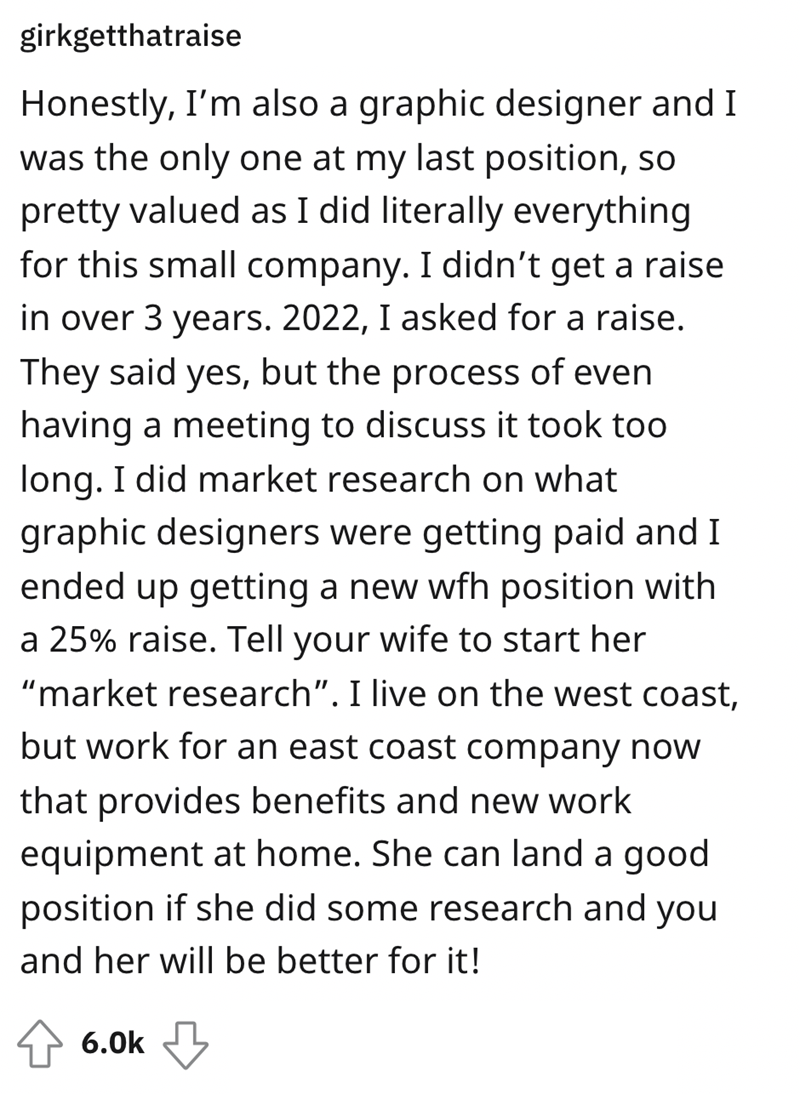 She needs to get this in writing however she can or she should simply leave this job as soon as she is able to find a better opportunity. 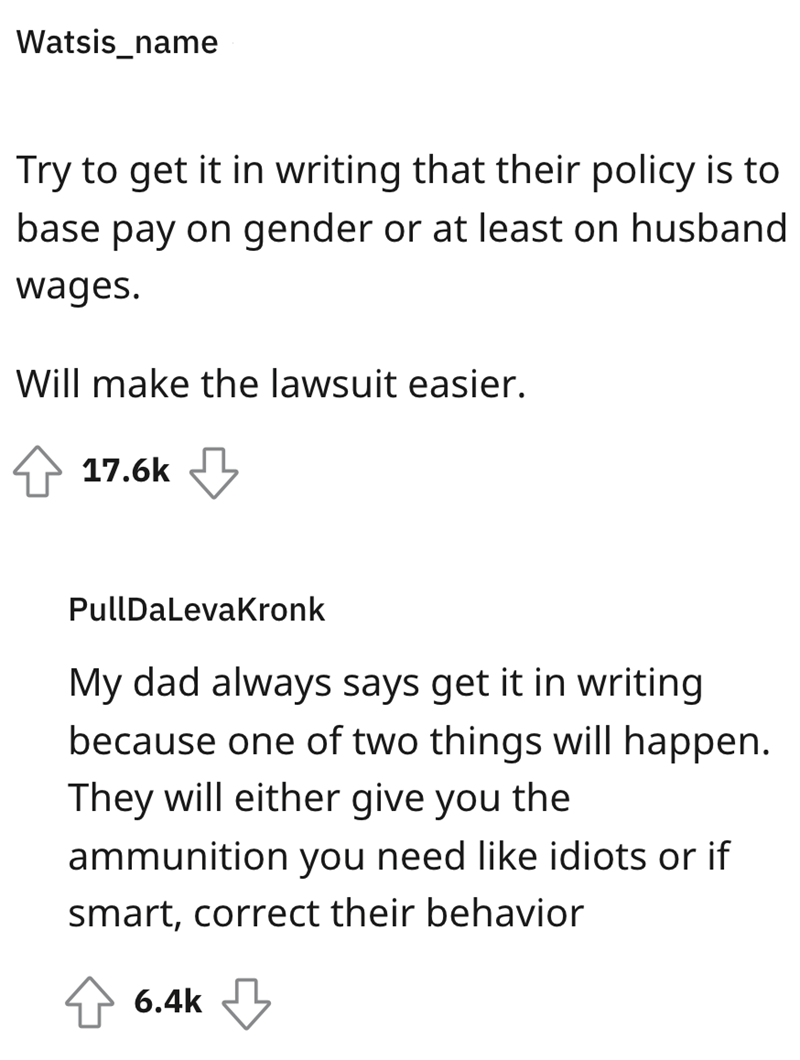 The threat of a lawyer always manages to straighten up people like these but sometimes it can sadly backfire. 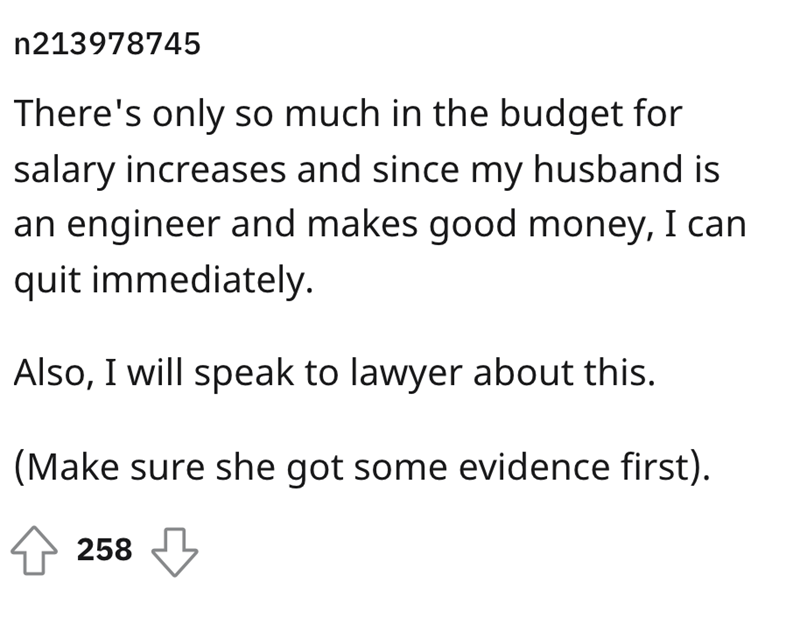 This comment put another view forth which is honestly quite scary. 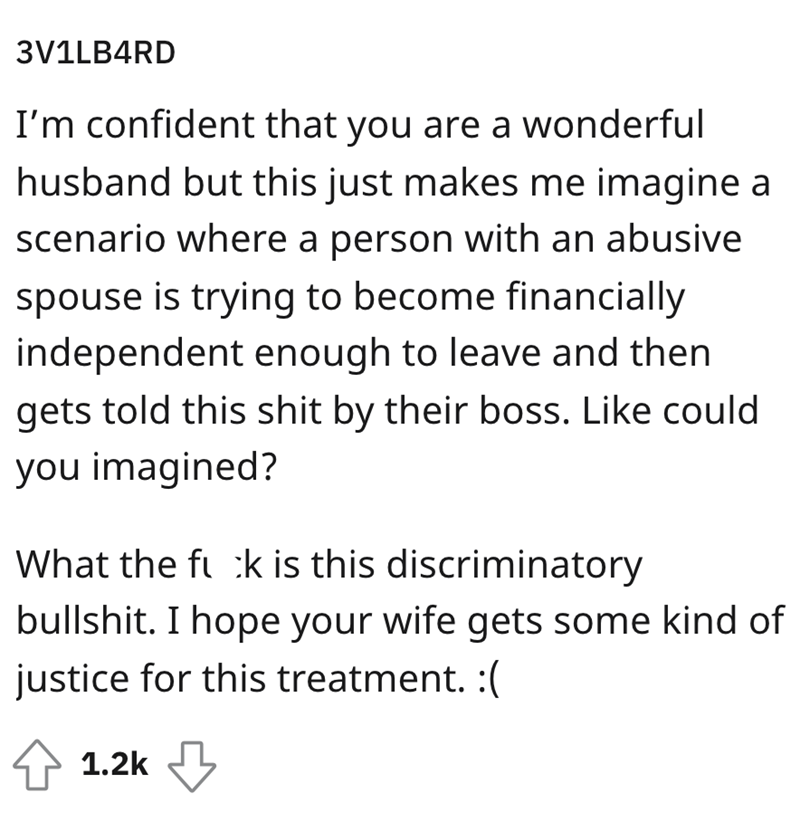 I don’t know much about the law but even I know that this is illegal. 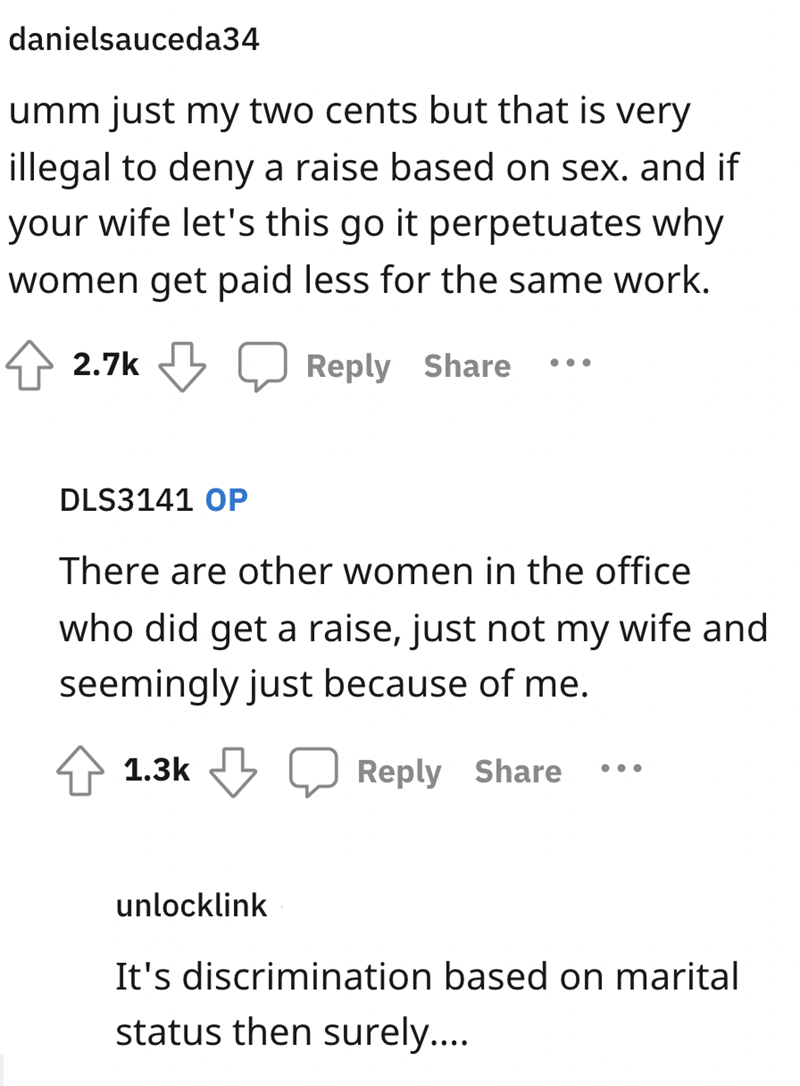 What are your thoughts on this whole scenario? have you ever come across something similar at your job? If you have, what did you do? And how do you think she should deal with this? Comment down below to let us know and don’t forget to share this story with your friends so they can share their opinion as well.