You must be well aware of this stereotype by now.

Karens are the cancer of this world. They are everywhere, ruining people’s lives with their entitled behaviour. Who is Karen? She is that typical middle-aged white woman who thinks the whole world owes her something and demands to see the manager at every little inconvenience. The world is not very fond of her right now.

It is bad enough dealing with Karens at work, but imagine being married to someone like that! I don’t know how I would be able to survive that. I would end up either committing homicide or suicide. But there are people who are trying to make their marriage work, and I have to applaud them. I would never be able to fill their place.

These Redditors shared what it’s like to be married to a “Karen” or “Kevin” and the stories will just make you feel bad for them. Read their stories below:

1. Divorce is the only answer.

2. They don’t ever find anything good enough. 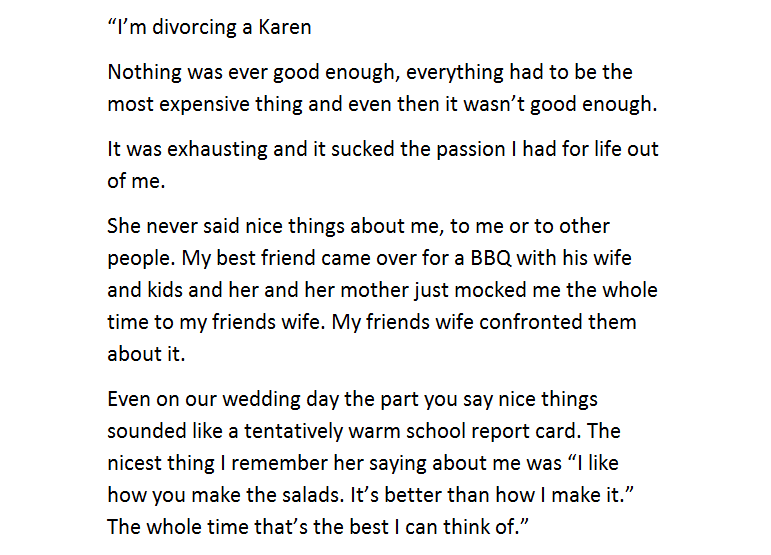 3. I guess if you want something to work, it’ll work. 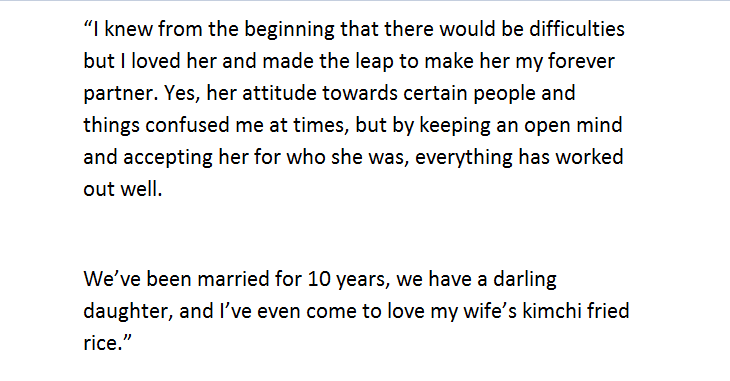 “My ex wife is a Karen, in every sense but name. It was always so embarrassing. She was incapable of treating anyone like a human for the most trivial of occurrences. It was hell for me, as a person that’s pretty forgiving and don’t seek out confrontation.

So in a one word description it was Hell. Lol.”

5. Imagine waking up next to a Karen, man. 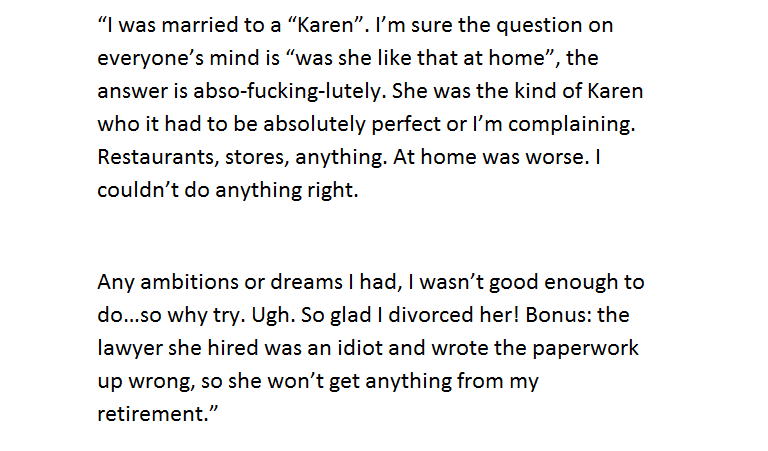 6. Don’t they have anything better to do in life?

There are male Karens too. We call them Kevins. Half of these people are in abusive relationships. Why does that not come off as a surprise to me? I would rather be married to Godzilla. Karens have been around for quite a while, but now they finally have an official name! Congratulations, Karen!

7. Some people enjoy this lifestyle.

“I know a guy who’s married to a Karen named Karen. Every part of their family’s life is perfectly scheduled. Right from the homework to the dinners. I think the bathroom schedule has been out of whack recently.

I think it’s a win-win situation for him since his life is perfectly organised with minimal effort on his part and when someone crosses a line and annoys him his wife will destroy them with her passive aggressive comments and he still doesn’t have to raise a finger!”

“Was married to a male Karen.

Everything, and I mean everything, could set him off.

We were at a local taproom and his iPhone automatically connected to the Wifi. Keep in mind, he had full bars on our cell service. The WiFi was being wonky and wasn’t working. The manager, super nice guy, comes over and asks how we are doing, while he washes some glasses in the dish pit on the other side of the bar.

The following conversation ensues, keep in mind, my husband is super irritated at this made up problem because our cell service is working just fine and he can literally just turn off the WiFi:

Husband: Your WiFi is f*cking trash.

Manager: I’m sorry. We recently upgraded our internet, and Cox is sending us a new modem. It’s supposed to be here this week.

Husband: If you say you have WiFi, you should make sure it actually works.

Manager:  I know. I’m sorry. I’d be happy to restart the modem to see if that helps.

Husband then ignores him and continues to talk under his breath about a made up issue.

This was my life for almost five years. The sense of entitlement was frustrating enough in public, but more so at home. I had apologized to more servers, retail workers, neighbors, and random people in public for him in five years than the rest of my life outside of him.

You know what, now that I’m talking about it, maybe he’s not so much a male Karen. He’s more like a piece of sh^t.” 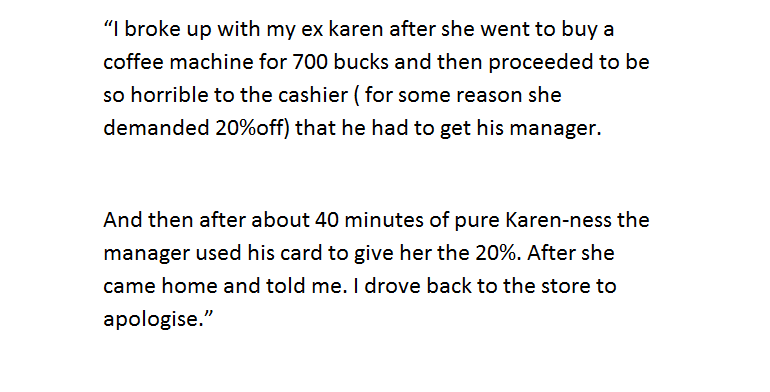 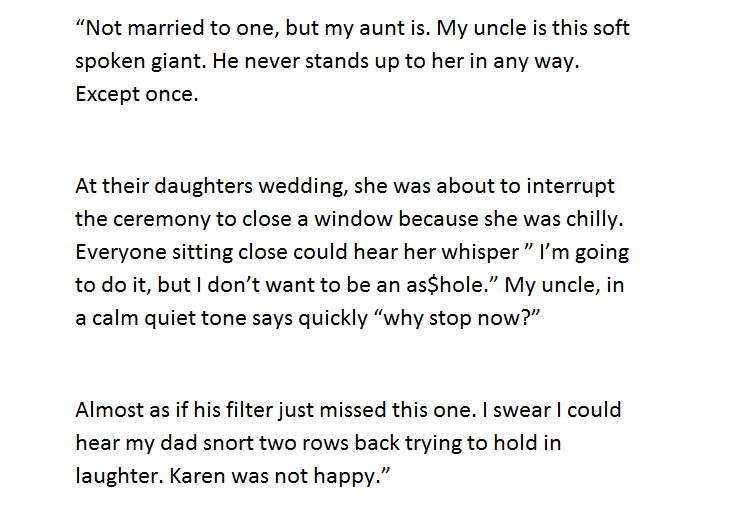 “Not married. 4 years of a toxic relationship though. I broke up with her on Monday, again. We’re kinda f*cked financially because of this lockdown so we are just feeling things out for a month before we decide for sure. This cycle is on repeat.

I constantly have to cut her off and speak over her because of the way she treats people. Waiters, sales assistants, gym staff, neighbours , landlords, randoms we meet in bars etc.

Note: we were both waiters at the beginning of our relationship so she has worked in the industry, but still lacks empathy. She blames the waiter if something is out of stock etc.

My second major issue. We are both English second language teachers. She teaches kindergarten, while I teach high school. Now that we are working from home I hear how she speaks to her students and it’s really opened up another aspect of her personality that I don’t like.

She will berate a student for not understanding instead of evaluating her ability to explain. sh^tting on 3 year olds in their second language doesn’t fly with me.

A lot of her behaviour stems from a self defence mechanism due to insecurity, but that’s not an excuse. She doesn’t realise how mean she is to people, including myself.

I’m a people pleaser that would rather sacrifice my own comfort than someone else’s. She expects me to be an as$hole to people because I’m a biggish guy with tattoos, I don’t exactly look soft. It’s toxic as hell, please help.

13. Even the military can’t handle the wrath of a Karen.

“I was married to Karen, and it was absolutely embarrassing and cost me many good friendships. I was in the military and she would continually cause drama with the other wives, wear my rank on her sleeve, and was the first person to judge.

She always had the attitude that she was better than everyone (still does from what I’ve heard) and flip out on servers and I would have to straight-up have to sneak tip them.

Well after a few different duty stations and a lot of burnt friendships I was getting tired of it and I would look forward to going on my deployments to Iraq and Afghanistan. On my last one, she decides to cheat on me with my “Best Friend” (Gotta love it) and I am immediately told about it, I’m not sure if it was because I was well-liked or she was well hated.

Anyway, this was my THANK GOD moment I can be the first one in my family to get a divorce and not get judged too hard for it and end 10 years of absolute misery. S

o, fast forward to today, my ex-best friend (thanks for the solid dude, lol) and my ex-wife ended up getting married. But if there is one thing you don’t do its cheat on your deployed husband, this is very poorly looked upon EVERYONE in the military and you’ll be excommunicated by the community and the other is start a marriage based on cheating.

So, from what I heard (not that I really give a sh^t) is that she is divorcing him for cheating on him and she is no longer allowed to be on the post for shacking up with another married dude while his wife was deployed. The circle of shame continues!”

Are you married to a Karen? Or do you know someone who is? Share your stories with us in the comments below.