Many people are grossed out by ordinary bodily functions even in this day and age.

One would think we as a society have progressed much further than being embarrassed or grossed out by these sorts of things but stories like these reaffirm the fact that we have a long way to go. You would assume that most people throw their used pads in the garbage but apparently, this woman doesn’t find that okay. She actually got angry at the fact that her son might see the pads even though the bin has a lid on it.

And even if he does come to see it somehow, is it really that big of a deal? Who would even stare at their garbage to make out what is in it anyway? This may seem like an overdramatization of the events but it is the step-mother who made this a bigger issue than it was. While it is true that most people wrap their pads in a wrapper or something before throwing it away, it depends on the individual and there is nothing wrong with disposing of it whichever way you want as long as you are not flushing it down the toilet.

Rather than talking it out with the family, she decided to ban her step-daughter from the bathroom altogether. Yes, I am well aware of how insane that sounds.

AITA For losing it after my wife wanted my daughter to stop using the bathroom in the house? 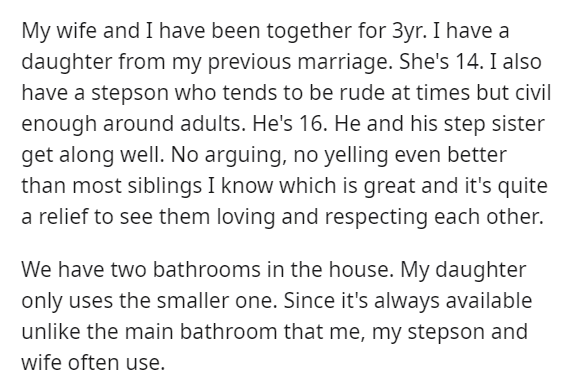 She is the one being ignorant even though she is a woman herself. 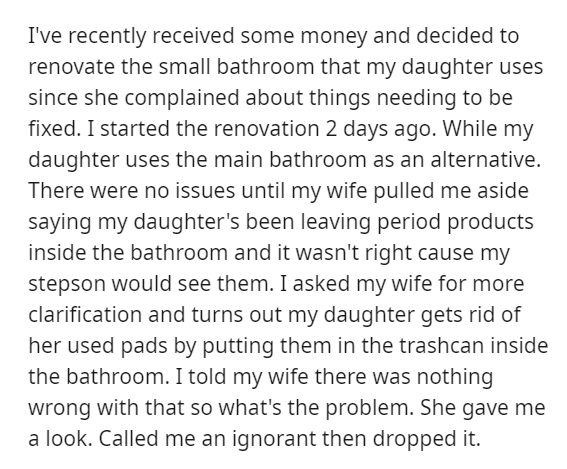 From what is written here, it is clear the son hasn’t once talked about this thing. 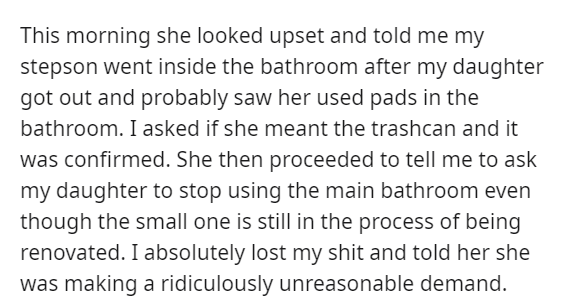 She is the only one making a fuss out of a situation that is not even a big deal. 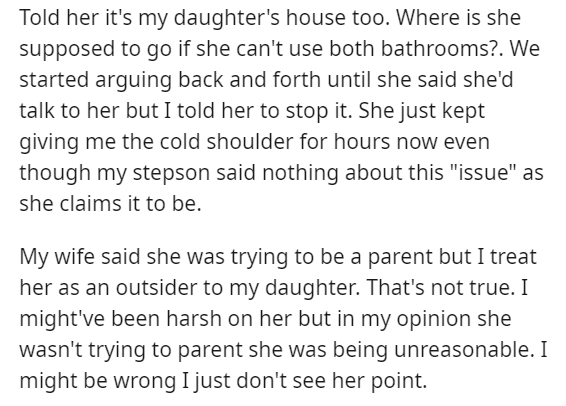 She can accuse him of making her feel like an outsider all she wants but it is her own fault at the end of the day. 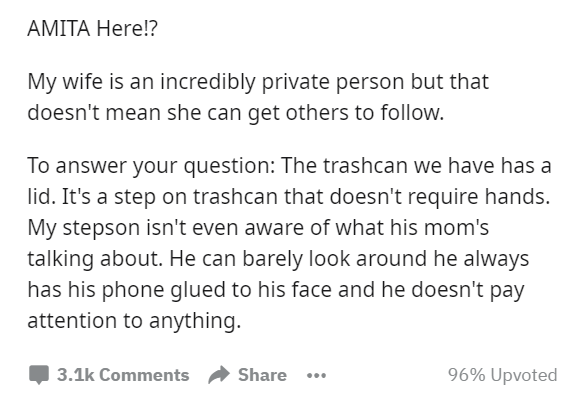 NTA. Why is your wife so frightened about her son learning about the female body functions? And can I just point out that no self-respecting woman would ever waste time on a guy who is either clueless or scared or emotionally disturbed in any way by periods? Honestly, if my husband acted like a baby over this he would never have become my husband.

Your stepson is going to have a lot of trouble in his future relationships if he and your over-sensitive wife can’t get over this ridiculous issue. To be honest I’m that shocked at the stupidity of the ‘problem’ that I am struggling to understand how someone so level-headed like yourself ever ended up with someone so unbelievably narrow-minded. –Little-bit_

The son is being dragged into this unnecessarily. 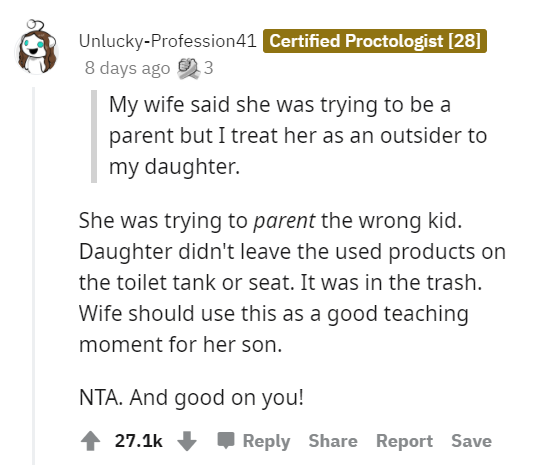 As it is obviously the step-mother who has the problem with it. 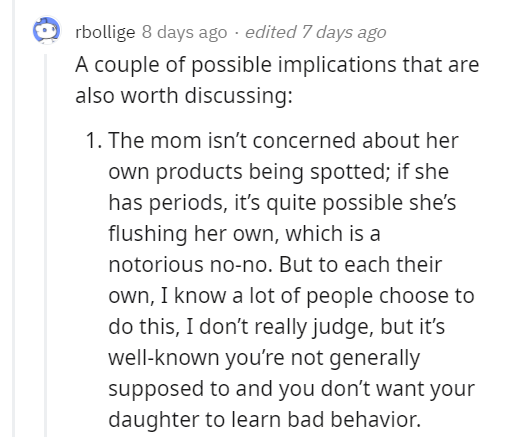 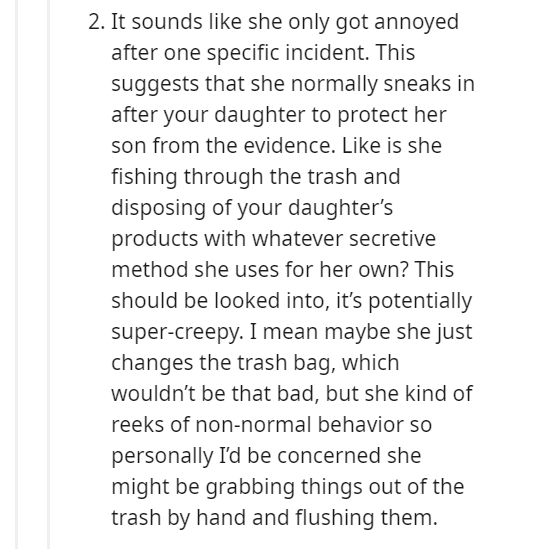 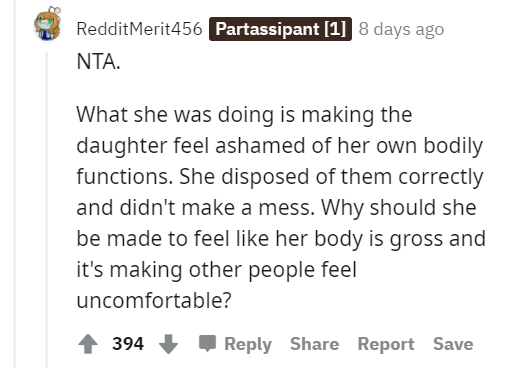 We think society has progressed through this but then we realize we are right back at where we started. 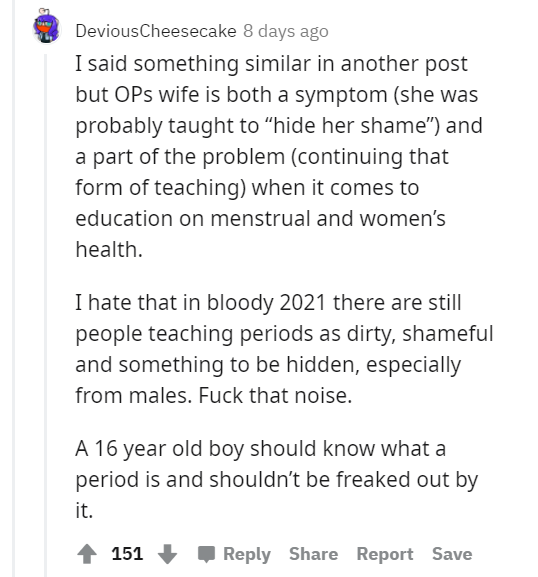 This user isn’t wrong and the husband needs to have a long conversation with his wife to sort this matter out. 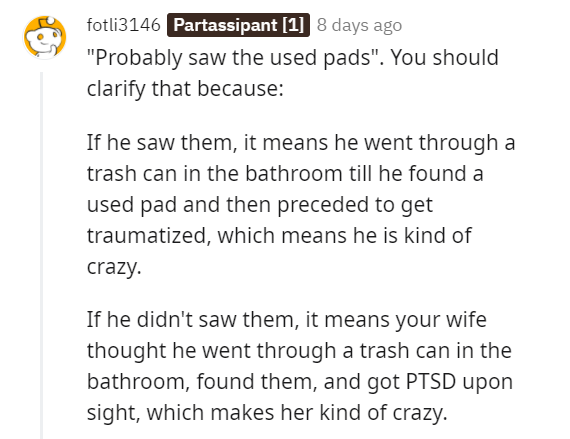 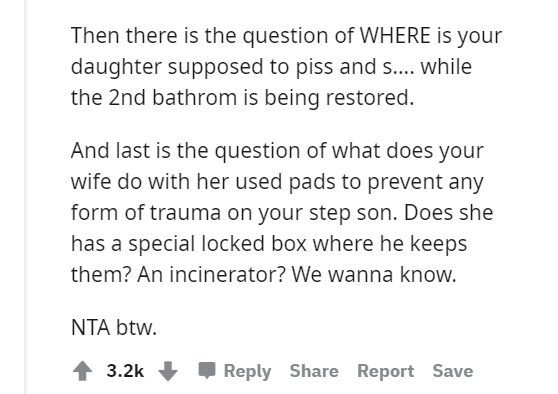 However, she may dispose of her stuff, she can’t force everyone to do the same as well. 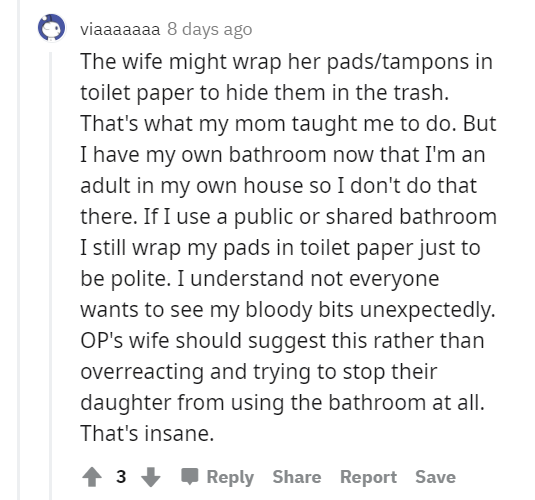 Which bathroom is the daughter supposed to use anyway if not the main one? 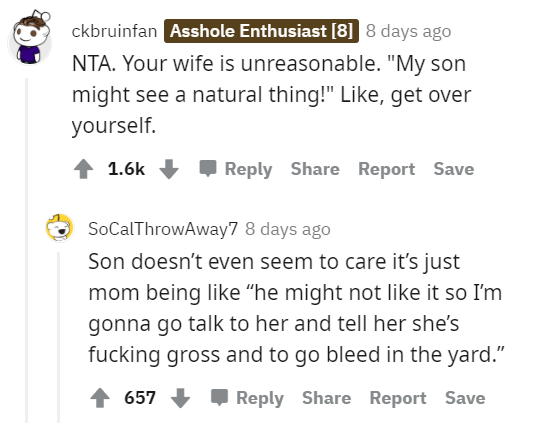 I am absolutely outraged by this. How dare she teach your daughter – someone she is a parental figure to – to be ashamed of the natural functions of her own body. Women are taught from day one to hate themselves, and the only hope we have is to turn to people like our parents to tell us that the world is wrong, not that we are wrong. You are definitely NTA, you’re standing up against not just your wife, but the misogyny and hateful attitudes she is poisoning your house with.

Your daughter deserves better than exile and shame. I hope she grows up strong and unapologetic in spite of this, and I hope she, her daughters, and her daughter’s daughter can use any bathroom they like. –Ilovefrogsx

The family just needs to communicate with each other a bit better and there should be no problem. 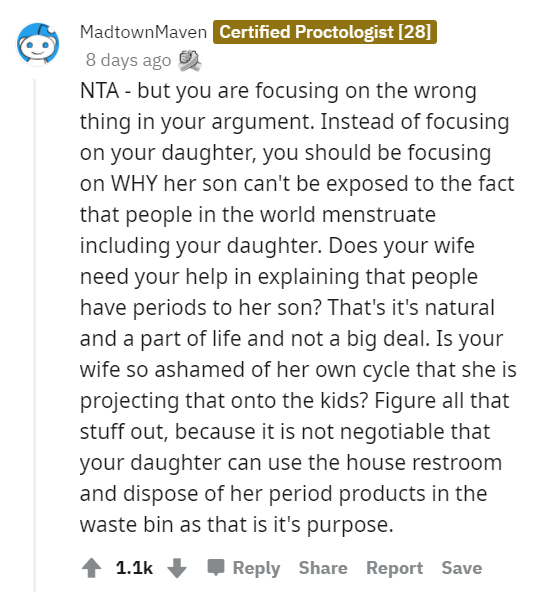 What do you think the reason is behind the wife acting this way? Is she projecting her own shame on her step-daughter? Comment down below and let us know.