Cheating is never okay in any scenario.

There are a lot of cheaters in the world and I personally have never understood why people do it. I mean isn’t it easier to just break up with your significant other and then you’re free to pursue others as you see fit? From what I have seen, some people like the thrill of going behind their partner’s back and making it so they never get caught. However, this sort of thing usually ends badly and they eventually do get caught no matter how careful they try to be.

And while cheating is wrong and I do not think it is an okay behavior in any situation, it becomes even worse when you involve family members. Honestly, it is truly disgusting to cheat on your partner with their family member whether it be their sister, brother, or anyone related to them. I don’t even understand how all of this starts and I am not putting all the blame on the cheating partner either as the particular family member is also 100% in the wrong.

That is the sort of story we have today. But I have to warn you that this is going to be a wild ride and it does involve themes of sweet revenge. So just scroll below to see for yourself.

This is indeed a very long story but it is definitely worth a thorough read, especially if you like revenge stories. 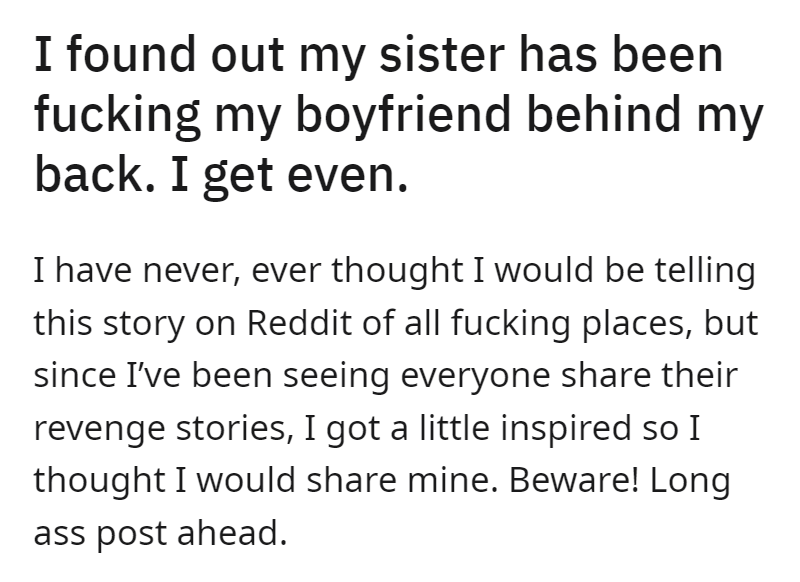 We can already understand that her sister got some bad habits from their Father but they were still a family at the end of the day. 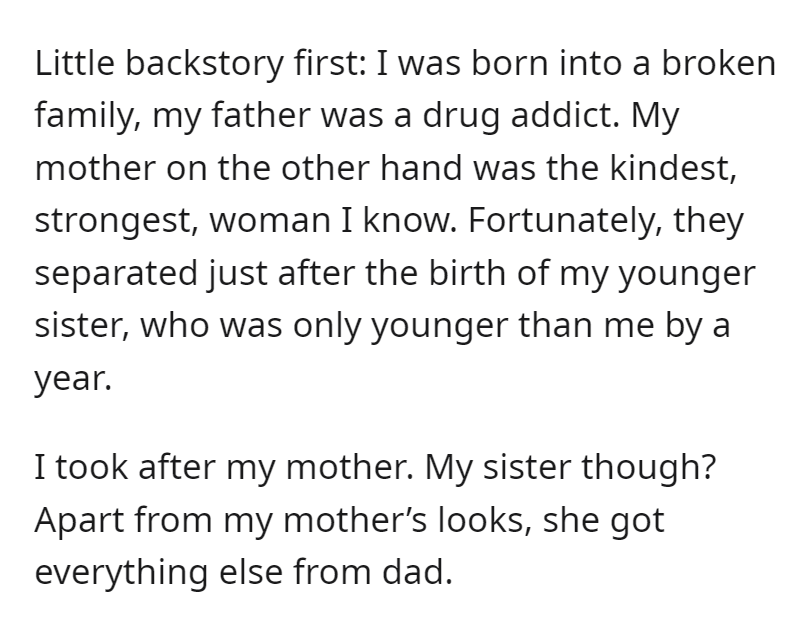 She clearly loves her mother and is inspired by all of her bravery while she despises her father which is understandable. 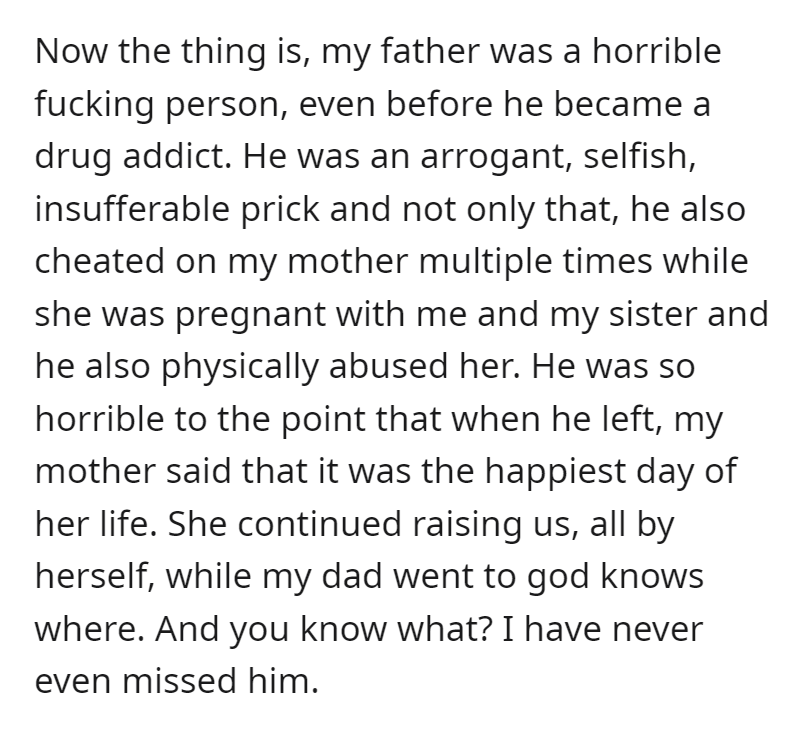 They were never the best of sisters but they were family and that meant they had each others backs, at least that is what she thought. 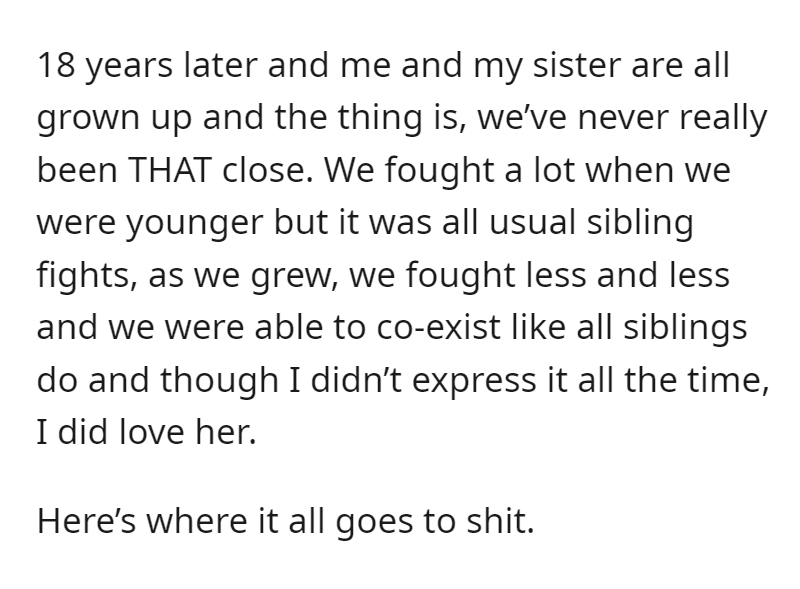 She had started dating a nice guy and things had seemed to be going well for them but something was festering in the background that she didn’t know about. 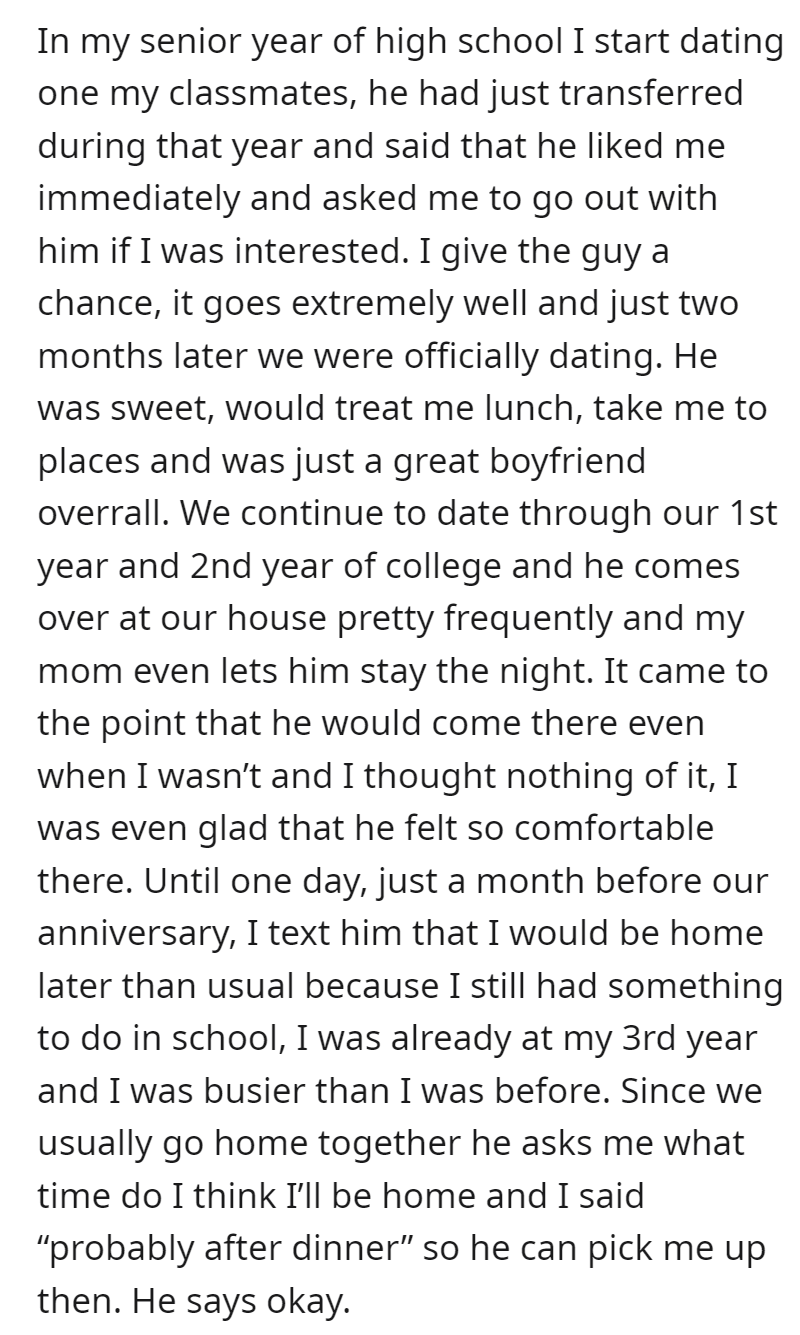 Things didn’t smell right so she went directly to her house rather than texting her boyfriend beforehand. 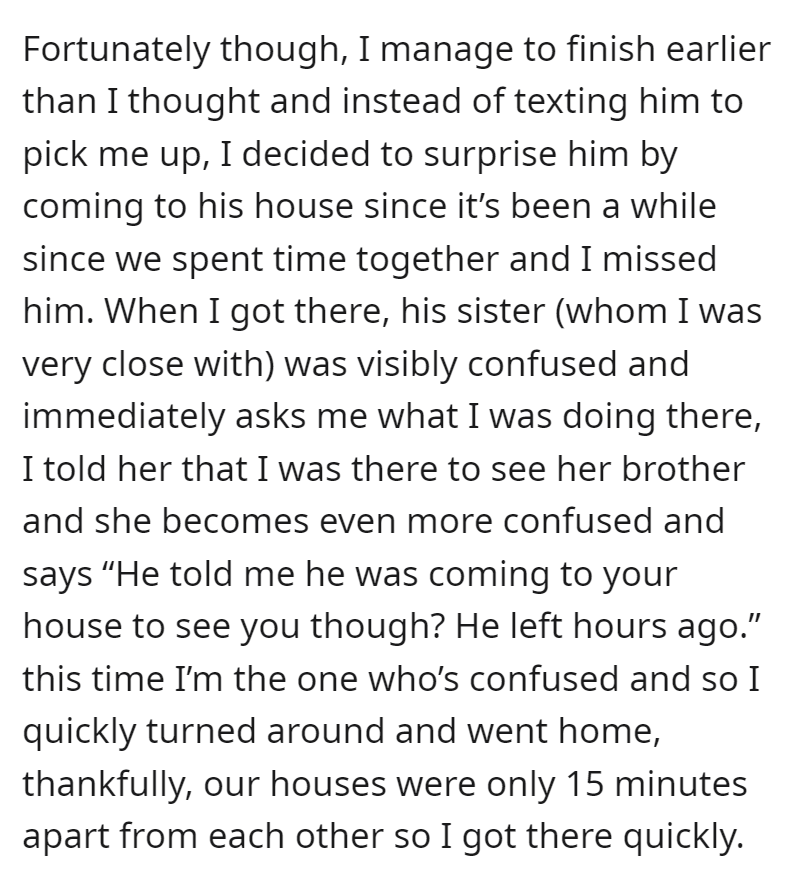 However, things quickly took a turn once she got home and as everything unfolded in front of her.

It is clear that her sister didn’t feel guilty after she had done it. I mean how could the sister let a guy get between their family. It is not only dumb but also incredibly selfish. And she didn’t even have the decency to apologize afterward. Not only that but the boyfriend was also nowhere to be seen afterward and even he didn’t say sorry. It seems like it had been going on for a while and they had just been caught.

The sister didn’t even apologize. 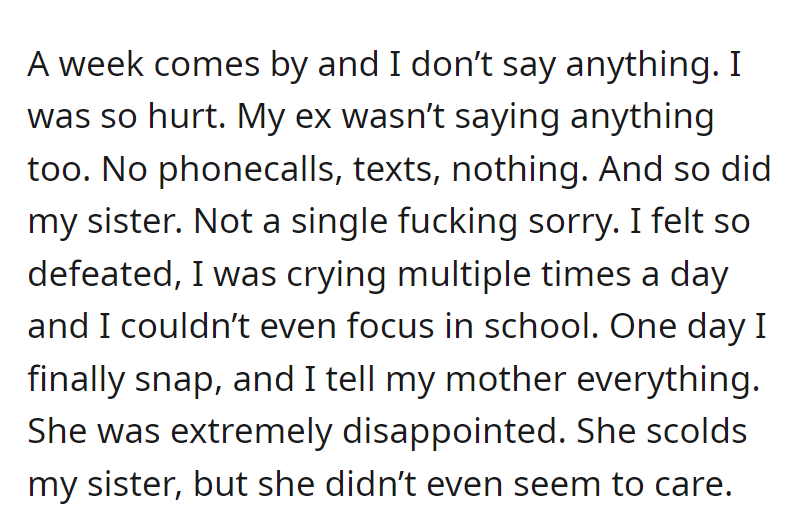 This whole thing had clearly affected her and thus she decided to move away from her ex and her sister.

Things eventually started going well for her and she started working as well. 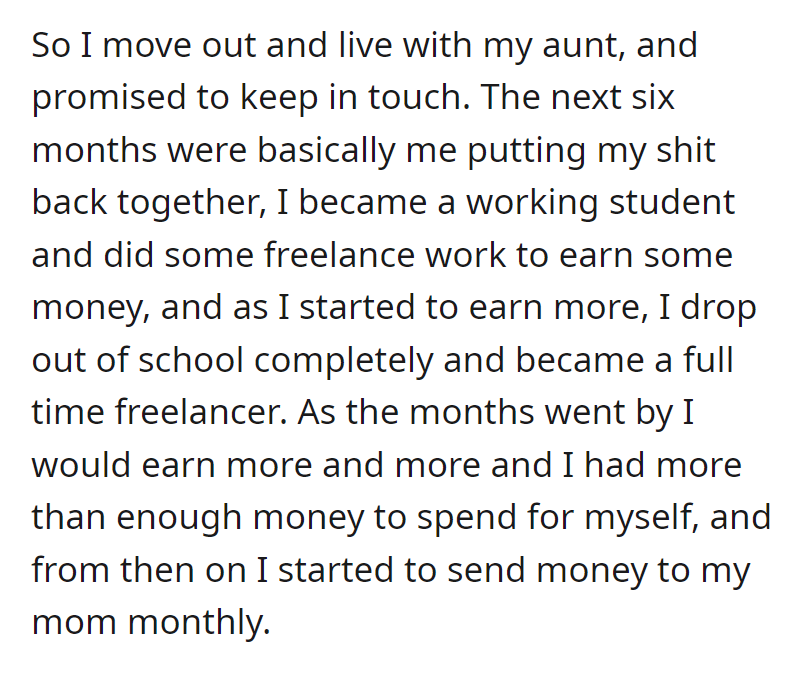 That is when she decided to unblock her sister and her ex and she immediately got sucked back into all the drama. 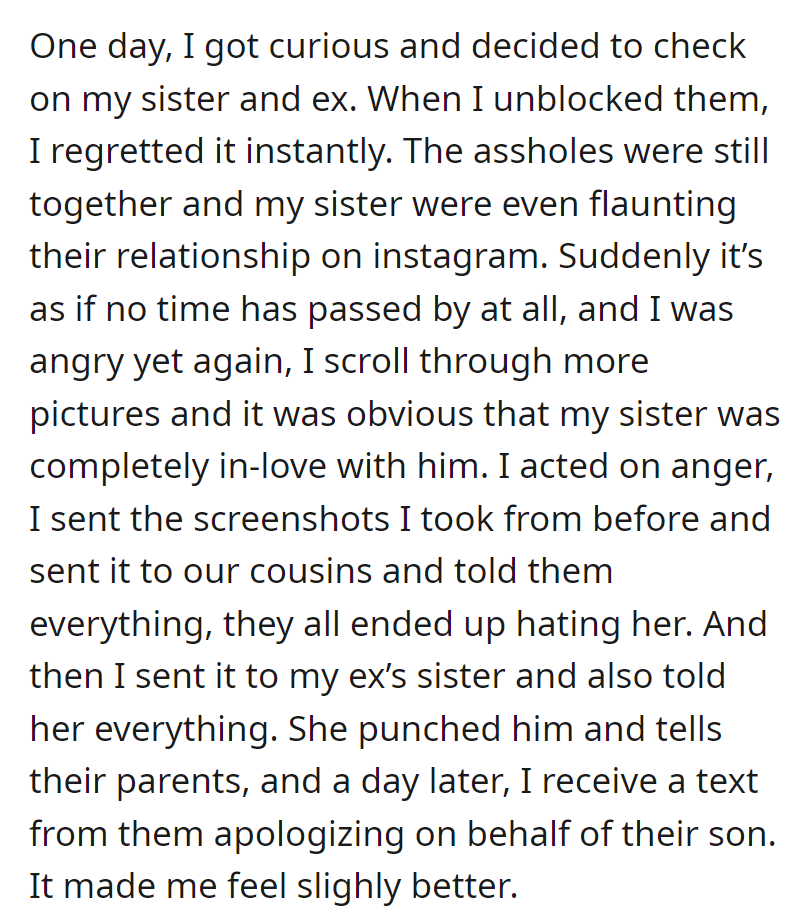 What made all this even funnier is that she caught her ex with another girl that wasn’t her sister. 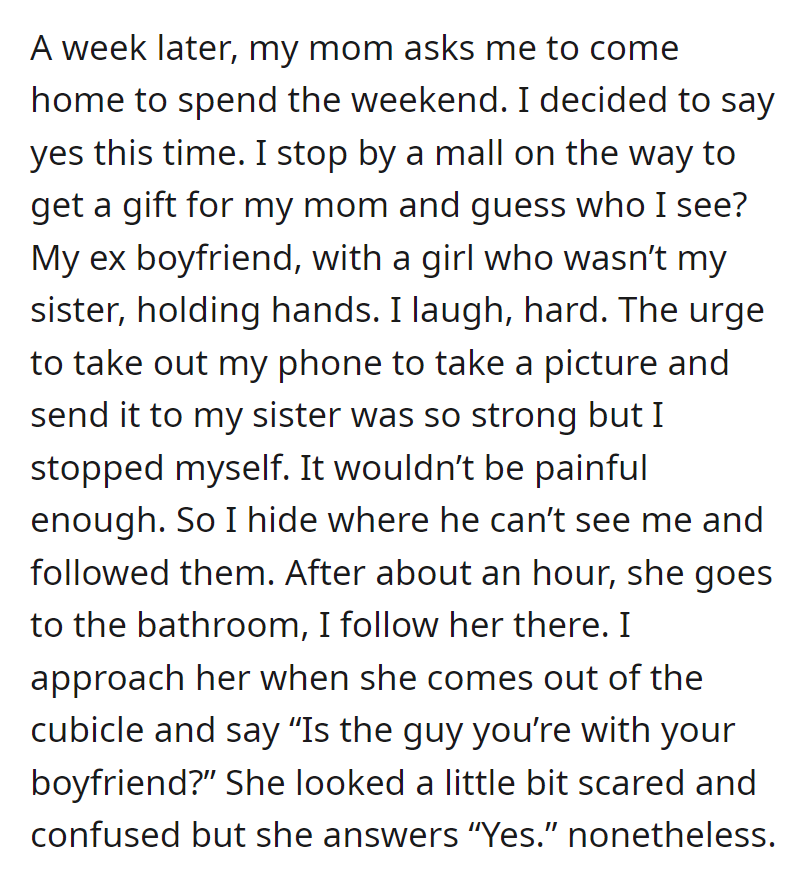 This is when she concocted a plan to get back at them and asked for the help of this new girl. 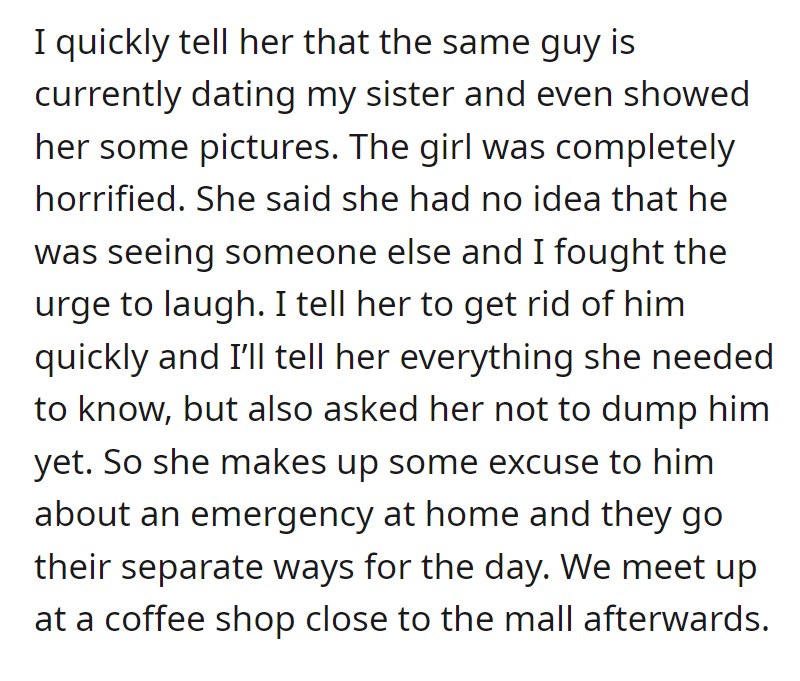 This new girl didn’t like any of this and was on board.

Everything was finally in space and she decides to send everything she had on the day of their anniversary.

It all came out and it is safe to say that the sister wasn’t happy but the ex just ignored her and asked her to leave.

Things didn’t end there as it turned out that she was pregnant. 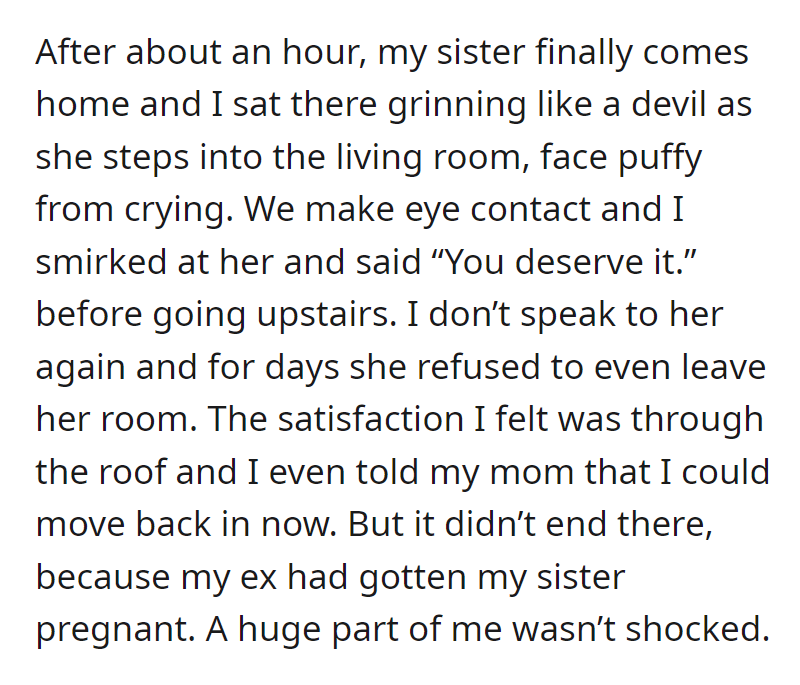 The guy clearly didn’t want her but felt responsible for the child so they let her stay with them. 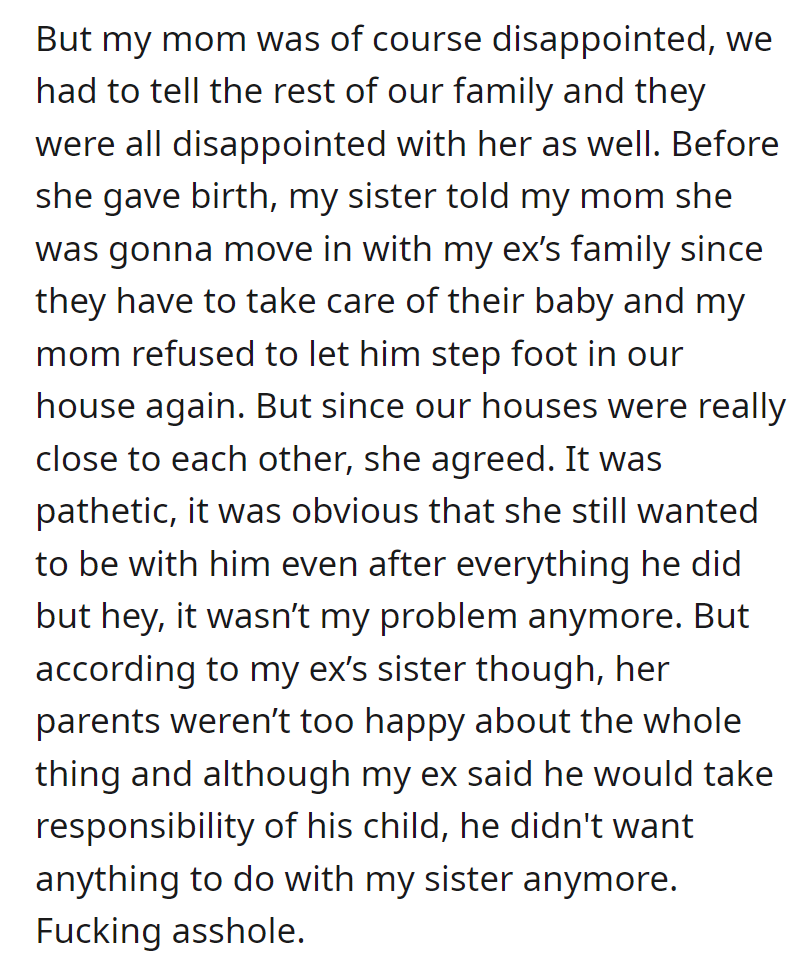 Things don’t seem to be going well for her and she still hasn’t apologized even to this day. 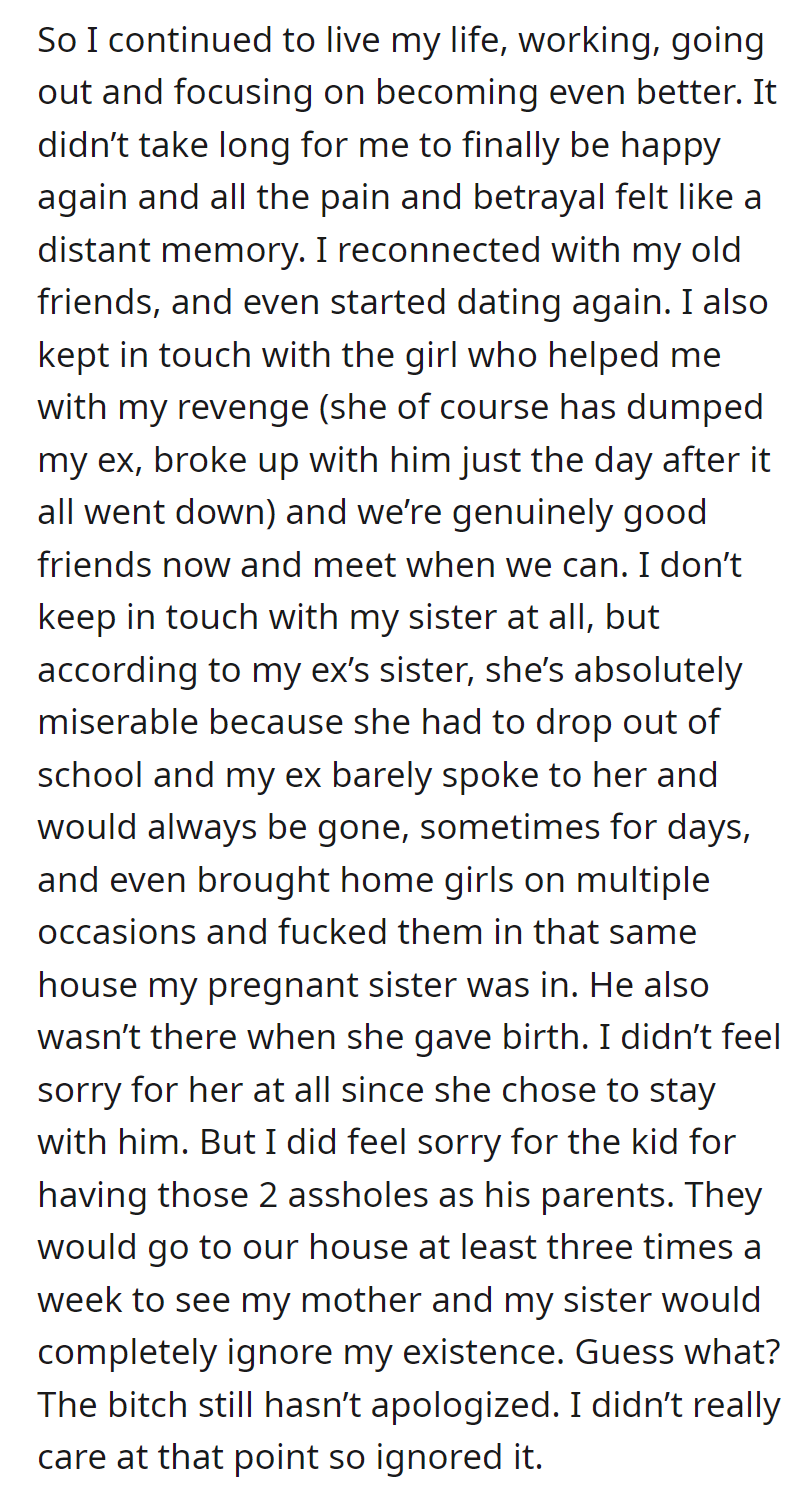 And to just rub salt on the wound, this is what the woman did before blocking her sister.

Nobody in the family likes her and they all know what she did. 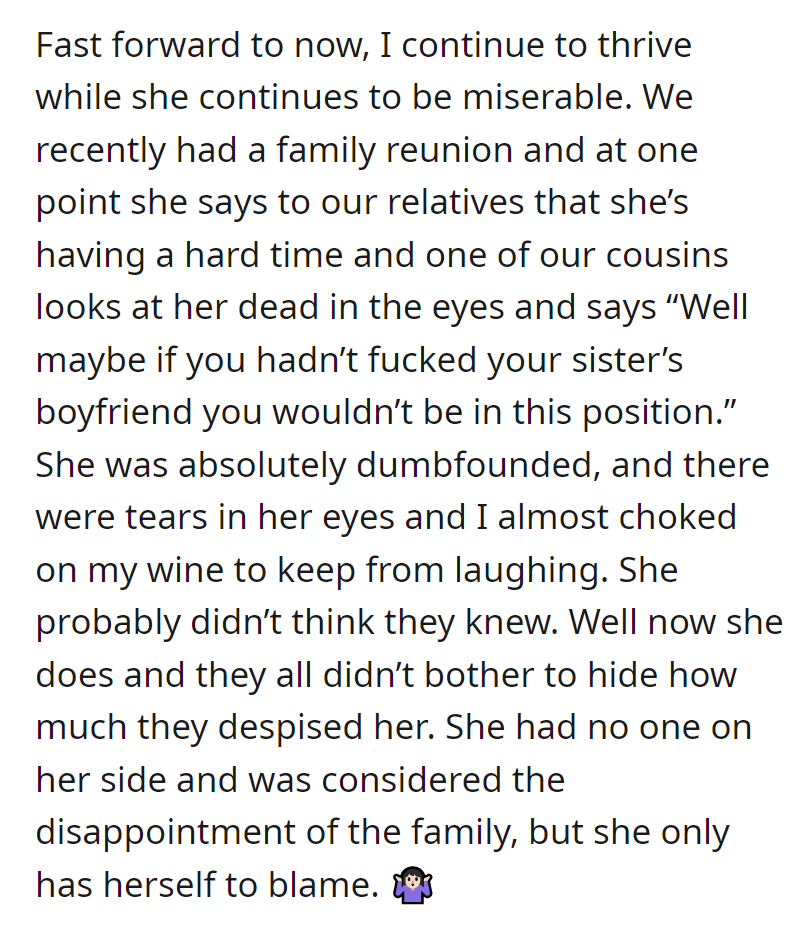 We also get a bit of information as to where this all happened. 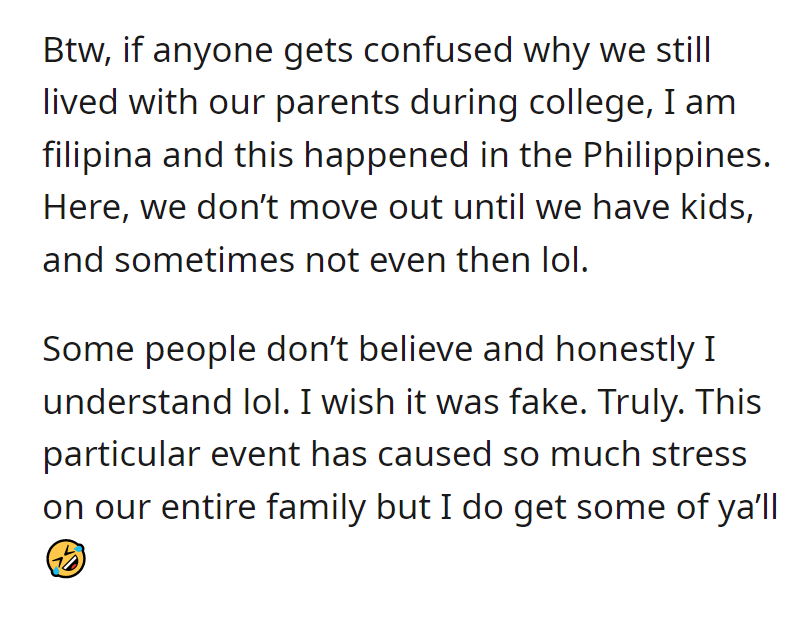 Honestly, sometimes real life is weirder than any fiction out there. 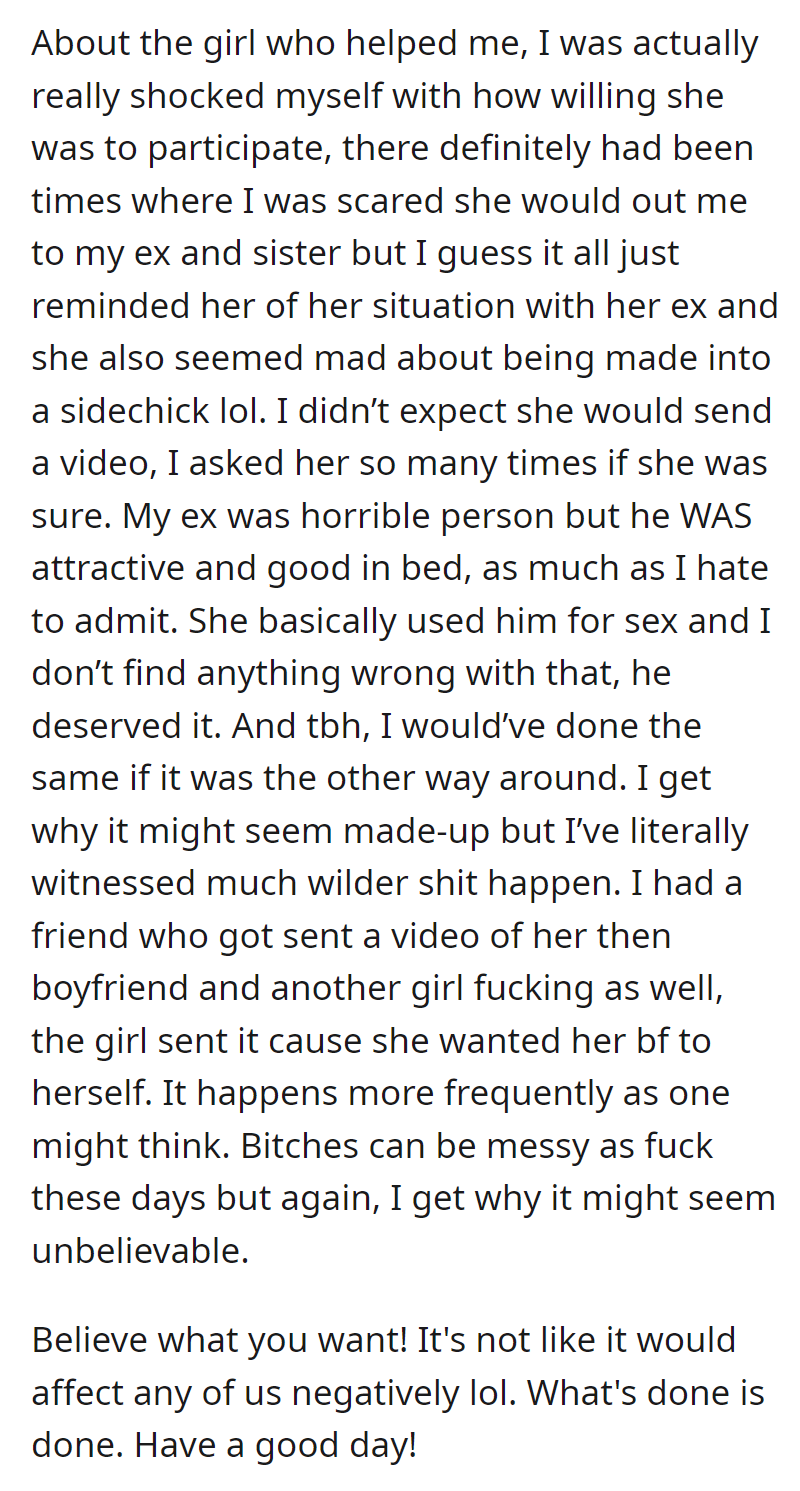