It is never okay to insult servers.

There is this horrid mentality going around where people think that they are better than people who work in the service industry and that is not true. I can never understand why this happens in the first place. I mean everyone is just trying to earn a living so what kind of high horse are these people sitting on to think that insulting servers is a good idea? Also, the idealogy that ‘customer is always right is horribly outdated and doesn’t make any sense these days.

This is exactly the mentality most of the Karens have and thus we end up with a generous amount of Reddit stories where they get called out but never learn their lesson. That is the kind of story we have today. It is about a Karen who left a note on the receipt calling the server an unsavory word for wearing shorts in the summer. I don’t know about you but who wears an overcoat when it is 90 degrees outside? Well, she got what was coming to her when she came back again a few months later.

We start the story off with some much-needed background information on how this all started. 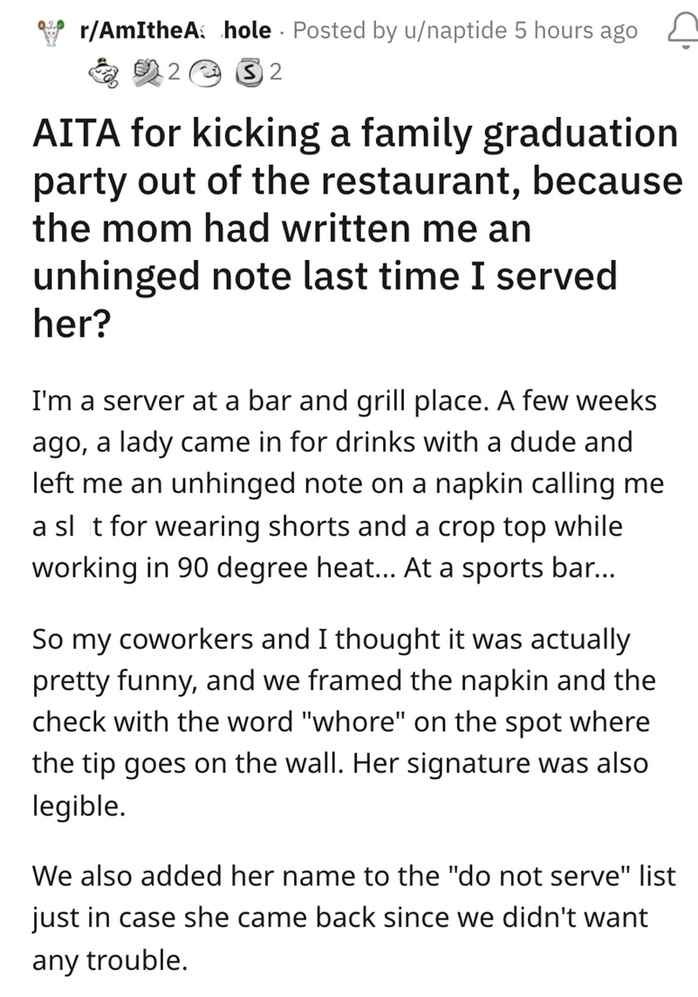 The staff rightly put up the horrid note on the wall to warn all the other servers about this particular client. 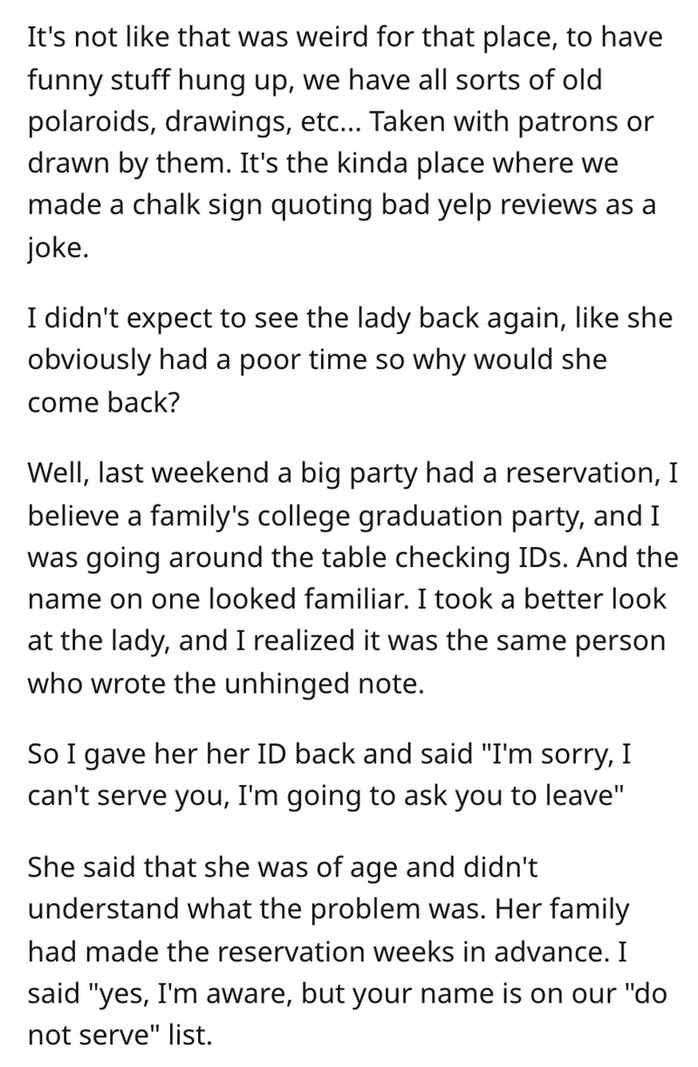 So when she came back, she was still on the do-not-serve list and she unsurprisingly caused a ruckus. 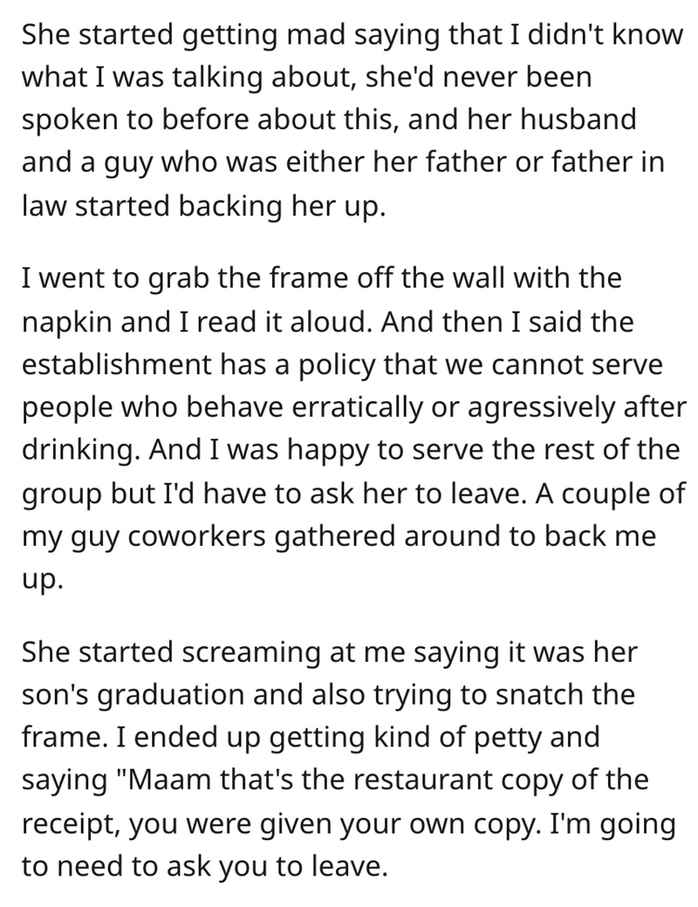 Everyone around her tried to get her to calm down but that didn’t work out so they all left. 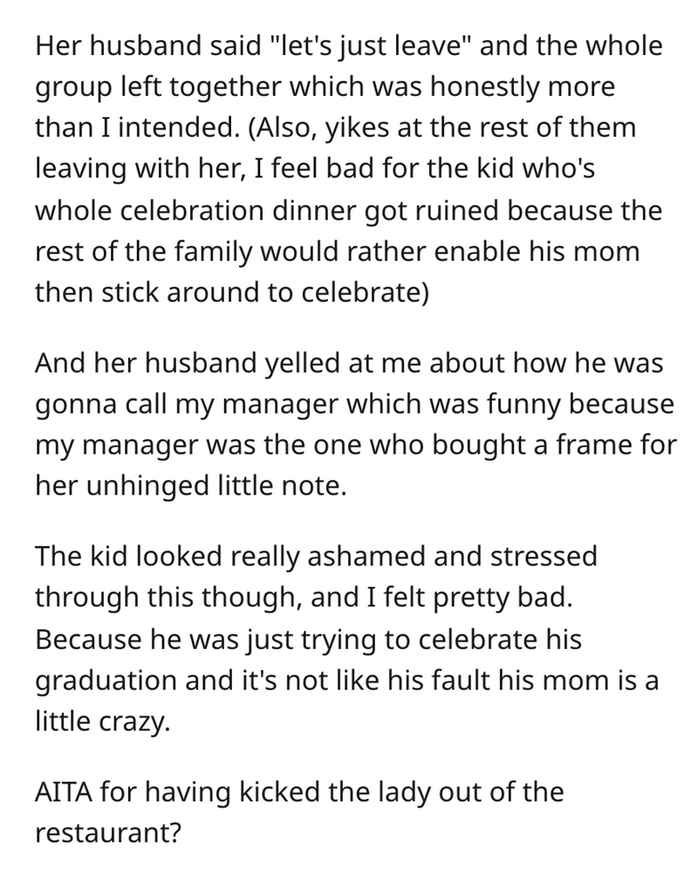 The poster of this story also added a few others things that should come in handy for people who think this behavior is okay. 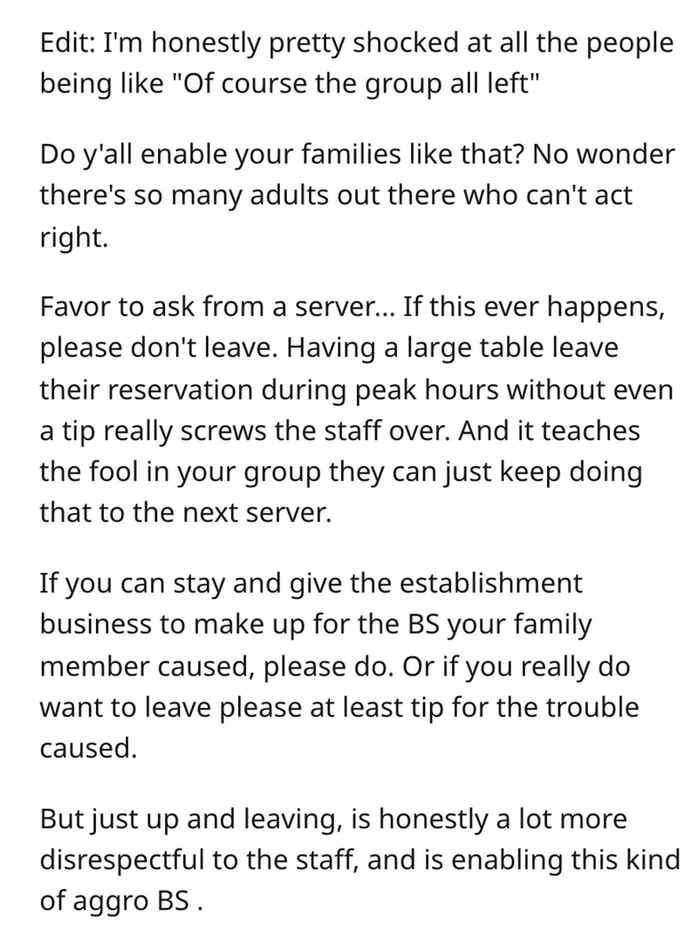 However, we do not know what was happening in their personal life but I hope she learned her lesson. 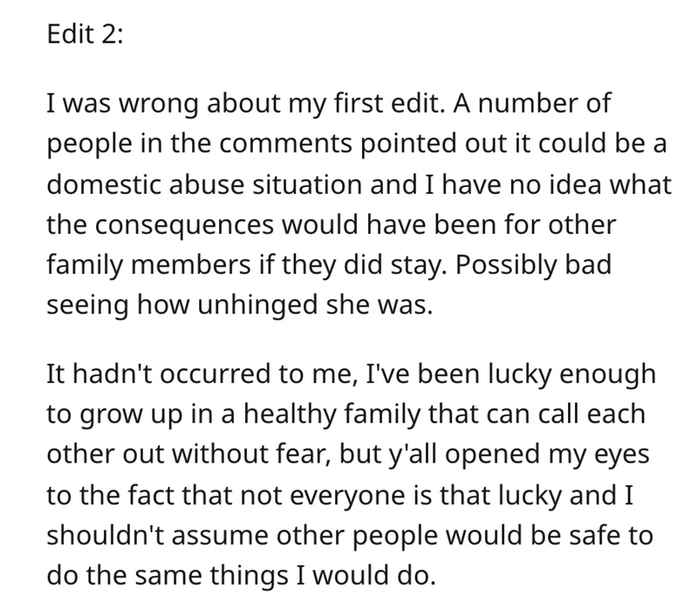 While her behavior is horrible, the one thing that keeps sticking with me is the fact that she came back. Was she so drunk last time that she didn’t even remember writing the note or did she think everyone at the bar would forget? And for her to cause a ruckus and call them out when she is in the wrong is simply hilarious. While it would have been great if her family had abandoned her but at least she might have learned her lesson.

The commenters were obviously on the side of the server. 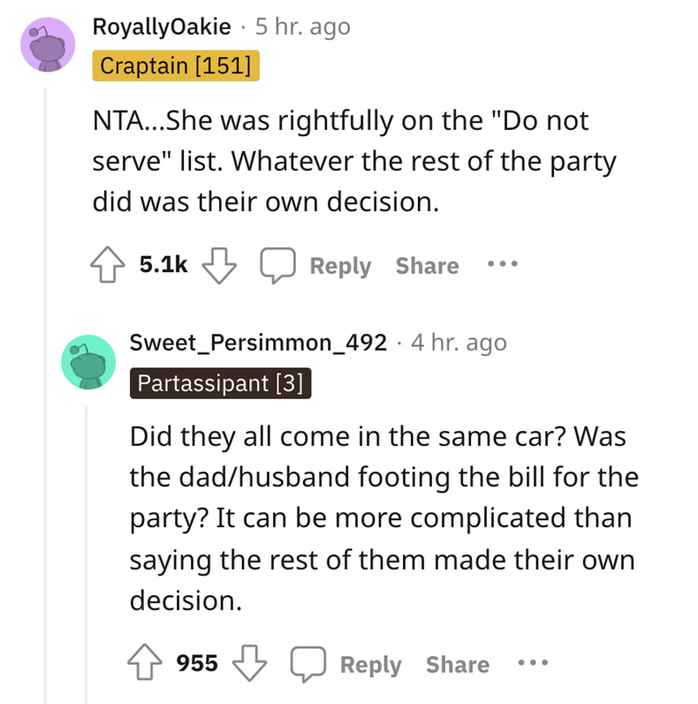 And many others praised the management for sticking up for their employees. 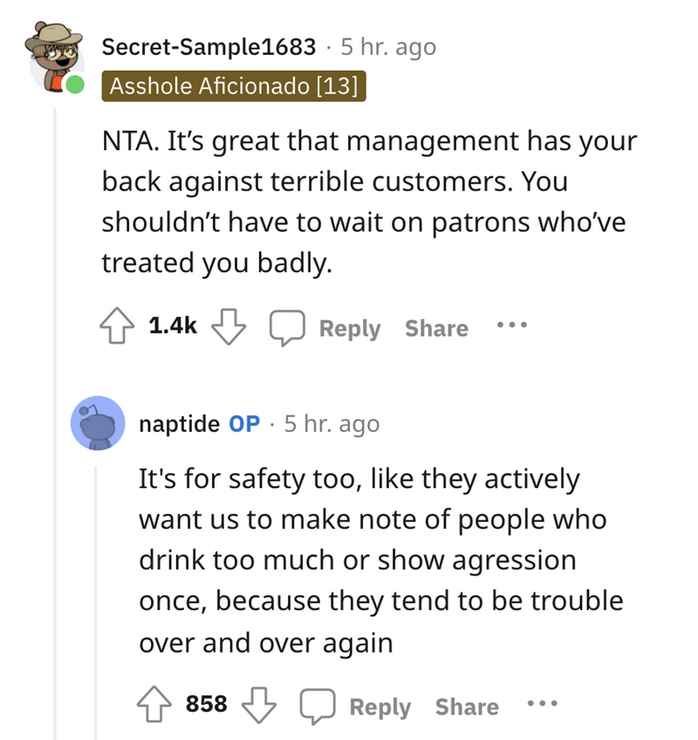 I also feel quite bad for the kid but this kind of behavior should not be rewarded no matter what. 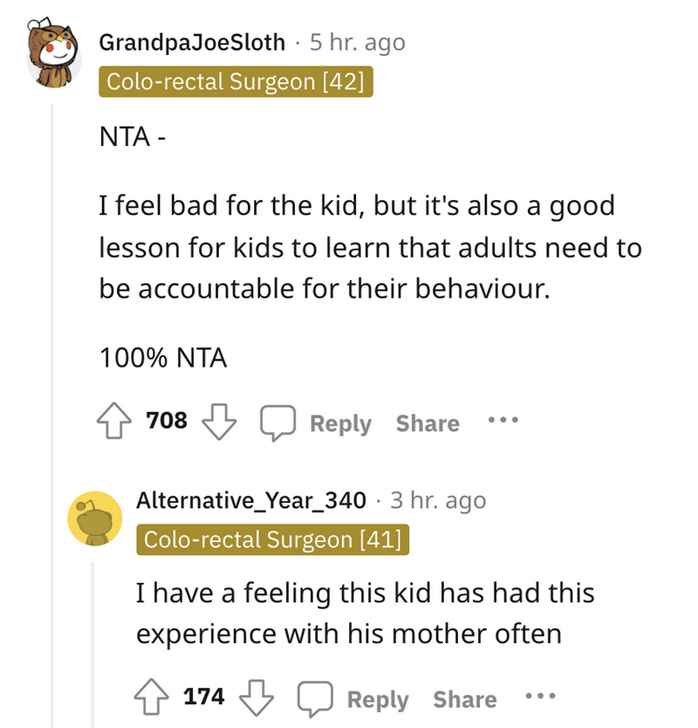 Some Redditors aptly pointed out that she might have been with another person before hence the ruckus. 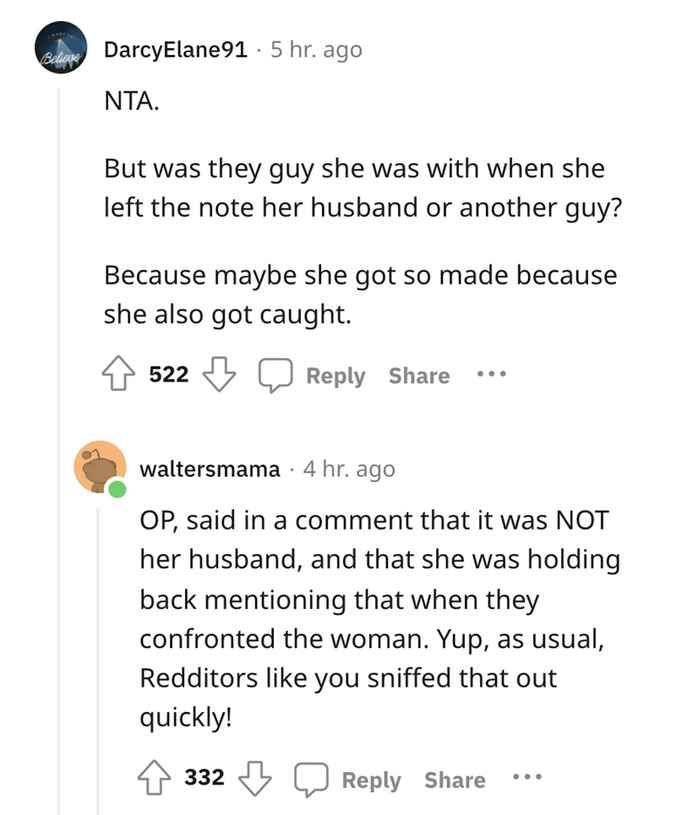 She was afraid of getting caught by her husband.

She tried to impress her ‘date’ and it didn’t work out for her. 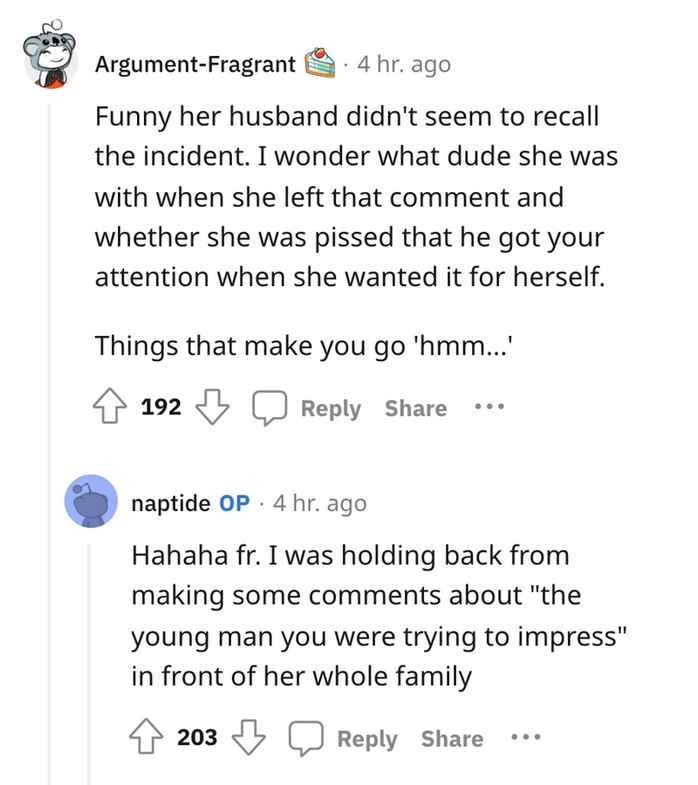 Sadly, most managers don’t care how their employees are treated as long as they serve the customers. 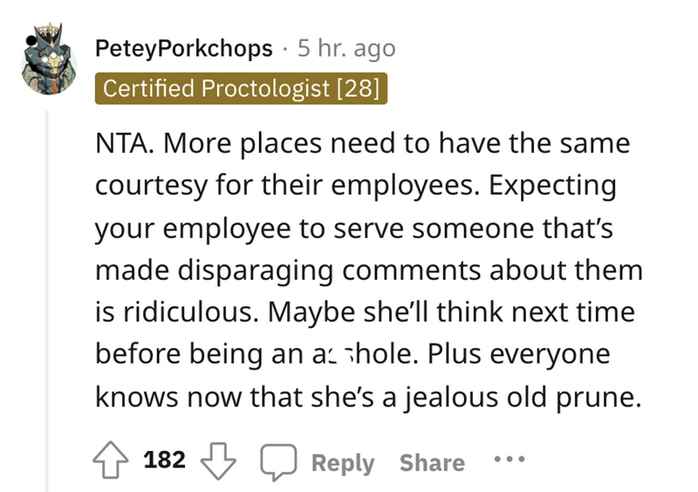 What are your thoughts on this particular instance? have you ever had to deal with a Karen like this one before? If so, what did you do? Did you refuse to serve them or did you let another server handle the table? Let us know in the comments down below and don’t forget to share this story with your friends so they can join in the discussion as well.