One should appreciate their workforce.

The workforce is a sort of an asset in the business as well. For example, if you don’t oil your machinery or take care of it, you will end up losing money by the end. So how is it any different with humans? Isn’t it important to take care of your employees and make sure they are happy and content in the workplace? I am not saying that higher-ups should give in to every demand that an employee makes but sometimes you need to give a bit of leeway.

This is especially true if you have an employee that basically takes care of a lot of things around the business. We all know of that one person that is solely responsible for the business in a way but they don’t get paid enough. That is the sort of person we are going to talk about today. This woman basically had a lot of titles and was in quite an important position but every time she asked for a raise, her boss would decline without a good reason.

I am sure you can guess what happened next but it is always fun to see these higher-ups get a taste of reality. So just scroll below to read the whole story for yourself.

It is clear from the start that she deserved more but her boss was just being an overall jerk. 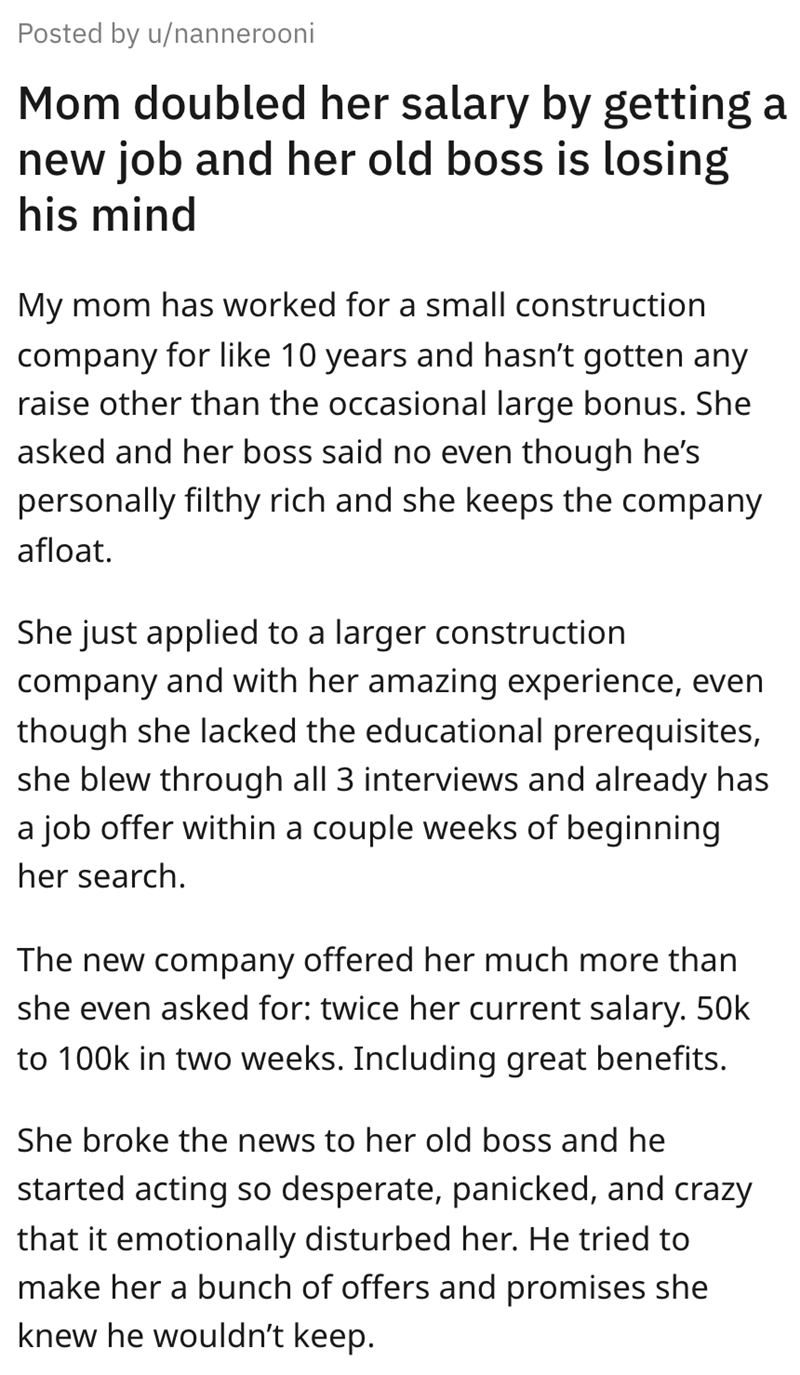 I am glad she left the job in the end even if he offered to pay her more. 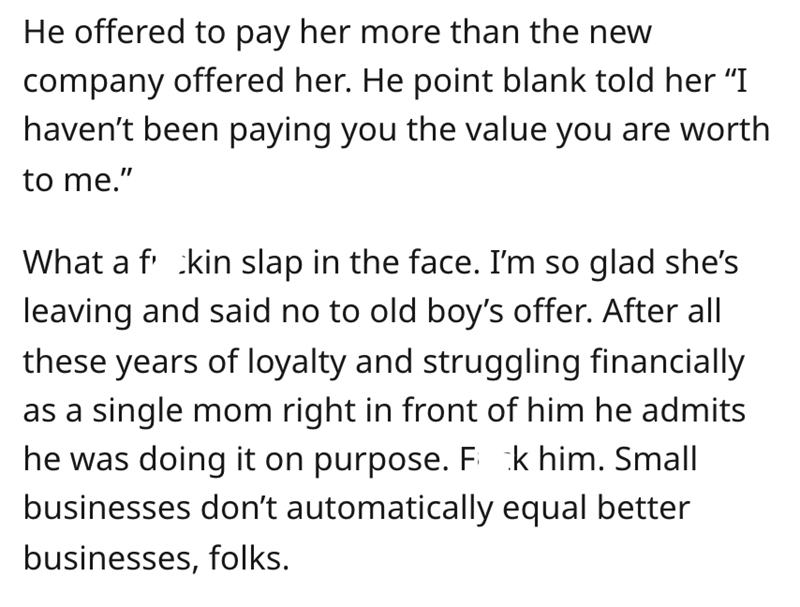 I don’t understand how the boss thought that this behavior was okay. I would understand if they were a small business and he just didn’t have enough money to pay her what she deserved. However, he basically admitted that he wasn’t paying her enough just because he was getting away with it and he thought he could get away with that forever. This just goes to show that you have to stand up for yourself to make sure that you are getting the pay you deserve and are not getting swindled in the end.

people in the comments obviously weren’t on his side at all. 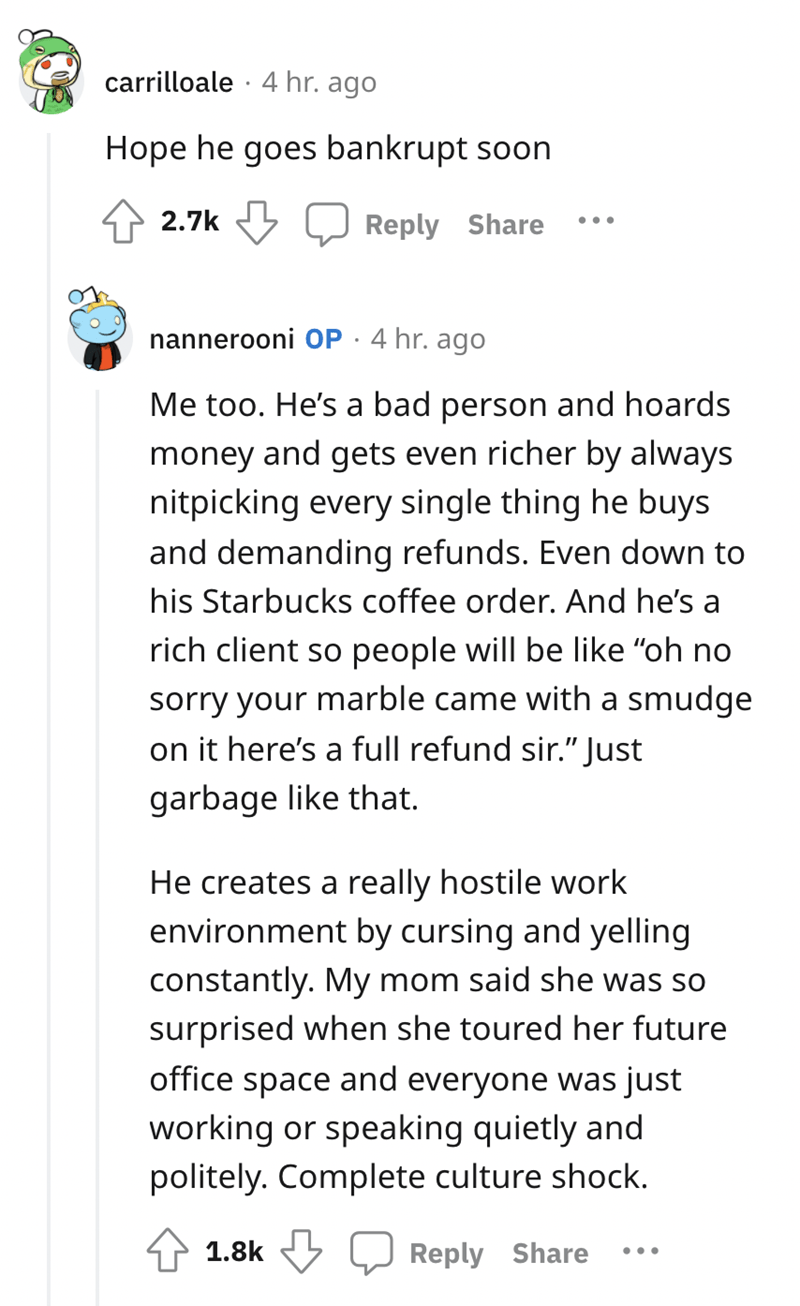 He clearly always had the money, he just didn’t want to pay people who deserved it. 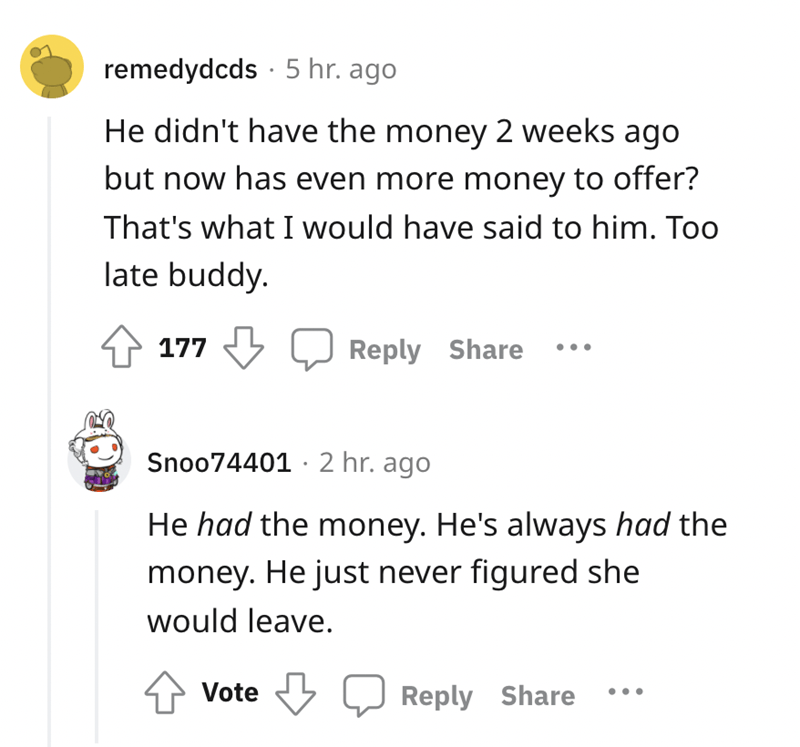 I am glad she found a better job and I hope it goes well for this family. 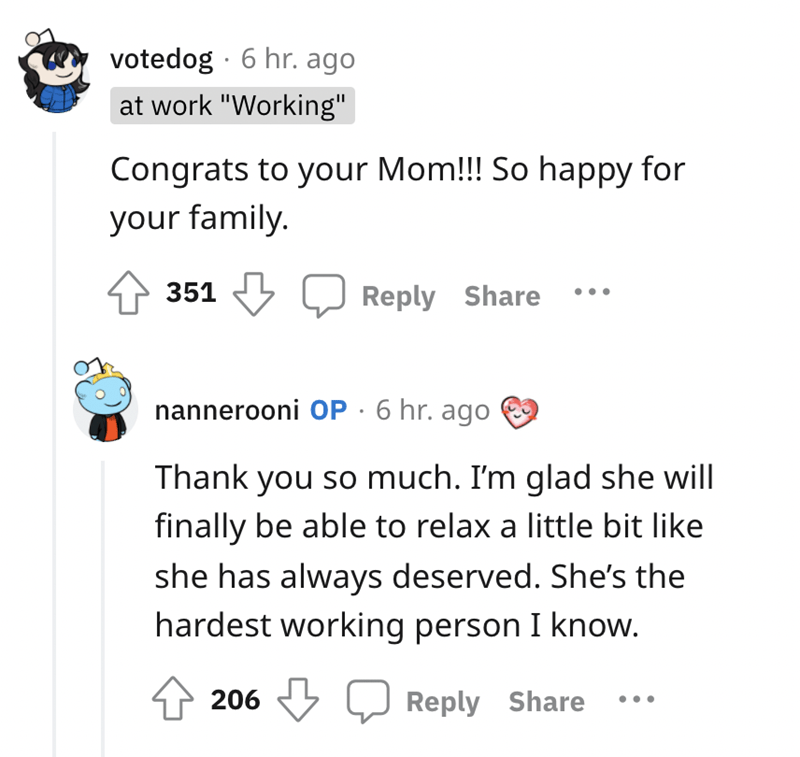 This sort of behavior is not exclusive to higher-ups, some people are just jerks. 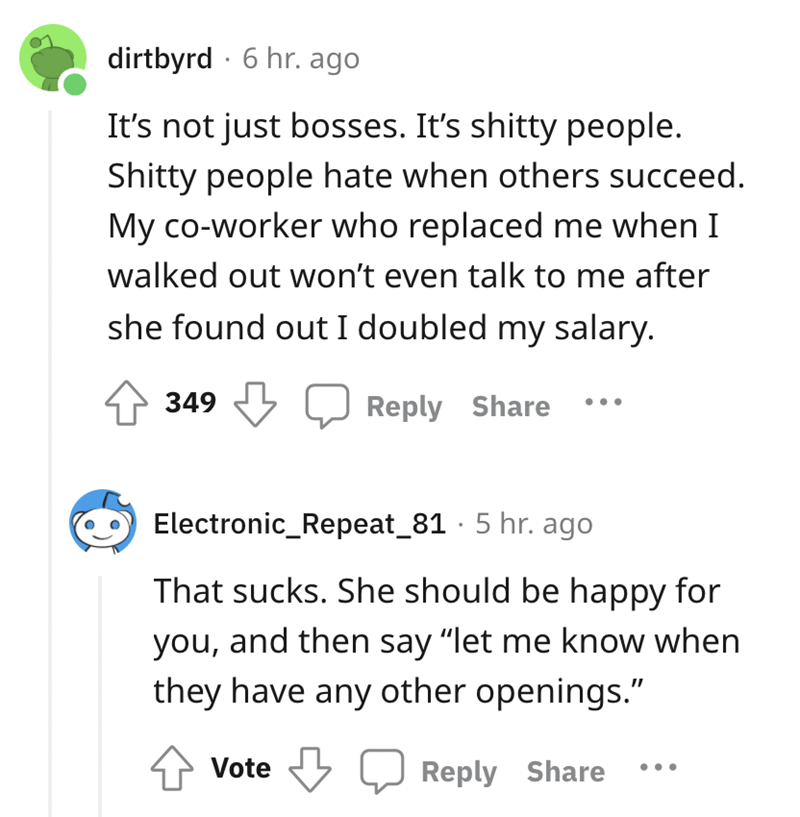 This person tells us their experience and how they ended up staying with extra benefits. 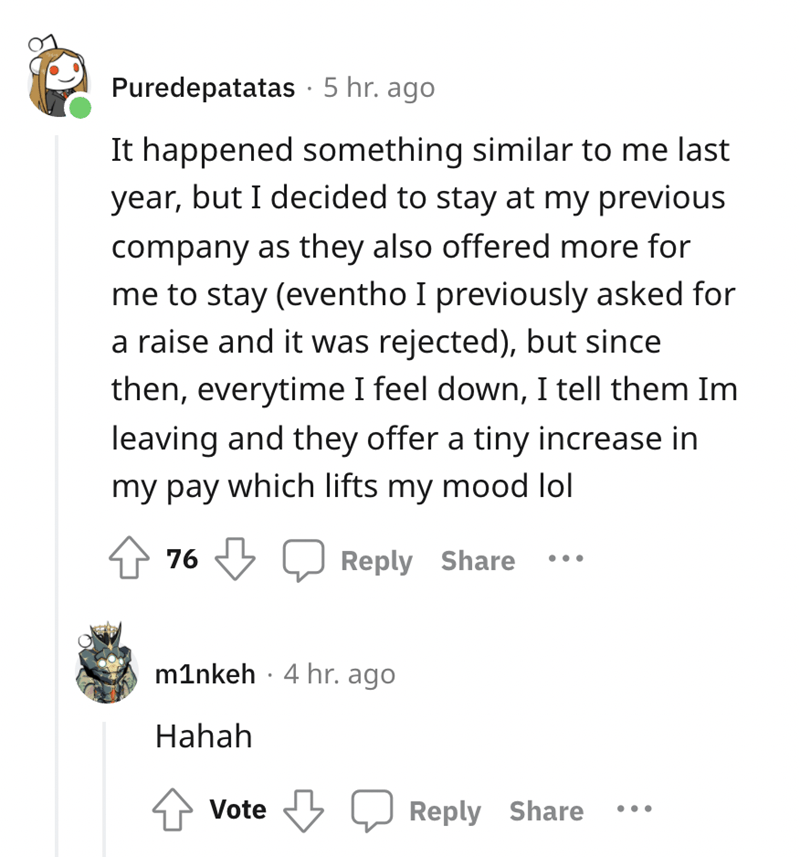 It is actually quite heartwarming as it has a good ending.

He would probably just promise and then go back on his word. 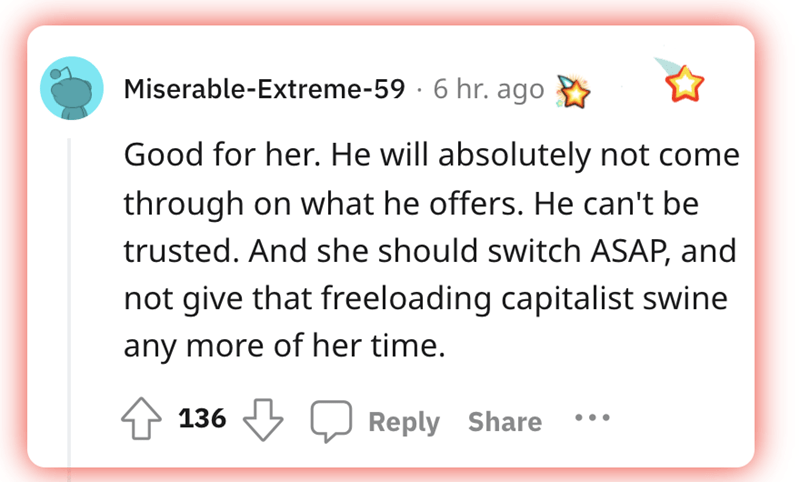 It really is quite sad to read stories like these. 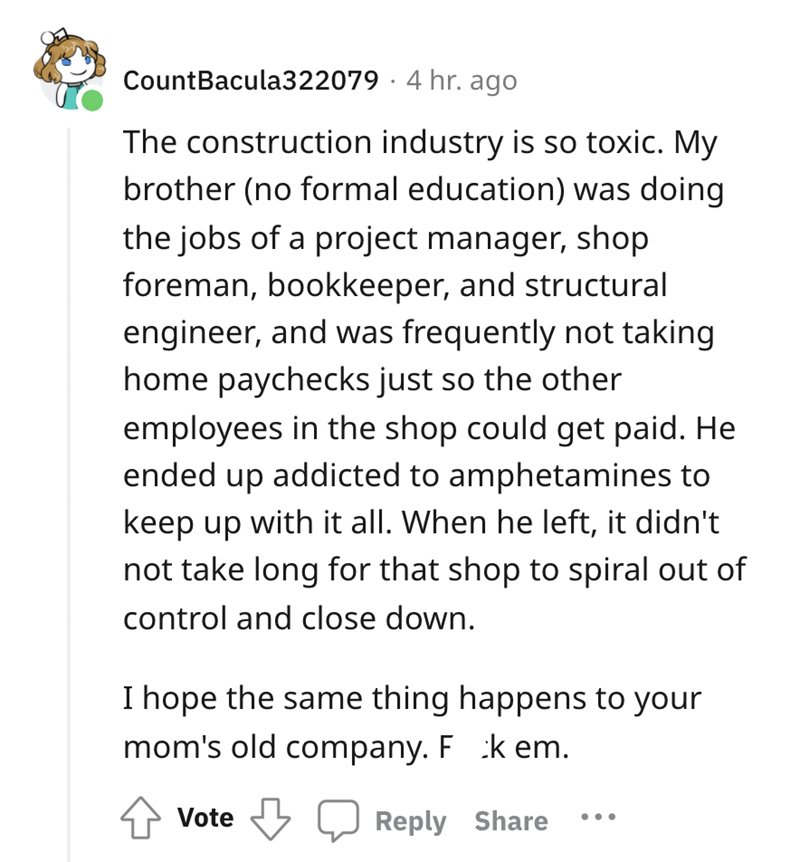 What are your thoughts on this story? Do you think the woman should have accepted the higher pay at her previous job or is it good that she moved on? What would you do in her situation? Comment down below to let us know.