Living in a man’s world, a woman’s life is full of struggle to fight this patriarchal world. Even you put two women of two different generations with vast differences in one room, they would still be able to boil down their life experiences to some commonalities and some similar experiences. One thing that all women can without a doubt relate to is their uncomfortable interactions with men!  Never have I ever known any woman who has not been made to feel uncomfortable by a man in her life. These are things women are blamed for and because they were never uplifted to call men for their uncalled behavior, sometimes these situations get to them. Sometimes people find themselves blamed for such incidents and it is not a woman’s fault and men should be well aware of the boundaries themselves.

Similar to what most women have been through, we have another example of a very inspiring woman who received an unsolicited text from a local mechanic she visits but dealt with it in such a wise manner. She showed the guy his place! She held the guy accountable for exactly why what he did was inappropriate and could allude to much greater damage. Even though it is not a woman’s job to put in extra labor to educate a man and men should be aware of such things on their own, this woman educated this guy thoroughly about the dangers of messaging a woman the way he did. The outcome of her response was great and everyone was in awe of her.

Scroll down to see for yourself!

The sister of the woman involved originally addressed the issue on Twitter.

1. The thing started when the man sent her a message telling her she is gorgeous 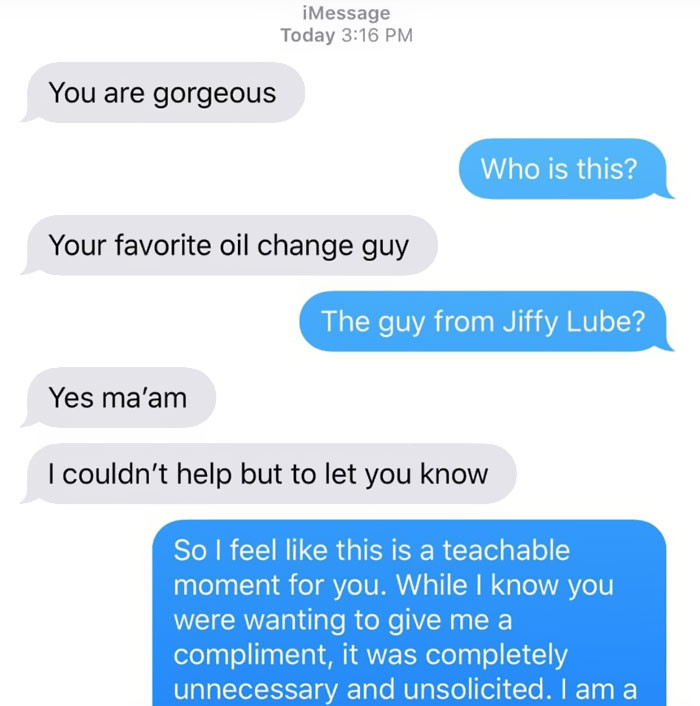 2. She took this opportunity to educate the guy in detail why what he did was not acceptable and actually a matter of concern. 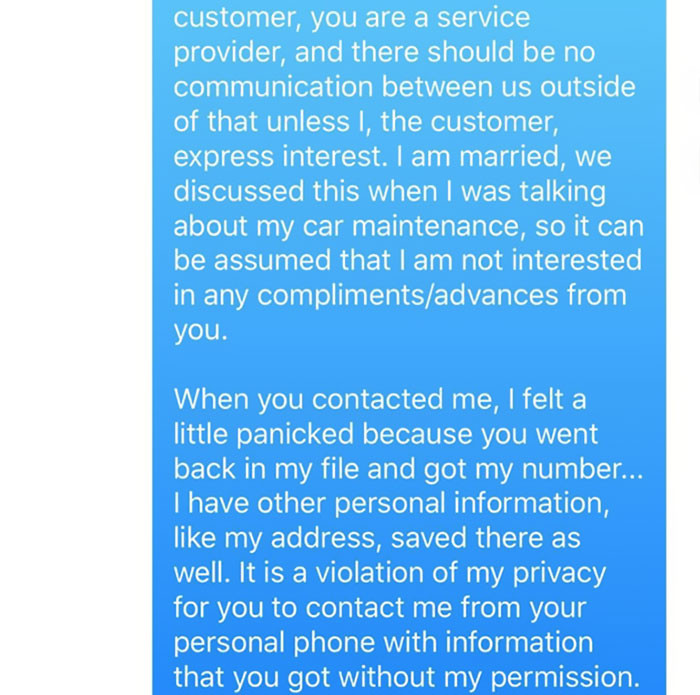 3. Without sugar coating her words, she explained more explicitly how one thing could lead to another and if a man can go through the trouble of getting someone’s personal number without their permission, they could also have the urge to do more. 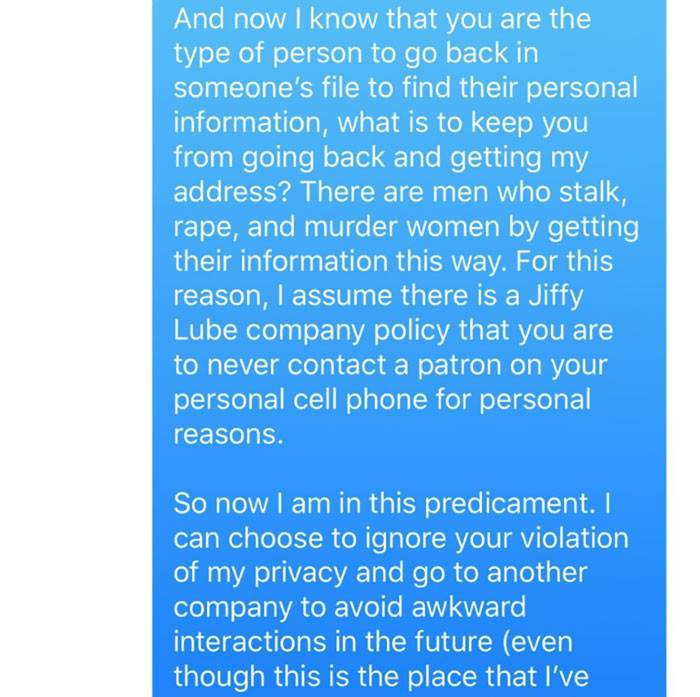 4. Her words were clear and to the point, addressing exactly why such unsolicited messages are harmful. This led to the guy realizing he did something wrong. 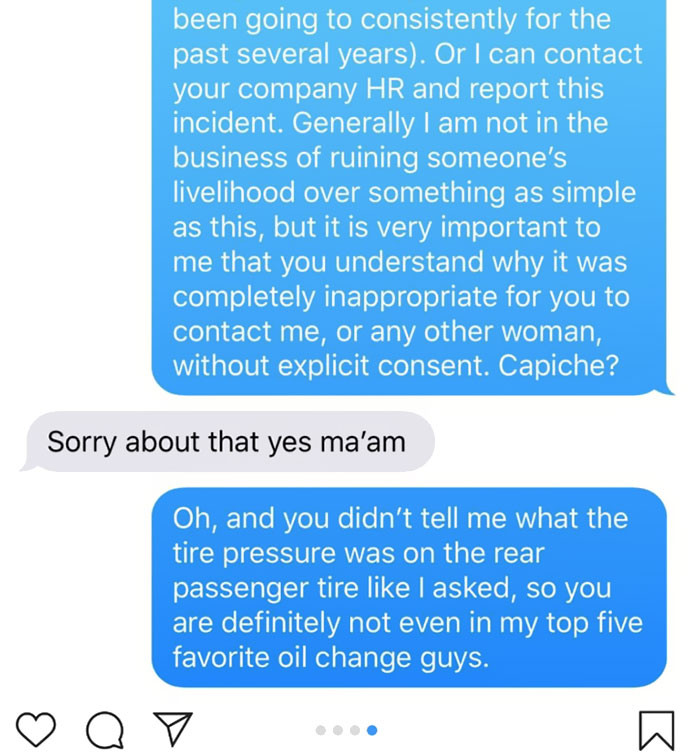 And damn, she finished in such a smart way! There’s no way someone who doesn’t examine your car properly is your favorite oil-changing guy. He should know his place.

Since this issue was addressed online and got a lot of responses, it caught the company’s attention where the guy worked. 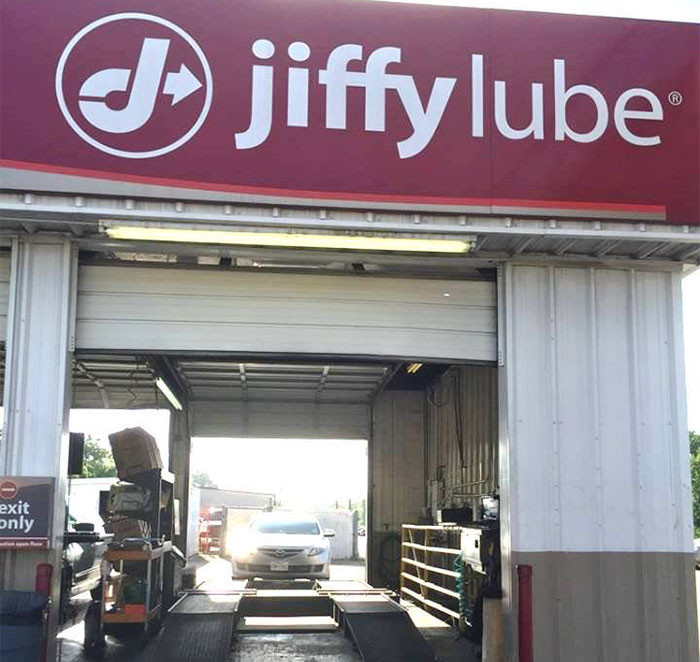 They acknowledged the issue on Facebook and took responsibility for it.

Well, that was really nasty of that guy to pull off such a stunt and it’s people like these, who give a bad name to men only because they just can’t control themselves. That was a major breach of someone’s privacy and pretty alarming as well. On the other hand, it’s kinda funny how the guy thought it would be an easy target. I mean, what was he even expecting? That he would get a thank you? LOL, jokes on him!

However, the good thing is, we are not the only ones who think that way. As soon as the tweet started getting attention, people started to tweet in response. Some of these tweets are hilarious! Let’s go ahead and check them out.

People are wishing the woman gets a free $20! 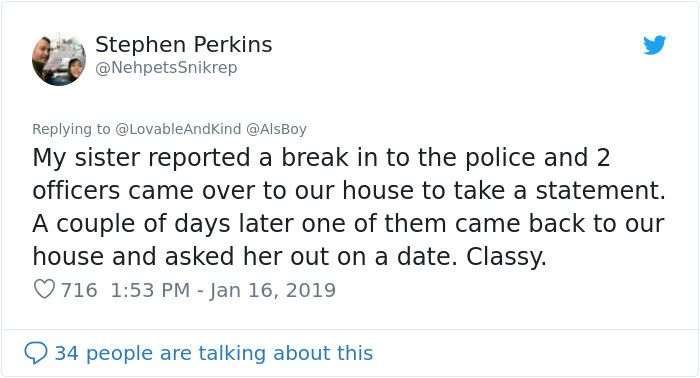 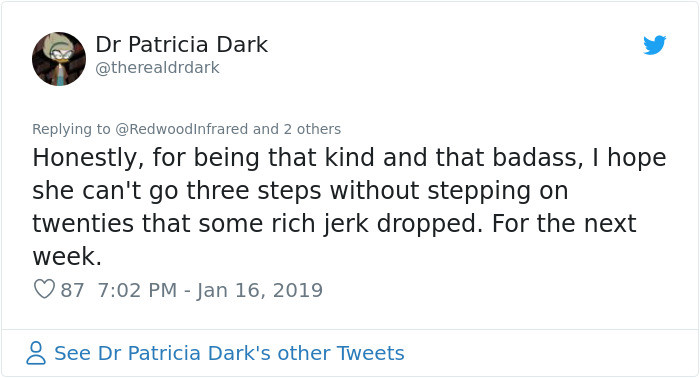 We don’t think so!

This is the kind of male allies we need! 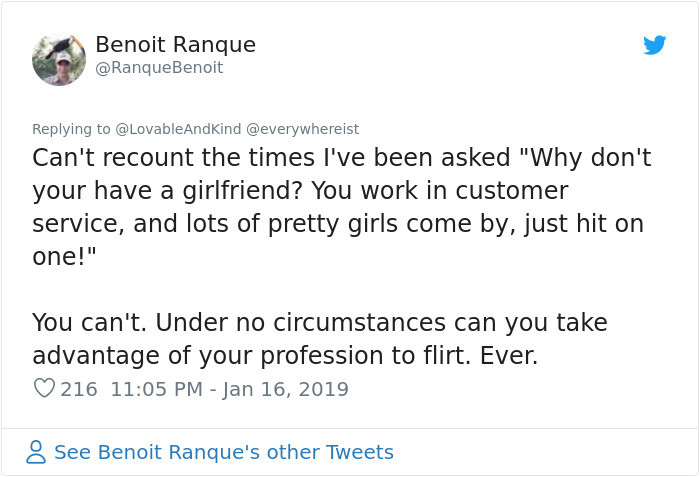 Hope he learns to apologize better in the future but at least he accepted his mistake.

Could not have agreed more to this! Men do not realize how threatening and scary it is to know someone is capable of accessing your private information that is supposed to be confidential. The issue of privacy and confidentiality is a sensitive matter in a woman’s life, and with men constantly crossing a woman’s boundaries, a woman’s safety is compromised. Any woman who is made to feel unsafe would constantly question her every action before she moves on with her day. She will question whether to take the bus or take an uber. She would doubt the bus would be too crowded with men but uber has its own cons too.

If you work at customer service and have contacted a customer by getting their number from their record of information, that customer will constantly worry whether you are following her too. She would be hesitant to leave her house when she has to and be wary of her routine. She might even keep her curtains shut the entire time to ensure her safety. She may even consider not taking her car to any car shop ever again to avoid such incidents.

So, before you think that she did go to an extreme, you don’t know how the world is for women. It’s entirely different and they have to be careful every step of their way. It’s a rare sight when a guy would be harassed by a girl but talk about girls being harassed? Well, it’s an endless loop! Also, it’s not like the girl went extremely rude, she was only being straightforward and that is better. Because if she would have thanked the guy in return, the guy would have taken that as a “green signal” and would continue to cross his boundaries while breaching the girl’s privacy.

Anyways, it is good to know that this man was held accountable and the car shop got informed too. Hopefully, he will never attempt to pull such an act again in the future! Last but not the least, we would like to know about your opinions and your suggestions as well! What if you were caught in a similar situation, how would you have reacted, and do you think what the girl did was right? Do let us know down in the comments section!