Woman Rescued Two Baby Lynxes From A Fur Farm And Raised Them Like Kittens,

Anastasia Poznyak, a Russian national, is a “cat person” by nature but due to life conditions and some indefinite reasons she has eight dogs living with her in her house: including six huskies, a Samoyed and a northern Inuit. 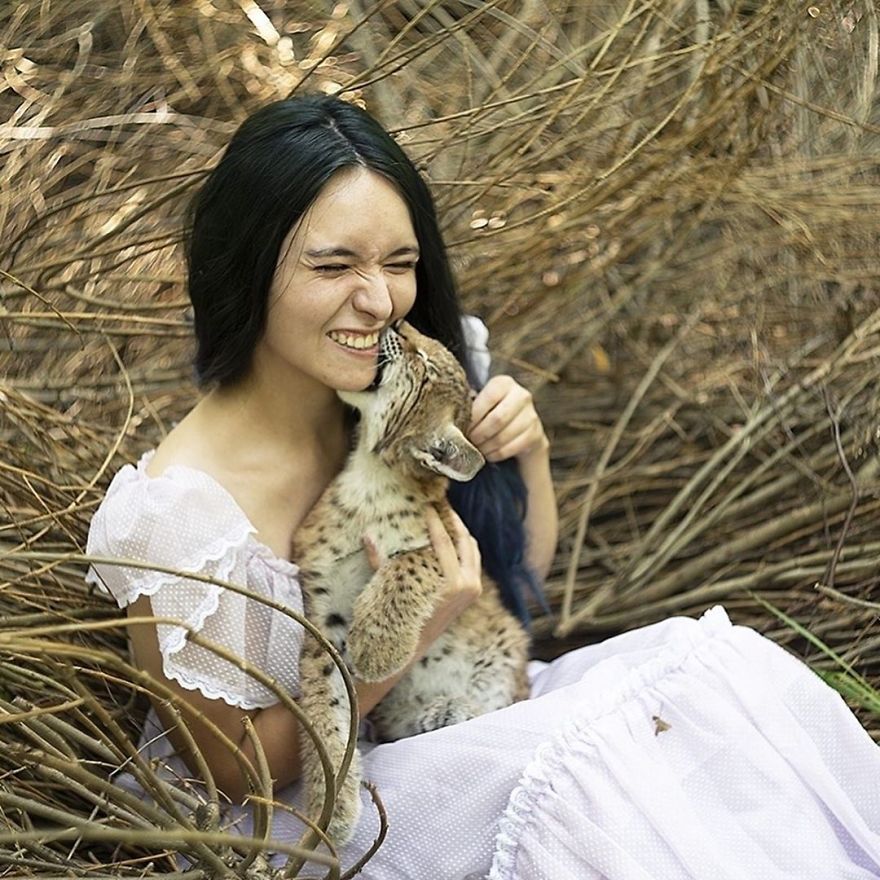 There was no chance of Anastasia adopting a cat as she had so many dogs in the house already. But Anastasia’s love for cats was so much that she desperately wanted one and so she started looking for an animal that may survive along with her dogs. 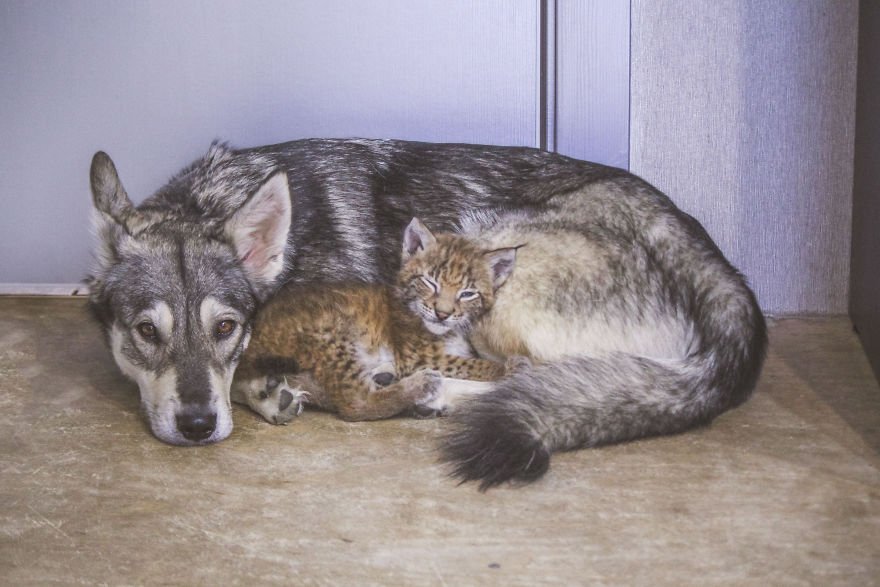 While looking for such an animal she discovered that there are still some fur farms in her country where lynxes are raised and its breeding is done too. 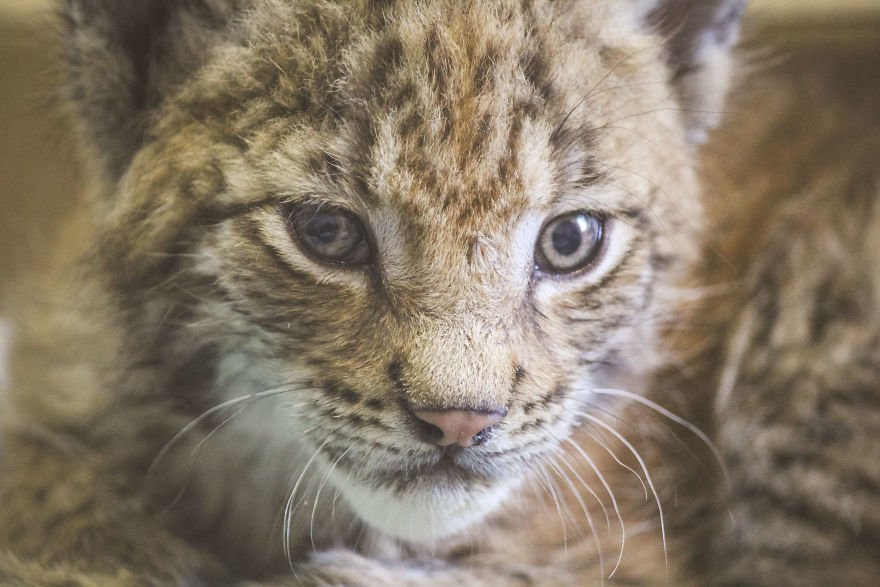 Considering the fact that according to Russian law she is allowed to raise and take care of lynxes at home, Anastasia didn’t think twice before adopting a baby lynx. She named it Geralt after one of the famous characters in the popular TV series The Witcher. 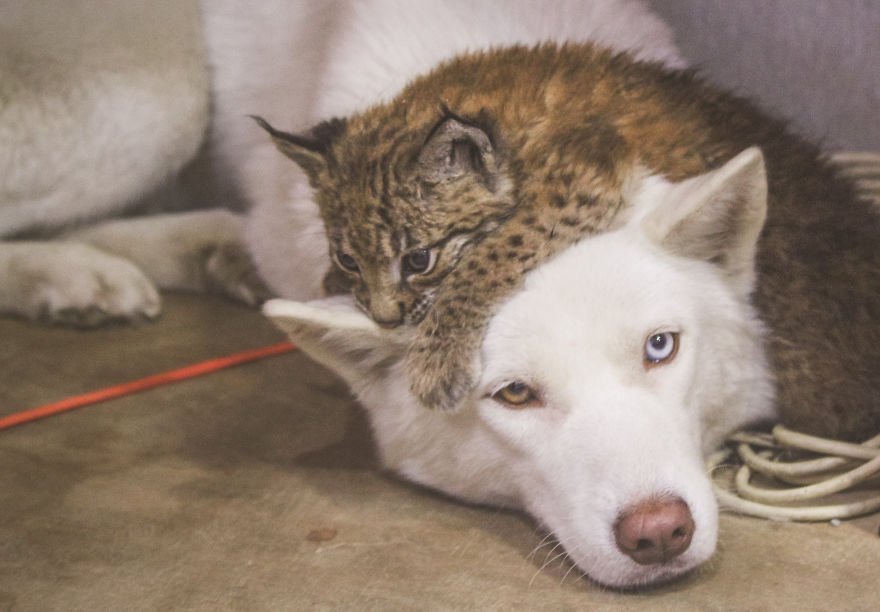 Seeing the dogs welcoming the baby lynx at home was a blessing in disguise for Anastasia. The dogs were of great help for Anastasia in raising the baby lynx by protecting Geralt against any substantial danger, by playing with the lynx, letting him bite their ears and sleeping on their bellies. Geralt used to steal the dogs’ food which sometimes was a moment of joy for Anastasia. 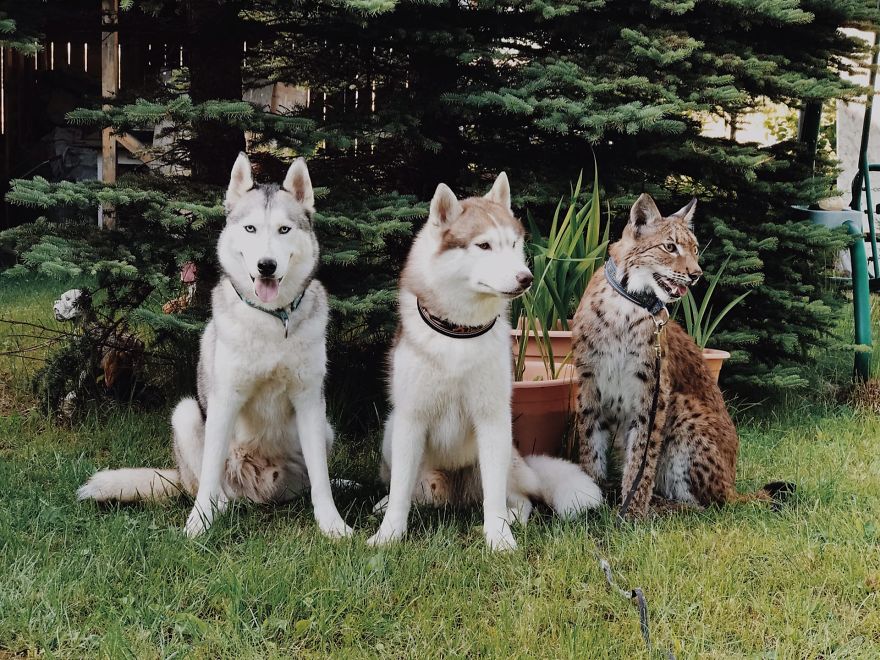 The counsellor and mentor of baby lynx was none other than Banshee, Anastasia’s oldest dog. Banshee helped him to get familiar with the new house and also taught her to fight with the fears and troubles of the outer world. 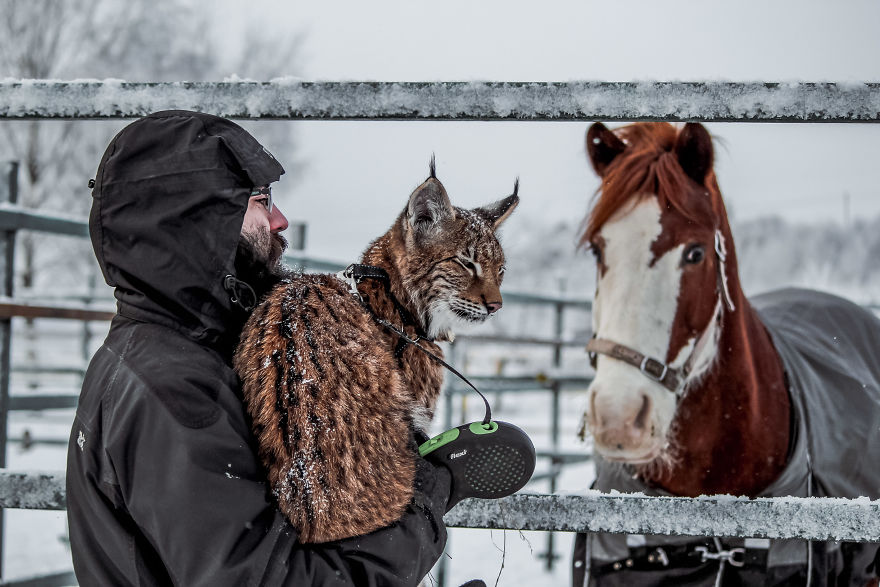 Geralt while growing up developed in him a bit of a troubling nature as it was nothing unusual as this trend is seen in the fellow felines of Geralt. 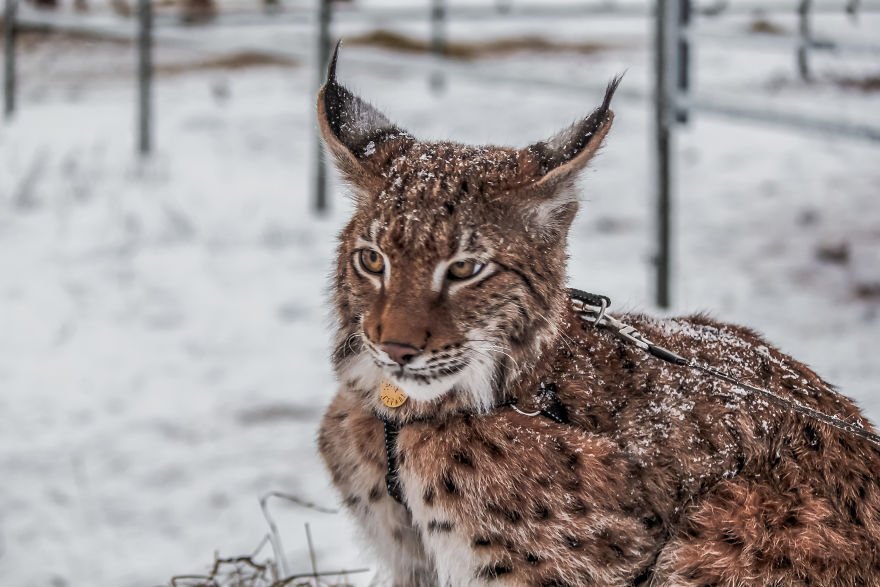 The existence of dogs along with the baby lynx was nothing but very advantageous for him as it helped him learn a lot from the eight big brothers of his in the house. 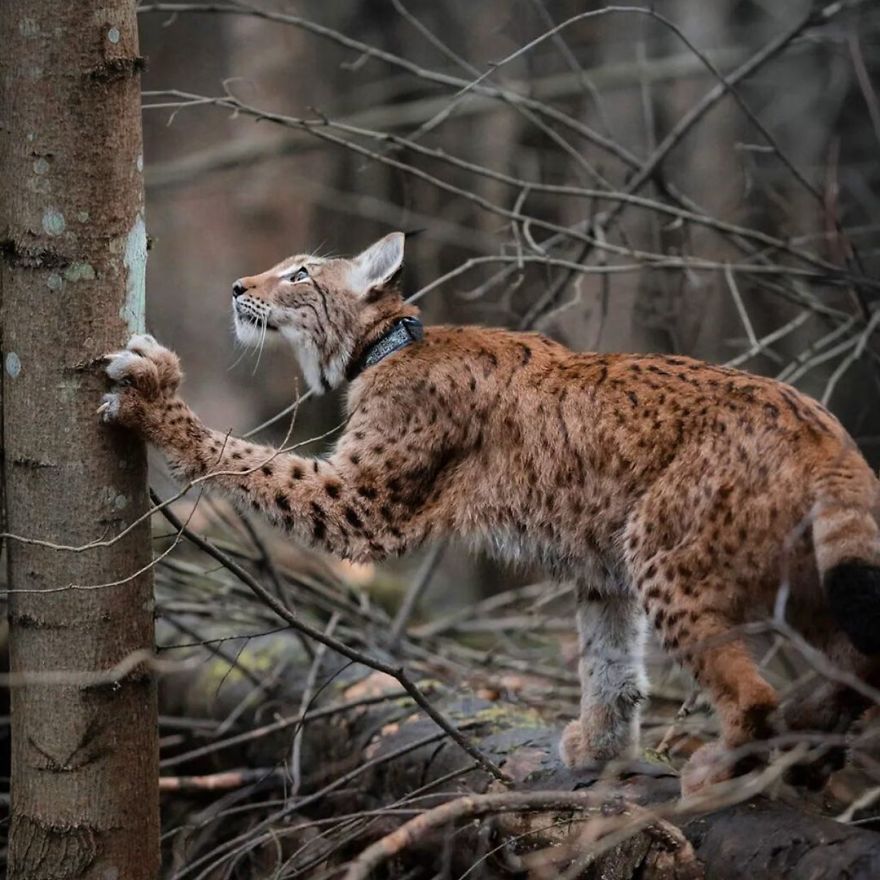 According to Anastasia Geralt is the “body and soul” of the pack.
Moreover, he had a special affection for Texas, one of Anastasia’s horses.
To add to the charisma, Anastasia decided to adopt another baby lynx from the farm when Geralt had his first birthday. This time, it was a female and Anastasia named it Bulochka, meaning Bun in Russian, As she was just very pretty and cuddly. She was so adorable that hardly anyone could resist lifting her in their arms. 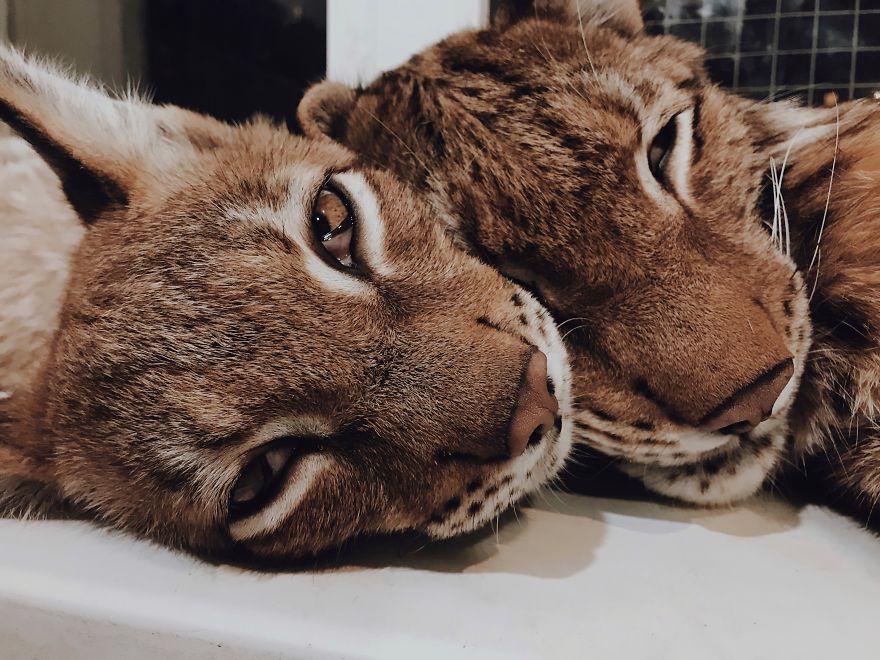 According to studies, the wild lynx prefers to live a lonely life. So Anastasia decided to keep Geralt and Bulochka separately but this was not the case as Geralt welcomed the arrival of his sister with open arms and Bulochka was nothing but a blood sister for Geralt.
“After raising two lynxes, I can safely say that the most challenging thing in this type of rescue is health; since on farms the animals are raised for their fur, their health has never been a priority. Geralt broke a bone and a finger, and he is one of the luckiest and healthiest.”
According to Anastasia dealing with the lynxes and training them till maturity is not a great deal. As in nature, they are very familiar to cats. In order to fulfil their needs, all they need is a litter box and a regular walk to keep them active and interactive with the outer world.
Anastasia says “I enjoy life with her lynxes, huskies and horses and love to help those who decide to rescue big cats with domestication.” 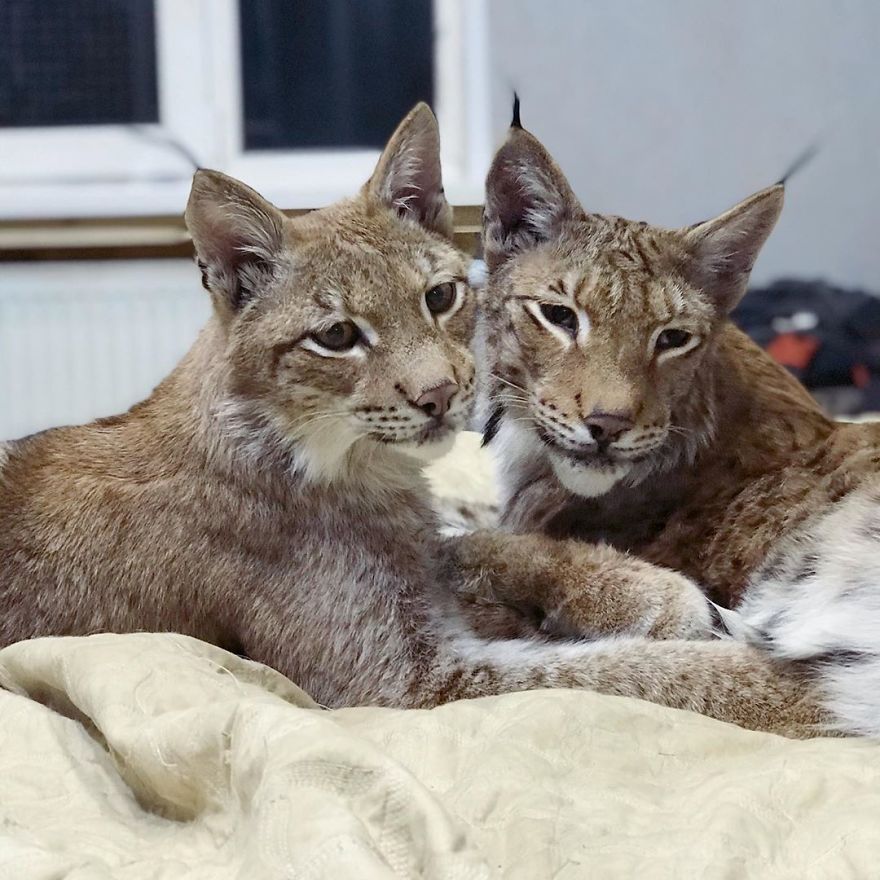 Anastasia plans to add another baby lynx to her family in the year to come as it gives her a great sense of affinity and harmony. This act, according to her, also saves lynxes from the cruel markets of breeders and gives them a new life. 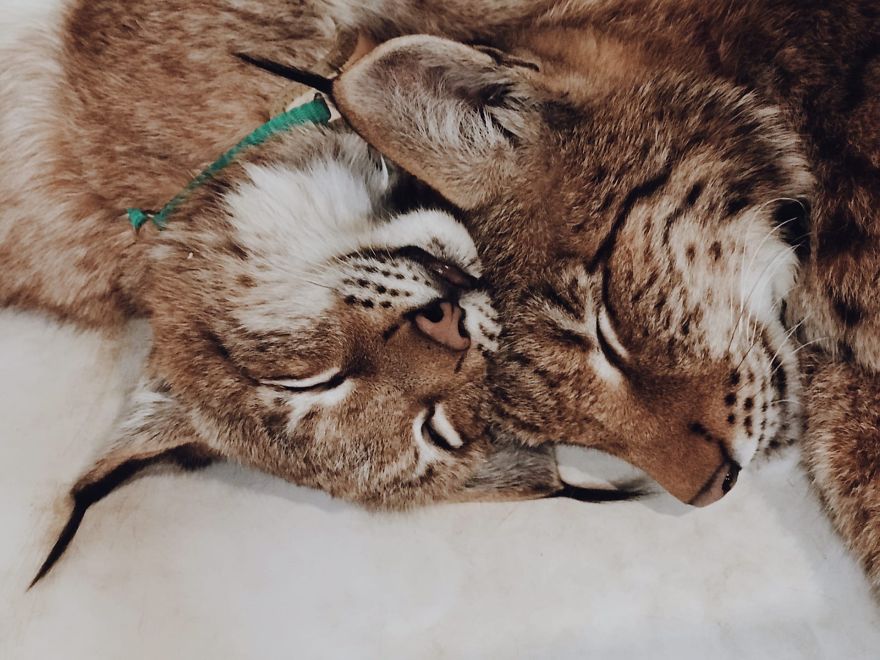 Don’t you think this family is just perfect? Share your thoughts in the comments below.