Being a woman, you will have to face all sorts of difficulties in your life.

You will face challenges in all stages of your life. When you are a child, you will be told how to dress and behave properly “like a girl.” During your academic life, you will be taken for granted because many people think girls are not much smarter than guys. Yes, some people still do believe that. You will also face a lot of drama in your school and college life. In your work life, you will have to deal with problems like mansplaining, and always working in an environment that suits men more than it suits you. Inequality is everywhere. Boy trouble will follow you. You will find out how hard it is to say “no” to some people and how even harder it is for some men to take no for an answer. You start facing these problems at an early age. You will have men making advances at you and you will learn how uncomfortable it can get to back them off. And if they are someone who has a hard time dealing with rejection, get ready for a whole lot of drama. All this makes you think that people need to raise their sons better. They should be told at an early age that they can not always have whatever they ask for. They are not entitled to anything. And if they do not succeed in getting what they want, they have no right to throw tantrums and cause a scene. Men should be taught how to deal with rejection. Their reactions can even get extreme in some cases.

This 20-year-old college student faced a lot of drama when she turned down her classmate who asked her out. When she turned him down for the second time, he just could not handle it and started cussing her. That still was not enough for him and after getting blocked, he made his friends cuss her too. She went public about the whole story and it landed the guy in a lot of trouble. Later on, her friends said she took it too far and she started doubting if she did the right thing. You can decide for yourself after reading the whole story.

They had been talking as just friends when the guy asked her out. She refused and apologised saying she was sorry if she made him think she may have led him on. The guy didn’t respond and disappeared for a while. 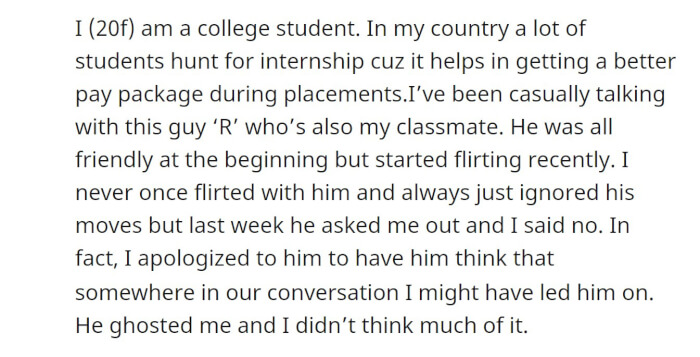 After 2 days, he asked her out again and she refused the second time. The guy became cocky and started calling her names. She blocked him but he made his friends do the same thing to her. She posted all of it on her story, and over 300 people watched it, including her placement mentor. 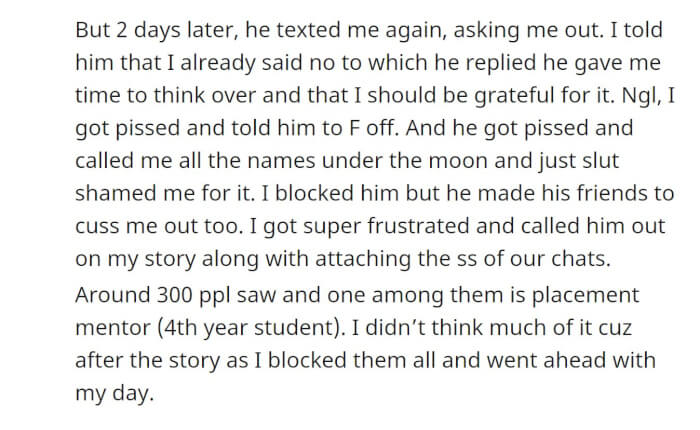 The guy got suspended for 3 months after the department head was made aware of the situation.

The guy lost his internship opportunity. One of the professors asked the girl to forgive the guy so he would get off the suspension, but she didn’t. 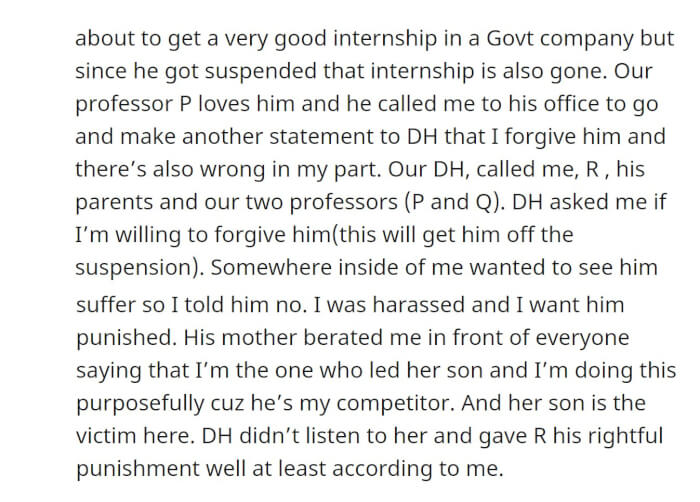 A lot of people have been blaming her for taking it too far and ruining the guy’s career. She asked Reddit if she did the right thing. 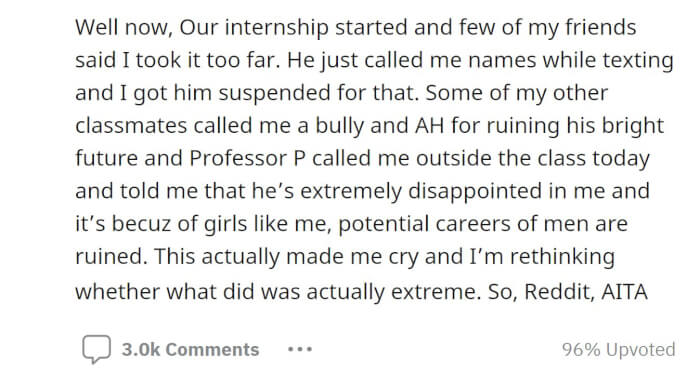 In my opinion, the guy deserved it 100%. If he can not take no for an answer, he is not ready for practical life. He needs to grow up and act mature when dealing with rejection. Some people just learn the hard way.

This is how others responded to the Reddit story. 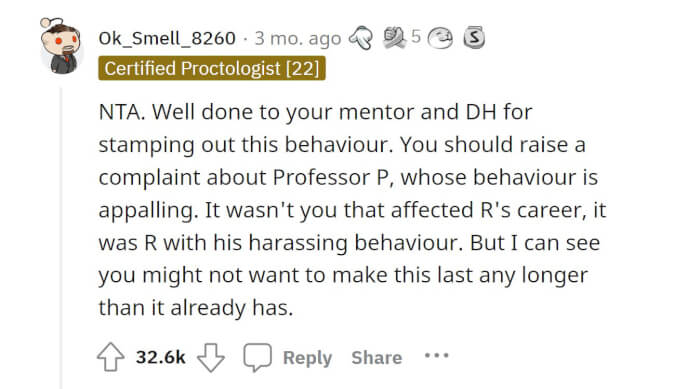 The guy ruined his own career. 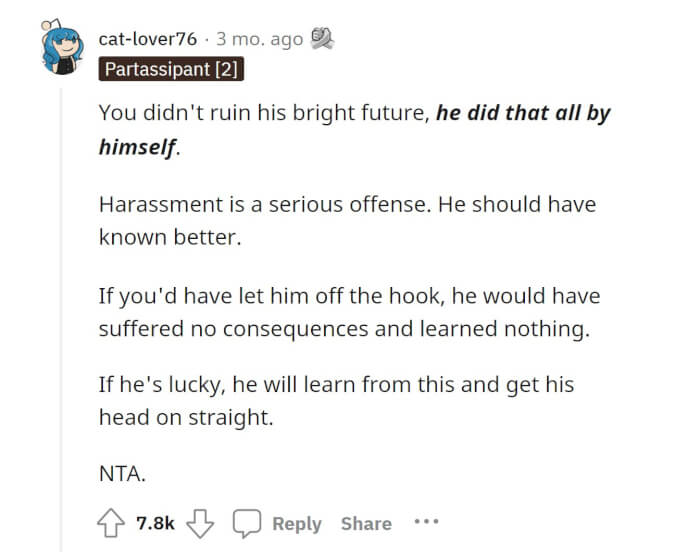 Everyone sided with the girl. 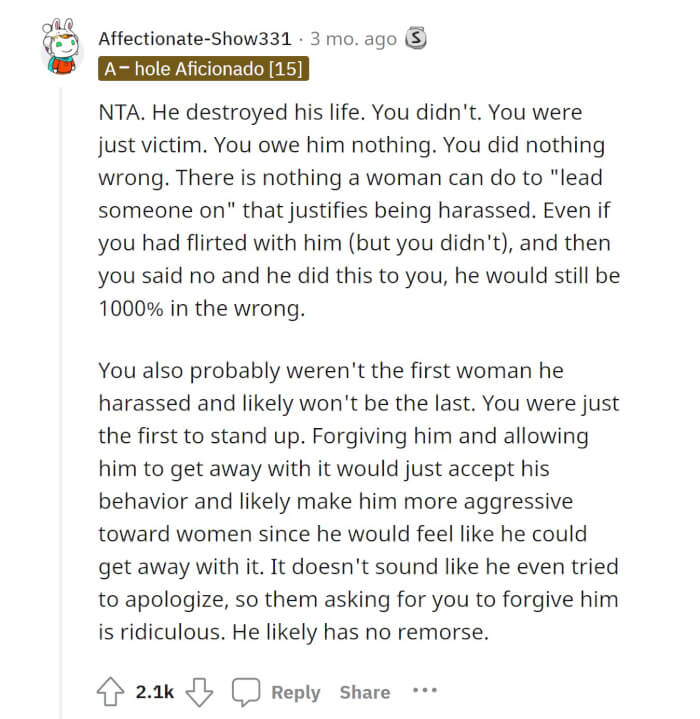 The professor who sided with the guy shouldn’t be a professor. 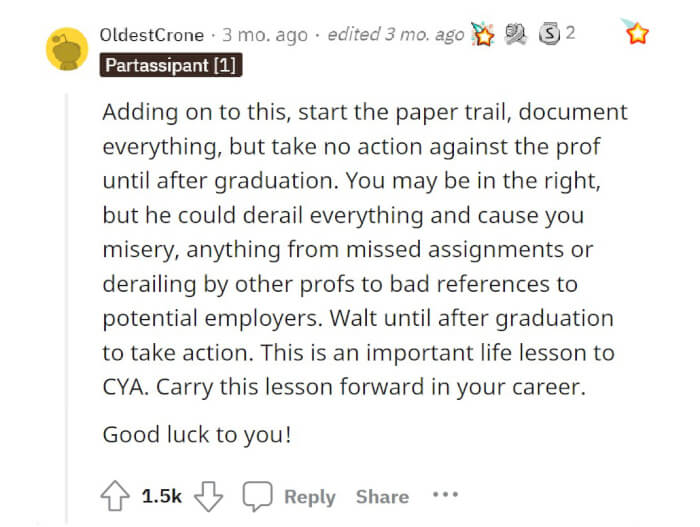 Do you think the girl did the right thing? Share your opinion with us in the comments below.