Many people have overspending problems.

I mean I personally know many people who are compelled to spend their hard-earned money on things that don’t even make sense, or they don’t even need at the need of the day. I understand that not everything has to be of some important use to matter but if you take it too far you will be left with empty pockets. And even when people around us see this, they do little to stop it. Although there is always a right and a wrong way to stage an intervention if you talk about any sort of obsession or compulsion.

And stealing someone’s credit card is not the way to go. You see this girl apparently saw some film about a shopaholic and made an assumption that her roommate has the same problem. We are only starting and this is already quite iffy to say the least. However, she decided that he needed to get better, so she stole his credit card. I don’t know what was going through her head, but she made a fool of herself if you ask me.

It is clear that Anna and him are not even close, and they only know each because of Josh. 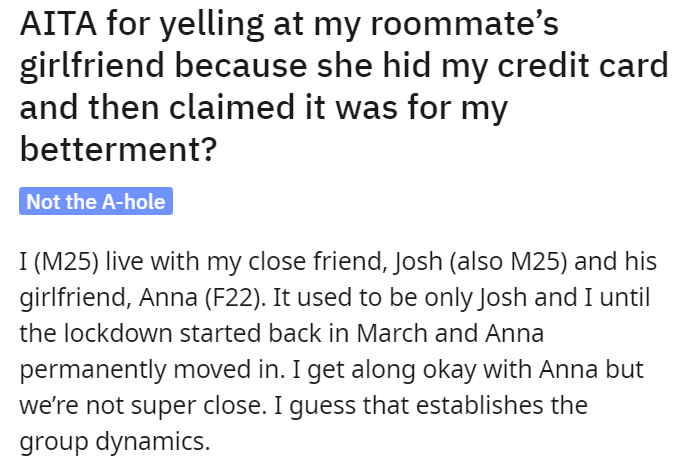 She took matters into her own hands and hid his credit card for his ‘betterment’. 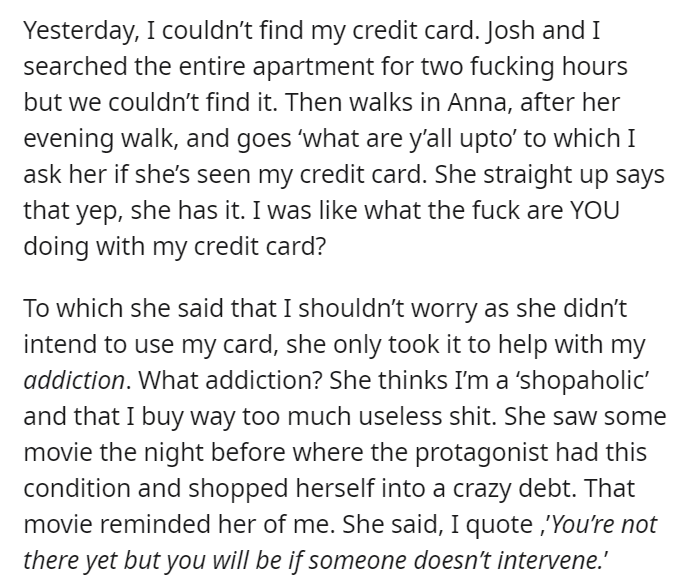 It is not her job or even her business to diagnose him. 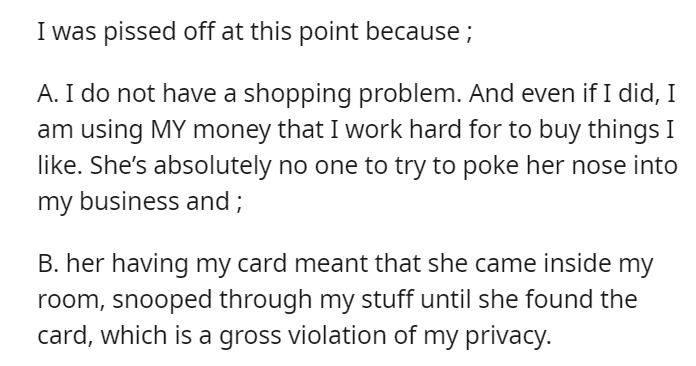 Josh has thankfully not taken his girlfriends side, but we never know what the future may bring. 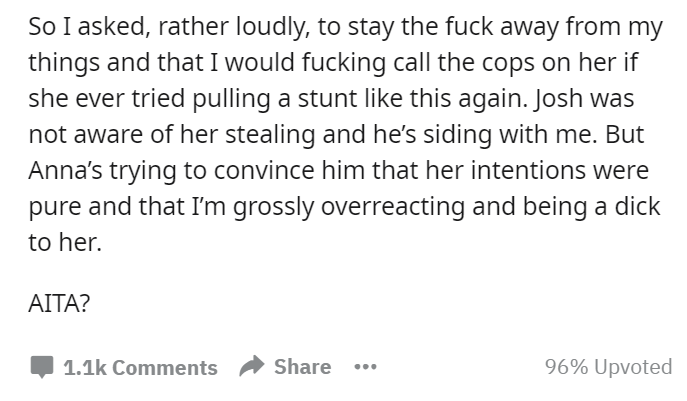 She is meddling into things that she has no business in. 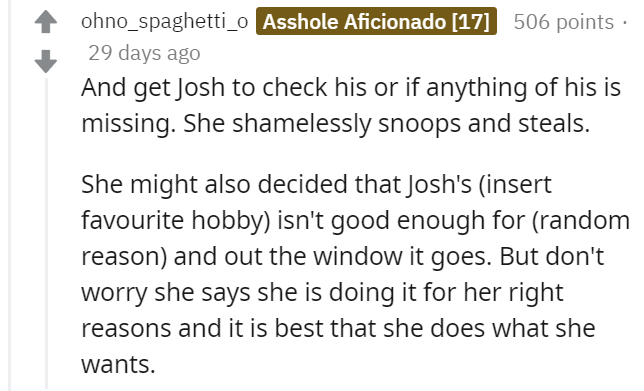 Many people have recommended kicking her out.

As she may not stop at this. 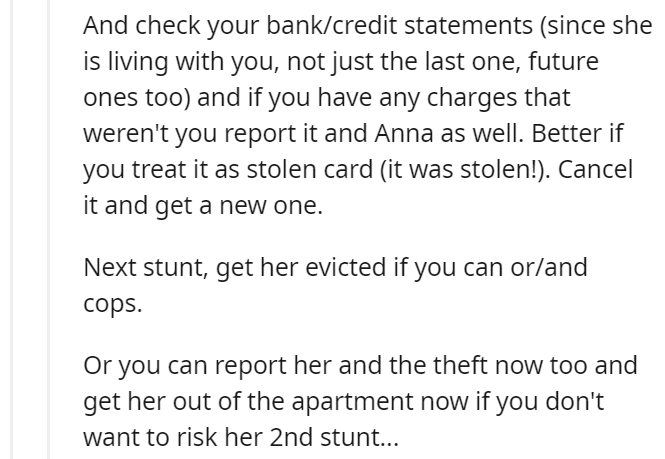 On top of that, replace the card. Jesus. This is theft. Pure and simple. A judge would side with that. Whether she has used it or not, she has the information, no telling when she might use it.

This is a total violation of your privacy. Is she on the lease? If not, get her out. –thedoctordonna88

If he does indeed have a problem, he will have to realize it himself. 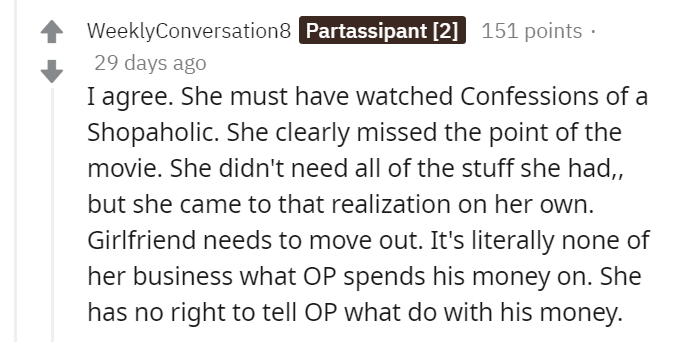 But what she did is straight up theft. No two ways about it. 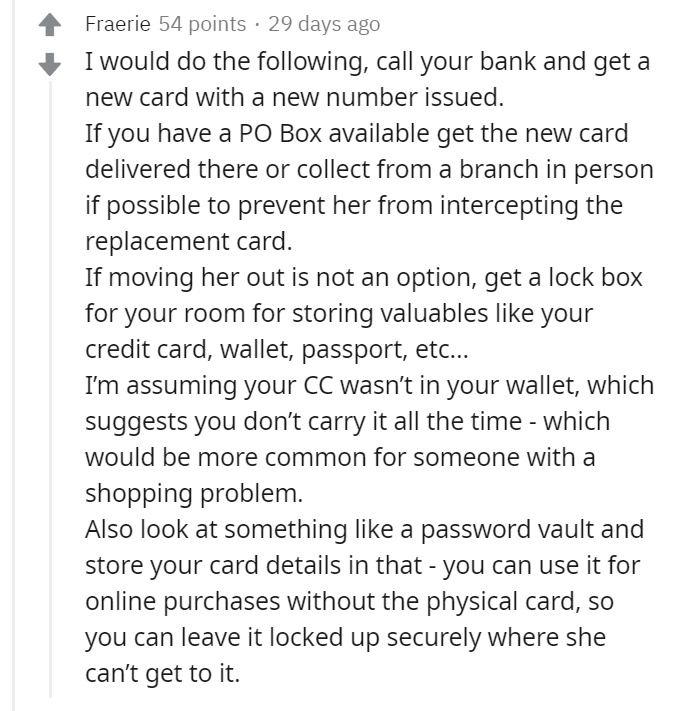 I was afraid that is what was going to happen but surprisingly it didn’t. 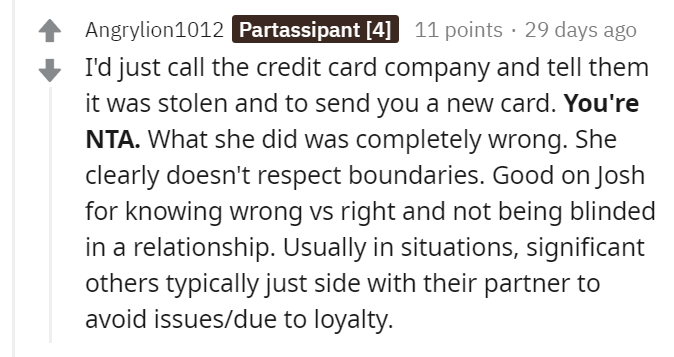 He should be rid of her, but we can’t make that choice for him. 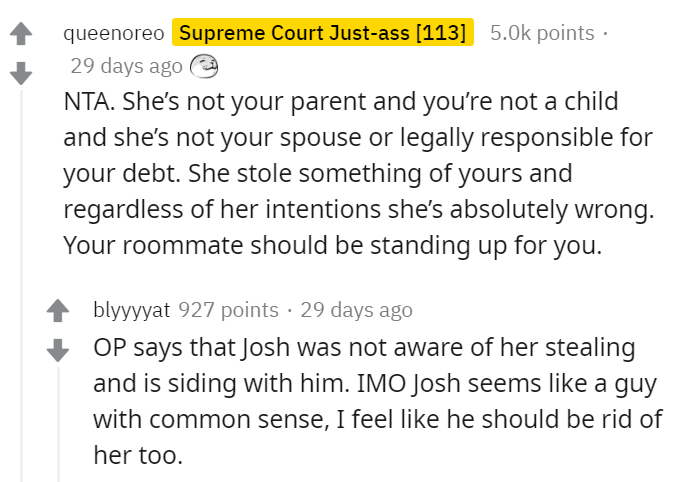 She is hiding behind the mask of ‘sincerity’ and ‘concern’. 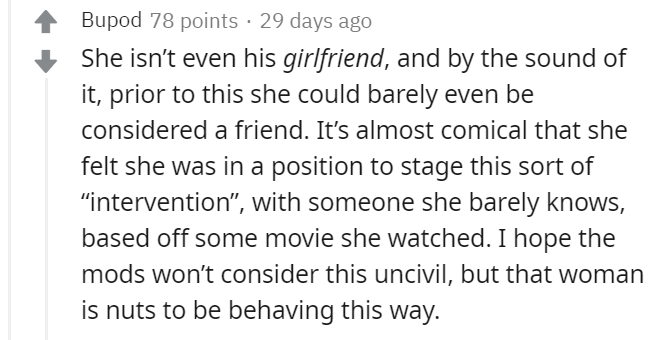 And safeguard the key because she has no respect for his privacy. 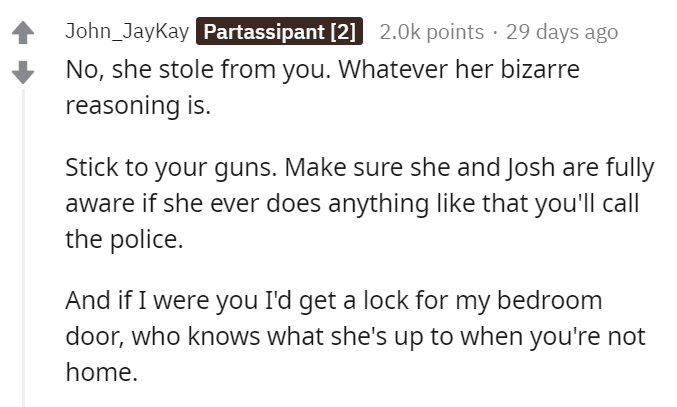 NTA most definitely. Even if she were a certified therapist or medical professional, it is grossly unethical, and illegal even, for her to attempt to “diagnose” and “treat” you without your consent. Also, straight up violating your privacy and stealing your stuff is also illegal.

Her “intentions” in this case doesn’t matter. There are so many boundaries that she crossed in her little stunt here that you need to get all three of you together and lay down the law. Don’t go in screaming and yelling. Get calm and then forcefully but calmly tell her that this is unacceptable and that if this ever happened again, you’ll be taking legal action.

Impress upon her that “overreacting” or not, you have the law on your side, and you won’t hesitate to use it. At this point, it doesn’t matter what her feelings are, she needs to know she can’t do stuff like that ever. –UVsaturated

What would you do in this situation? Would you kick her out or give her another chance? Comment down below and let us know.