This cat owner gave lots of love back to his cats in the most unimaginable way.

The universal rule of life that we believe in, with our eyes closed, is of course to love cats unconditionally. Cats like to give back a lot in terms of cuddles, licks, and hard slaps (all for fun…sometimes). And their hoomans aren’t half bad either when it comes to giving love and trust.

This one cat lover never knew his cat would win him over too good that he would go on to do something like this to give back to her. Derek Roche is a cat owner who at first had no heart for cats at all, but his girlfriend did. She kept trying and convincing Derek to get themselves a new pet cat. And before you knew it, they welcomed a new member to the family, Jellli.

Derek instantly fell in love with her and connected so well with Jellli. His girlfriend successfully converted him into being a cat lover. After understanding Jellli, Derek realized that she wanted to go outside and play but outside can be dangerous at times, and unfortunately, Jellli began to some issues related to her health. So he decided to build an outdoor play area for his cat, which was inside the boundaries of the house and secure for Jellli and her 2 new sisters who were soon adopted by Derek, after Jellli,  to go out at any time and play.

This looks like the world’s best play area! Lucky Jellli. 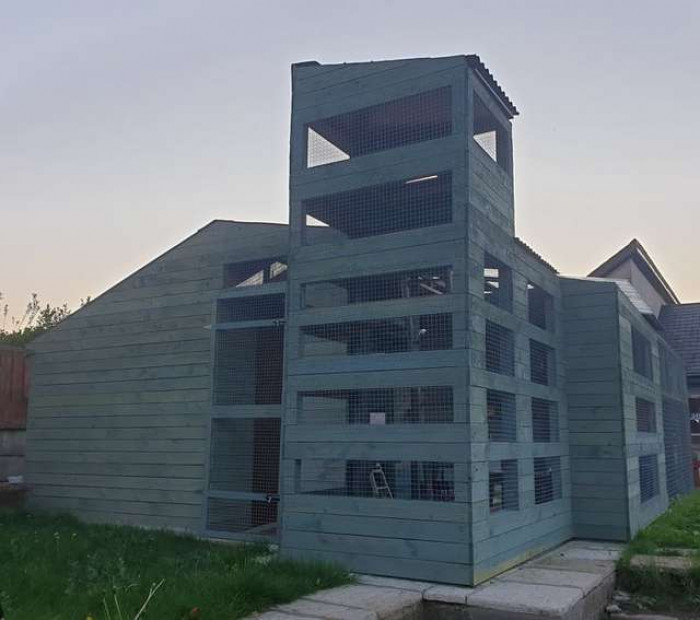 The play area was not an easy task at all. Derek had very less skills in construction, but he knew he had to do something for his cat and stayed commit to the goal.

In an interview with The Dodo, Derek said, “There was a lot of detail in the work, and I was pretty much learning as I went. I had a plan in my head and I pretty much stuck to that. Jellli came on-site every day and I watched her movements and reactions to how things were going, where she liked to sit, how she climbed around the structure. And I used her to get a sense of scale for walkways, doors, etc. I tell people that, as well as my muse, she was my site manager and co-designer.”

“Can’t wait to race against the others to climb up to the top floor. Daddy, please hurry.” 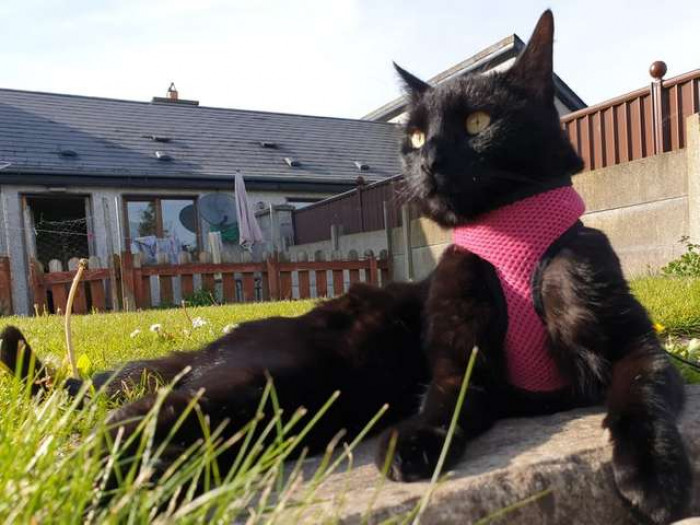 It took Derek 1 year to finally complete the project. Yes, that is not a typo, it really took him a whole year. Jellli and the other cats were very patient and so was Derek. He must’ve been really satisfied with himself when the task was finally completed.

There is fresh water in the play area. Derek has put a lot of potty pots so the cats don’t have to worry about taking a break and going inside every now and then.

We think Derek might find it a little hard to get his kitties back inside the house given how addictive this play area looks. 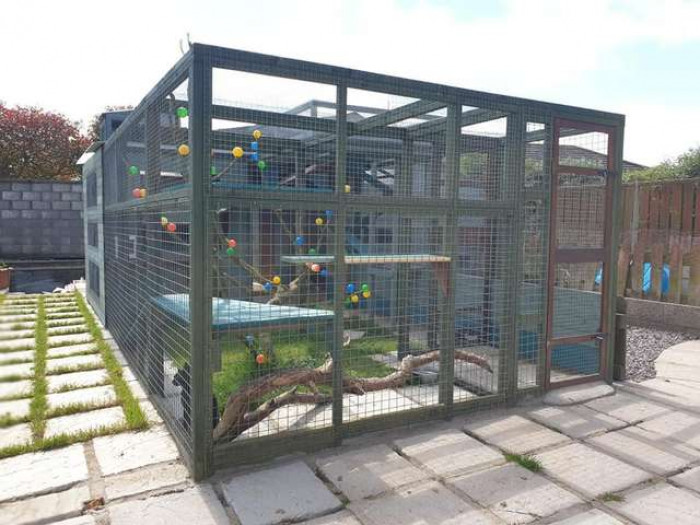 Derek decided to improvise and has been working on a pathway that would lead the cats directly inside the house. The idea is to allow the cats to move back and forth easily from the house to the play area and vice versa.

Derek is going all out to spoil his already spoilt kitties! 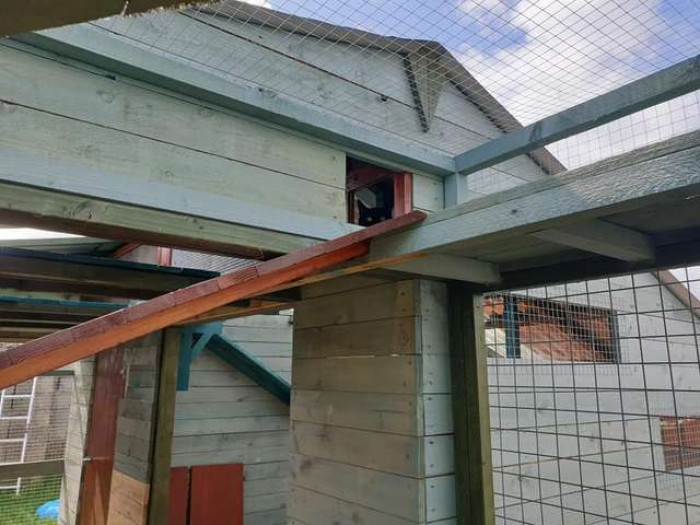 Jellli instantly fell in love with the facility and so did her brother Smudge. Penny, the third of the trio found it a little hard to get adjusted but eventually gained the confidence and joined the 2 in the fun. 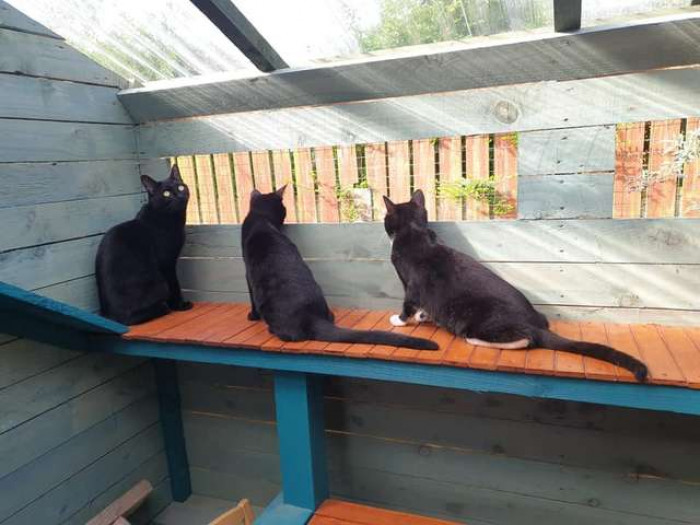 It is a great gesture, what Derek Roche did for his cats, and a perfect example of love and affection is beyond illnesses. Nothing can restrict you from enjoying your life You just need good people around you. And sometimes animals tend to take it upon themselves as well to make sure their hoomans are never sad or depressed. Kitties usually go for the cuddles.

Nothing can stop you from living your life to the fullest, Jellli! 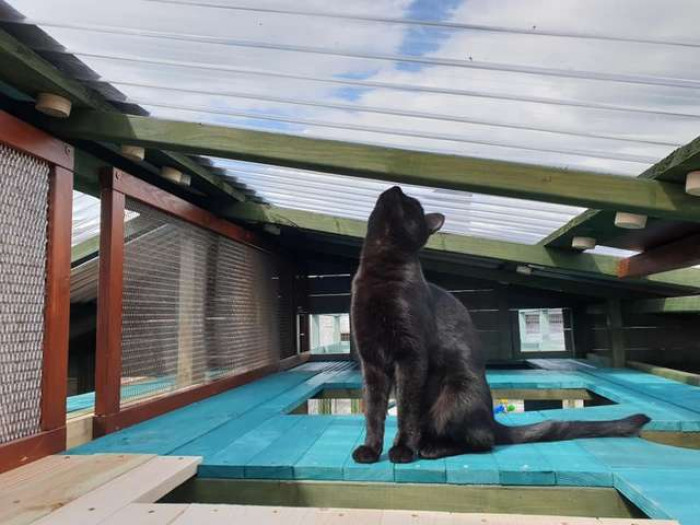 It looks like Roche has set the bar pretty high for the cat owners of the world. And he didn’t even like cats at all, to begin with. Seems like the girlfriend deserves more credit! But it’s the thought that counts. Sometimes, feeding your kitty cat a freshly cooked piece of beef can give it the same level of joy as having an entire playground built for her. So, just keep loving your cats because no one wants to lose an adorable pet like this one.

We hope you loved this story of love and affection. Let us know your thoughts and opinions in the comments. Feel free to share your stories of what good stuff have you done for your kitties.