As if cats weren’t already too cute, this bunny look-alike cat decided to raise the standards without even trying.

Cats don’t need a certificate of approval to let the world know that they are cute, adorable, and gorgeous. They were born with that seal of approval. Their cute furry faces were designed to win the hearts of humans.

I once had a cat, back when I was 4 years old. It was a stuffed toy, not a real one, but for some reason, I was so addicted to that fluffball, and the reason was her cute furry appearance. I used to sleep with her every night.

But it’s not only the furry cats that are adorable. Cute kitties come in all sizes and shapes, one better than the other. Some fall in love with the divine Scottish Fold, while others have the hearts for a cute little Cornish Rex. Everyone has their own preferences, but all these kitties have one commonality among themselves; they want a lot of love and affection, and they want to give a lot of love and affection. It’s that simple.

Among these unique and variety of kitties, there cute little cat called Peanut. He gets recognized from far away because of his unusual and adorable appearance. His face structure is built just like a bunny, and it’s the cutest thing that could ever happen to a cat.

We present you Peanut the bunny ear cat. He’s even squinting here to look more like a bunny. Cutie! 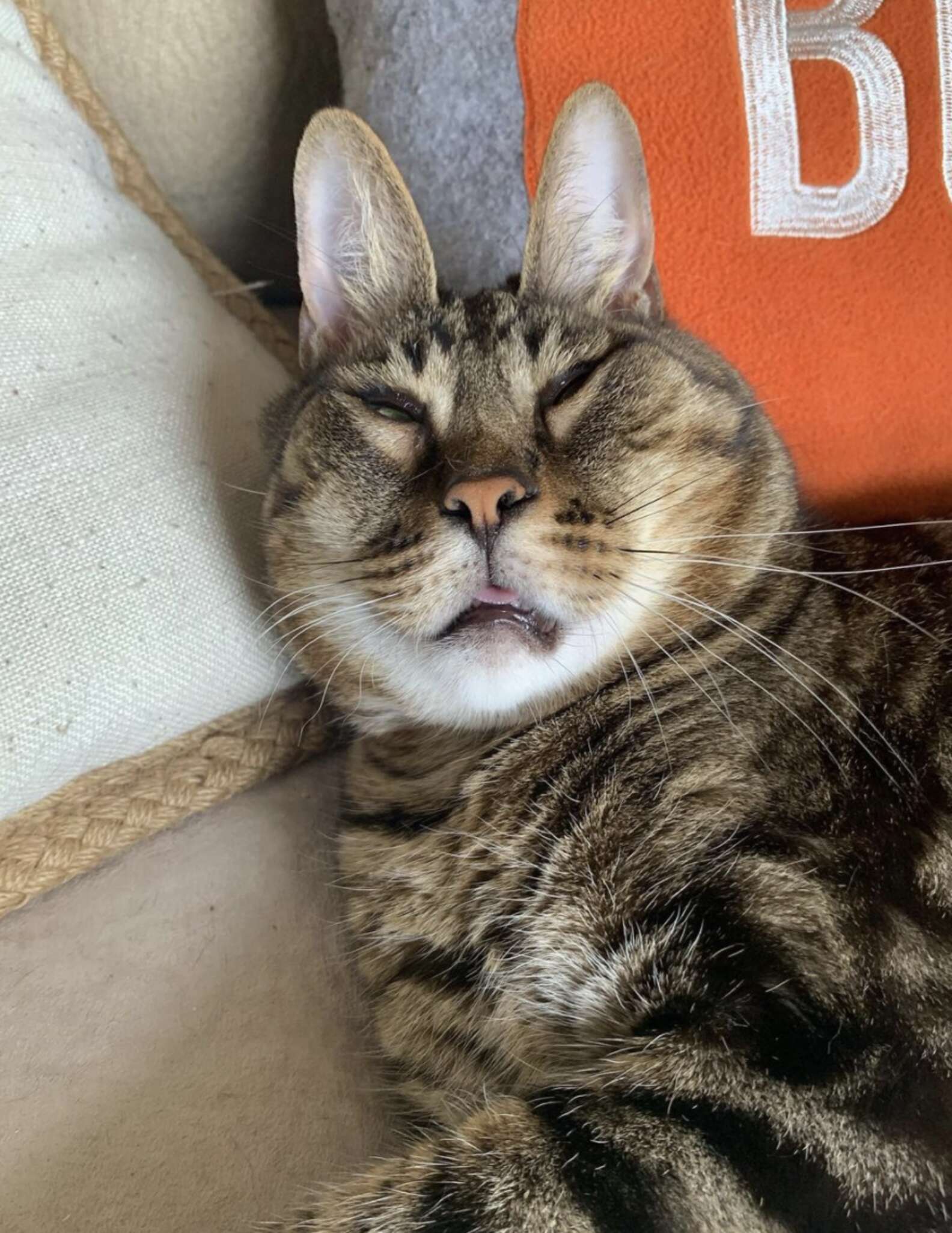 Peanut arrived at a shelter along with nine other cats after their owner passed away. The bunny-like appearance of Peanut makes him stand out of the pack instantly. But there are other factors that contribute to his uniqueness as well. Peanut, unfortunately, is partially blind and deaf. But not for a moment, can this disability stop him from living his life to the fullest.

Looks like Peanut has seen a mirror and just discovered his unusual bunny ears. He looks hot! 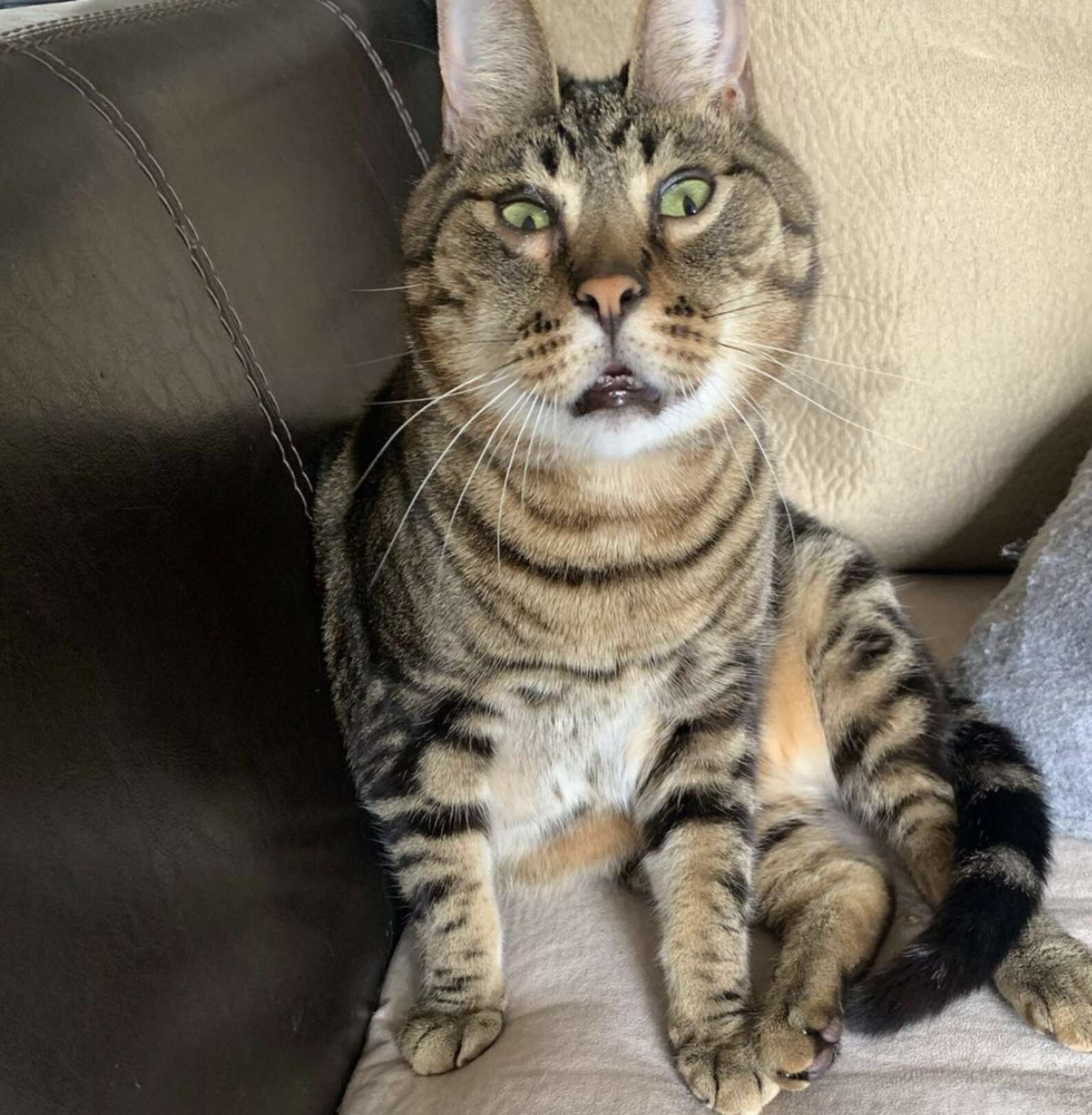 Sydney Benham was the lucky human who instantly fell in love with Peanut. Of course, the appearance of that cat can easily make anyone fall for him. Syndey adopted Peanut in September of 2020. Listening to his story, Sydney instantly connected with the cat and wanted to take him home. Peanut was 8 years old at the time of his adoption.

In an interview with The Dodo, Mama Syndey said, “I knew when I saw him that I couldn’t leave him there.”

He’s perfecting his candid pose. But those bunny ears, we can’t unsee them! No one can. 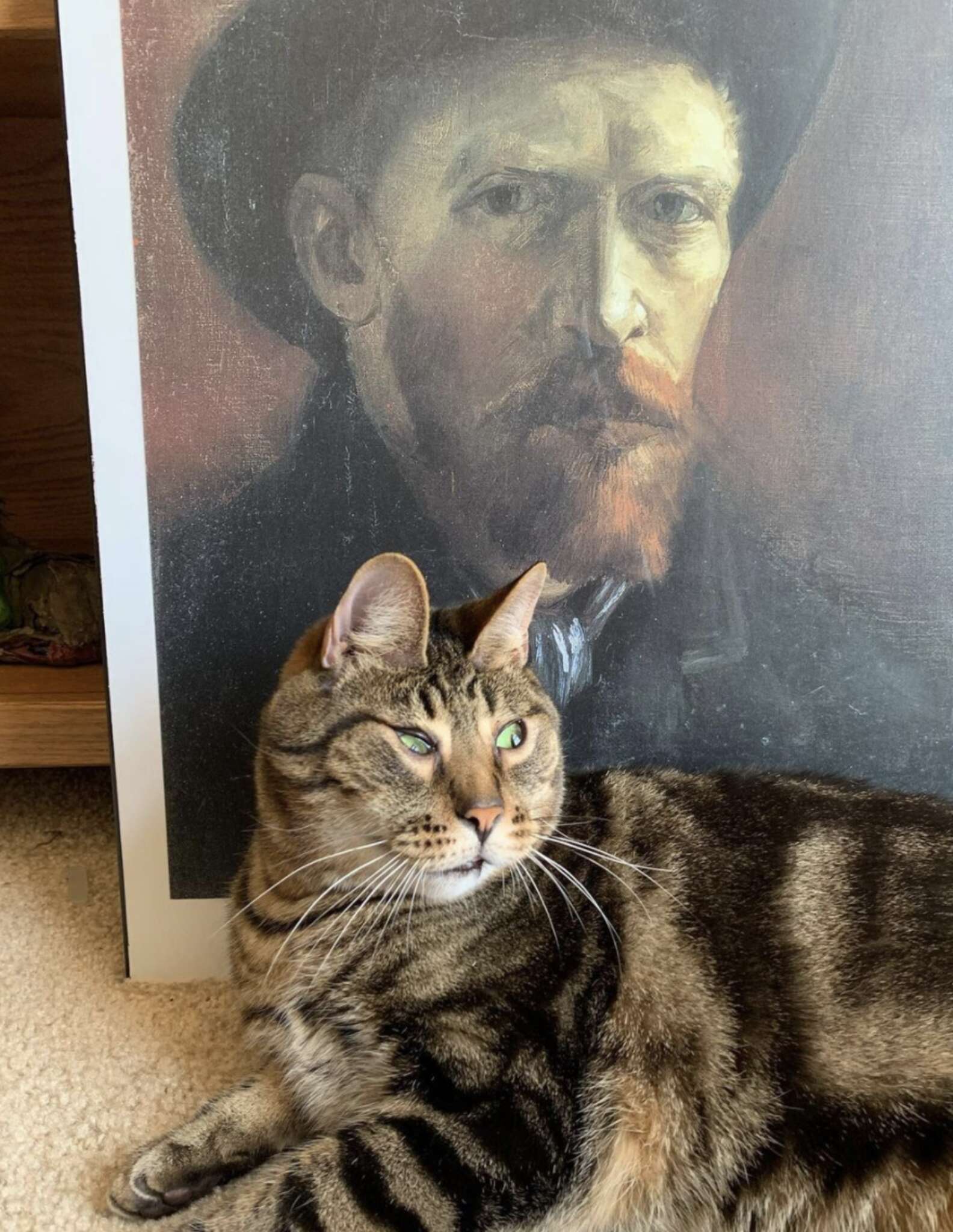 It did not take too long for Peanut to get settled in his new house. He was quick to get familiar. And he welcomed Sydney into his life with open paws (all 4 of em’)

Sydney said, “People will usually fall in love with him right away when they see him. How could they not? He is such a sweet boy.”

Peanut is a weird poser ya know. It looks like he’s just seen a ghost, or maybe himself. 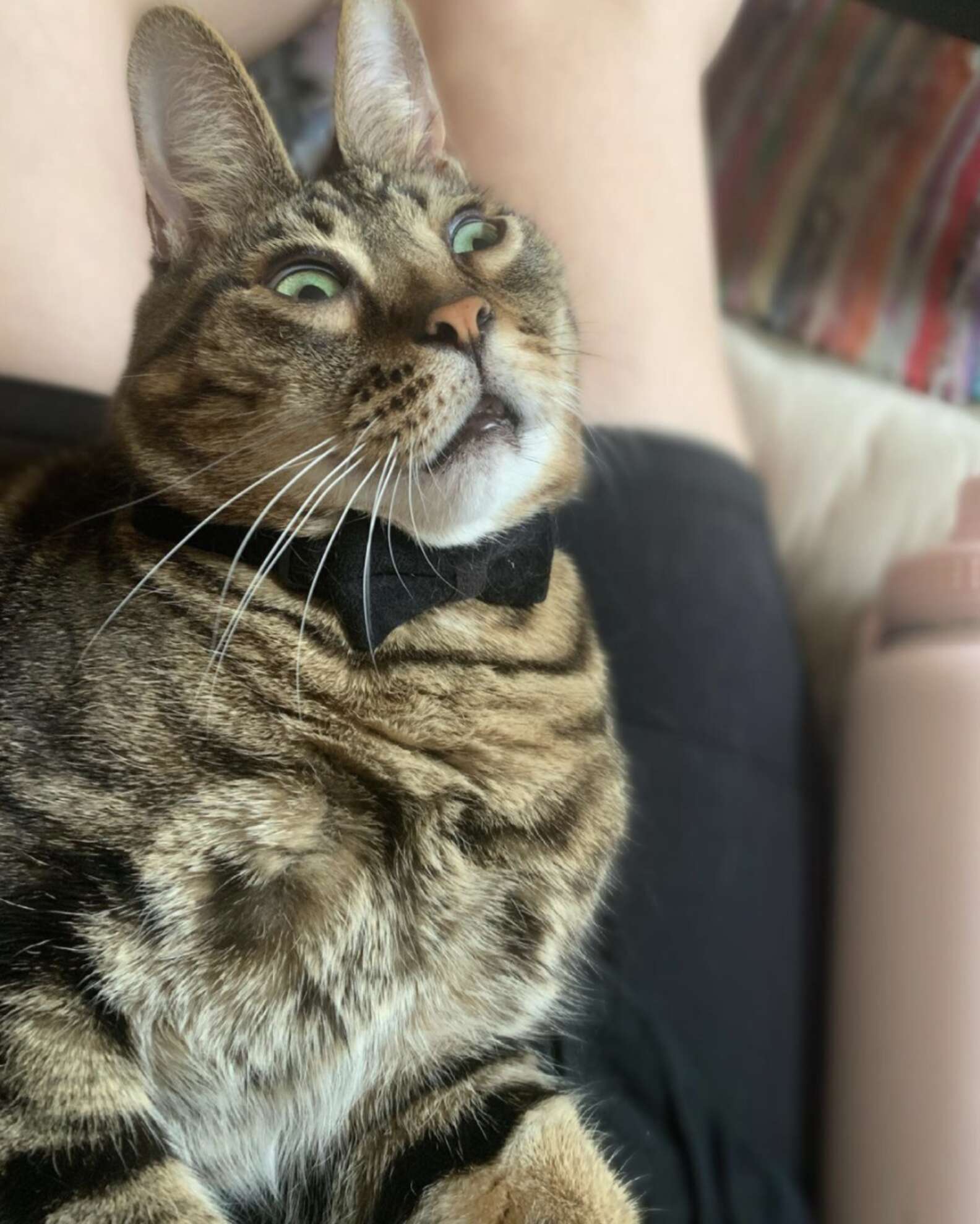 Peanut loved it at his new home. He is a very joyous cat and enjoys every moment with his parents.

Sydney further added, “It’s hard to describe his personality. He is so unique and just simple ‘him’. He is loving and kind, and he loves to play with fingers and chew on his toes. I feel he is a lot smarter than he lets on and purposely ignores me or does things that he knows will irritate me, like jump on my table, for example.”

“His disabilities do not stop him in any way! He is limitless.”, said Mama Sydney about her cute little bunny cat. 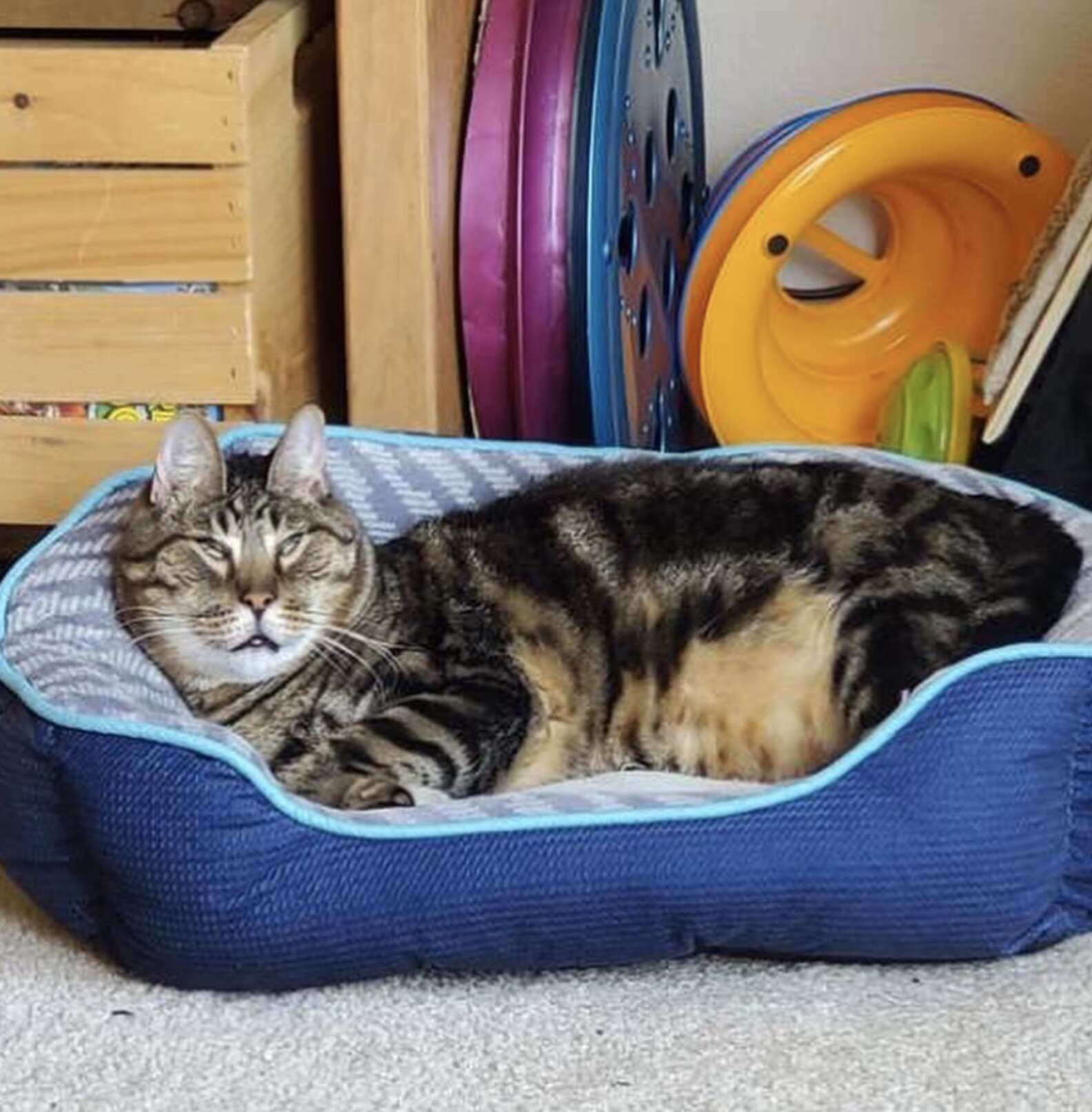 Peanut is a unique cat, that is for sure. He does have some disabilities and a super unusual appearance for a normal cat to have, but all these factors are exactly what differentiates him from others. And in a very good way. People love him. As Sydney said, whoever looks at Peanut, instantly falls in love with him. We believe Sydney was very lucky to lay her eyes on Peanut before anyone else could, and won herself a jackpot.

Awww! Those innocent eyes make him look like a cat, for once. LOL! 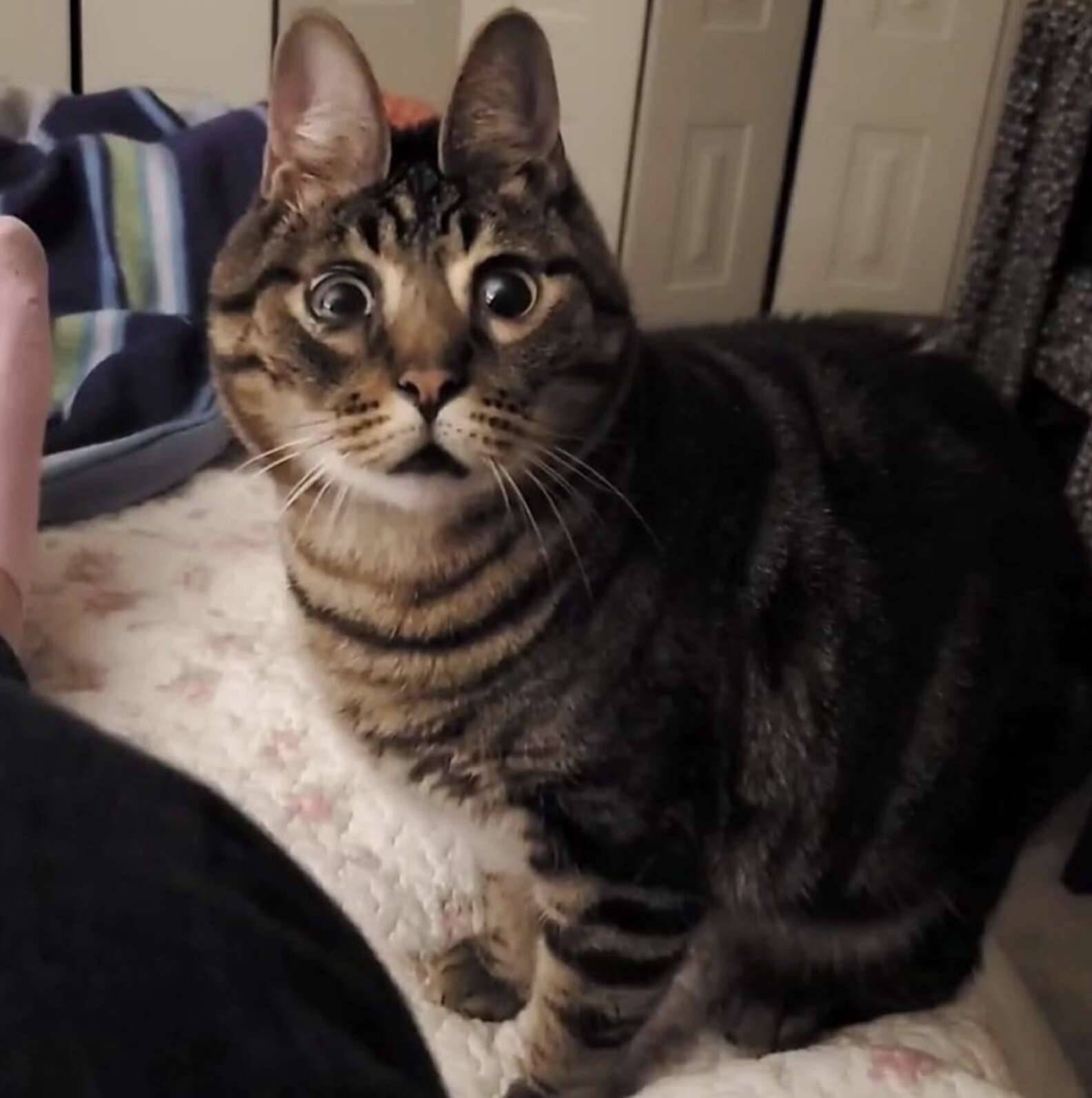 We wish Peanut and Sydney the very best for their future together.

Let us know your thoughts on this story in the comments down below/ What sort of cat do you have and what makes it unique in its own way? Feel free to share.