Are you a comic book fan?

But the comic giants like Marvel and such are just not doing it for you anymore? Perhaps you want something with a bit more horror in it? If that is the case then you have come to the right place. Today we have some of the best work by the talented artist Yael Nathan. However, these comics come with not only a gorgeous art style but also a pretty detailed story which are provided by the writer known as Ehud Lavski.

Both of them work together to create these species of art and millions of people all over the world have become enamoured with their comics. And there is a reason for that which you will understand after you read at least one of their comics. Today we have some of their latest works which include three new comics for your pleasure. Just scroll below to take a look for yourself.

#1 This is a story of a Hunter and his unrelenting thirst for hunting creatures that never got sated. 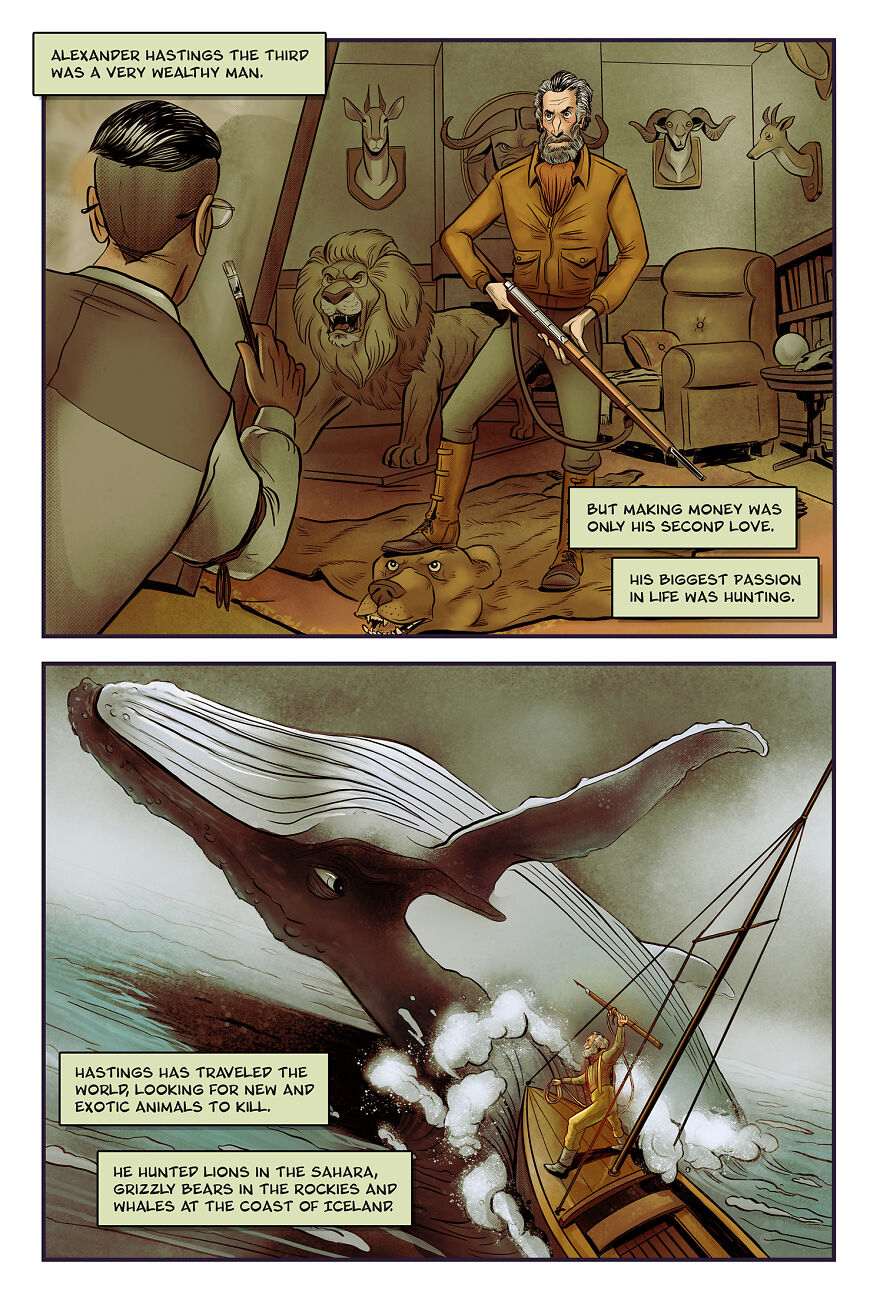 He had done all there was when it comes to hunting. 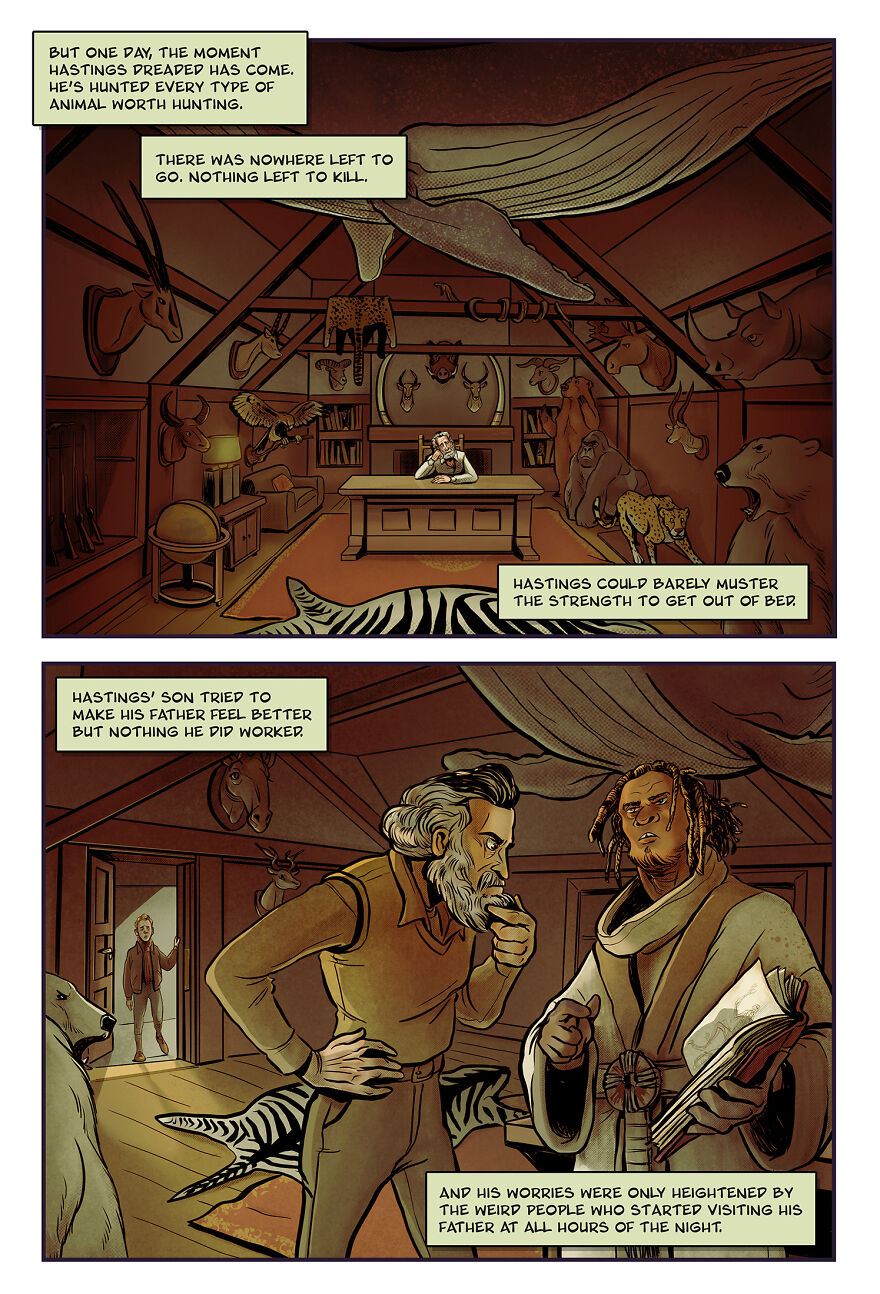 He clearly wanted to feel the thrill of hunting again. 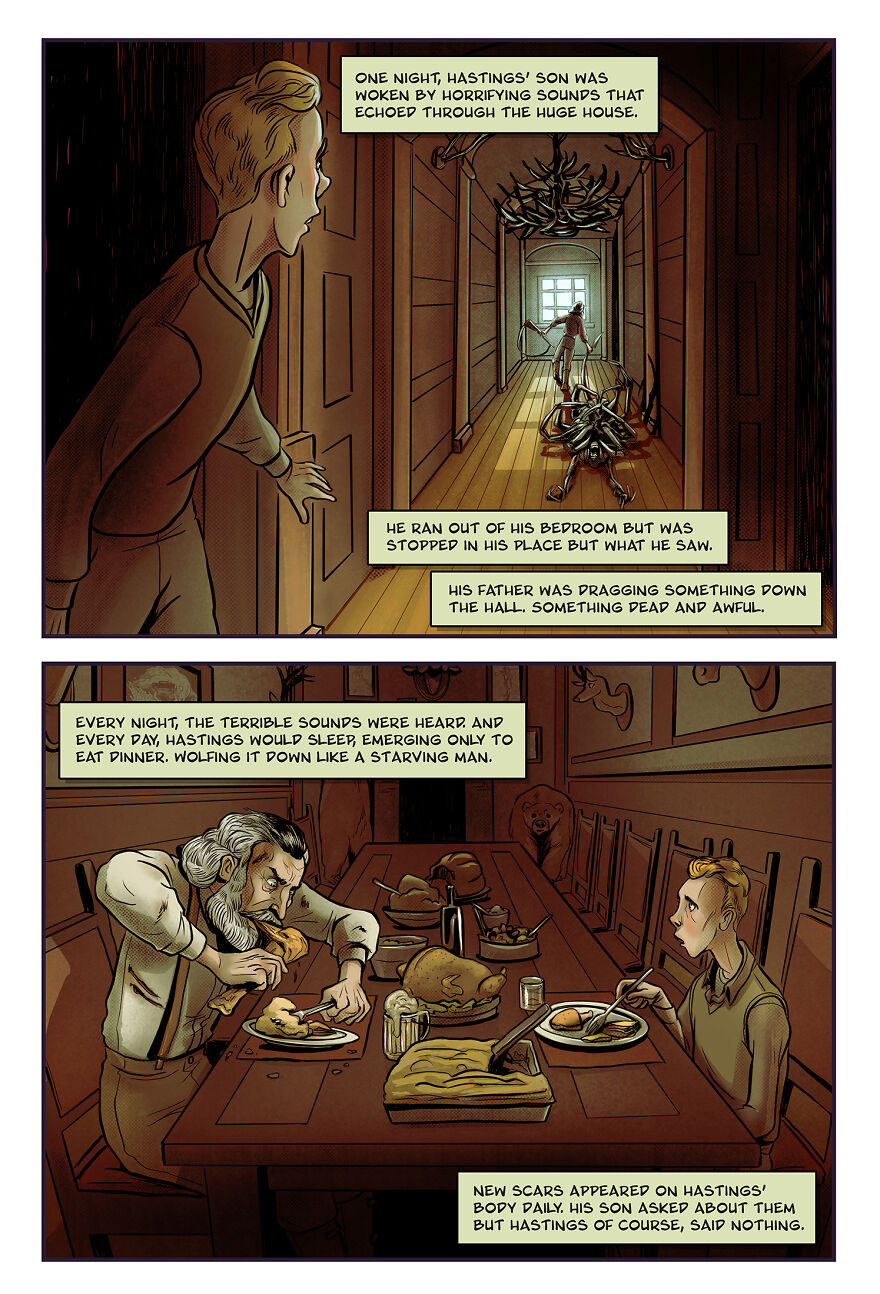 So when he couldn’t find it on this plane of existence, he looked towards other realities. 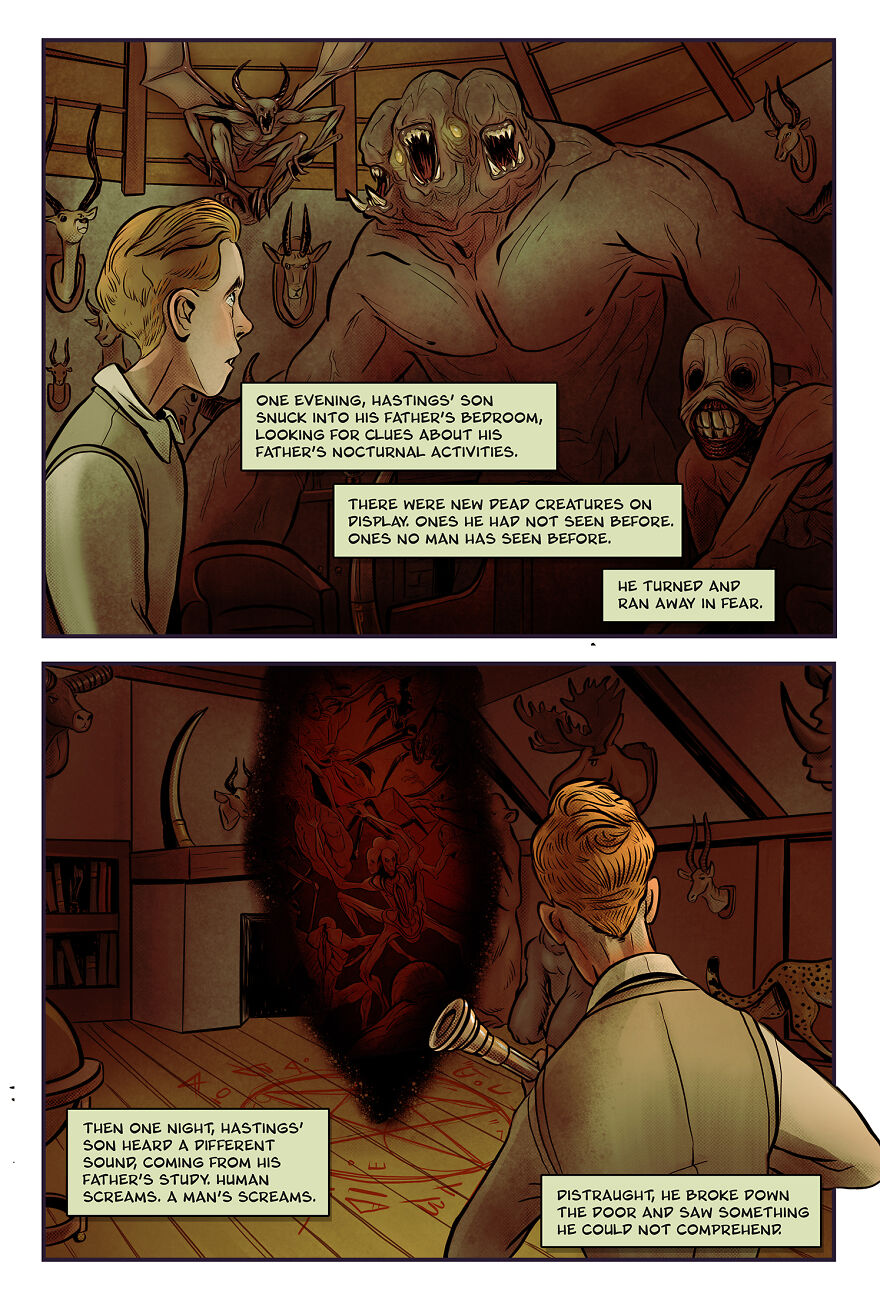 And he got what he wanted but it came with a dreadful price. 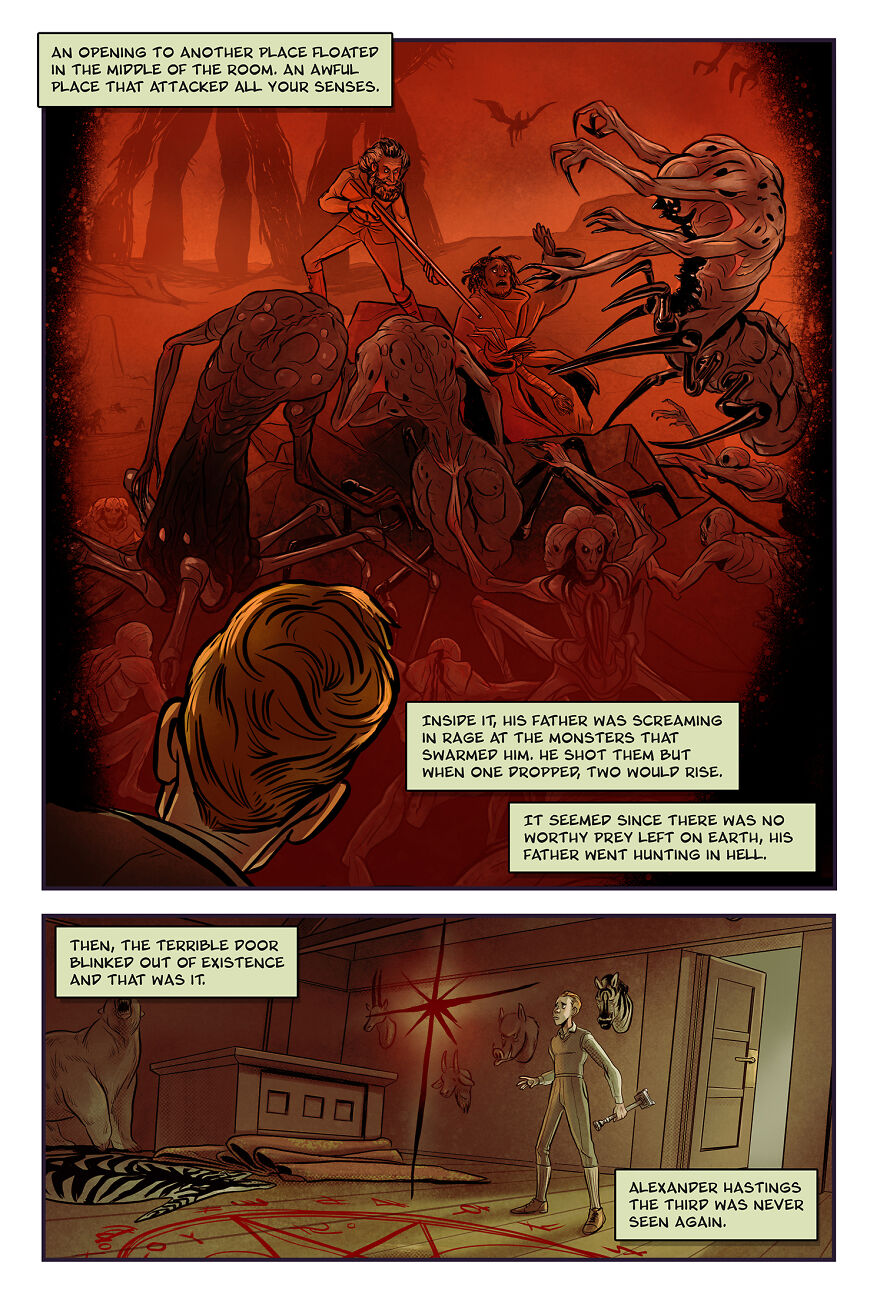 My name is Yael, and I’m an illustrator and comic book artist. I draw webcomics with writer Ehud Lavski and I have my own ongoing webcomics. Ehud Lavski and I began creating short comics and uploading them to the internet. So far, our comics have been read millions of times and many people have a strong emotional response when reading them.

Below are our latest works. The three of them (like a lot of our stories) are fairy tales in a way: a rich man with an insatiable hunger, a missing boy, and a found diary recounting an otherworldly encounter. -Yael

#2 This is a story of parents who lost their son and wanted him back no matter what. 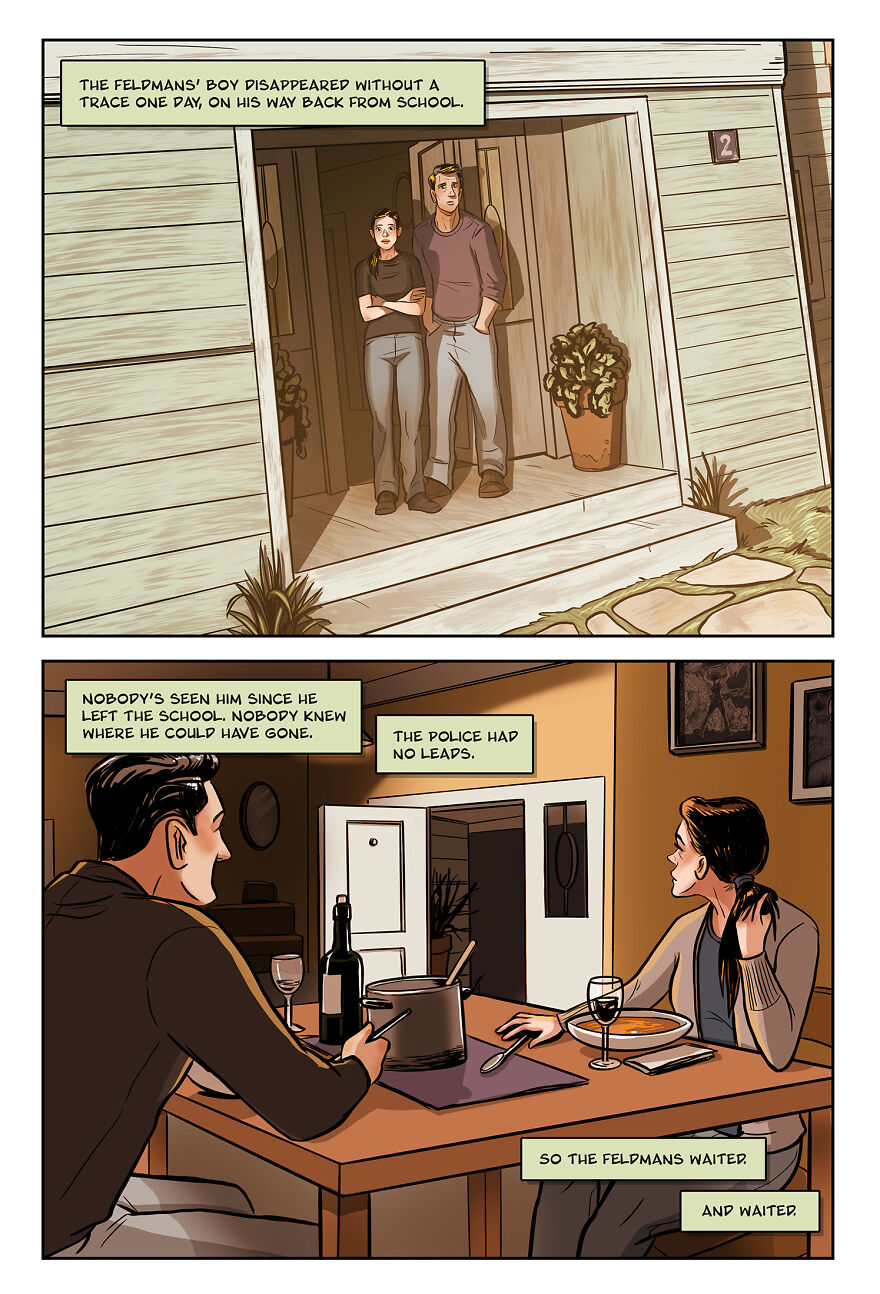 Which led them to a witch to ask for help. 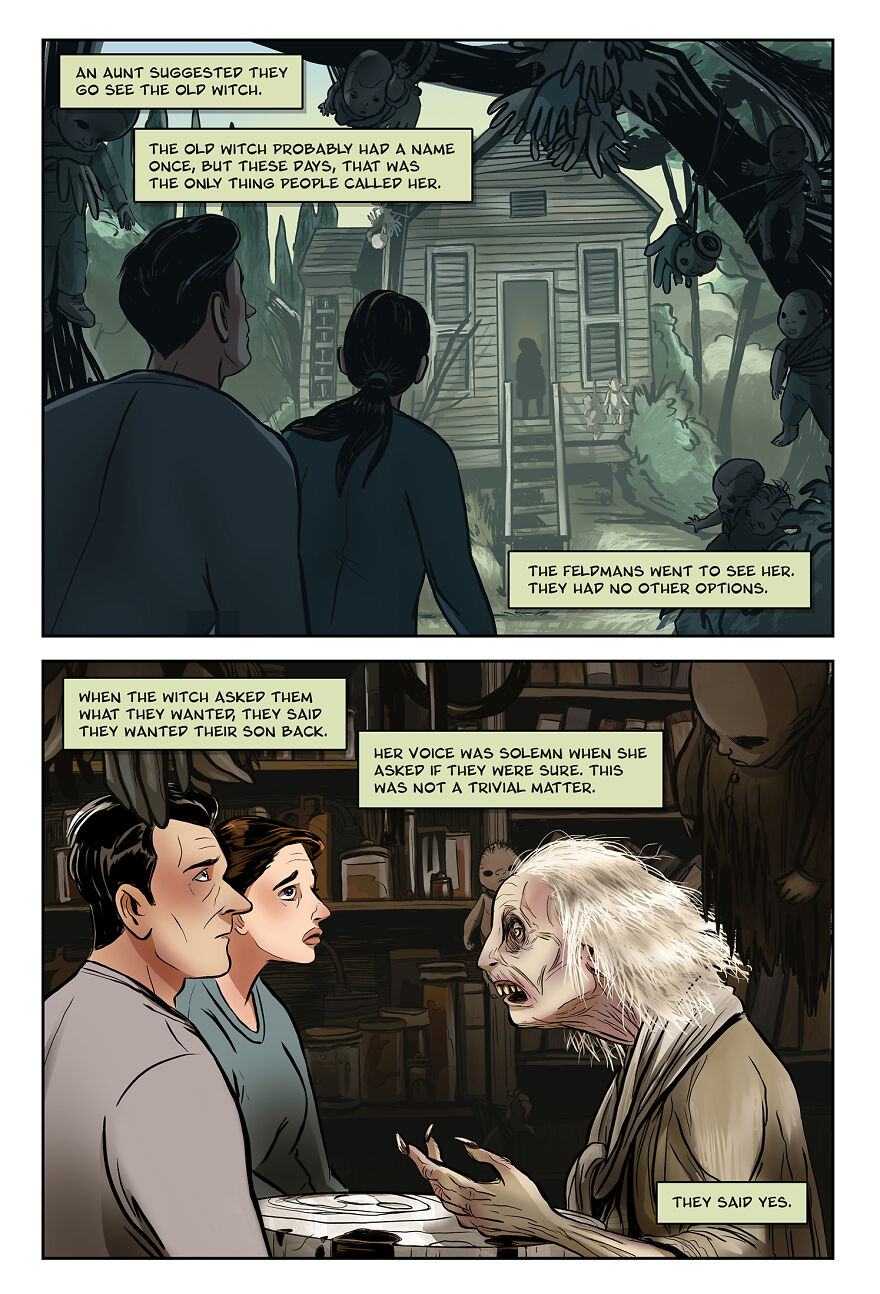 And the witch was only too happy to agree to bind them to something unknown. 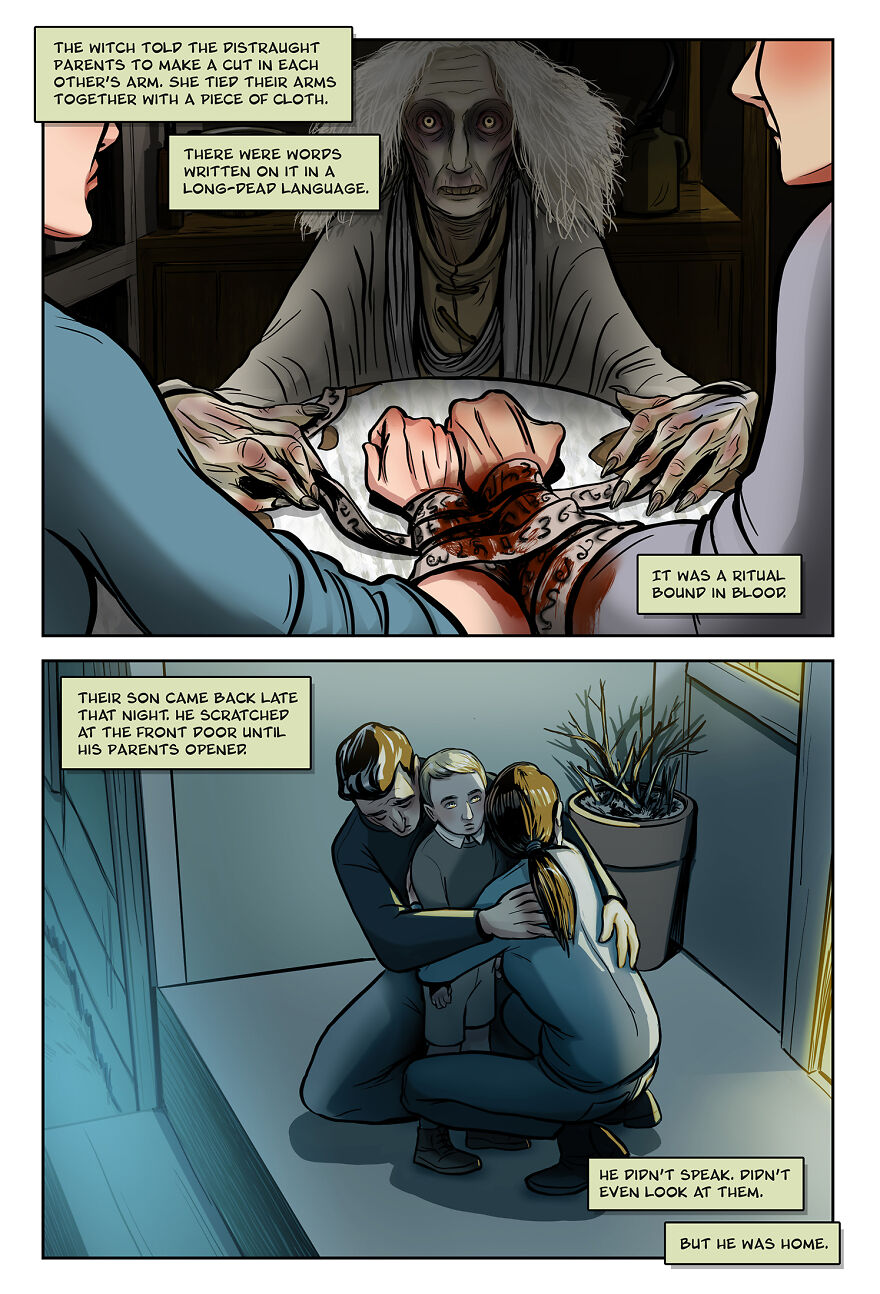 And they got what they wanted, their son but all was not as it seemed. 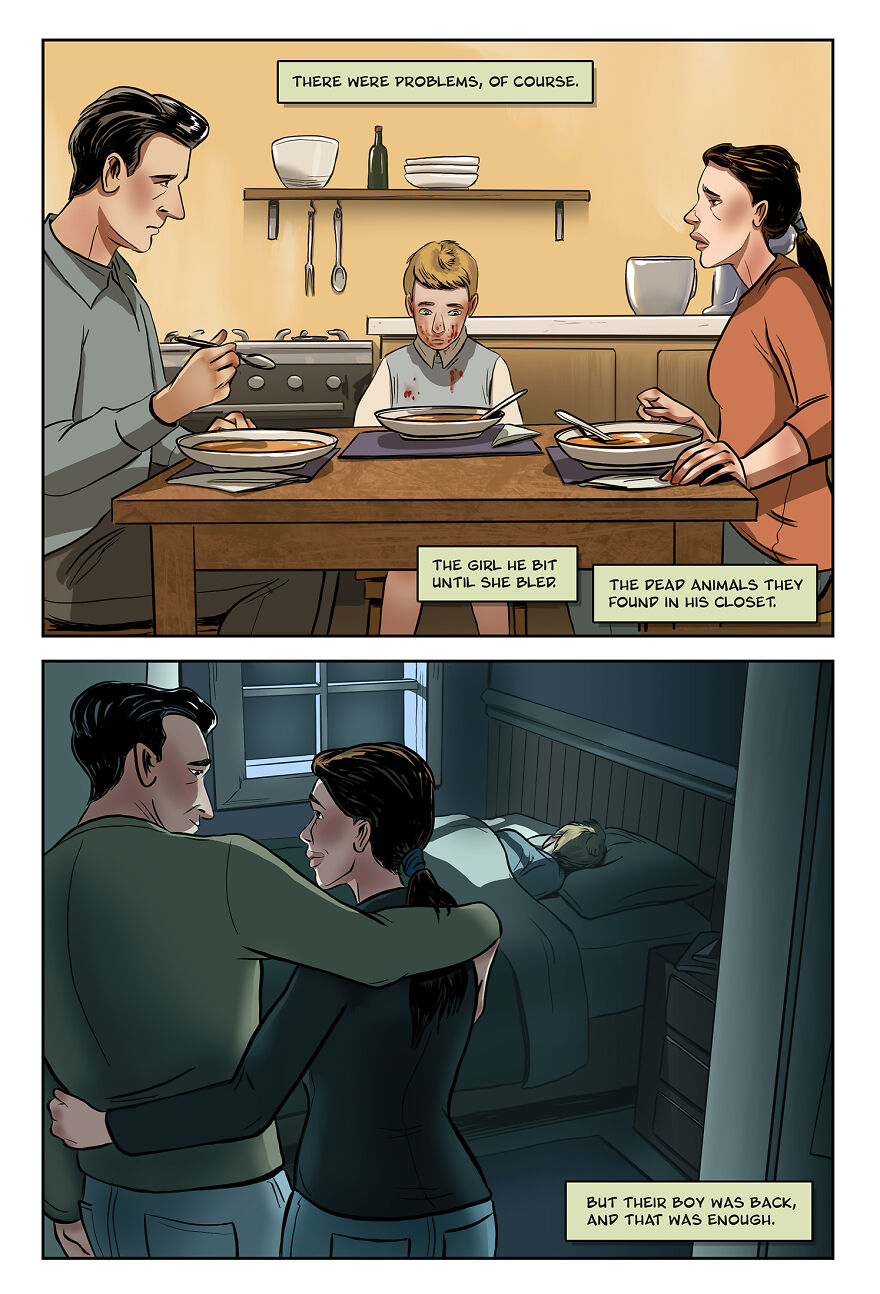 So when their actual son came back, they couldn’t realize what they had brought into their home. 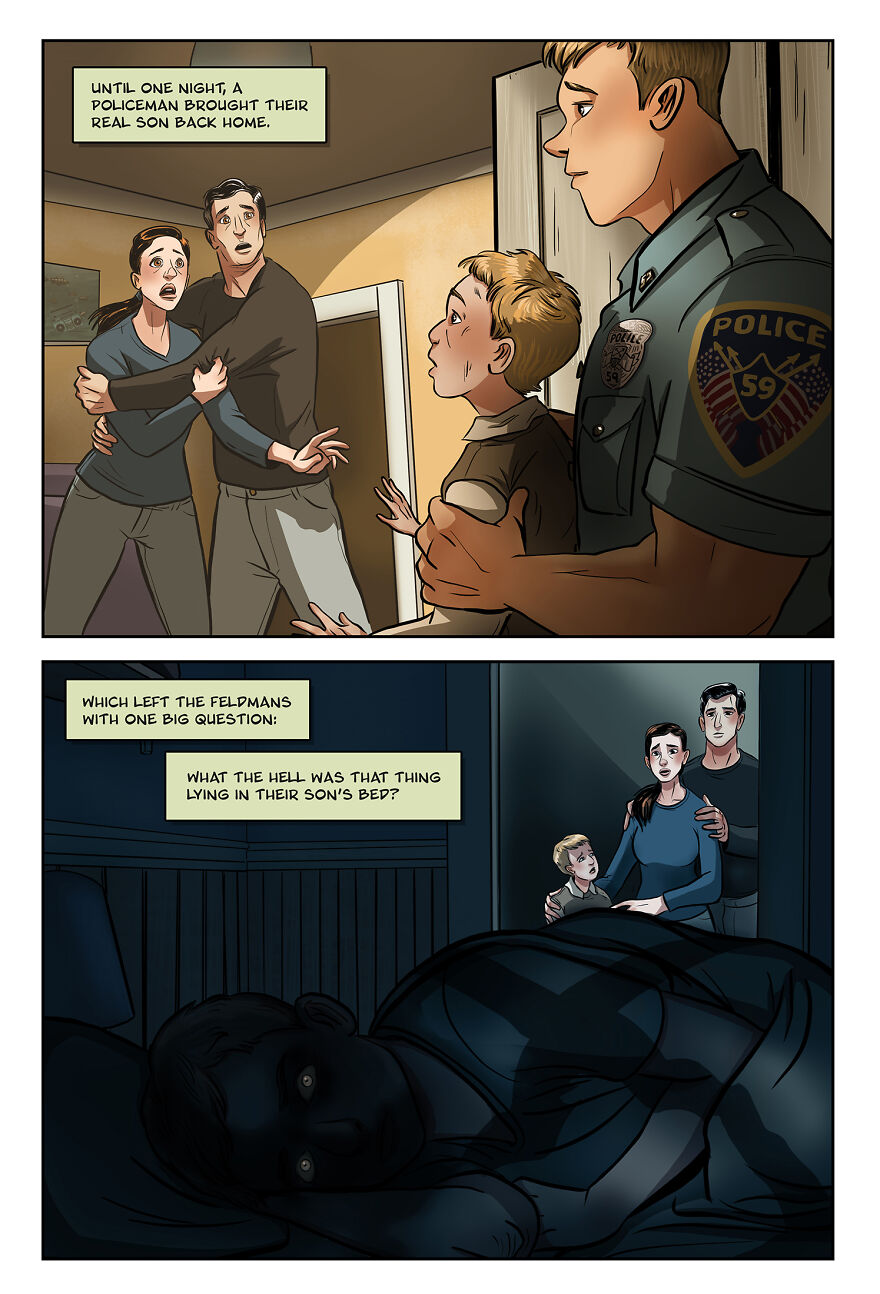 These are not the only comics they have created as they have many more which you can check out for yourself if you just take a look at their website. Not only that but you can also support their hard work by donating to their Patreon. Nonetheless, they do deserve all the appreciation that they get.

#3 It all started when a portal appeared out of nowhere. 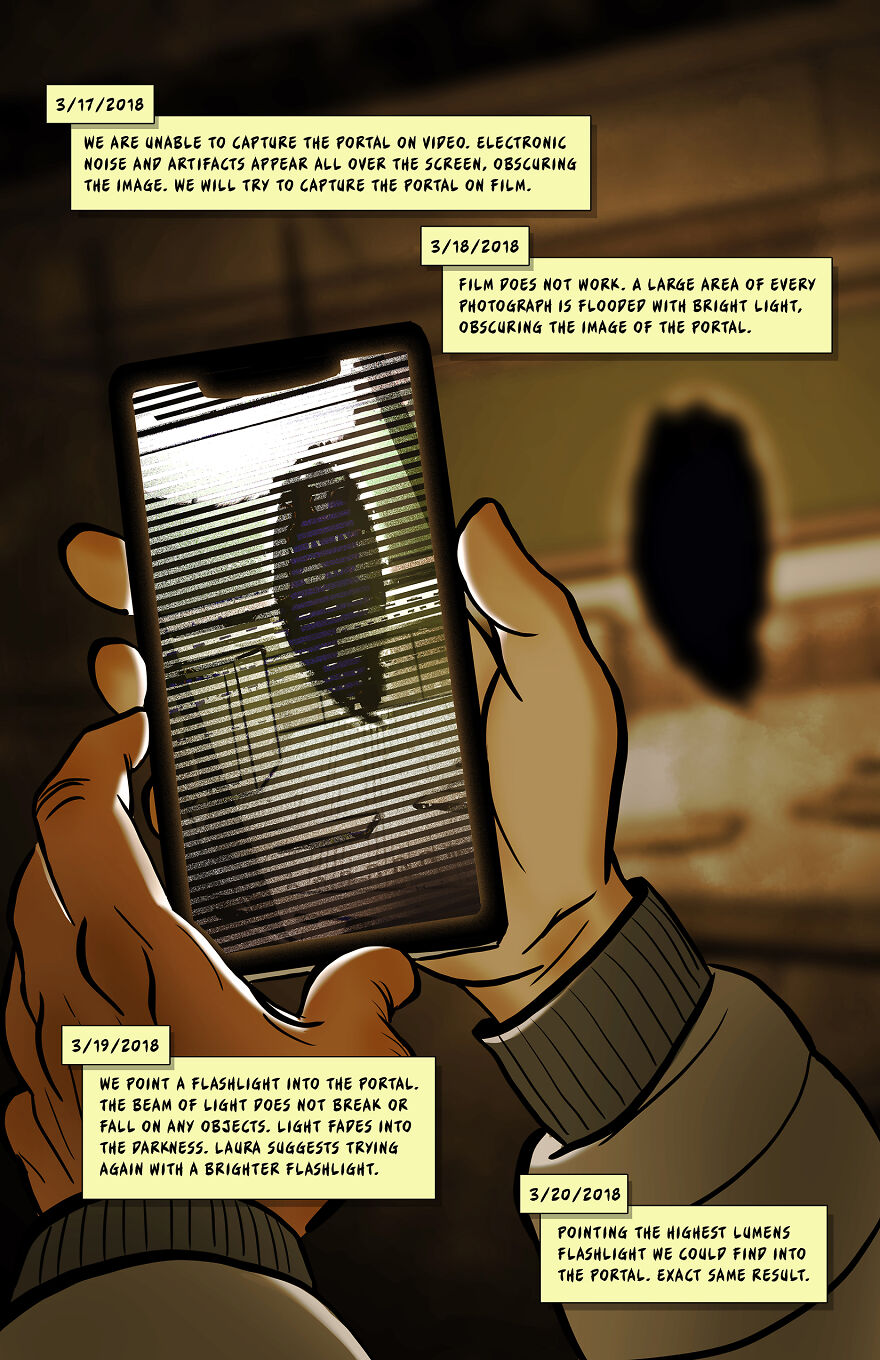 The team wanted to figure out everything that this held. 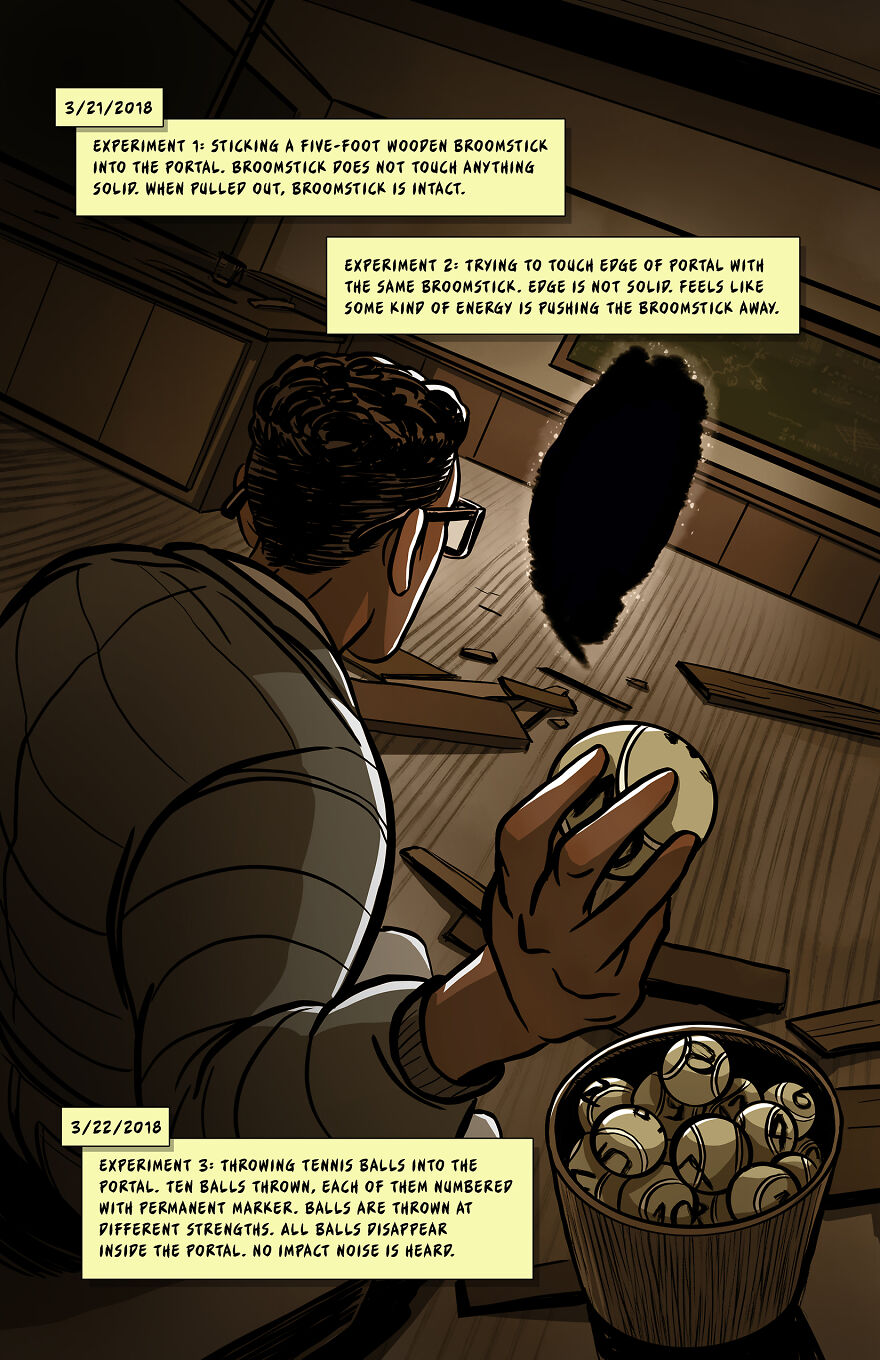 So their tried experimenting but all was for nought. 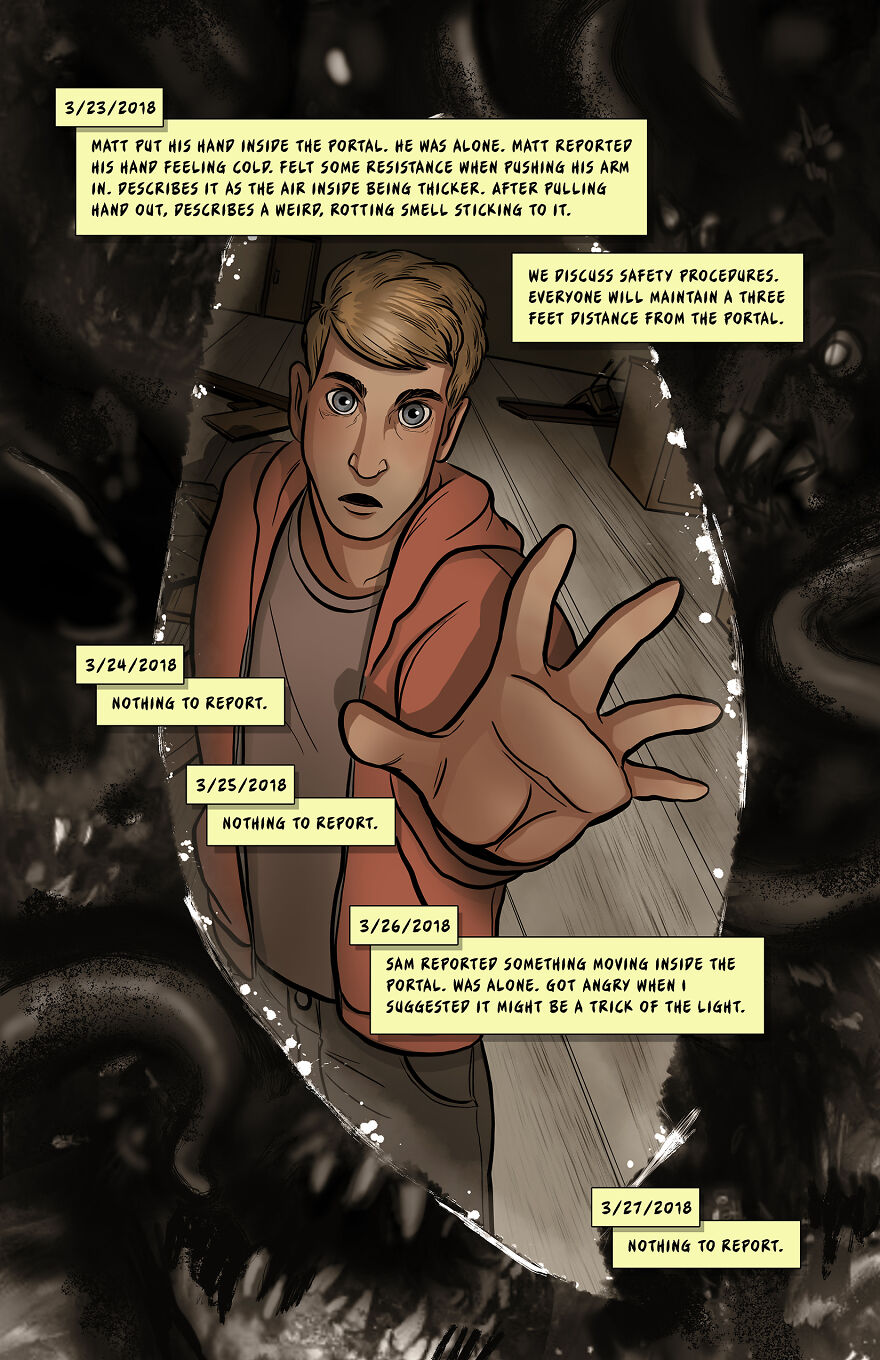 But things started to take a turn for the worst when a creature came from the portal. 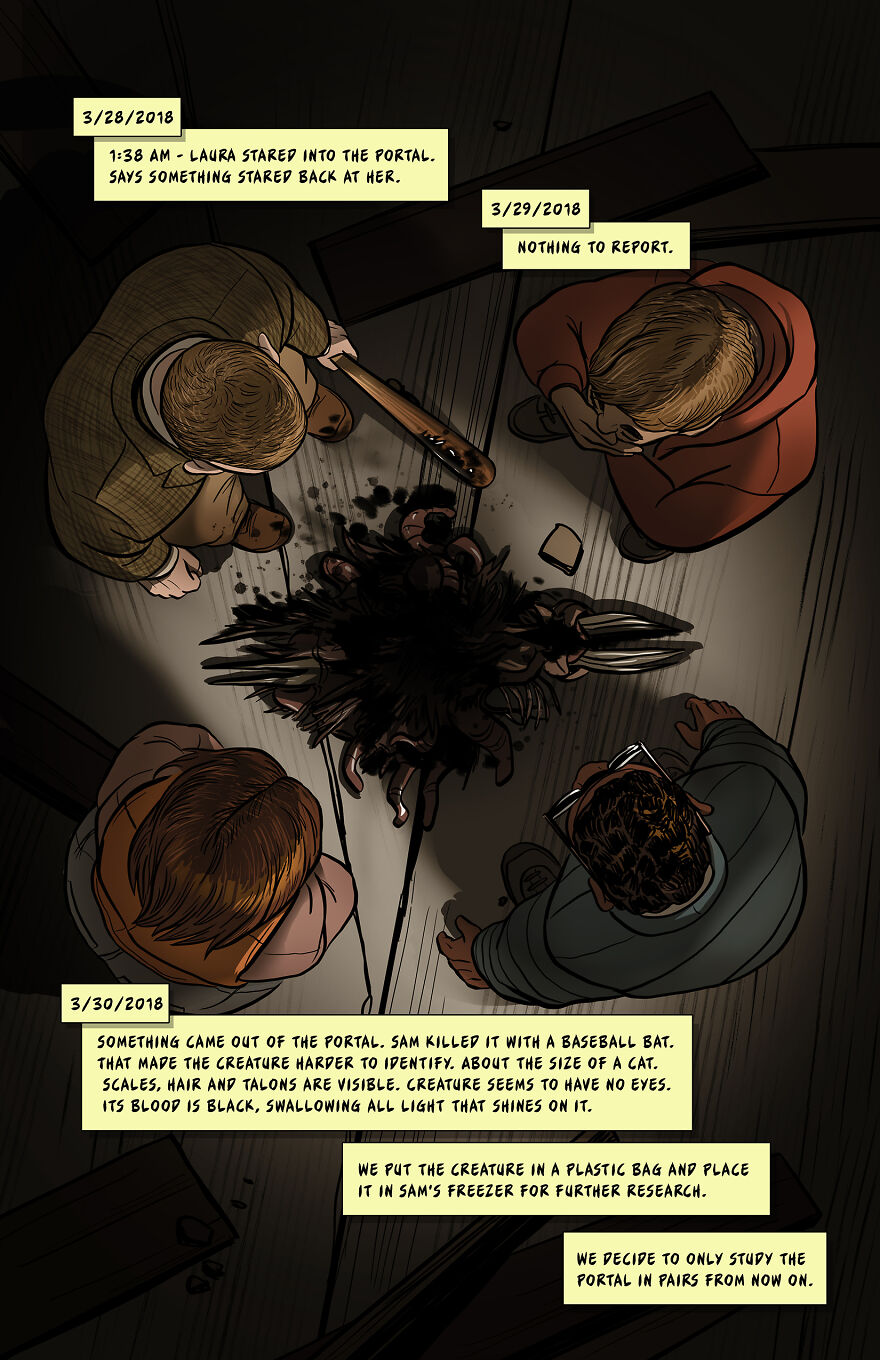 And it slowly started affecting everyone in the team. 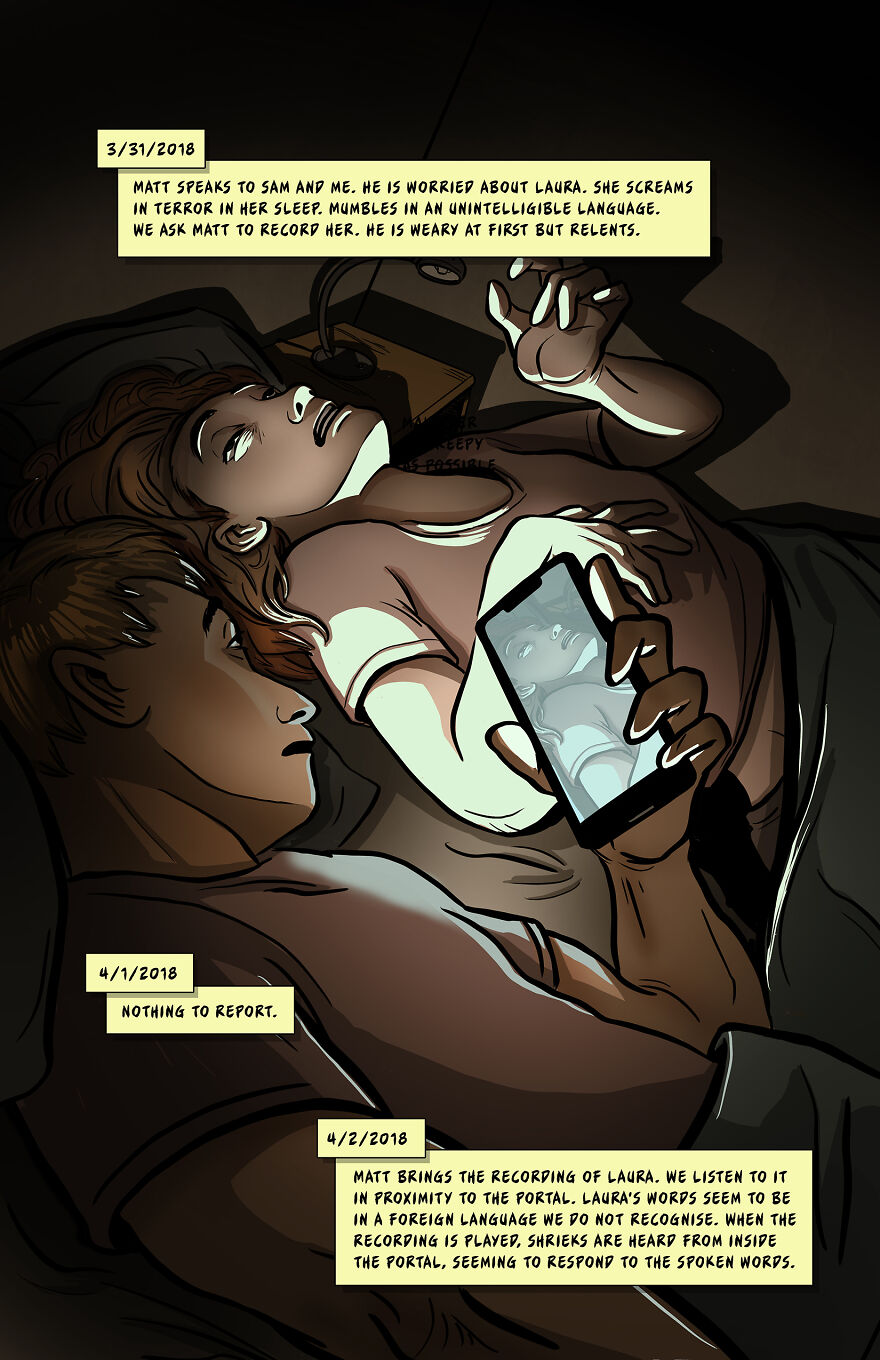 It seemed living things couldn’t stay unharmed once they went into the portal. 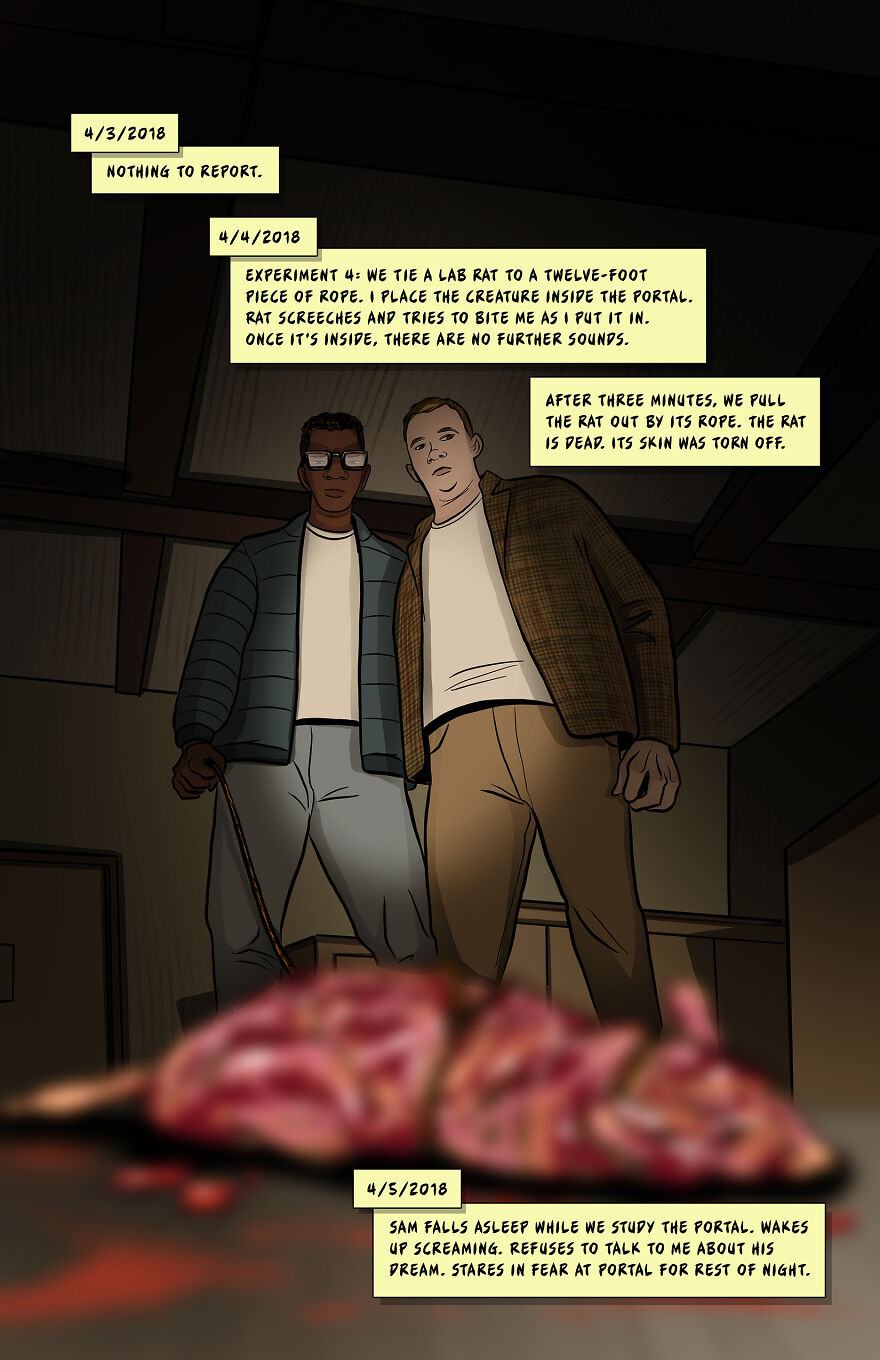 But Laura went ahead and entered the portal anyway. 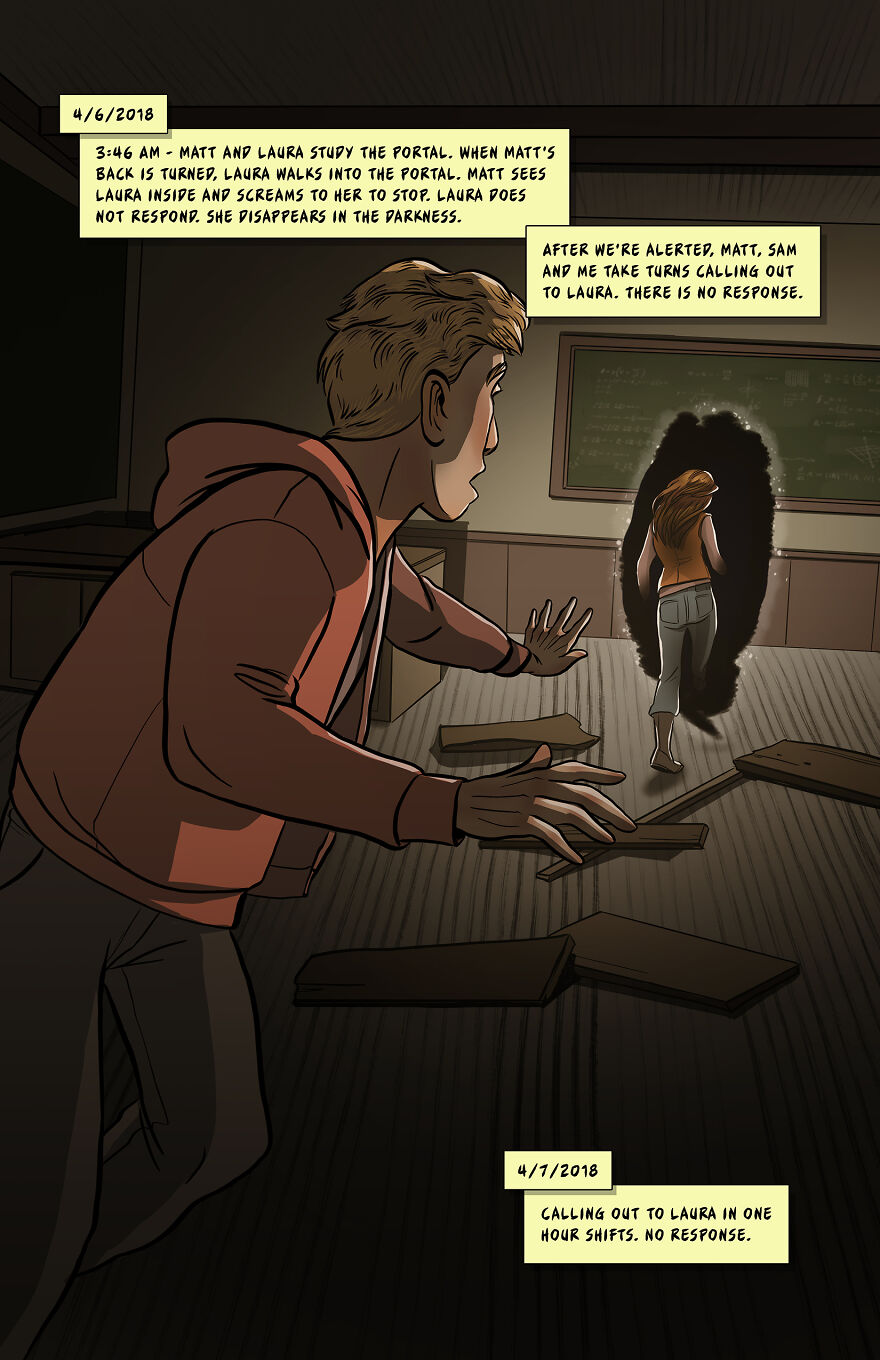 They couldn’t figure out how it all worked. 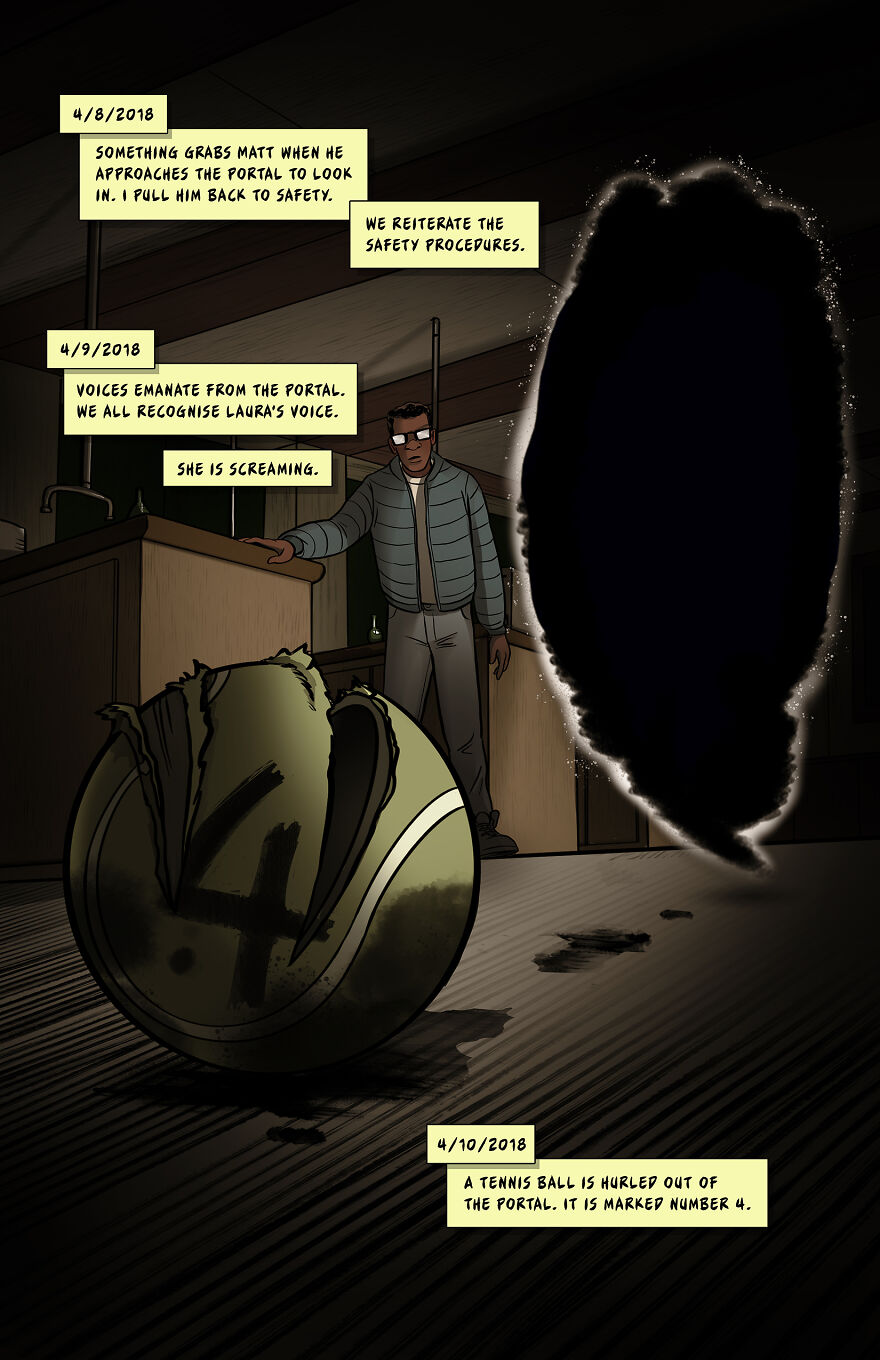 But that is when Laura stepped out. 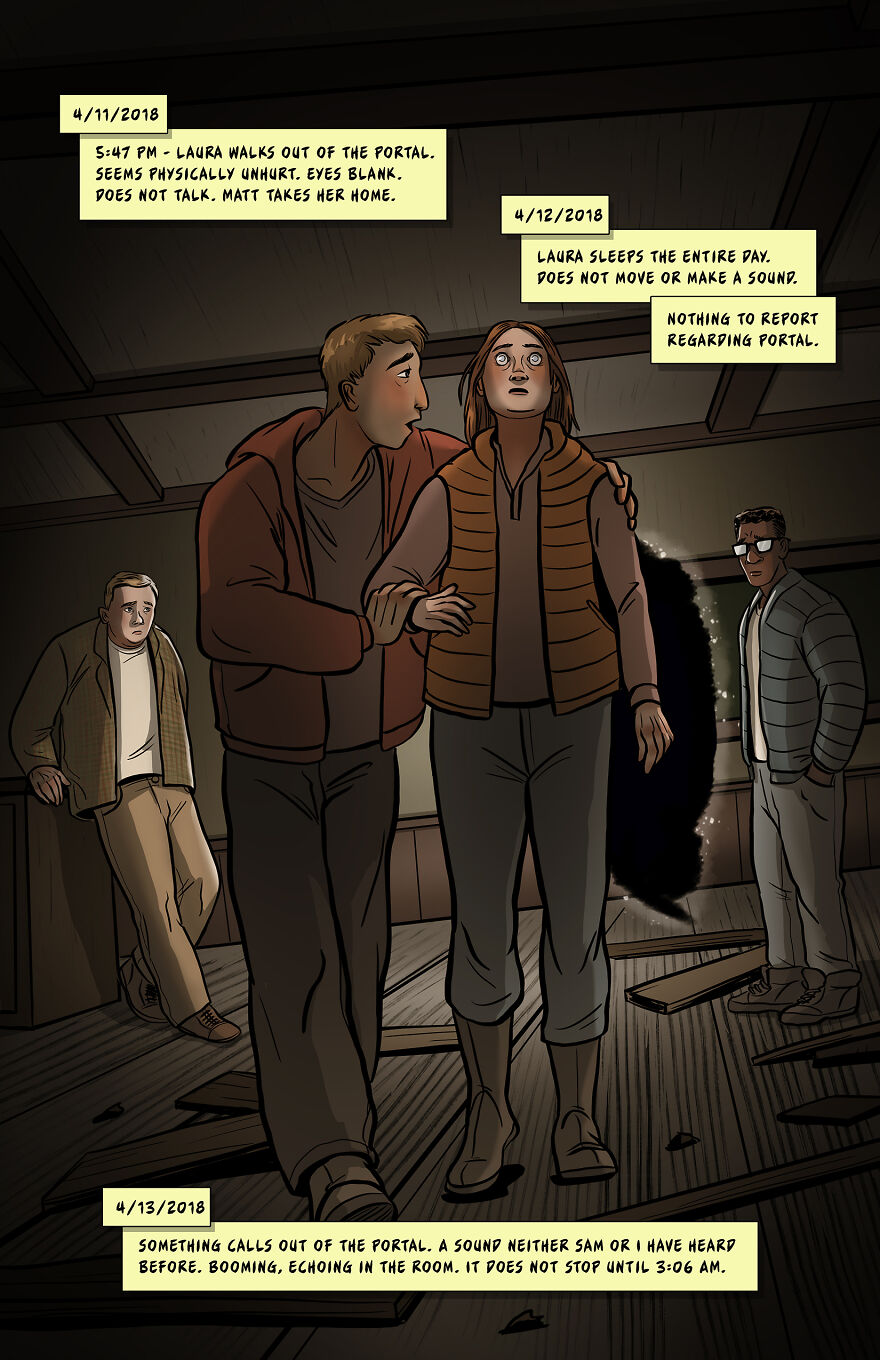 But it was not the same Laura that had stepped in. 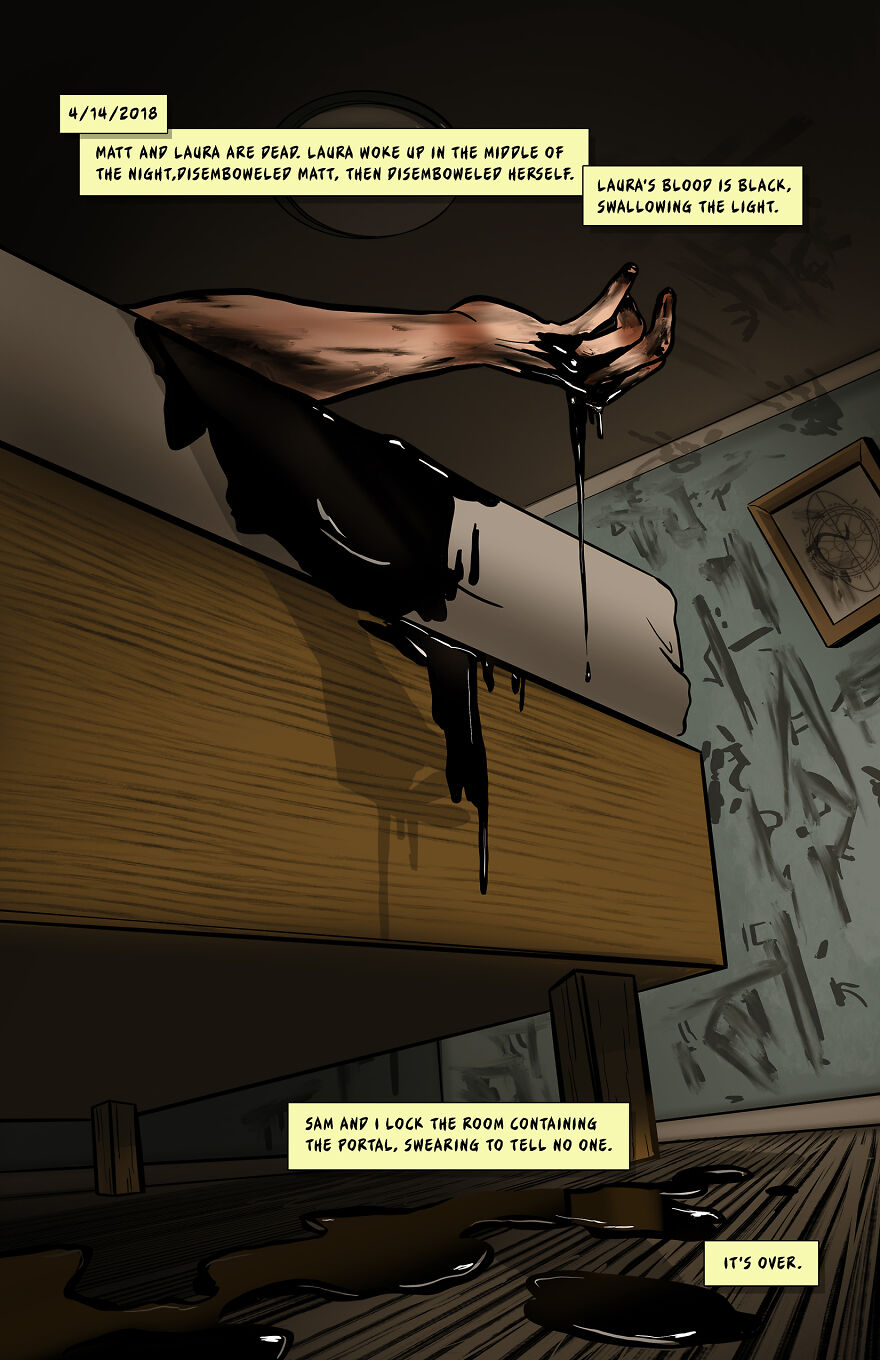 And things got even more terrifying as time went on. 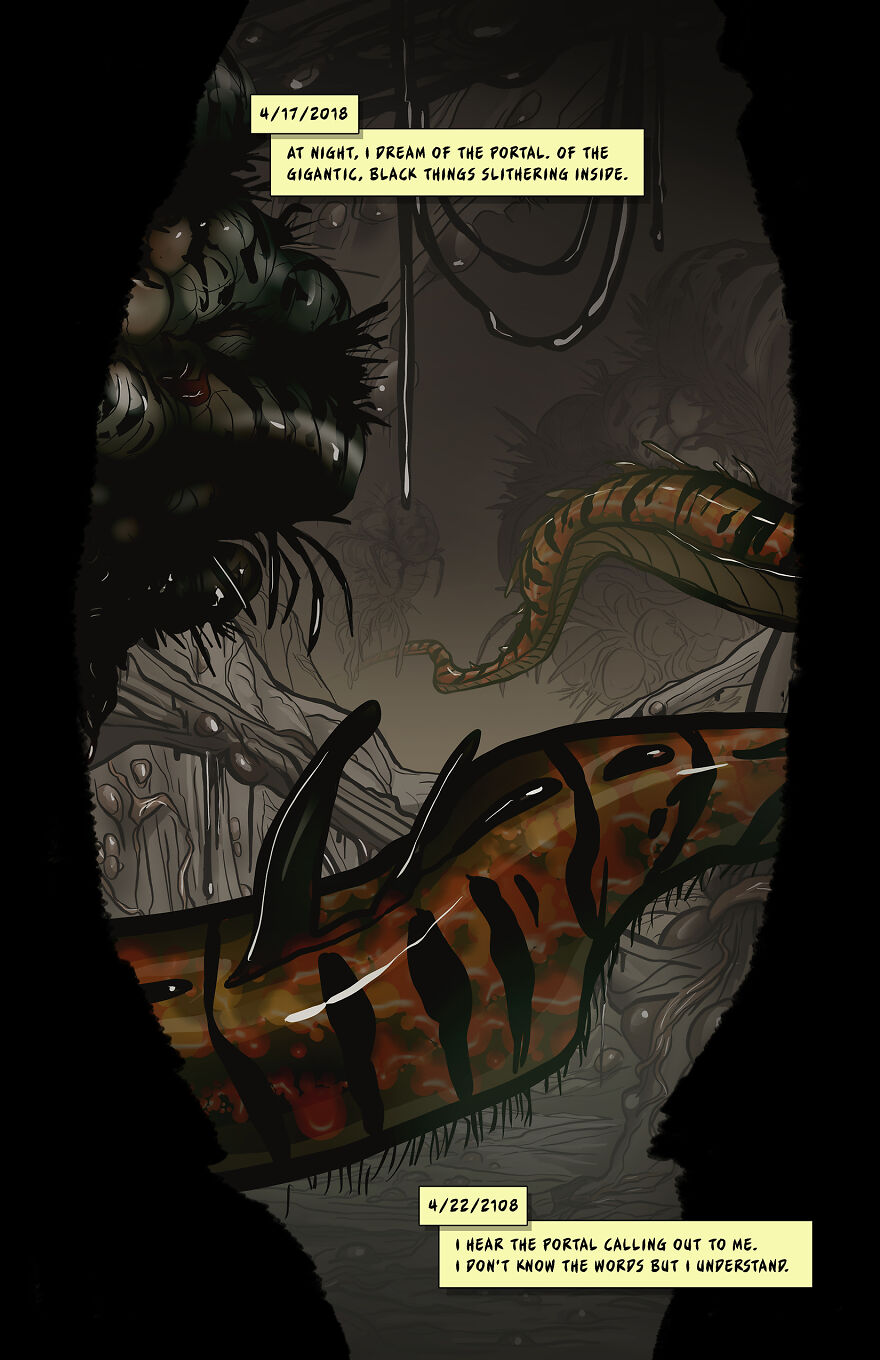 They wanted to leave it but something kept pulling the remaining two back. 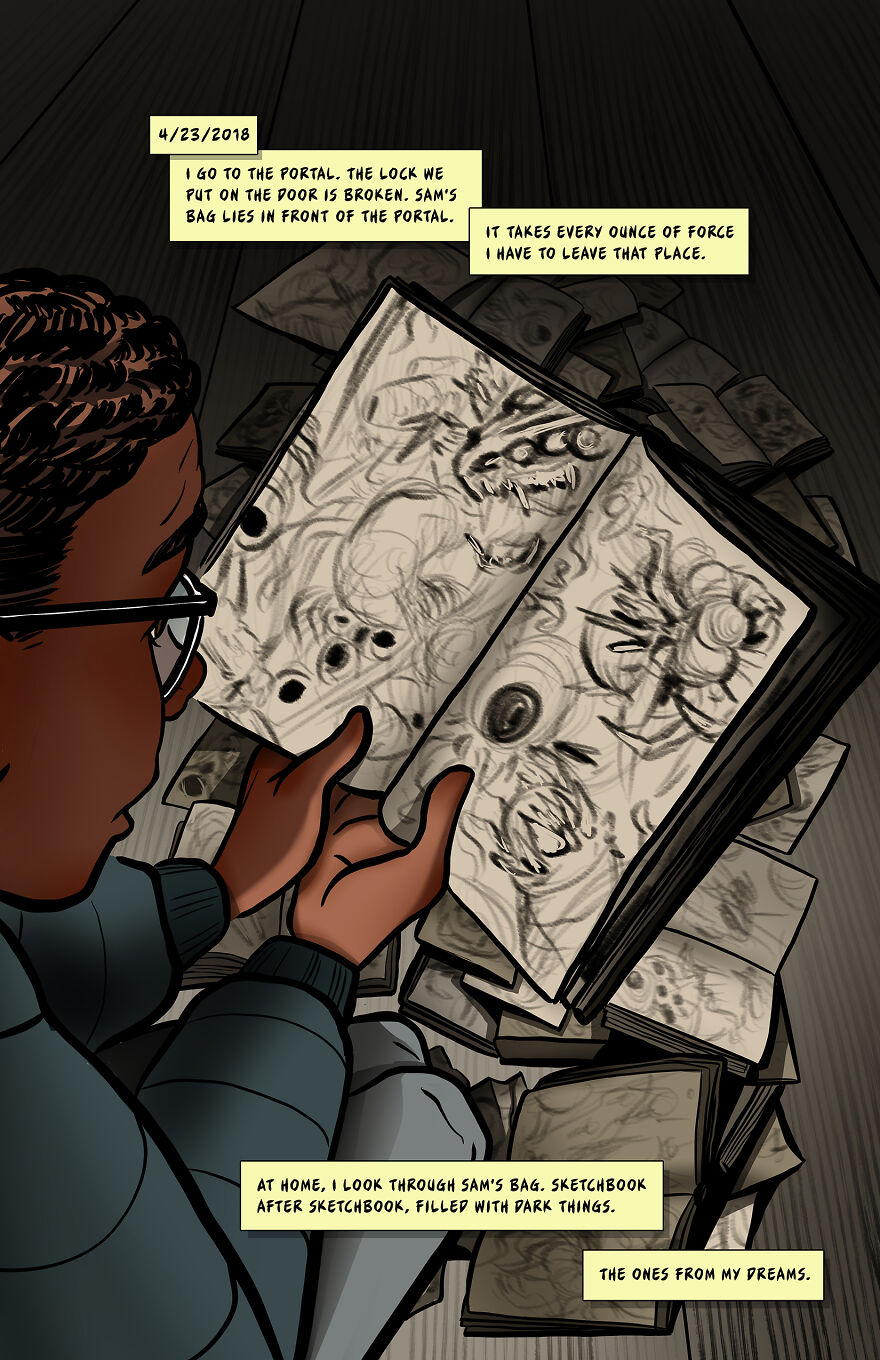 And thus at the end, the portal claimed them all. 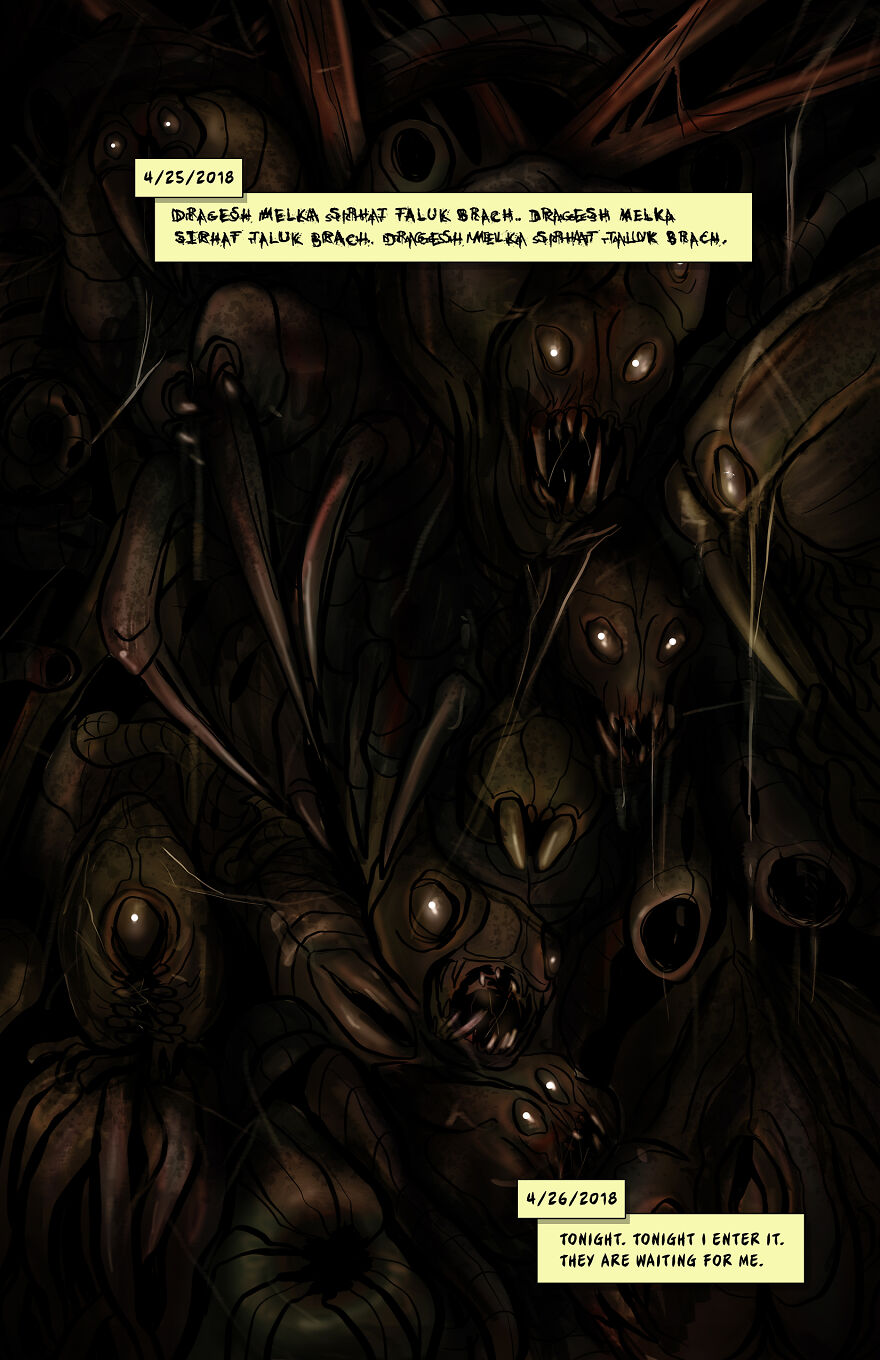 What are your thoughts on these comics? Let us know in the comments below. Did you feel satisfied with the endings? or did you want the comics to be longer?