This “vegan” person pissed the dinner host off.

When you are inviting someone to a party or an event that you are managing or hosting, it is actually a very nice thing to ask if there is something they require or something that shouldn’t be there. This can include food preferences and restrictions as well. It is actually a very courteous thing to do. Say you are inviting someone over for a dinner, it would be really nice to ask them pre-hand what sort of food-related allergies they have, if any, are they vegan, are they lactose intolerant, are they fasting, just anything. It makes the person invited to feel good and gives you a clear idea of what the many should be for the night.

In today’s episode of AITA, this woman went an extra mile for this one guest who was a vegetarian. She made meat dishes for all the non-vegetarian guests and made vegetarian dishes for that vegan person. She did that as a gesture to not make that vegetarian person feel excluded. But to her surprise, that vegan guest actually started eating food from the meat dishes available. She did all that so he could eat what he likes, yet he just confused the hell out of everyone and fully pissed the OP.

Scroll down below to see how all the drama went down!

Oo, that sounds very delicious. I want my friends to invite me to a roast dinner as well. 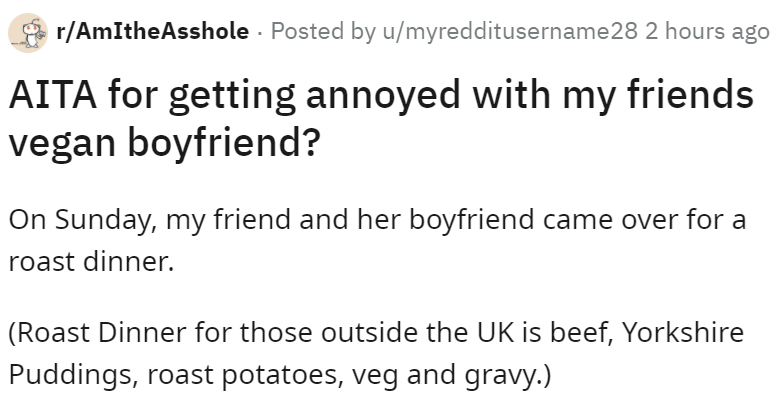 That is actually very thoughtful of the Redditor.

Guests are your responsibility and you shall make sure they have a good experience.

That is kind of weird.

So is he not vegan? This could make anyone angry beyond belief.

What do you mean it doesn’t matter. That woman spent cash and hours to cater to your vegan ass.

Can you guys guess who the real asshole was in this situation? Try it, it’s not hard at all.

The Redditor asked the company and said that they will apologize if the majority thinks she was wrong for being annoyed at a vegan guest who demanded vegan food and ended up eating meat meals. And the community responded, united as one.

This person called the vegan guy a fraud.

How can veganism ever benefit you? Dude, this person is such a sore loser. 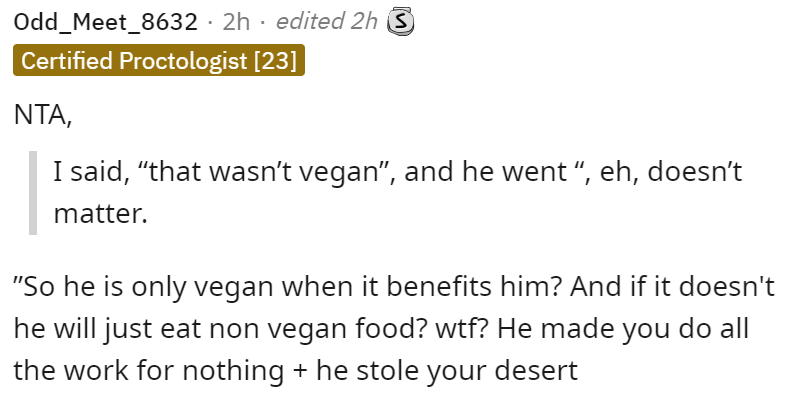 You are not an asshole for going out of your way to buy pricey food for them, which they never touched.

Even the vegan said she was NTA.

That’s a great idea actually, throw bacon strips at them.

Here’s our verdict: OP was not an asshole for being mad. Like I don’t think I need to explain my position on this one, it is so clear that her friend’s boyfriend was so rude about it and didn’t acknowledge all the hard work put in whatsoever. This person actually got on my nerves as I went through the story. They should be attacked with bacon strips, that’s how they should be dealt with.

Anyways, now the ball is in your court. What do you guys think? Was she an asshole or not? Share your thoughts in the comments section down below.