Sometimes you have to take matters into your hands.

I am sure every one of us has had those moments where we want to rip the heads off of annoying customers. I know this sounds drastic but after you’ve had an already bad day and then having to deal with a person who just wants to make it even worse makes you want o quit right there and then. This especially holds true for people in the foodservice industry as so many people seem to think that these employees aren’t even human and that one can treat them as horribly as one would want.

After all, there is no end when it comes to stories like these. So it is always nice to see someone getting their comeuppance. And while I do feel a tiny bit of satisfaction, the fact that most of the time the manager does nothing and lets the customer berate the employees is just not okay. I understand that the manager might have been told by their higher-ups to not a big deal out of this stuff and let the Karen have free stuff but doesn’t the employee deserve some justice? Well, today you will get just that.

So take a look by scrolling below.

Are you ready to feel an immense amount of satisfaction?

We get right into the background of this person and how she always used to be this way. 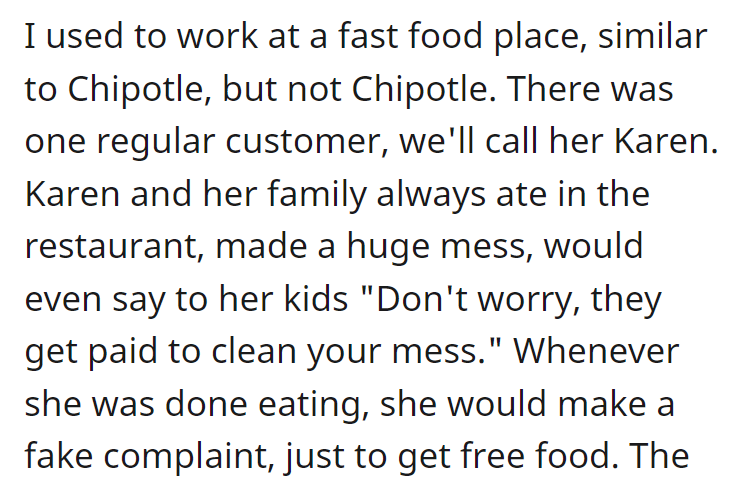 She would always make a mess and then leave but not without making unnecessary complaints. 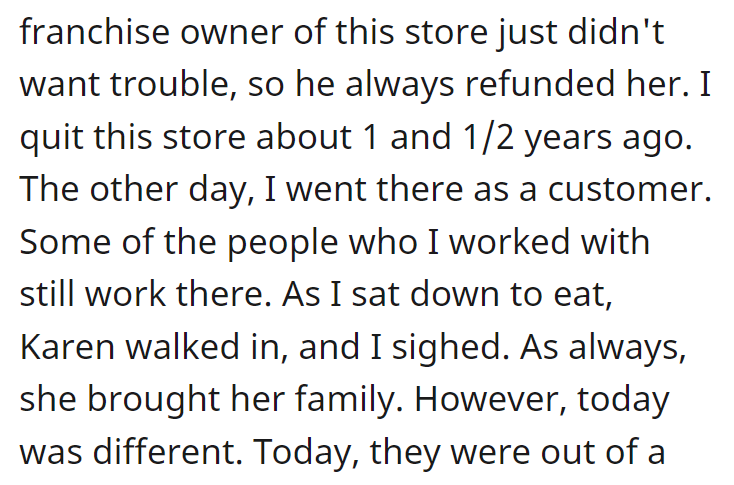 She wasn’t even above berating the employees for something that is not even in their hands. 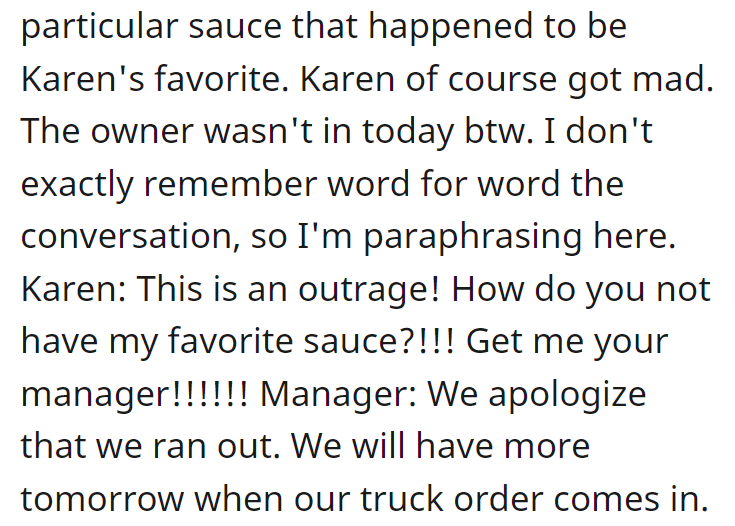 This time, however, the ex-employee wasn’t going to let it go, so they stood up and made everything perfectly clear. 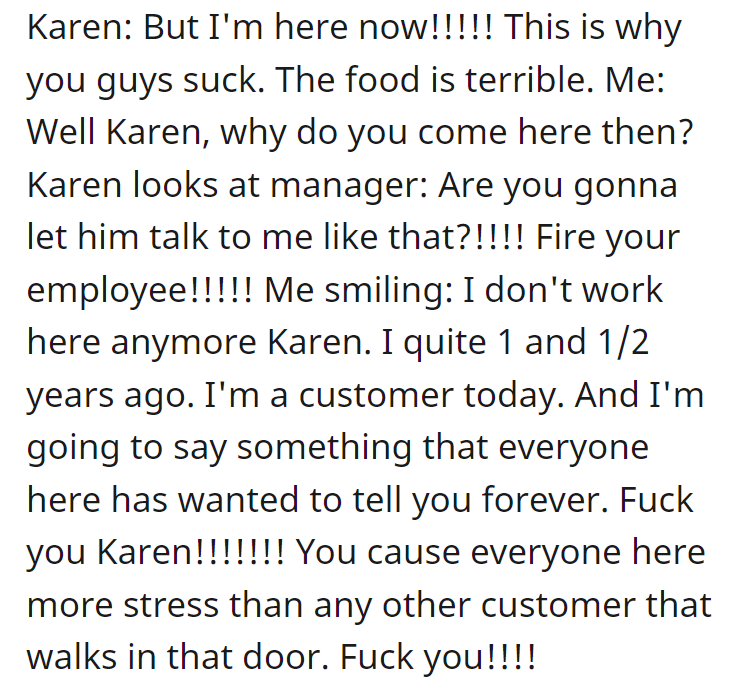 The employees couldn’t have ever said anything to her in fear of losing their job so this was the only way. 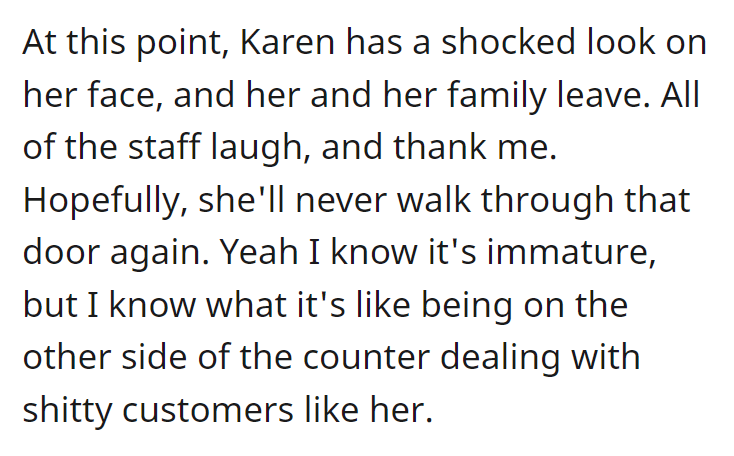 I never understand why people think it is okay to make a mess at a restaurant. I get that going to a restaurant can be difficult when you have kids and it isn’t always easy to tell your kids not to make a mess but this also reflects your parenting style. And if they have thrown a few things around, one should always pick up after themselves. This woman, however, did none of that and taught her kids that acting like an a**hole is perfectly valid.

People like these definitely deserve to have some sense talked into them. 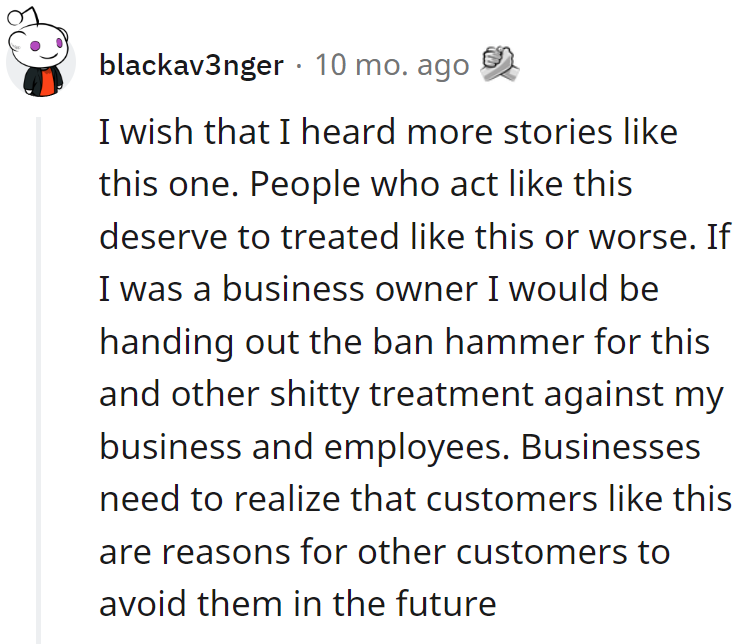 This solution doesn’t sound too much at all. 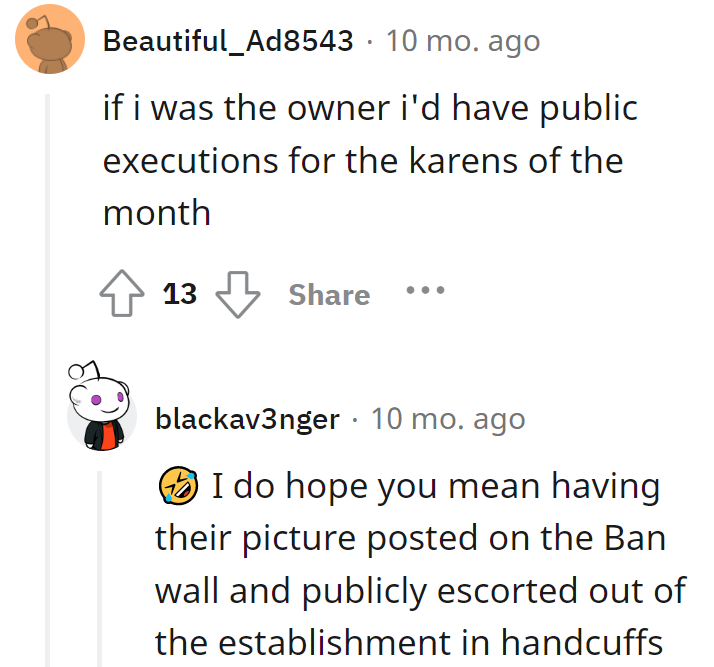 The poster later revealed the actual name of the company as well. 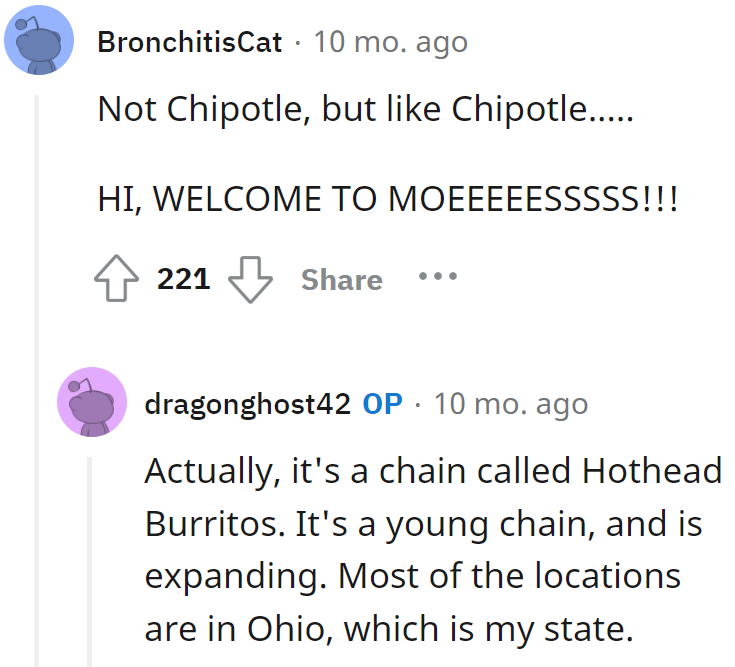 People from all over the world have come together to bathe in satisfaction. 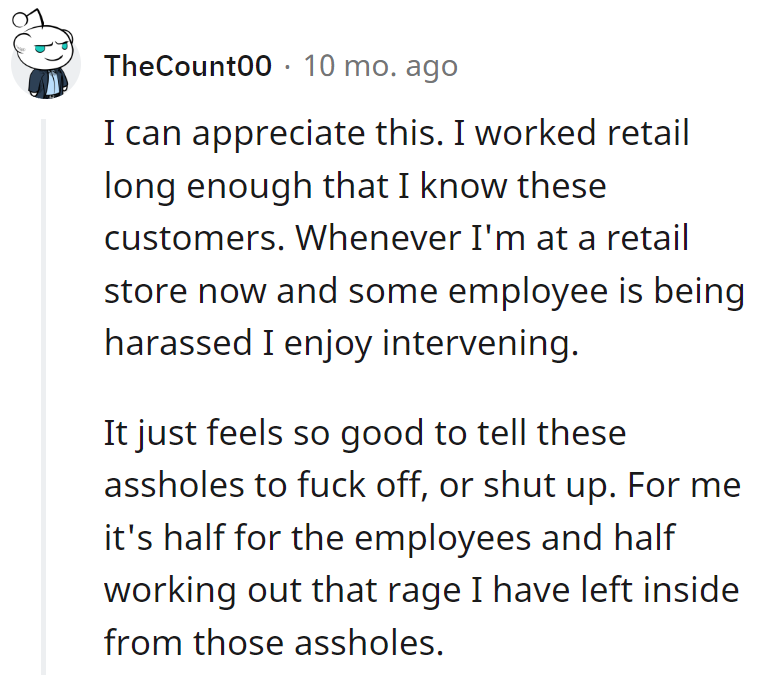 They might shut up but that doesn’t mean that they understand what they did wrong. 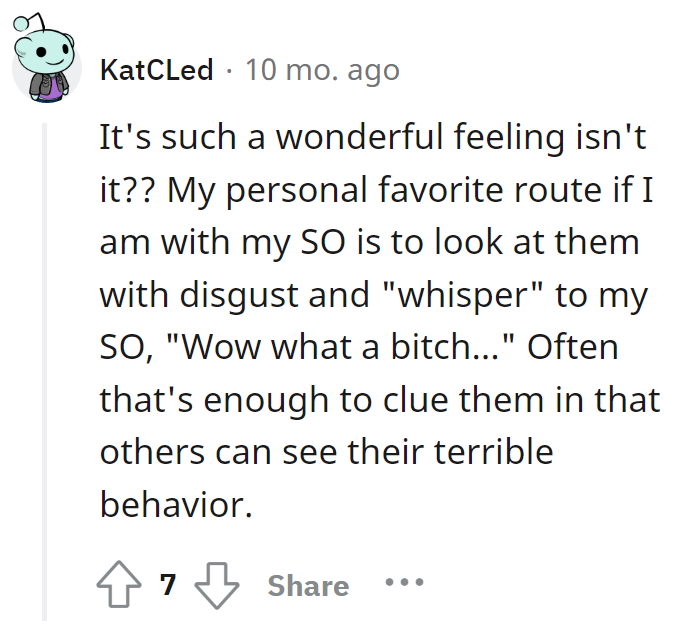 Sometimes you do feel like defending employees from the atrocities that these Karens inflict on them. 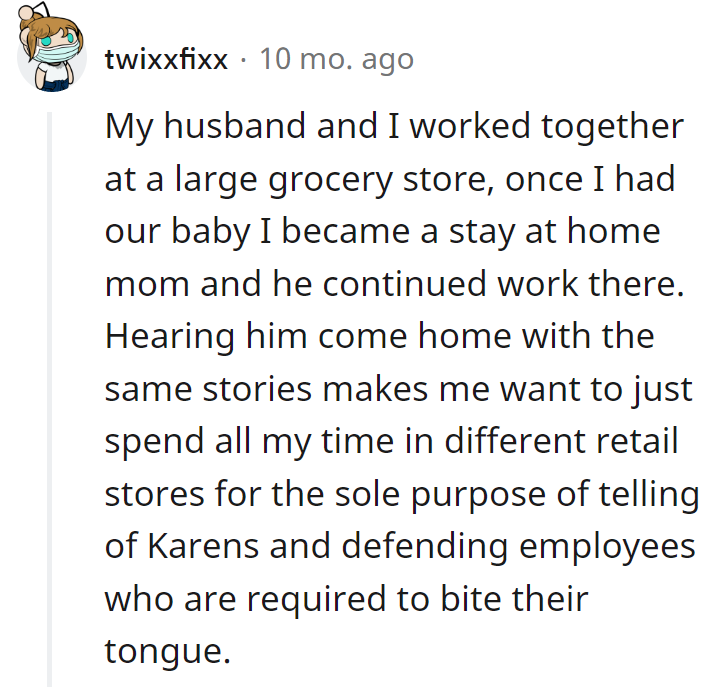 I would agree that the woman was a regular scammer and I hope she never goes back there again. 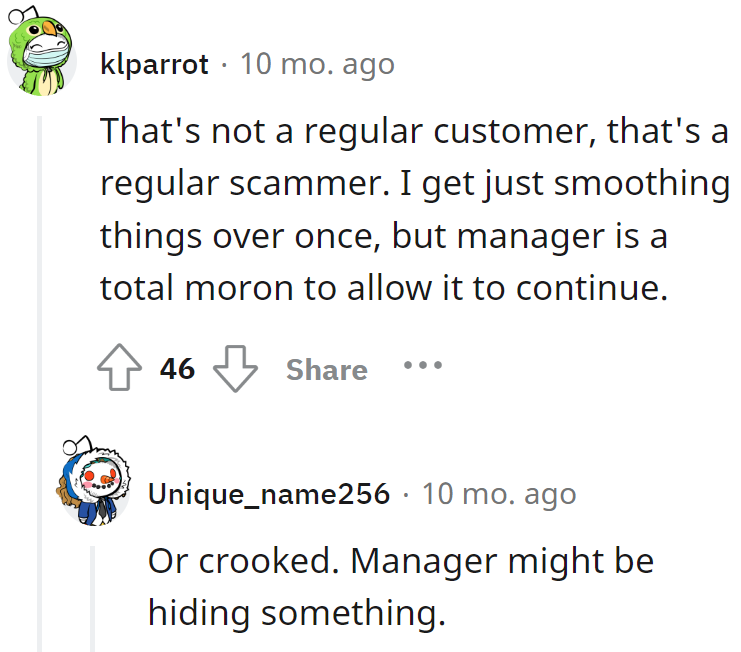 There was no other way that she could have understood. 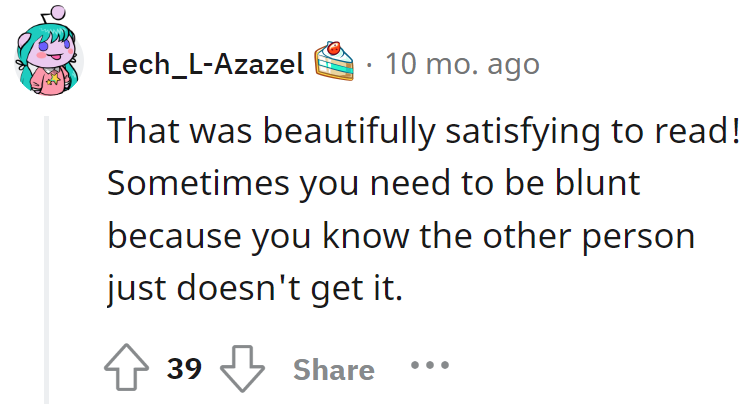 Who wouldn’t want to take revenge?

Especially since the managers don’t do anything. 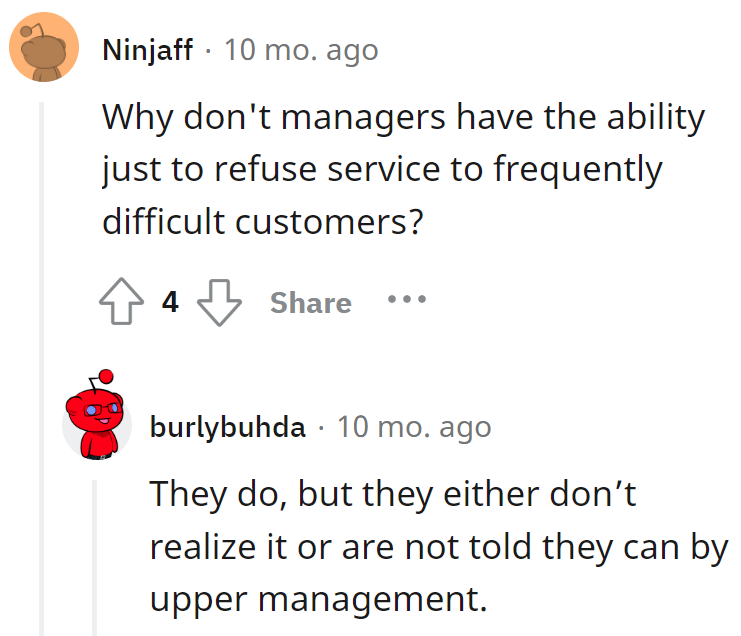 Have you ever done something like this? Or have you never had the chance to do so? Voice your thoughts and opinions in the comments below.