It is as if they have made an oath to make anyone who comes in their way feel miserable for the rest of the day. If I didn’t despise Karens so much, I would probably be impressed by the unending power that comes from their hatred. I am sure you have read thousands of stories of Karens ruining other people’s days by either mistaking someone for an employee or simply being an a**hole and refusing to apologize.

It is also no surprise at all to see that Karens are not only usually racist but you can also add a few more negative ‘ists’ with that. And that is where this particular story comes in. I mean what would you do if you mistook someone for an employee or your food delivery guy? Wouldn’t you just feel embarrassed apologize and then move on? That is what most people would do after all. Not Karens however, as they always seem to double down on their mistake and yell at others till they bow down.

Scroll below to see what I am talking about.

The part where the original poster says that he is brown may not seem like relevant information but you will understand why he told us this. 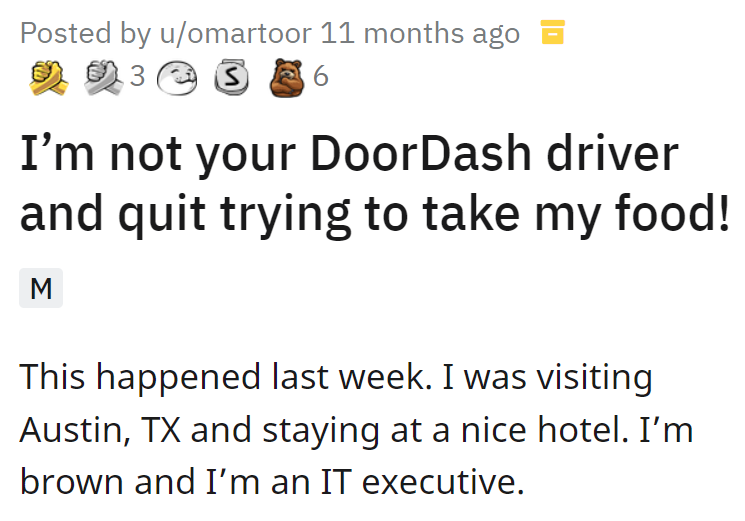 Things seemed to be going okay for this guy until he had the misfortune of meeting this particular group of people. 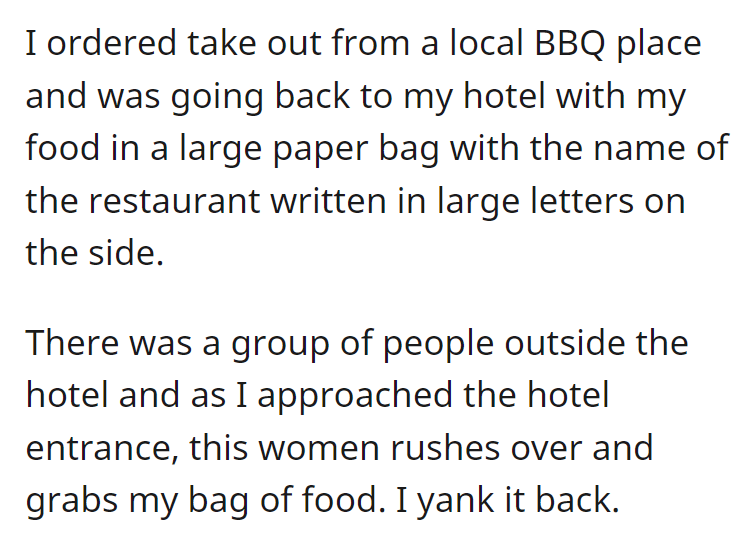 Rather than simply letting go, this woman keeps trying to yank the food away from him. 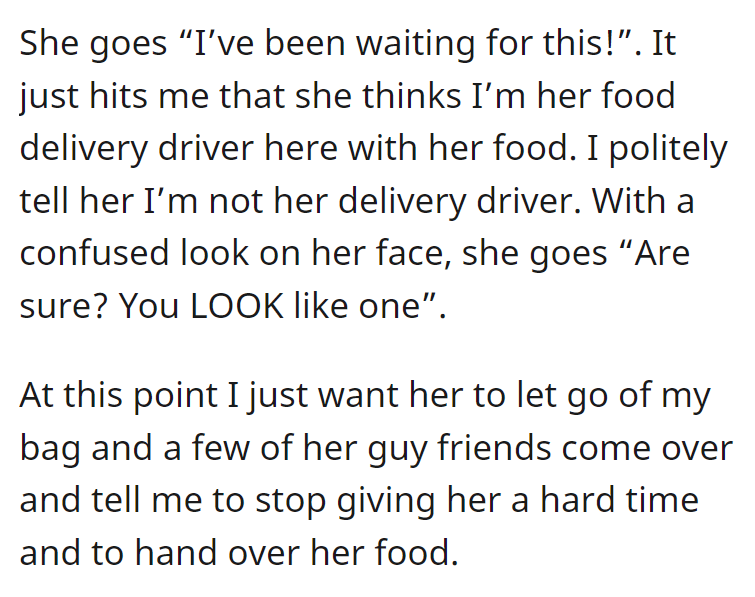 How does one ‘look’ like a delivery guy? Do all delivery people have some sort of tattoo on their face that they make food deliveries for a living? I mean, honestly, how would one know? it wasn’t as if he was in any sort of uniform or wearing a cap that said a food company’s name. It is quite clear that the only reason she made that comment was because of his darker tone and I have no idea how to unpack that.

She even resorts to threatening him when he doesn’t give her ‘his’ food. 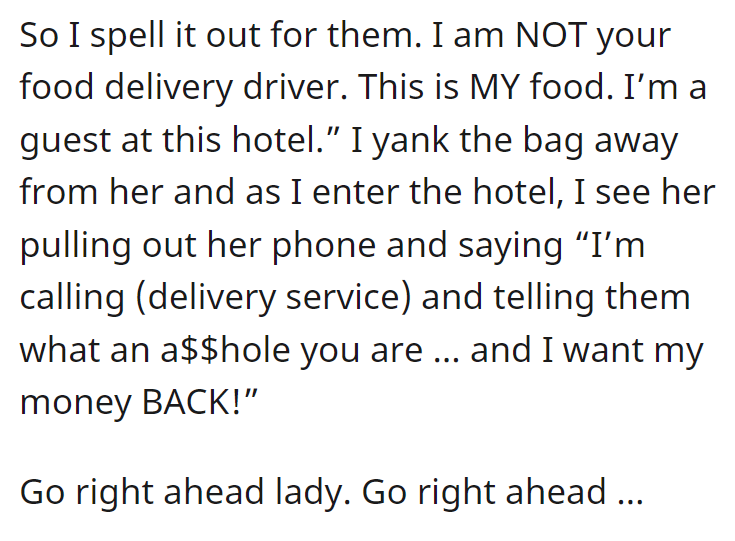 He even thanked everyone in the comments for being so kind towards him. 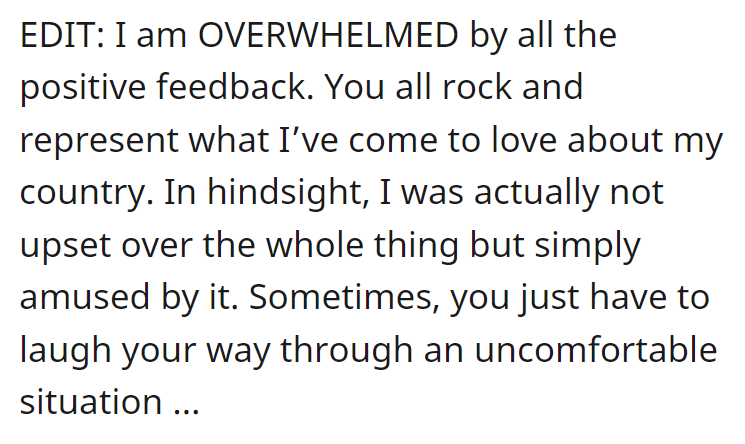 This person was quite curious to know what happened to the actual delivery guy. 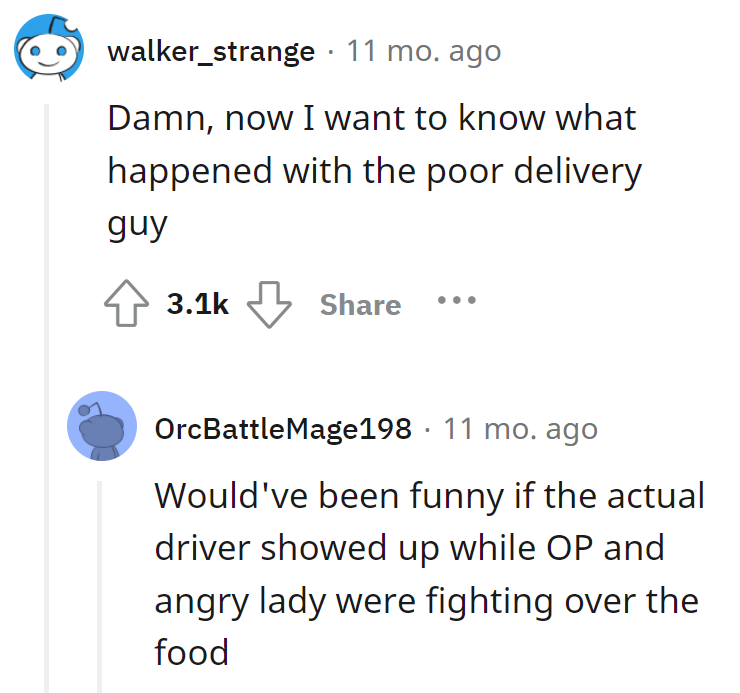 And it stands to reason that the Karen must have given him a bad review for no reason at all. 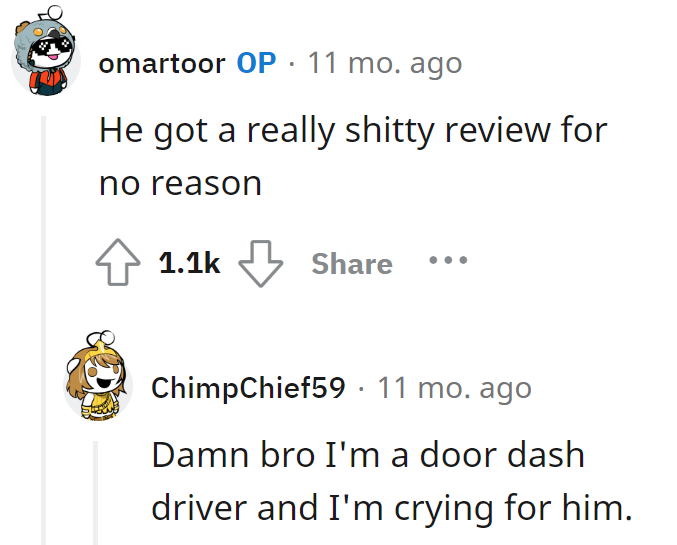 I can only hope that the delivery guy didn’t have to face her wrath. 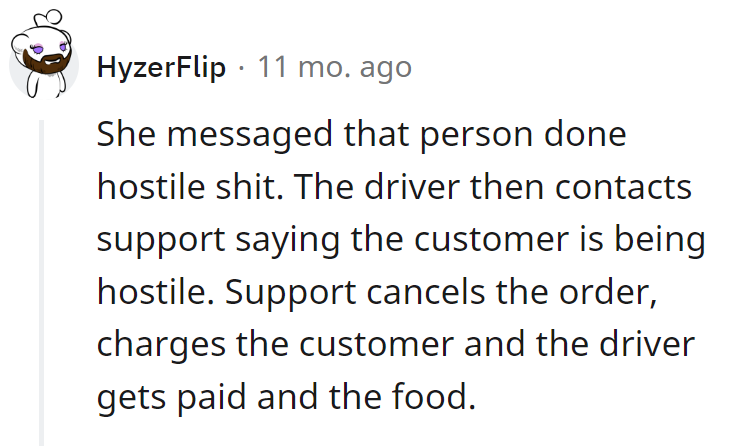 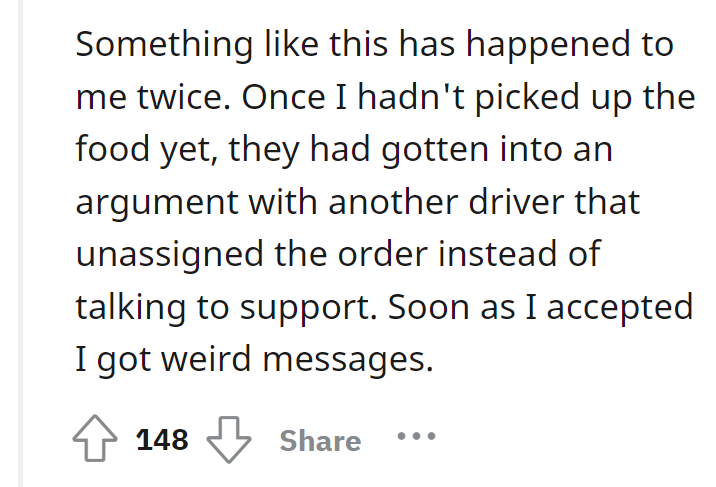 All of this honestly depends on what she did afterward and whether the delivery guy got paid or not. 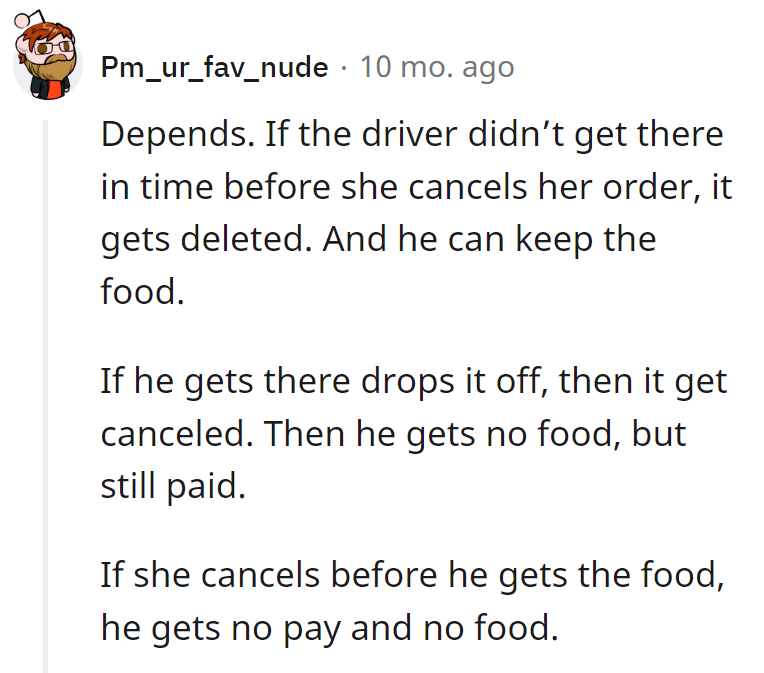 She might have assumed that he had short-term memory loss or something. 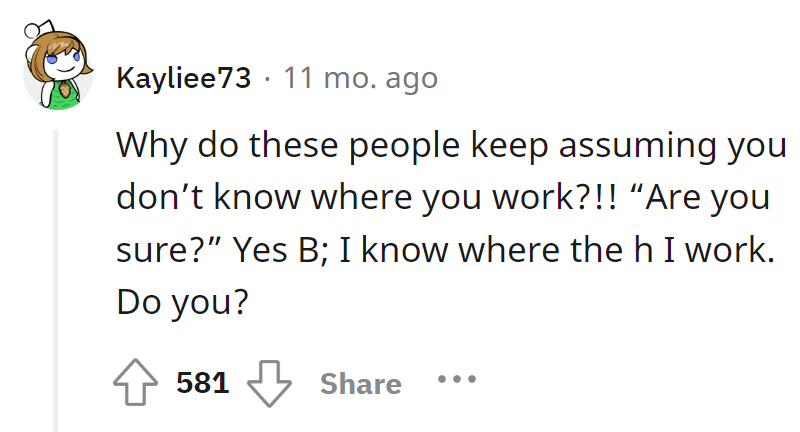 Some people just don’t want to read at all. 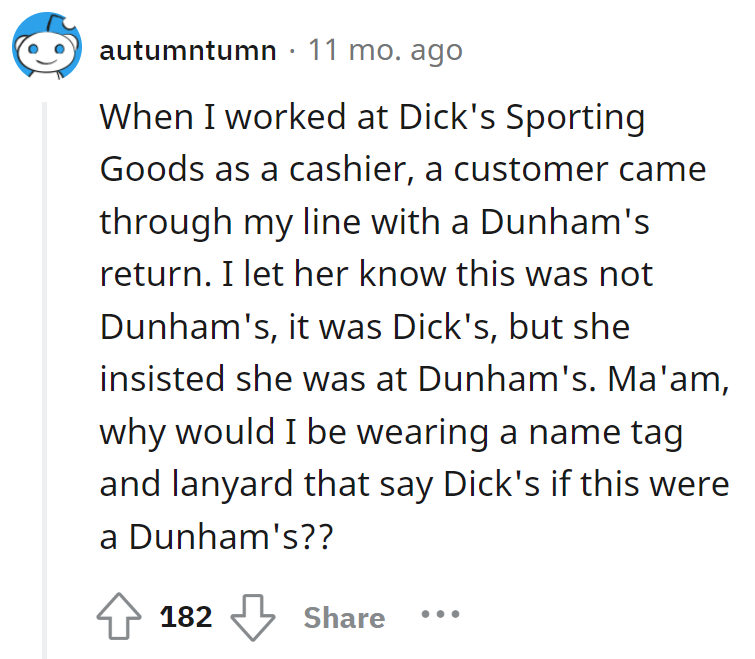 I can understand making a mistake but coming off angry right at the start is just dumb. 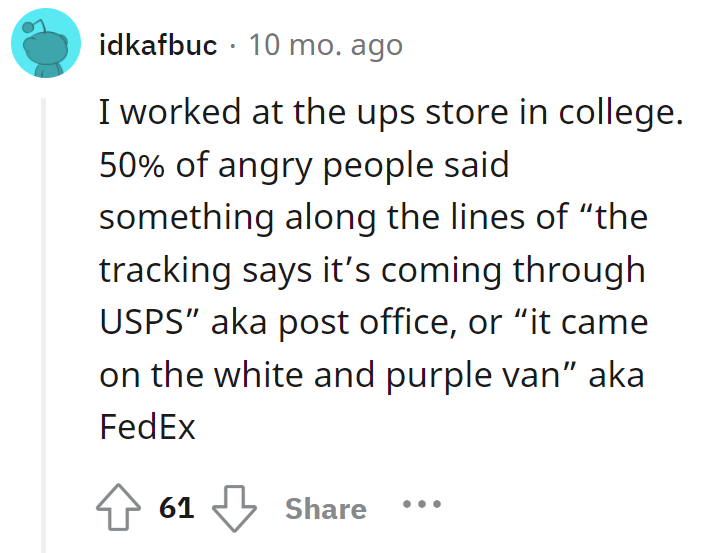 The statement, ‘people who lie, think everyone else lies too’ applies here. 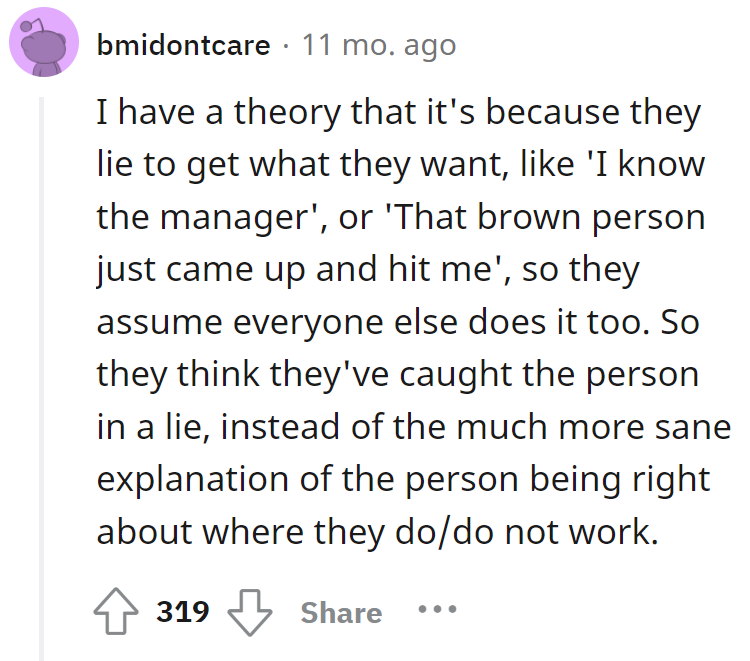 I will never be able to understand what goes on in the mind of a Karen. 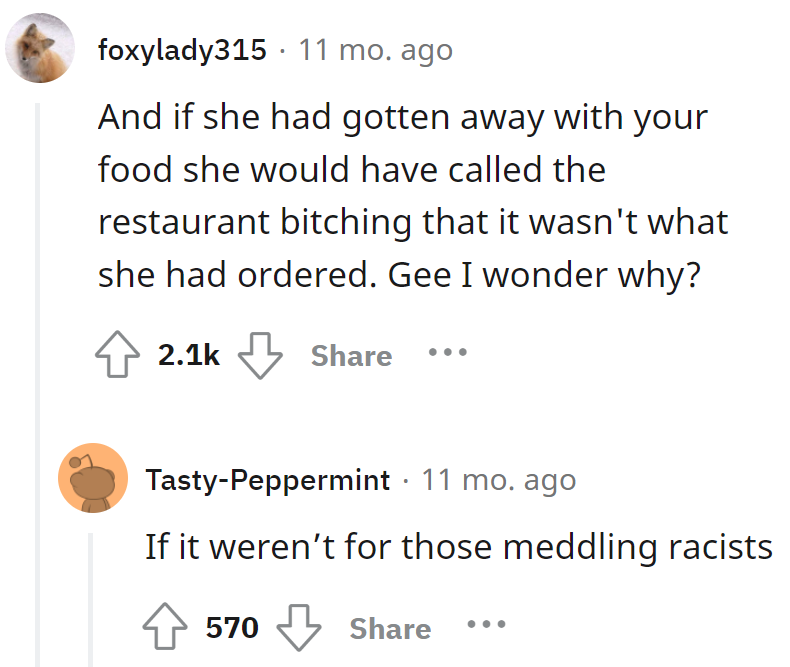 Has something similar ever happened to you? If not, if this does happen to you, what would you do? Would you simply,show her the food so she knows that it isn’t what she ordered or ignore her? Let us know in the comments down below.