Beware of the poop knife!

This world functions oddly. No one is aware of what is coming their way. For example, today you must have woken up and had breakfast. You went to work, or school if you are a student, and are expected to do the same work you do every day. Little did you know that you would read this article and learn that a poop knife exists.

Yes, you read it correctly. A poop knife.

This is something none of us ever imagined we would have to hear. It feels wrong to say that a knife is anyway linked to our bowel expulsions. But what can we do, this world is a weird place and all its weirdness is out in the open on the Internet. We get to experience the weirdest and most disgusting experiences of people.

A lot of things must be coming to your head. What on earth is a poop knife? Who created the poop knife? What is it used for? The world gained the concept of a poop knife after a post made by “LearnetButt” on Reddit. The user said, “I was 22 years old when I learned that not every family has a poop knife.”

The user straight away started with a blatant truth: “My family poops big.” That was a rather gross way to start a post, but the user took the risk.

“Our family had a poop knife. It was an old rusty kitchen knife that hung on a nail in the laundry room, only to be used for that purpose. It was normal to walk through the hallway and have someone call out ‘Hey, can you get me the poop knife?’”

“I thought it was standard kit. You have your plunger, your toilet brush, and your poop knife.”

I am grossed out at the fact that they hang the poop knife in their laundry room. This knife should be kept deep in some pit outside the house, far away from clean clothes. Moreover, the fact that they all used the same poop knife makes me want to cut off the internet and wipe away my memory. What is even more bizarre is that he is under the impression that every family owns a poop knife.

The user also narrates and an embarrassing story from when he was just 22 years old. He realized that not every brood requires and owns the rare “Poop knife”. Not everyone person requires a poop knife for his or her bodily functions.

With a story as bizarre as this user’s, it is bound to go viral. This story gained a lot of audience and people.

Now, you may be thinking that this person probably received a lot of backlash from the public. Unfortunately, more people came forward with similar experiences. Before you move forward with this article, I should warn you that there is an overwhelming amount of gross comments coming ahead. I just can’t fathom that a poop knife exists.

I am completely grossed out and crying in disbelief! 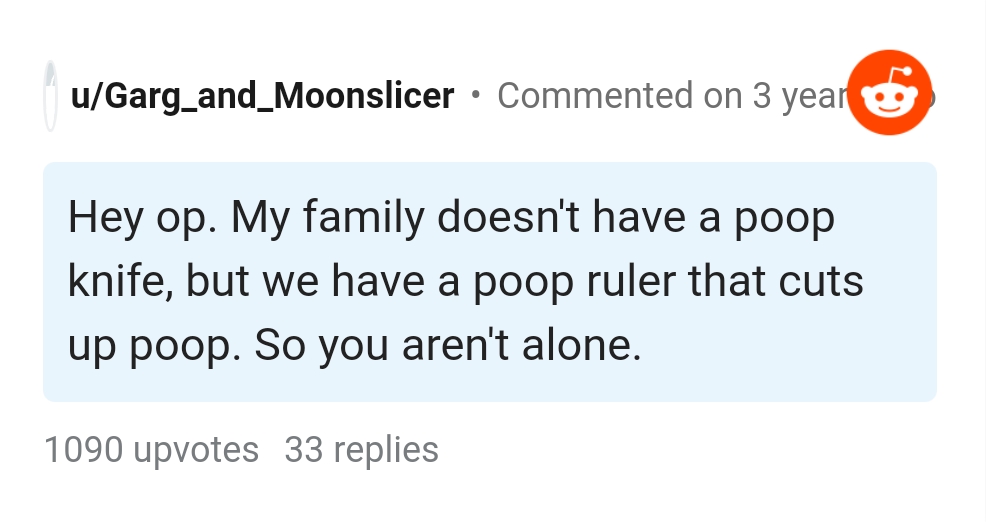 Excuse me, what? Poop Rule? This world is a mess of disgusting people.

I cannot believe I am reading this. I would never even think of using a kitchen utensil for any business that is done in the bathroom. They even gave a name to this forsaken thing!

Oh, what is more, barbaric is that we are all normal people have you all partaking in this gross behaviour!

I am at a loss for words. The only thing we can hope is that all these people collectively decided to prank us because there is no way I am believing that a PEE JAR exists. For God’s sake! 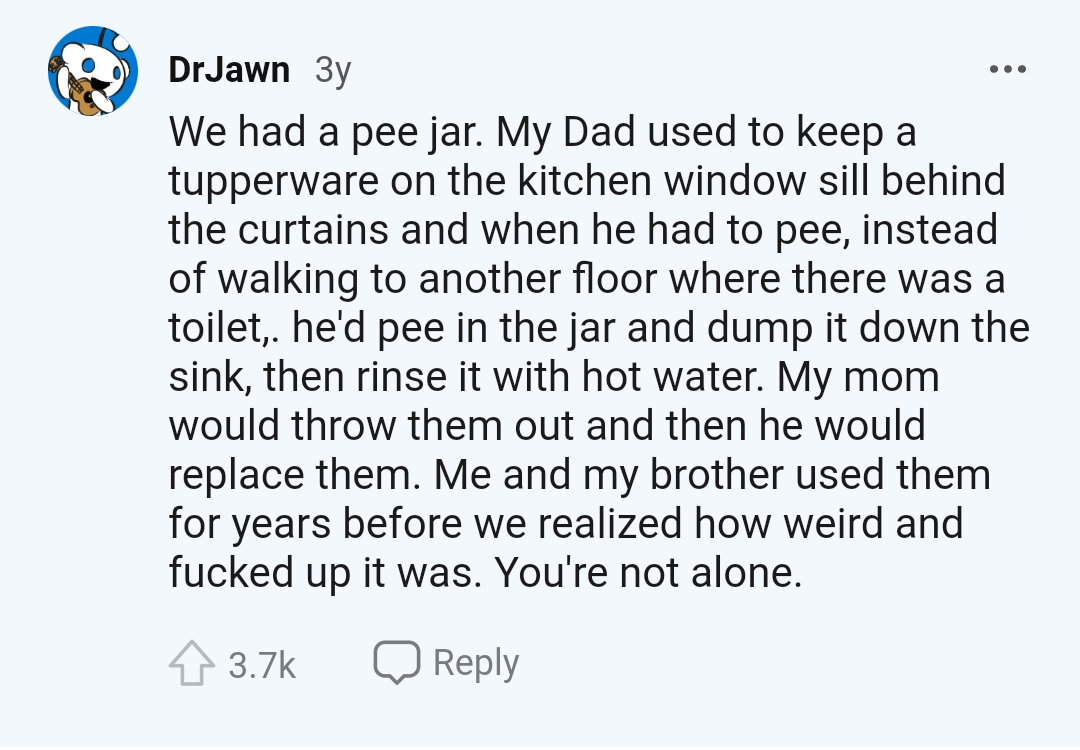 Well, at least he realized this was messed up.

I think we have reached the end of the world because this is our world at its absolute worst.

I do not think anyone needed to hear this ever. Period.

I am disgusted to the core. I have no words. These comments somehow make this whole thing even worse than it already was. The fact parents exist think their kids cannot go to the washroom on the second floor and need a pee jar, makes us realize how messed up people are. The concept of hygiene and cleanliness is lost on these people. God, they even share the poop knife. They all should be given a beginner’s course on cleanliness.

What do you all think of this? If any of you also think this is normal, you need to get checked by a doctor!