Nobody deserves to get married.

Marriage isn’t a thing you have to do just for the heck of it. It is a union of two people who promise to spend their life together through thick and thin. However, for some, it has become a sort of competition. It seems that some siblings think they should get married first just because they are older. This might make a lick of sense in an arranged marriage but it sure doesn’t when it comes to finding your own partner.

I mean who knows when a person will fall in love and when they themselves or their partner will propose? And some people find this love sooner while others find it later in life. So nothing is wrong either way. However, this sister apparently thought her little sister shouldn’t get married before her. I kid you not, this really happened in this day and age.

You don’t even need to read the whole story to tell who is the one in the wrong here. 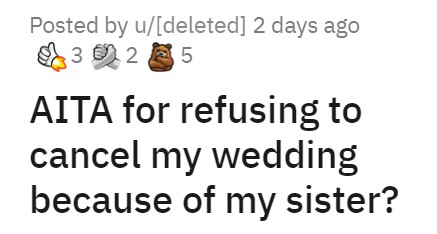 Sounds like a fairytale love that anyone will be lucky to have. 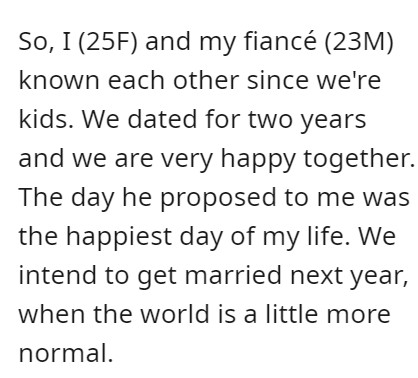 Honestly, what is the issue? When did age become such an issue? 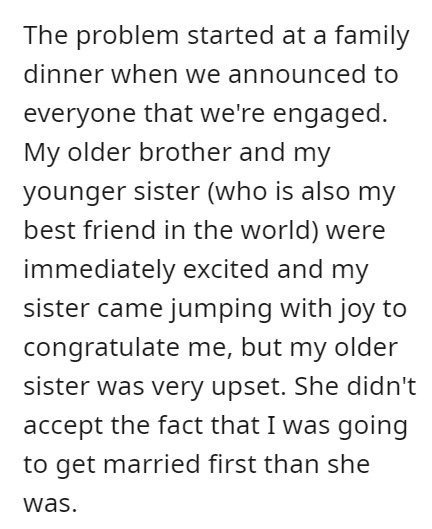 It’s not as if she is already in a relationship and close to getting married herself. This is straight-up crazy. 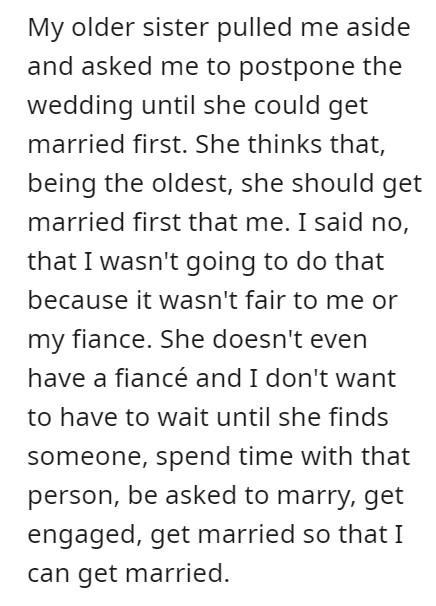 Sister doesn’t even have a boyfriend. It could be 5 years before she gets married, but what if she never does? Should OP and her brother and other sisters never get married too? Sister can pound sand. She’s an entitled AH who thinks everyone needs to plan their lives around her. No, just no. –WeeklyConversation8

Finding someone and falling in love with them can take years! It isn’t a game of a few months. 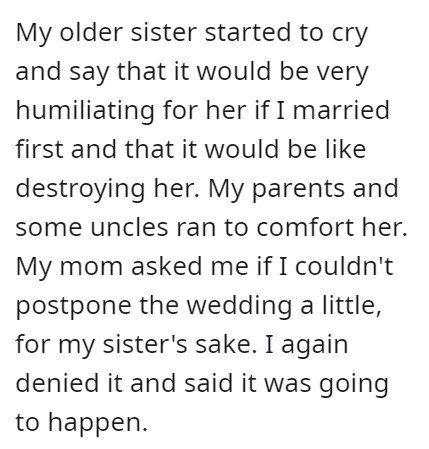 I don’t know what sort of family you have but they sound toxic. 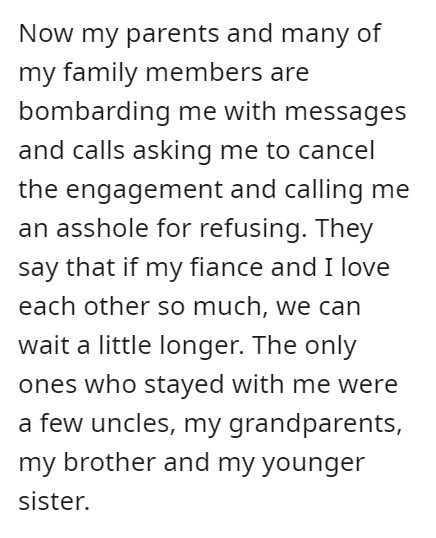 It is definitely not fair of her to ask you such a thing. She should grow up. 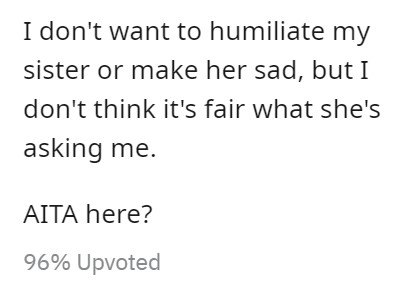 NTA in the slightest – you need to be 100% clear with your sister and your relatives that this is:

Family or not, no one has the right to ask you to withhold your personal happiness!

If you apologize at all for simply marrying the love of your life on your own timeline, your sister will likely make this an issue all the way up to the wedding, and may even try to sabotage your special day.

If you cave, you may likely have to wait another 10 years to marry your fiance seeing as how someone with your sister’s attitude may have a hard time finding a willing partner.

My older sister tried to get me to agree to this a long time ago before I was engaged or even in a serious relationship. She just whiningly asked me to “promise” her I wouldn’t get married first and I just laughed and said “Absolutely not, the only person this is more insulting to other than myself is you – stop embarrassing yourself and start living in the 21st century. What’s next, you want me to make sure my dowry will be less than yours?” –tidal_dragon

And honestly, who cares who gets married first? Her older brother isn’t making a fuss, is he? 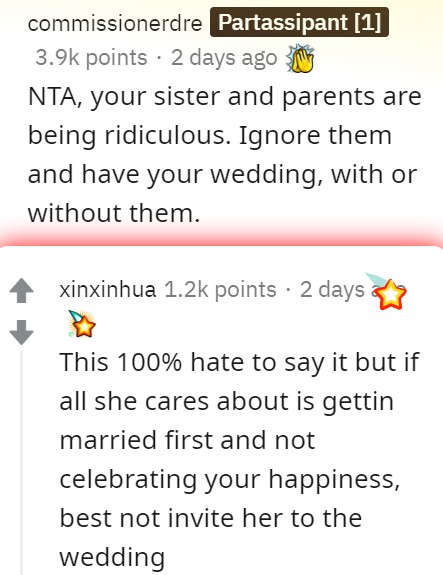 Inviting her to the wedding would be a big mistake. 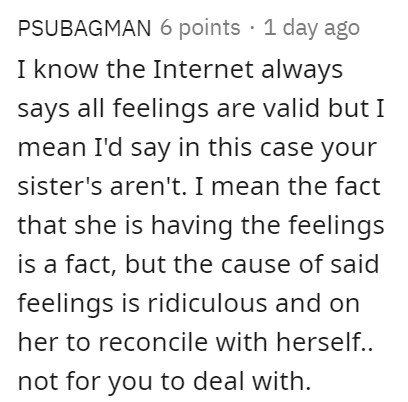 Exactly! It isn’t your job to find her someone! 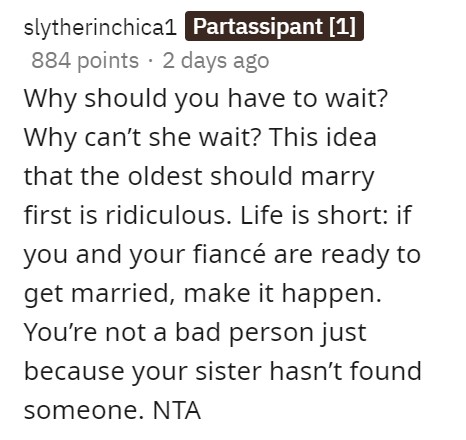 And she is being a huge brat right now who doesn’t deserve to come to the wedding. 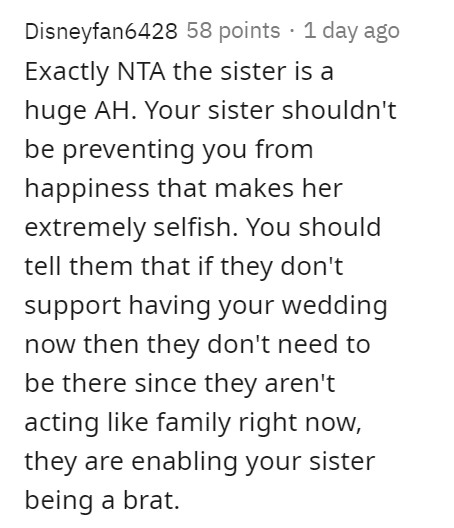 Nobody can tell you how to live your own life. 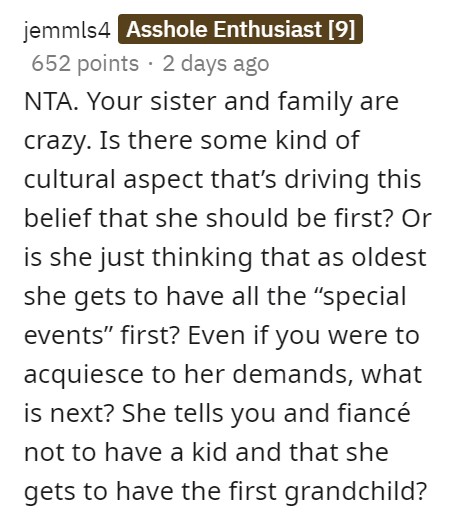 I would say this is dramatizing it but I have been on Reddit a few times too many. 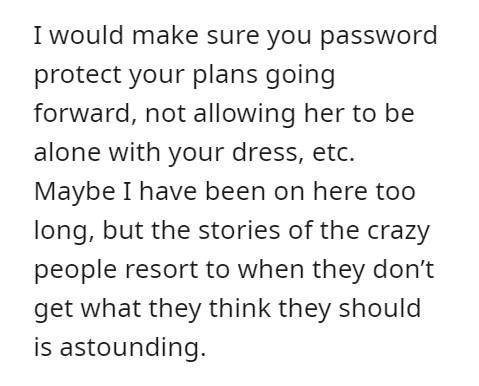 Does your family believe in something similar? If so is this a cultural thing? Comment down below and let us know.