We all have our own quirks.

Tendencies that make us different from each other. Some are weirder than most while others are perfectly normal. It just depends on the individual and what that person has gone through in their past. No matter how much we try to run from our past, it can leave an impression on us. And even with counselling, you can’t be sure that you won’t be left with a few ‘scars’. That is what this guy has.

He went through a lot of tough times when he was young. And he apparently had to sleep on an empty stomach many nights, so I can understand why that has left him obsessed with food. He is quite conscious about how much he cooks and what he puts in his body. But that isn’t where it ends, he especially doesn’t like it when someone eats off his plate. Now, I myself don’t like that either. I would rather just order more food for the other person than let them eat off my portion, but it is clearly not as extreme as this man.

You can scroll on below and read about why he is the way he is.

It does sound pretty awful when you first take a look at it, but he has an explanation. 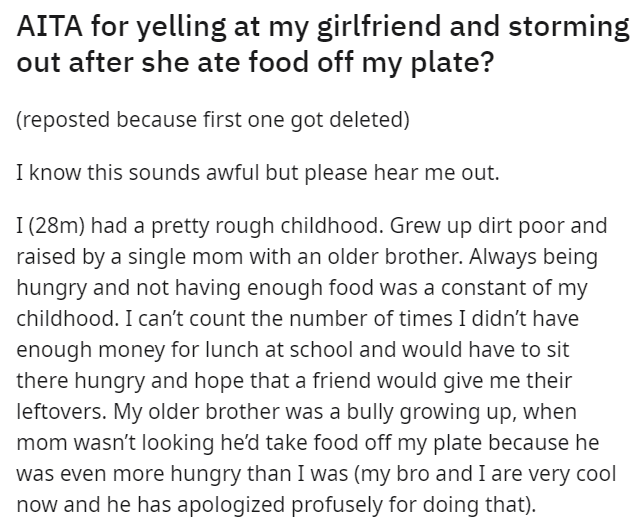 And I can definitely understand why he would be this way now. 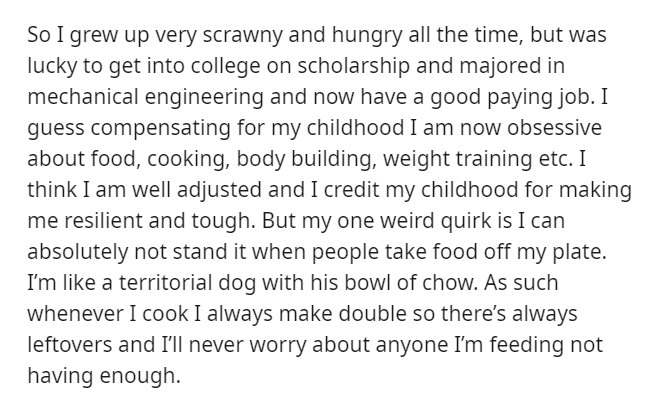 Honestly, If I know someone’s serious trigger, I wouldn’t make jokes about it. 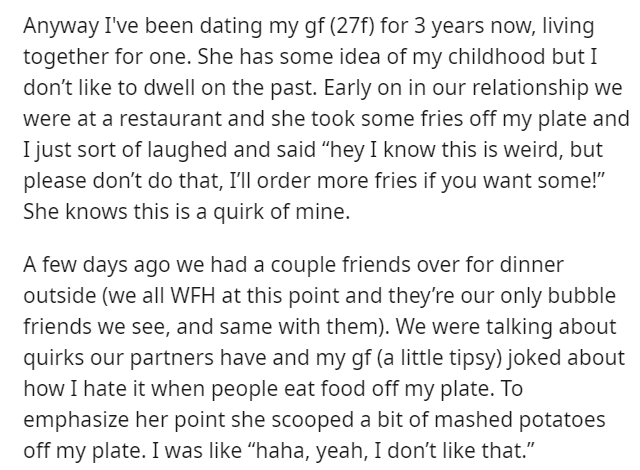 She was essentially make a joke of his past and that is never okay.

However, I can’t in good conscience say his reaction was okay either. 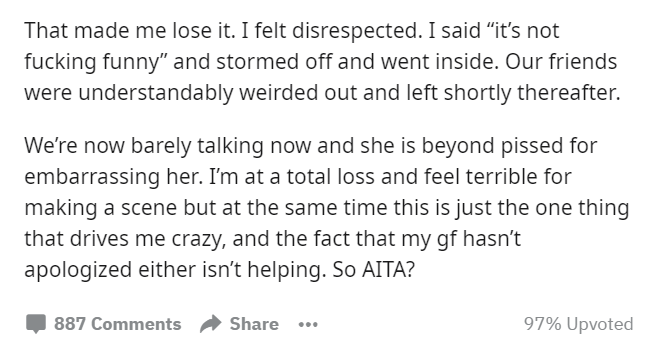 ESH. I grew up with food scarcity. I am also extremely food possessive. Anyone who has not experienced this will have no way to really get the emotional reaction, and it will seem like asshole behavior. I, too, would have felt disrespected by a partner who kept doing the thing that triggered those reactions and refused to listen. That she did it in front of friends almost feels like she made you the butt of a joke. So I get it. Really I do. But you crossed a line reacting as you did, again, especially in front of friends.

To me, though, it seems her behavior was alcohol influenced, the type of thing she felt safe doing because she was in a good mood and having fun, and because of that she wasn’t picking up on the severity of what you were feeling and the whole thing likely hit her straight upside the head as an extreme shock.

The thing is, we can’t control what other people do, only how we respond to it, and in this case your response is what made you also an AH and there are lesser steps you could have taken to avoid blowing up, even so far as getting the bowl of potatoes from the kitchen and putting it in front of her to make your point. –mentalmettle

Many people have triggers similar to this and nobody deserves to be made fun of for that.

Although as he mentions above, he doesn’t like to talk about his childhood much. 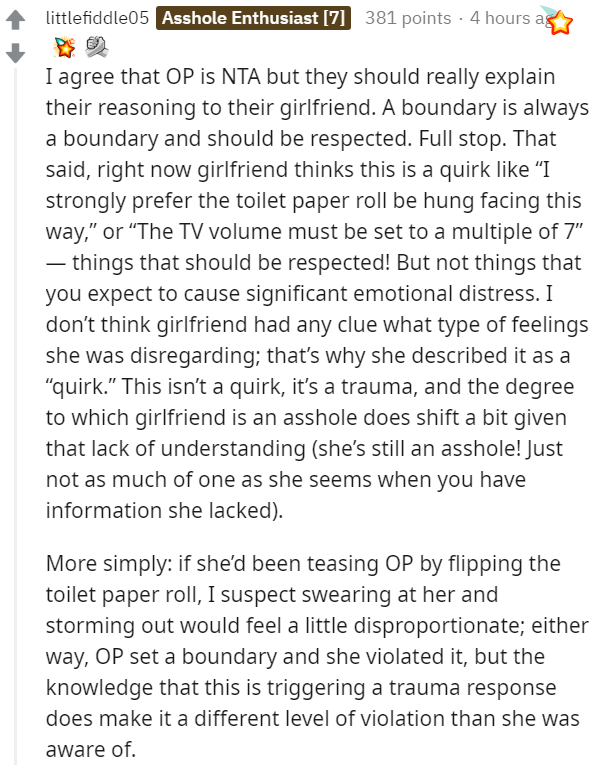 Which might be the reason she doesn’t understand the extent to which this behavior might hurt you.

To be honest, both of these people are not fully in the right. 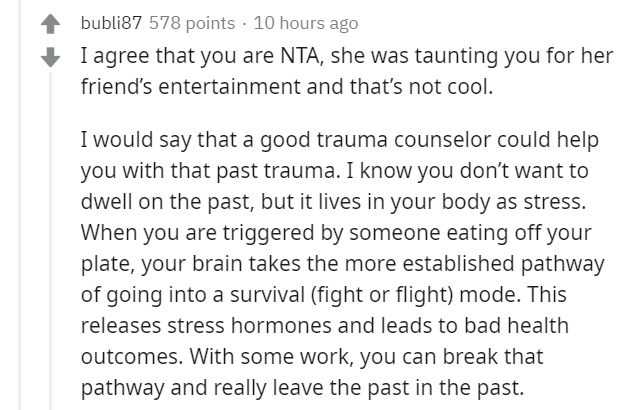 But nobody is fully in the wrong either. 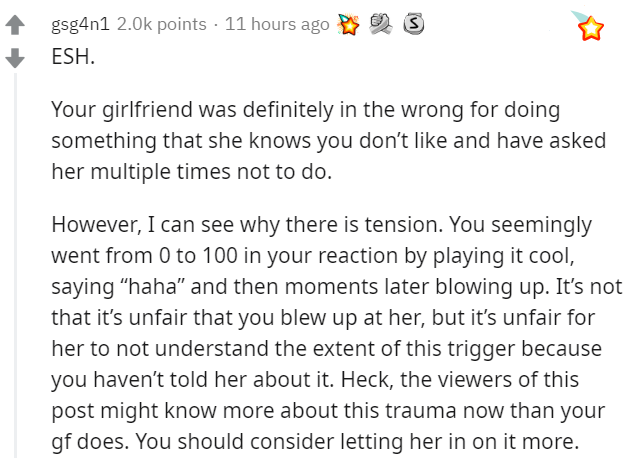 The fact that she kept disrespecting, not only your polite requests, but also your already established boundaries, was immature and childish.

Anyone willing to continue stepping over the line just for the sake of looking cool in front of other people is acting like an asshole.

My advice to you would be to talk to her and tell her precisely why you were upset, and see if you can make her understand. If she still refuses to see why she was in the wrong, then you might be better off just moving on and finding someone who is going to respect you when something bothers you. –miranda-adria

It is clear that the guy needs to go to counselling as that might help. 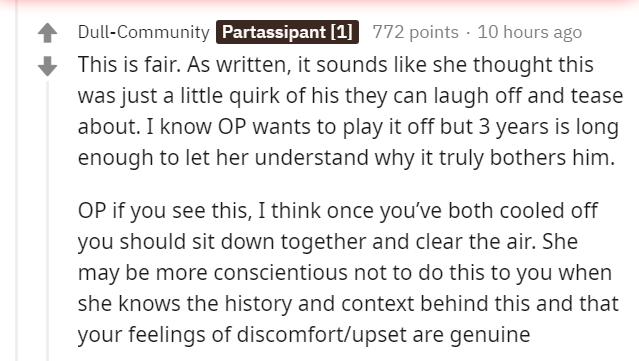 And he also needs to talk to his girlfriend to clear the air. 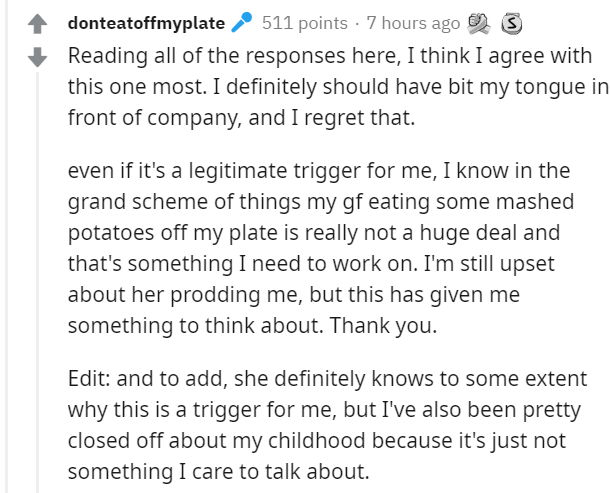 If he talks it through with her, she might understand his reasons. 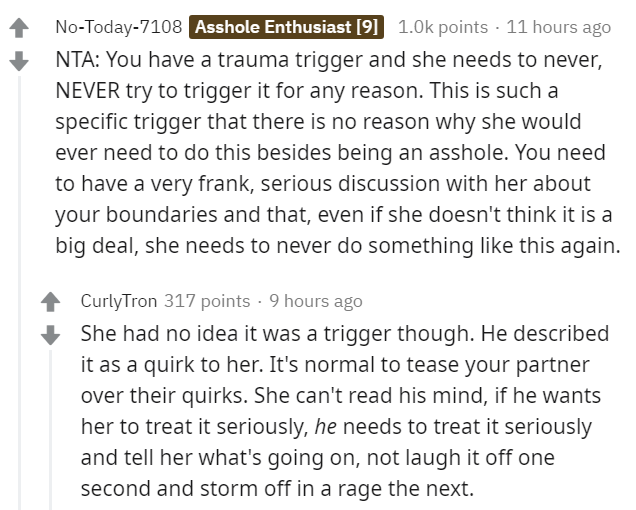 It might be ‘valid’ but still doesn’t make his reaction right. 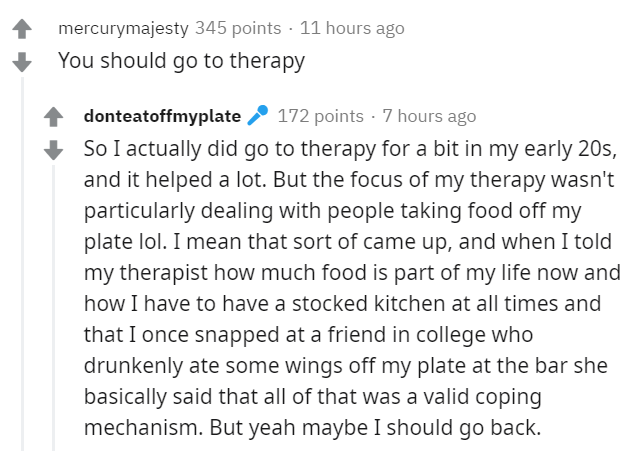 What are your thoughts on this? Do you think the girlfriend crossed a line? Or did he blow up for no reason? Comment down below and let us know.