Among the many different types of people exist people who always play the blame games. Such people never take responsibility for their own actions and blame all their failures and all their screw ups on others. Admitting that they were wrong or made a mistake is a hard pill to swallow for these people. So, they find it easy to blame everything on another person. When these people get involved with other types of behavioral issues, that’s when things go out of hand.

There are countless stories on Reddit about people who feel no shame in cheating and blaming things on others, but this one really stood out. It’s a story of a man who was cheating on his wife with another woman. So this happened on Halloween, a guy stayed at a hotel with a woman who was not his wife, of course. The next morning when he was charged for the room, he lashed out on OP who was there at the hotel’s front desk and started blaming him for ruining his marriage. As he was using a joint account with wife, so she would find out that he was cheating on her. Little did that man knew that the whole lobby full of people were a witness to his infidelity. Scroll down to read the whole thing.

Chad is about to explode. 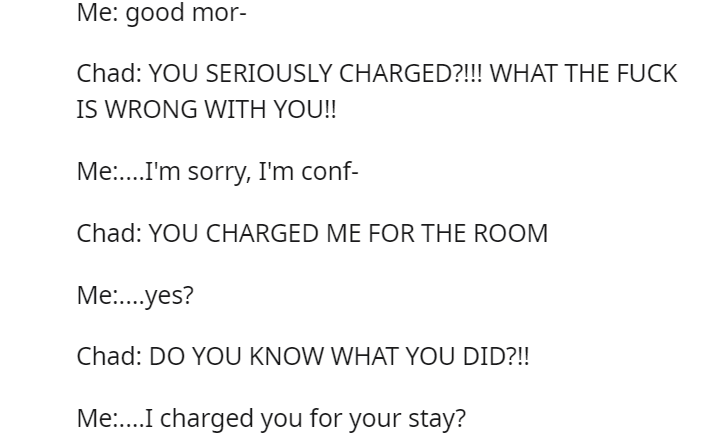 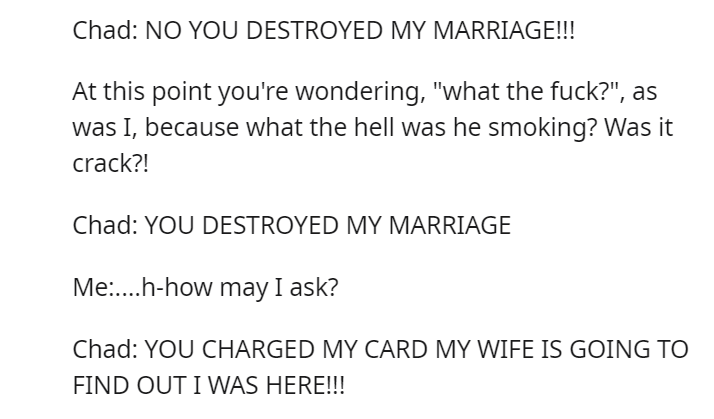 There is a different woman!! 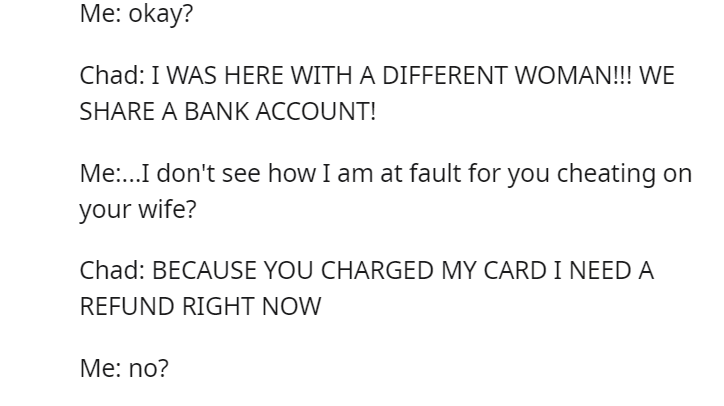 Is it a valid reason? 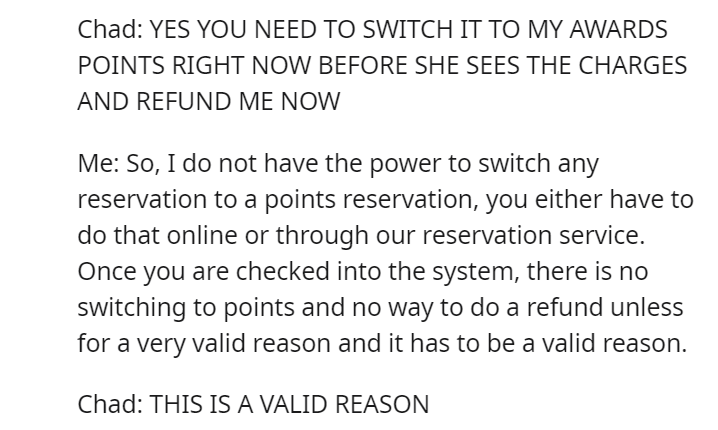 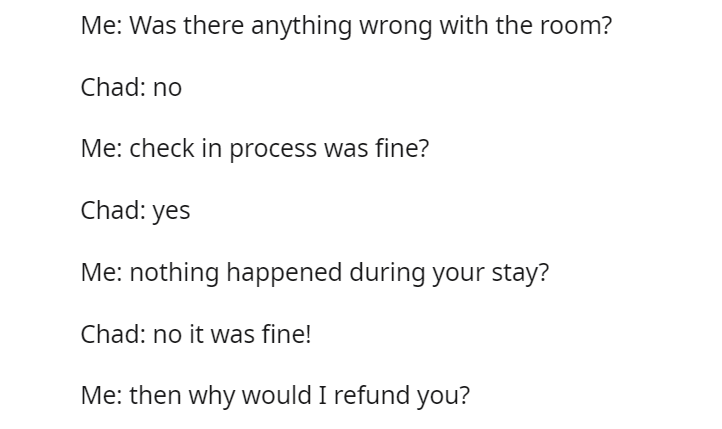 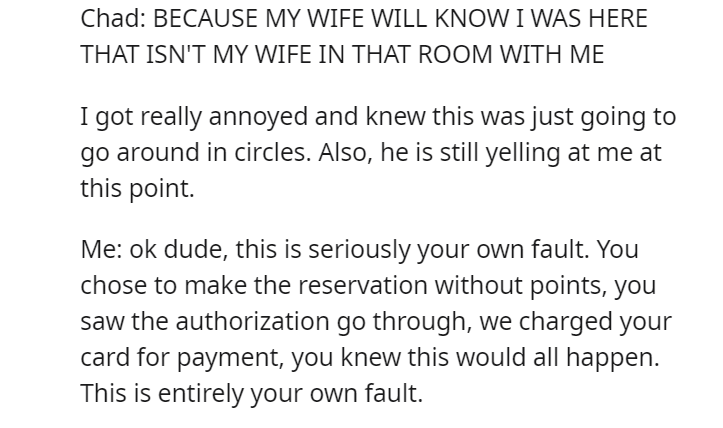 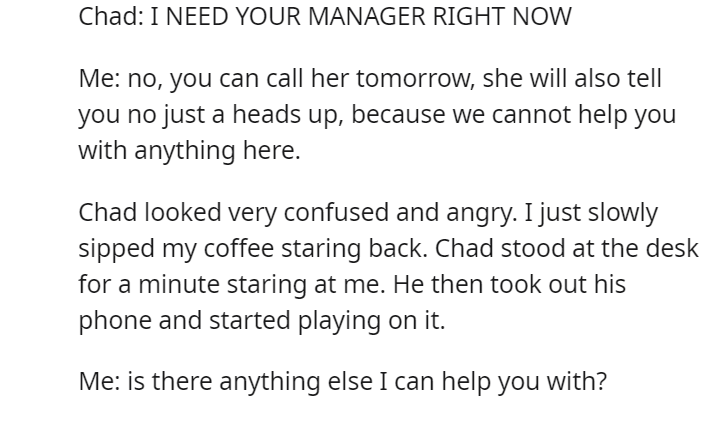 And that’s when Chad realized, he made a huge mistake. 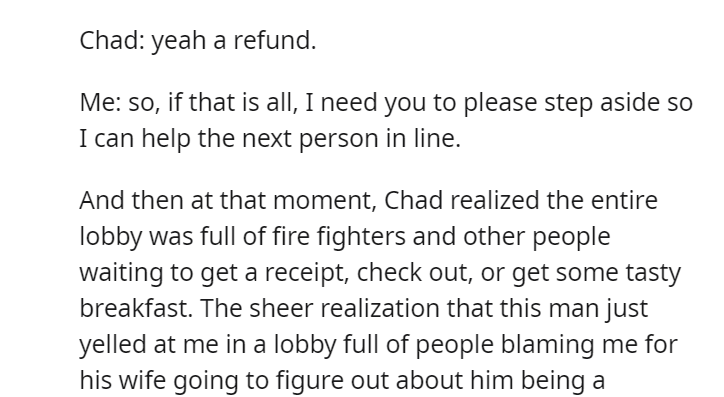 Chad’s a messed up man.

So, some people have fallen so low that they have the audacity to blame things on someone else while they are clearly the one who’s guilty. This guy is cheating on his wife and yet he’s dumb enough to pay for the room with his card. Wow! The wife’s gonna find out anyways, even if he gets a refund. On top of everything, it’s kind of hilarious that this guy told everyone that one big secret at the hotel lobby by making a fuss about it. Wondering where do such people come from? The way this guy’s blaming the OP for ruining his marriage is unacceptable.The marriage was screwed by Chad himself the moment he decided to cheat on his wife. Redditors are also not cool with Chad. They aren’t holding back from commenting about this situation. Scroll down and check them out. 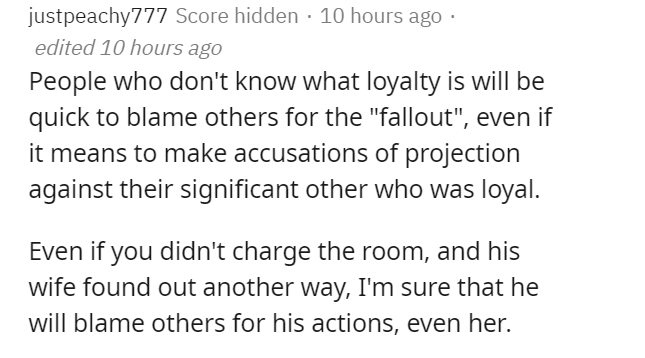 Some people are just worth letting go of… 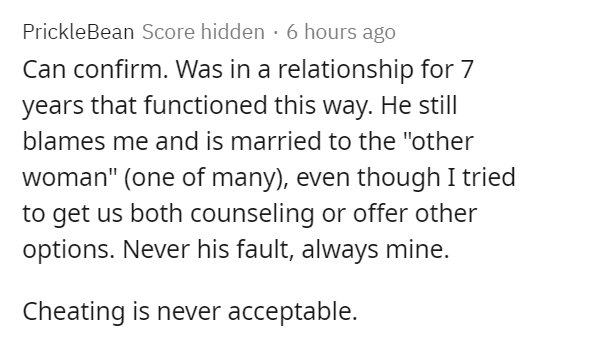 Loyalty is all he lacks. 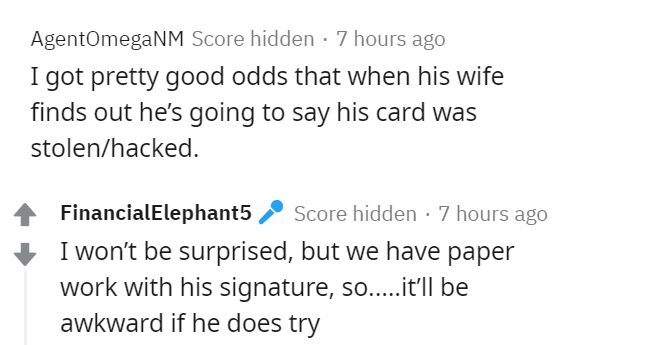 We’re all happy for OP here. 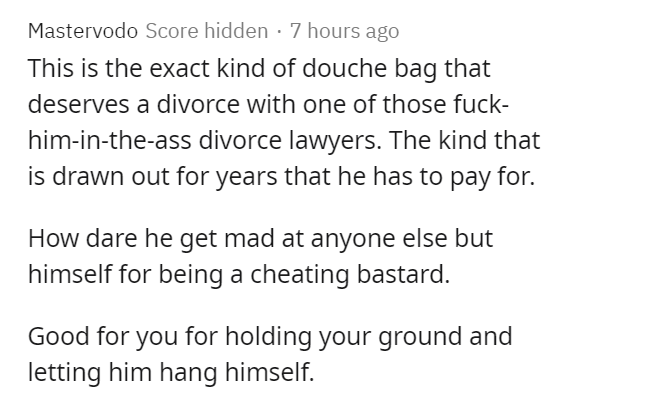 Honestly, people like Chad deserve to get caught in the most epic ways possible. There is no excuse for infidelity and cheaters don’t stand a chance. One way or another, they are not only exposed, but justice is also served. What are your thoughts about this matter? Let us know in the comments below.