Black is a very flattering color.

And no matter what people say ‘black will always be the new black’. However, that does not mean a house with black walls and black ceilings would look particularly good. I mean it might be a cool effect but I have to imagine it would really dampen the mood of anyone who is living there. Don’t get me wrong, it is everyone’s teenage dream to have a black room but things aren’t always how we imagine.

We are also well aware that black is very hard to get out f clothes or walls. So if you want to have the ultimate revenge on your landlord, painting their whole house black is the way to go. This isn’t the first time this has happened and it probably won’t be the last. You can scroll on below and take a look at what incited the tenant’s wrath on the landlord.

First, we get a bit of background on why they wanted to move out in the first place. 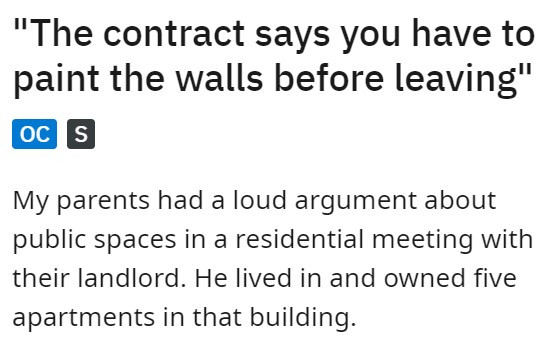 The landlord probably should have mentioned which color. 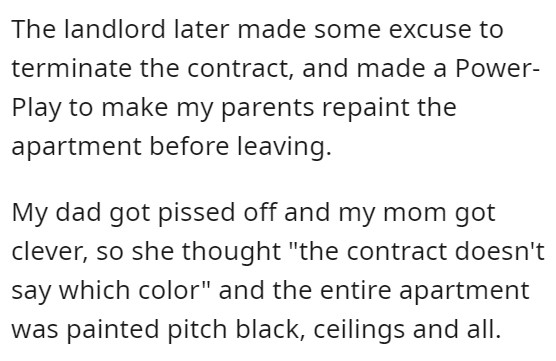 I can imagine that it would have given off a cool but eerie effect.

I really want to know what the landlord’s reaction was to see the house. 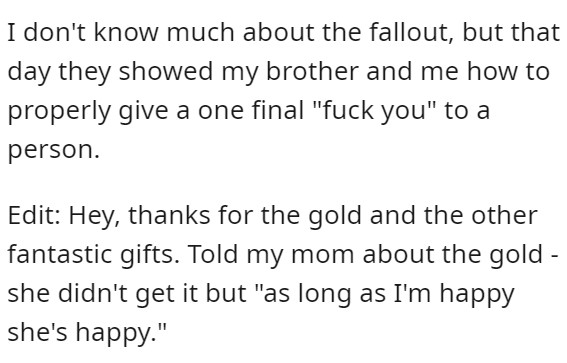 Why am I not surprised by this? 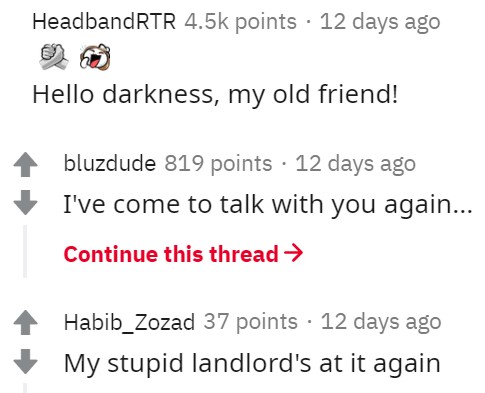 Do landlords not use Reddit? They should know not to mess with people by now. 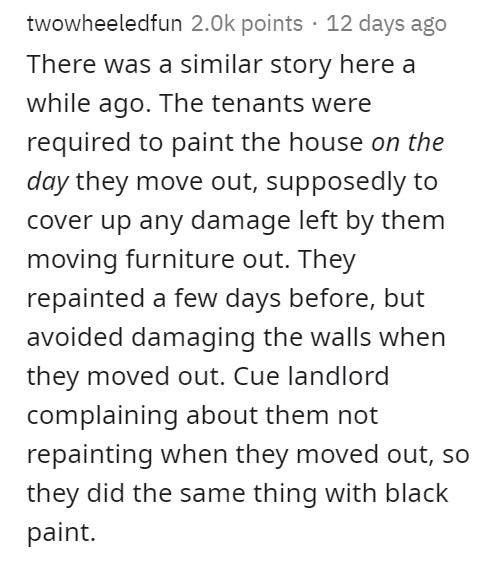 A funhouse with a touch of horrific ‘secrets’ thrown in there. 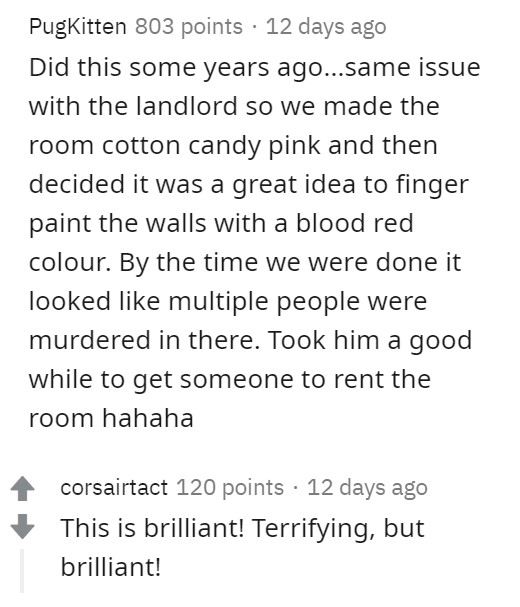 I have to read this book now. 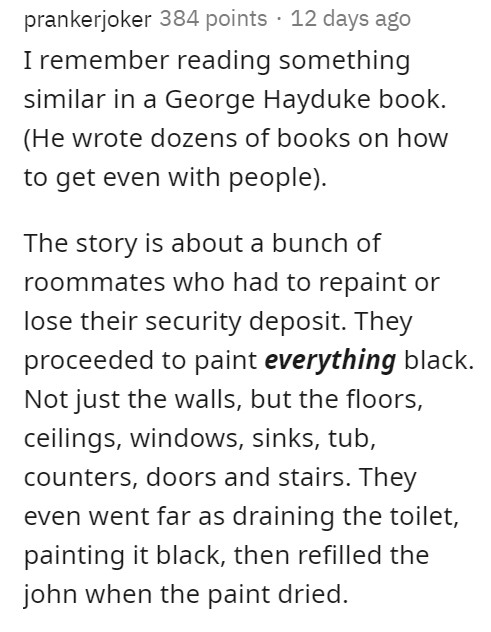 Vantablack would look awesome. However, it really would not be worth it. 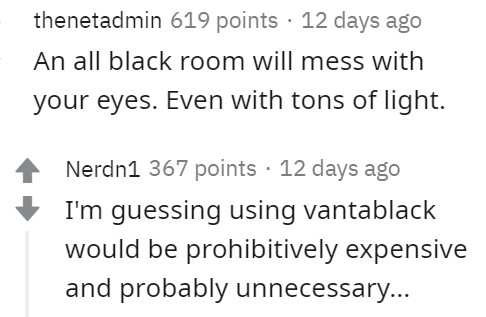 That must have taken a lot of effort. 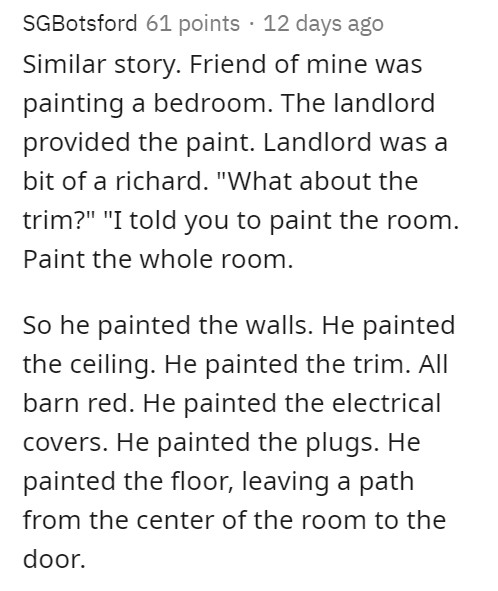 I bet his mom regretted ever forcing him to do that.

This reminds me of a friend of mine. His family had just moved into a new house and his mom insisted on repainting every room. His room was already like a plain blue or something fairly basic for a bedroom and plus he was moving out for college in less than a year, so he didn’t think he needed to paint it.

His mom pitched a fit (she’s a Karen through and through) She demanded that he pick out a color or she was going to pick one and paint it herself. So he did. He’s a Clemson fan so he went to Lowe’s and got the brightest neon shade of orange he could find and painted the entire room. It was gloriously hideous. Imagine standing inside a traffic cone. If he left his door open the entire hallway would glow orange. –SeriouslySherlock

But I can’t say the landlord didn’t deserve it. 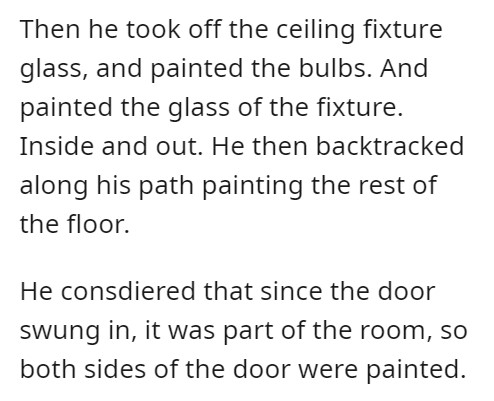 He was well within what he was told to do. 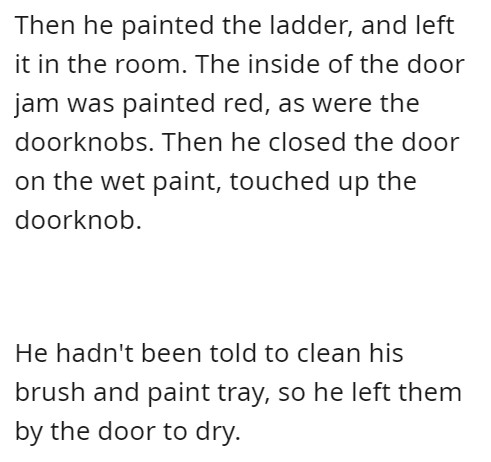 Have you ever done something similar? Comment down below and let us know. Don’t forget to share it with your friends as well.